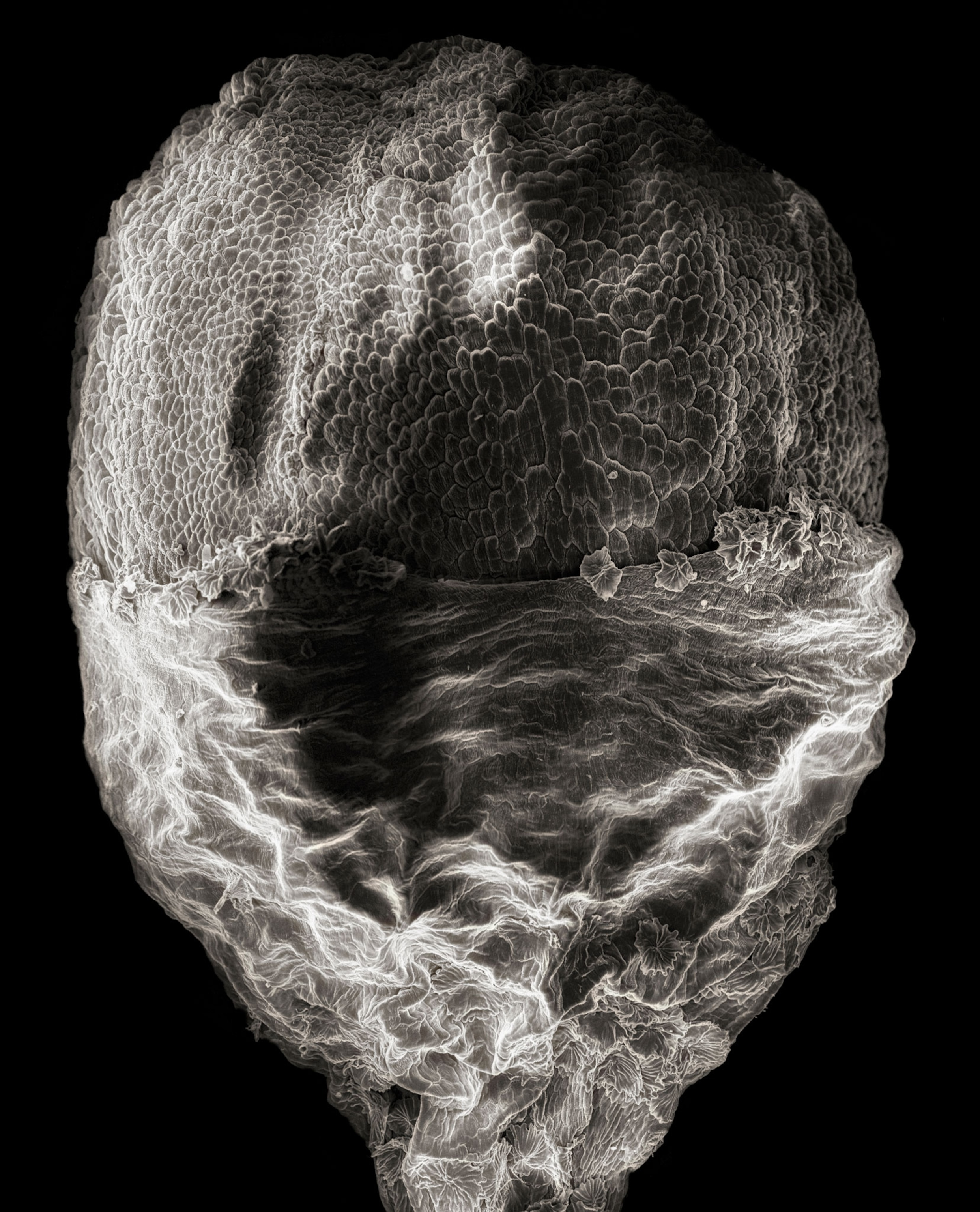 The hidden beauty of the plants that feed the world

Seen through a microscope, a cornucopia of common crops offer lessons on new techniques for making agriculture more sustainable.

Pizza lovers no doubt will appreciate the flower bud of the arbequina olive tree, seen here at 80-times magnification, which grows the luscious black olives popular at restaurants. Olive trees are a perennial, woody plant capable of long-term carbon sequestration. The International Olive Council says they olive absorb 11 kilograms of CO2 per liter of olive oil produced. In many parts of the world, olives are a staple food, but climate chaos can wreak havoc on groves. Italy grows over 500 varieties, and its olive oil industry was worth more than three billion euros in 2017. Then, in 2018, the industry crashed. Freak cold, heat, and rain events weakened trees, which were harmed further by the spread of an invasive tropical bacteria. Thousands of trees, some as old as 1,400 years, were removed in an attempt to block the spread of this scourge. In Morocco, some growers are planting olive trees on hillside terraces to reduce erosion and using drip irrigation to bring water to the trees. Spanish missionaries planted olive trees in California during the 18th century, and they’ve thrived, producing mostly table olives. Warming temperatures, unpredictable weather, and increasing wildfires are also prompting growers to plant dozens of olive cultivars to the north, in Oregon. Boutique olive oil producers there hint at a possible northward shift of food production in North America.
Scanning Electron Microscope photograph by Robert Dash

From the salad course to dessert, most of the foods on your plate can be traced back to carefully cultivated plants. Even the meat you eat likely comes from animals fed parts of crops, passing energy harvested from the sun up the global food chain.

But modern agriculture exacts a huge environmental cost. Crops such as corn and soy are often grown in large monoculture farms that are maintained with fertilizers and pesticides made using fossil fuels. Slash-and-burn practices can decimate carbon-capturing forests and pump excess carbon dioxide into the air. Heavily tilled soils destroy fungal networks that otherwise bind the dirt, wasting already drought-stressed water supplies and contributing to erosion. These are just a few of the ways that our food systems are tied to climate change. Recent estimates peg agriculture's total share of greenhouse gas emissions at over 30 percent.

To help mitigate this problem, on September 23, the UN Food Systems Summit will highlight sustainable solutions for agriculture during the virtual event. The goal: “Everyone, everywhere must take action and work together to transform the way the world produces, consumes, and thinks about food.”

As part of a move toward more sustainable farming, an increasing number of food producers and investors are embracing advanced methods, as well as some used in the distant past, loosely described as regenerative agriculture. These practices—such as boosting plants' genetic diversity and planting "cover crops" that fix nitrogen from the atmosphere and add it to the soil—can help improve soil health and return more carbon to the earth.

As a teacher, photographer, and lifelong fan of nature writ small, I explore fascinating connections between the food plants we depend on and their climate threats or solutions. Using a scanning electron microscope to zoom in for the tiniest views, I seek awe and enchantment to help people better understand today’s ecological breakdown and perhaps encourage them to work to reverse it.

A version of this story appears in the February 2022 issue of National Geographic magazine.