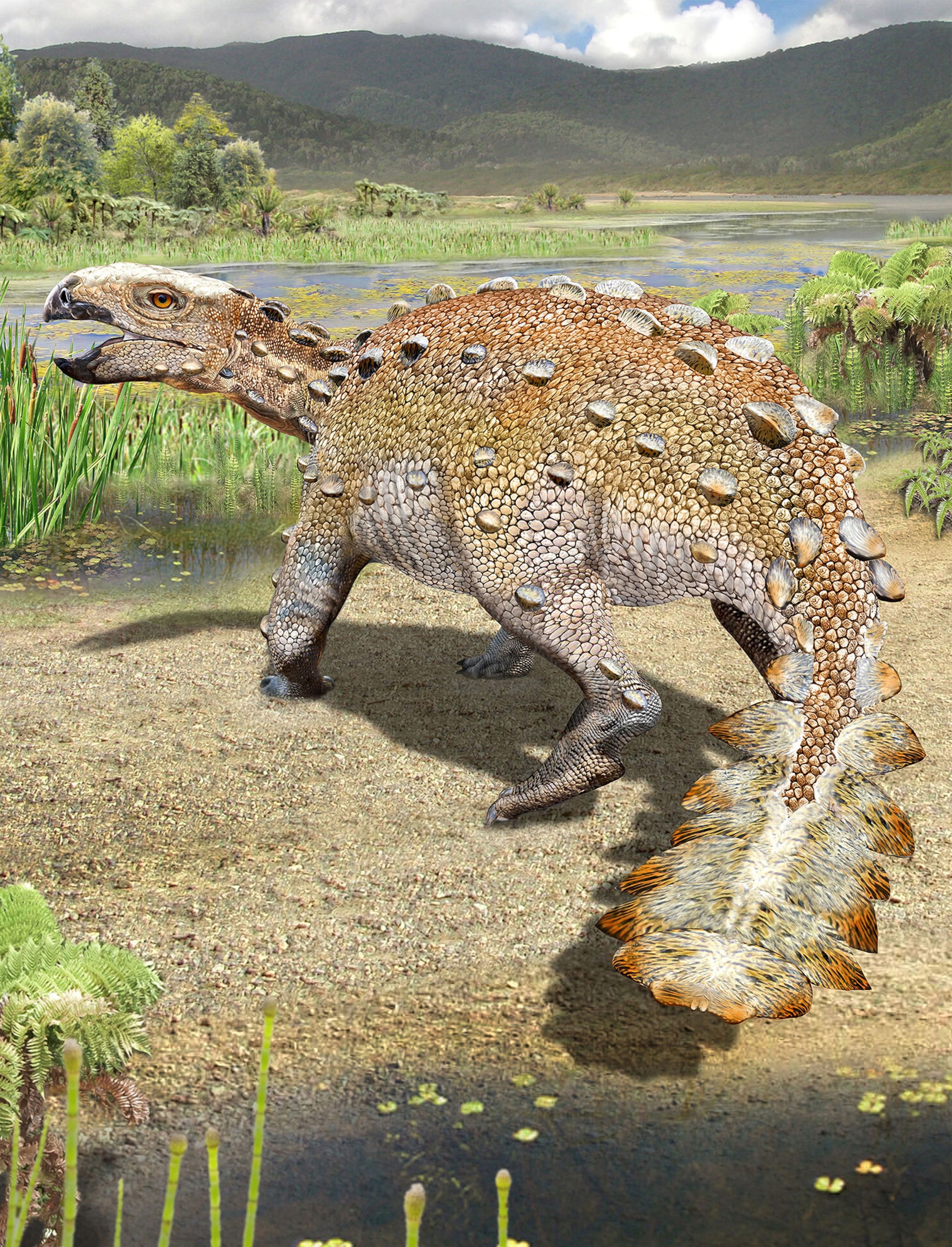 This bizarre armored dinosaur had a uniquely bladed tail weapon

The fossilized creature, found in southern Chile, has a strange blend of features resembling both ankylosaurs and stegosaurs.

About 73 million years ago in what's now southern Chile, a newfound species of club-tailed dinosaur lived and died in a river delta rich with plant life, shown here in this artist's depiction.
Illustration by Mauricio Álvarez

Between 75 and 72 million years ago in what is now Chilean Patagonia, the carcass of a stubby-tailed dinosaur somehow ended up buried in a river delta, where the fine sediments exquisitely preserved the bones as they fossilized.

By dinosaur standards, this creature wasn’t huge. As it walked about on all fours, it stood less than two feet tall and spanned less than seven feet long, snout to tail. But it was a tough little animal in a world of giants. The dinosaur had armor-studded skin to defend itself—and a unique weapon bringing up the rear.

The end of this creature’s tail was unlike anything scientists have seen before: a mass of fused bone resembling a jagged cricket bat. “It’s entirely unprecedented,” says Alexander Vargas, a paleontologist at the University of Chile.

The fossil skeleton, unveiled today in the journal Nature, belongs to a newly discovered type of armored dinosaur called Stegouros elengassen. The creature is named for its bizarrely shingled “roof tail” (Stegouros) and an armored beast in the mythology of the Patagonian Aónik’enk people (elengassen).

Beyond its novel weaponry, Stegouros also fills in a major evolutionary gap. According to University of Maryland paleontologist Tom Holtz, who wasn’t involved with the study, very few armored dinosaurs have been found within the lands that once made up Gondwana, the ancient supercontinent that’s now split up across South America, Africa, Antarctica, Australia, the Indian subcontinent, and the Arabian Peninsula.

Before Stegouros, only two armored dinosaurs had been found in what was once southern Gondwana, and those animals are known from incomplete or partially studied fossils. The Stegouros specimen is about 80 percent complete—and the skeleton is a bizarre anatomical mosaic. The dinosaur’s skull, teeth, and club-like tail are classically ankylosaur, resembling Ankylosaurus and other late armored dinosaurs. However, the dinosaur’s slender limb bones and pelvis resemble those of stegosaurs such as Stegosaurus, which had been extinct for tens of millions of years by the time of Stegouros.

“If you had shown me this pelvis and you asked me: What animal is that from? I’d tell you 100 percent that it’s stegosaur,” says Susannah Maidment, a dinosaur paleontologist at the Natural History Museum, London, who was not involved with the study. “I’m absolutely blown away by this specimen … It throws everything that I know off.”

Bones in the mountains of Patagonia

Stegouros emerged from the Dorotea Formation, layers of rock spread across Chile and Argentina where researchers from around the world frequently search for dinosaur fossils and other signs of ancient life.

In 2017 a group from the University of Texas at Austin visited a site in Chile’s Río de las Chinas Valley that’s known for fossils and spotted some interesting-looking bones. In February 2018, the University of Chile sent a team to investigate the Texas group’s report, led by Vargas’s colleagues Sergio Soto-Acuña and Jonatan Kaluza.

The researchers found the first signs of bones at the top of a steep hillside and set to work digging around the fossil. The team took the remains back to the lab in a large, plaster-coated stone block, but getting the fossil out unharmed was a huge challenge. The scientists had to contend with near-freezing temperatures, the threat of hypothermia, and sprained ankles.

At first, researchers could see only the dinosaur’s slender limb bones, leading the team to think it might be an ornithopod—a kind of bipedal, plant-eating dinosaur. But once the fossil was in the laboratory, careful cleaning of the rock exposed the dinosaur’s tail.

“The rest of the day, I was in shock,” Vargas says.

Fully weaponized tails are rare among animals, but when they pop up, evolution has sculpted them into highly effective forms. Among the dinosaurs, stegosaurs had two pairs of spikes at the end of their tails (sometimes informally called “thagomizers,” after a classic Far Side cartoon). Some ankylosaurs such as Ankylosaurus had long, stiff tails with bony, hammer-like clubs.

But the tail of Stegouros is unique. Flatter and more knife-like than its peers’ tail weapons, the anatomical structure was named the macuahuitl by the research team, after the obsidian-bladed wooden club wielded by the Aztec.

Armored dinosaurs likely used their tail weaponry primarily for combat within their own species, possibly to jockey for social status. There’s also evidence that, when threatened, these dinosaurs employed their tails to defend themselves against predators. Holtz says that some bones of Jurassic predators have puncture wounds that may have come from run-ins with stegosaurs. And Canada’s Royal Ontario Museum has a tyrannosaur fossil with a broken, healed shin—possibly a wound from a tail-swinging ankylosaur.

Exactly how Stegouros used its tail remains unclear, but Holtz speculates the dinosaur could have wielded it as a sort of slashing weapon. What’s more clear is some of Stegouros’s potential predators. The largest predatory dinosaurs in Stegouros’s time and place were enigmatic dinosaurs called megaraptorids, which Vargas describes as “pretty nasty-looking, pretty large things, like an Allosaurus with longer, grasping arms.”

Once the Chilean team could see all of Stegouros’s skeleton, Soto-Acuña and Vargas carefully compared the animal’s anatomy to that of other armored dinosaurs. When the researchers crunched the numbers to generate likely family trees, they found that the ancestors of Stegouros had branched off from the rest of the ankylosaurs by roughly 165 million years ago, forming a previously unknown lineage.

The Chilean dinosaur’s closest known cousins are the two other known ankylosaurs from southern Gondwana. One of them, the Australian ankylosaur Kunbarrasaurus, is known mostly from its skull. The other, Antarctopelta, is known only from a few bone fragments found in Antarctic sediments.

Stegouros may help scientists make sense of these poorly understood relatives. Some of the isolated bones from Antarctopelta bear a striking resemblance to the fused bones of Stegouros’s macuahuitl. Vargas and his colleagues believe this match could mean that Antarctopelta—which grew twice as long as Stegouros—had a similar tail weapon.

Maidment of London’s Natural History Museum, one of the world’s leading experts on stegosaurs, adds that Stegouros’s strange blend of features could cause some “jiggling around” within the armored dinosaur family tree. Dinosaurs are labeled as stegosaurs based primarily on whether they have three key anatomical traits—one of which is the exact kind of pelvis seen on Stegouros, which isn’t a stegosaur, despite its similar-sounding name. As a result, Maidment says that some fragmentary dinosaurs currently classified as stegosaurs might not be stegosaurs at all.

The Dorotea Formation and other parts of Patagonia have yielded extraordinary fossils for decades, and the region likely has more fossilized clues hidden in the rock. Future expeditions within Chile or Argentina may even find other armored dinosaurs with flat, bladed clubs for tails.

In the meantime, Vargas and his colleagues are just getting started in their search for Stegouros fossils. “We’ve found other spots that have Stegouros—it’s actually common,” Vargas says. “We hope to find more.”