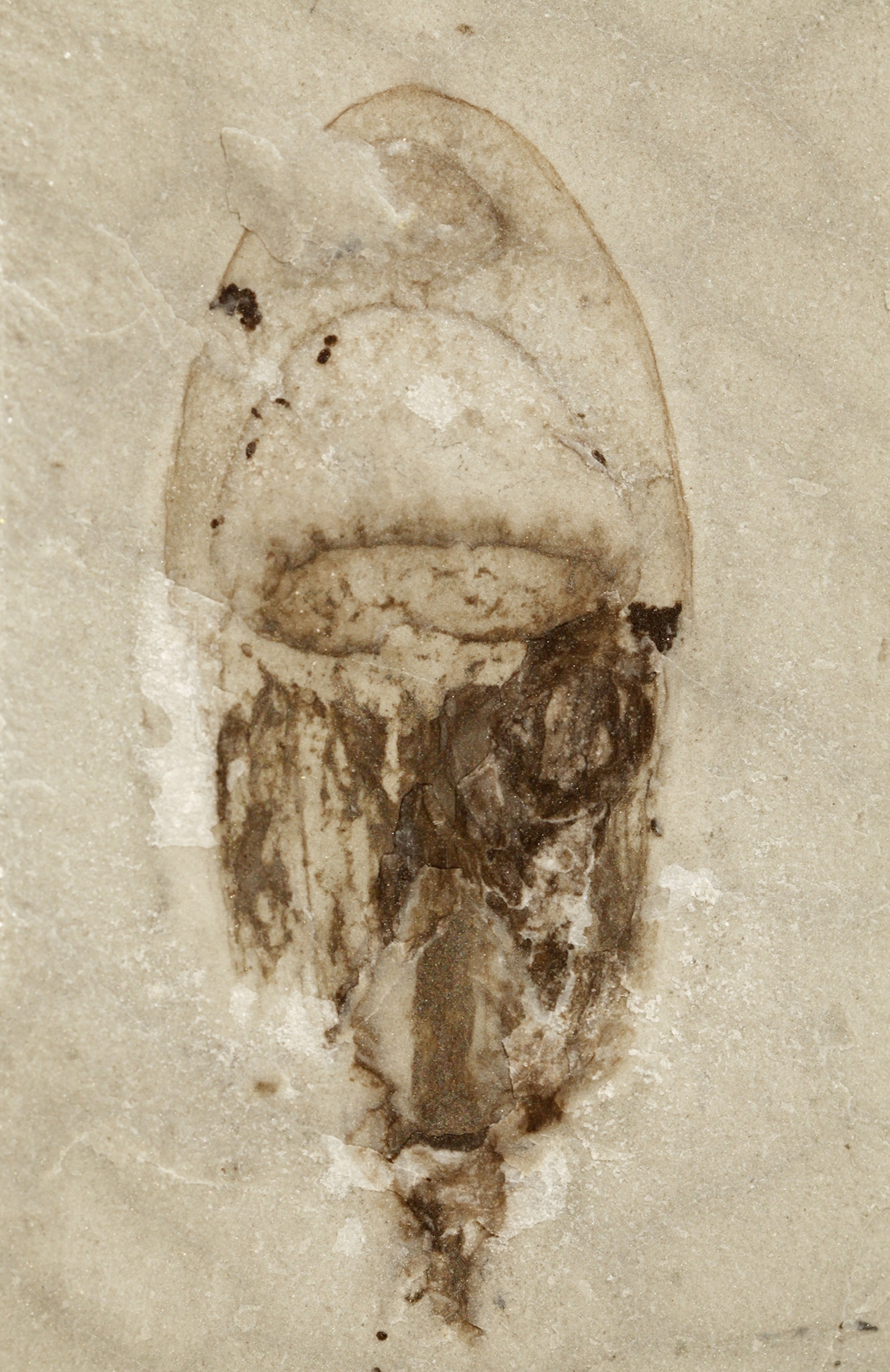 Animals from 518 million years ago are preserved down to their softest features, and more than half are new to science.

Frozen in time, a distant relative of modern jellyfish is preserved down to its bell and tentacles.
Photograph by Ao Sun

A wealth of ancient remains found by chance on the banks of a river in China are some of the most astoundingly preserved fossils now known on Earth, researchers report today in the journal Science.

The 518-million-year-old site, called Qingjiang, joins just a few places around the world where fossil preservation is so extraordinary, it captures even soft-bodied animals. Called Lagerstätten, these special types of deposits include Canada's famous Burgess shale, which dates to 507 million years ago, and China's Chengjiang locality, which formed at about the same time as Qingjiang but in shallower waters.

“Most fossil localities throughout all of time are going to preserve the shelly things, the hard things ... [but] what these localities give you is anatomy,” says Harvard paleontologist Joanna Wolfe, an expert on Cambrian life who wasn't involved in the study. “These are the best of the best.”

The Qingjiang site preserves even the tiniest details of this comb jelly, including the "comb rows" down its sides.

So far, researchers have identified 101 animal species in the remains, and more than half of them are brand-new to science. “I can see a bright future,” says lead study author Dongjing Fu, a paleontologist at Northwest University in Xi'an, China. “Qingjiang will be the next Burgess shale.”

The discovery adds substantially to our knowledge of the early Cambrian period, when animal life exploded onto the scene in spectacular fashion. In just a few tens of millions of years, complex marine ecosystems sprung up all around the world, teeming with creatures that form the base of today's major animal groups. It's thought that many factors triggered this unprecedented radiation of species—from new shallow marine habitats to the evolution of DNA regulation, which enabled the formation of segmented body plans.

“To find a site where over half is brand-new is pretty unexpected—we felt that we had a pretty good handle on diversity at this time,” says University of Lausanne paleontologist Allison Daley, an expert on Cambrian creatures who wasn't involved with the study. “It's really, really exciting!”

Fu and her coauthor Xingliang Zhang, Fu's former Ph.D. advisor, found the site in the summer of 2007 while combing through the rocks of southern China for fossil material. Fighting the summer heat, Fu and Zhang were walking along a river when they happened to see some promising shale on the riverbank. When they started digging, they immediately found an eye-catching fossil: Leanchoilia, a shrimp-like creature known from other Cambrian sites.

Now, after four field seasons, Fu and Zhang's team has a pretty good sense of what it'd be like to go back in time and swim through this ecosystem. For one, the jaunt into the past might feel like an undersea version of Gulliver's Travels—you'd by far be the biggest animal in the deep. Life at Qingjiang topped out at about six inches long, if that.

As you floated along, a rich undersea drama would play out in front of you. Trilobites would scuttle across the ocean floor past primitive sea anemones gripping the bottom with their fleshy holdfasts. Branching algae and about 20 varieties of sponges, all different colors and sizes, would add living texture to the scene. And wormlike creatures called lobopodia would clamber by, wriggling across the seafloor on their stubby legs.

Occasionally, some creature buried in the sediment would pop its head up, only to retreat into its protective subterranean lair. And then, just as you least expect it, the ecosystem's odd-looking apex predator would dart by: Anomalocaris, a creature with mouthparts that look like side-by-side shrimp. Jellyfish would hypnotically drift in the waters as comb jellies flit by, the rows of hairlike combs on their sides glittering like rainbows.

Qingjiang's exquisite comb jelly fossils could help scientists further unravel an evolutionary mystery that's been raging for years: Where do these unusual animals, which still exist today, fit on the tree of life?

How much do you really know about jellyfish?

Though comb jellies superficially resemble true jellyfish, the two sets of squishy blobs aren't direct relatives and might be only faintly related. Early work suggested that sponges were the most simple, ancient offshoot of the animal family tree, with comb jellies later forking from the line that yielded jellyfish and, eventually, us.

But for the last decade or so, DNA analyses have suggested that comb jellies are a more removed family member than even sponges. If so, does that mean the comb jelly nervous system evolved independently from the ones seen in jellyfish and humans? To help resolve this debate, it's helpful to have detailed fossils from this early time period, but they'd have to be good enough to preserve a comb jelly's goopy, ghostly form—which is where Lagerstätten sites come in.

In independent work publishing today in Current Biology, other paleontologists make the claim that previously known Cambrian sites, such as the Chengjiang locality and the Burgess shale, contain fossils of the most ancestral comb jellies. If they're right, the ur-comb jelly isn't what anyone expected: a flower-shaped filter-feeder that anchored itself to the seafloor.

“Looking at these fossils and just seeing how they all fit together—the plot was just thickening,” says study coauthor Jakob Vinther, a paleobiologist at the University of Bristol. “That was one of those rare eureka moments that you can only dream of as a scientist.”

The researchers argue that new fossils from Chengjiang, such as the filter-feeder Daihua, show some traits of a comb jelly, including rows of hairlike projections called cilia. And when they compared the new fossils with Dinomischus—an enigmatic creature recovered from the Burgess shale—they came to a startling conclusion: Dinomischus and the new fossils are not only related, but they also represent the close cousins of the comb jellies' common ancestors. If so, comb jellies would fall closer to the jellyfish branch on the tree of life than previously thought.

For now, experts on modern comb jellies are treating Vinther's claims with caution.

“This paper strikes me as seeing the webbed feet and bill of a platypus and saying it must be a duck, [despite the fact that] it doesn't fly like a duck, or quack like a duck,” says Steven Haddock, a biologist at the Monterey Bay Aquarium Research Institute. “To those familiar with modern comb jellies, the purported correspondence with [these] fossils is equally fanciful.”

Vinther welcomes the debate, adding that the newest fossil trove at Qingjiang could help improve the picture: “It’s a Pandora’s box, every time we find a new site like this. There's still many gaps, there's still many weird wonders.”

Fortunately for Vinther and other paleontologists, Fu's team there has only just scratched the surface. “For now, we just have thousands of fossils, but for Chengjiang and the Burgess shale, they have hundreds of thousands,” she says.

To ensure that Qingjiang can enjoy the same longevity of Canada's Burgess shale—which has been studied since the 1900s—researchers are already taking steps to protect the site. Fu says that discussions are underway with the local government to protect Qingjiang in similar fashion as Chengjiang, which is both a Chinese protected area and a UNESCO World Heritage site.