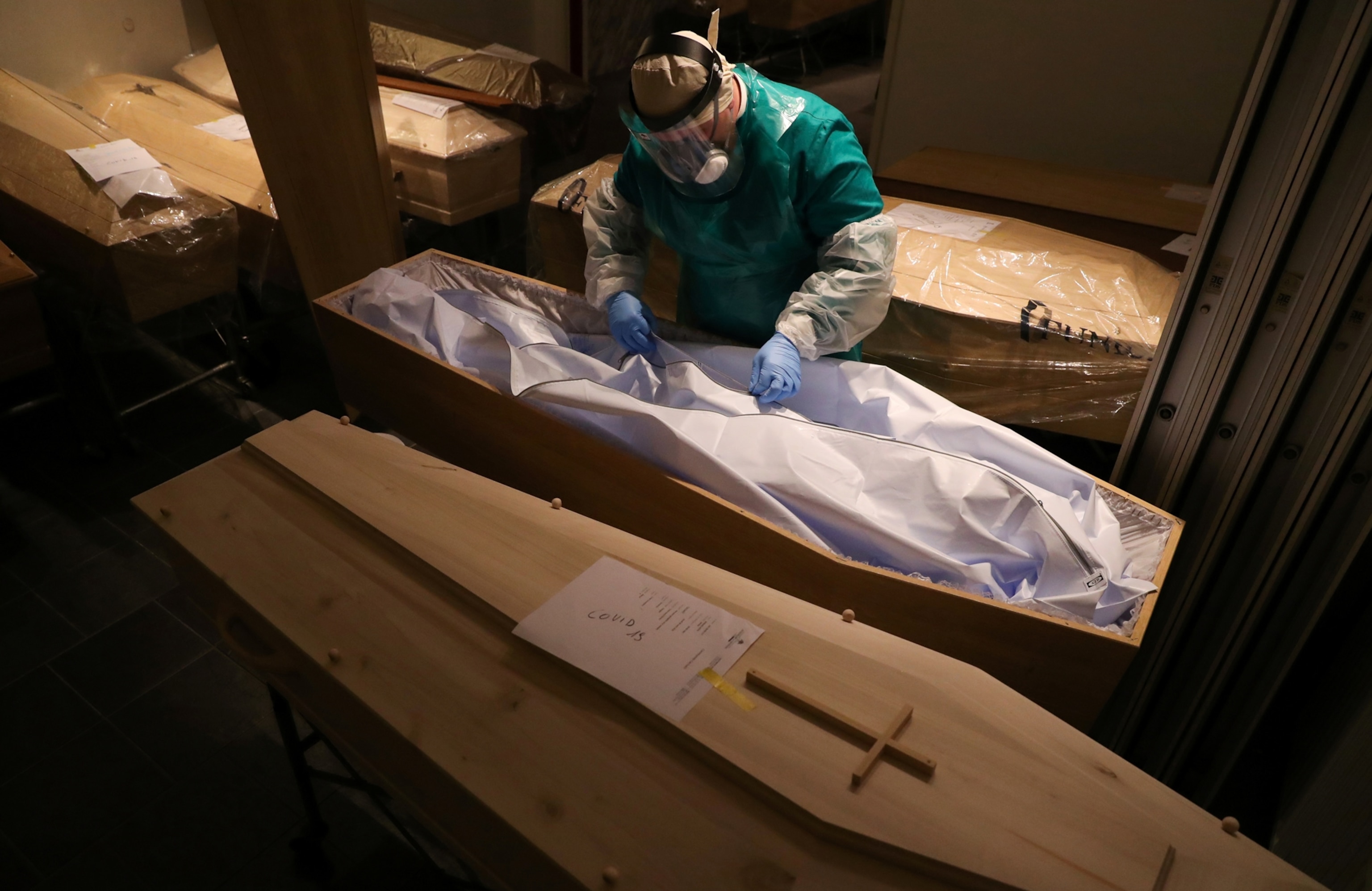 What we'll need to find the true COVID-19 death toll

A mortuary worker in a protective suit looks inside a coffin with the body of a person who died of the coronavirus disease (COVID-19), in Brussels, Belgium April 9, 2020.
Photograph by Yves Herman, Reuters

Every morning, Robert Anderson oversees the grim job of updating the COVID-19 death toll for the United States, the highest in the world to date. The never-ending onslaught could lead to despair, but for Anderson, chief of the Mortality Statistics Branch at the Centers for Disease Control and Prevention, it provides a sense of purpose amid the pandemic’s chaos.

“I feel like I’m doing the dead an important service, to make sure that they are counted, so that their experience can inform programs and policy that may help others,” he says.

Now that the U.S. has crossed 100,000 coronavirus deaths, and with its outbreak far from over, these numbers allow scientists and government officials to track the pandemic’s severity and precisely allocate preventive measures, including tests and physical distancing mandates.

On paper, this morbid task seems as straightforward as counting the bodies. Yet experience with past emergencies shows that gathering a full tally can be challenging even under the best of circumstances. Missed diagnoses, irregularities in data tracking, and indirectly related deaths such as those connected to skipped vaccinations can obfuscate the true scale of the pandemic’s deadly rampage.

Other countries report the same pattern with coronavirus. A provisional analysis of Italian statistics calculated that the actual death rate in the country’s hardest hit areas could be 1.5 times higher than official reports. A British team has tried to predict how the coronavirus will affect mortality rates over the coming year by incorporating age, chronic disease, and government action. In worst-case scenarios, nearly 600,000 additional deaths could strike the U.K. All of this means determining the full impact will be a long-term challenge that will always carry some uncertainty.

“We’re not going to know the true number of deaths until the dust settles, so we need to be aware of the incomplete nature of the data,” says Daniel Weinberger, a Yale University epidemiologist. “But this information is going to drive a lot of important political decisions to be made.”

In the sweltering summer of 1665, as Londoners faced a very different plague—the Black Death—city officials produced a weekly Bill of Mortality that attempted to list every death that had occurred within the city, together with its cause. Historians now know that nearly 70,000 Londoners died from plague that year, and a roughly equal number died from ailments such as “ague and feaver” (probably malaria) and the cryptic “teeth and worms” (don’t even want to know). Data from these bills formed the basis of some of the world’s first statistical analyses of population health.

Although modern methods of tracking deaths have grown more precise and sophisticated, the importance of this data has remained central to public health. “The number of births, the number of deaths—this is the basic, fundamental stuff that forms the foundation of the field,” says Dominique Heinke, a Massachusetts-based epidemiologist.

After an individual dies in the U.S., funeral directors, physicians, and coroners have 48 to 72 hours to report the death and its cause and file a death certificate with the state. The state then forwards the data to the CDC’s Mortality Statistics Branch. Regardless of whether a death is due to a car crash or COVID-19, the process remains largely the same, Anderson says, but there can be a delay of a week or two between the time a person dies and when that death gets recorded at his agency.

Ongoing test shortages in the U.S. mean that not everyone who is hospitalized will necessarily be tested for SARS-CoV-2 infection, which is why the CDC also relies on a doctor’s clinical expertise to confirm the cause of death, Anderson says. The problem, Weinberger found, is that some states count COVID-19 cases that are diagnosed by symptoms alone (known in epidemiology-speak as “probable cases”) while others don’t. Also, the cause listed on a death certificate could be inaccurate, he says.

In the early days of the pandemic, some COVID-19 fatalities were missed, and misidentifying deaths remains a constant problem. One preliminary analysis using CDC data found a surge in pneumonia deaths in March that, while not attributed to COVID-19, may well have been mislabeled due to low testing rates. If tests were more widely available, Weinberger says, this could become less of a concern.

Despite factoring in probable cases, the Yale team that ran the preliminary analysis found that the U.S. was severely underreporting the number of coronavirus deaths. Likewise in Wuhan, the city where the pandemic likely began, officials announced on April 17 they had undercounted the number of deaths due to the coronavirus by 50 percent, increasing the toll to 3,869.

“There’s not a consistent approach to tracking that data, and the numbers aren’t always accurate,” says Samantha Montano, a professor of emergency management at the Massachusetts Maritime Academy and a self-described “disaster-ologist.”

Revisions in death counts, both upward and downward, can be expected early in a pandemic as new information arises, Montano says. A follow-up autopsy may reveal an unrelated disease that was the true cause of death rather than COVID-19, or testing of stored samples may reveal coronavirus infections before individuals were routinely screened.

Intentionally inconsistent tracking can also influence the final tally, notes Megan Price, a statistician at the Human Rights Data Analysis Group. During the Iraq War, for example, officials worked to conceal mortality or to cherry pick existing data to steer the political narrative. While wars are handled differently from pandemics, Price thinks the COVID-19 data could still be at risk of this kind of manipulation.

In addition to these challenges, a disaster itself is often only the tip of the iceberg when it comes to mortality, Price says. As SARS-CoV-2 has upended life around the world, people have become more likely to die due to other problems caused by the crisis.

Someone may die from heart attacks because they avoided the emergency room until it was too late. Someone else may experience an opiate overdose that turns fatal due to social isolation. Understanding the full scope of the pandemic means accounting for these indirect fatalities and comparing their numbers to previous years to determine whether the overall death rates changed and by how much.

In their analysis, Weinberger and his colleagues found that deaths from all causes increased 1.5-3 times in New York and New Jersey in the early days of the pandemic, even those seemingly unrelated to a respiratory virus, such as heart attack and stroke.

An earthquake isn’t a disaster. It’s when the system can’t cope that it becomes a disaster.
ByIlan KelmanUniversity College London

This “excess mortality,” defined as the increase in the death rate over the everyday baseline, is even more challenging to calculate than COVID-19’s direct casualties, according to disasters and health researcher Ilan Kelman at University College London. Yet excess mortality offers a clearer sense of the epidemic’s severity and how well governments managed the fallout.

“An earthquake isn’t a disaster. It’s when the system can’t cope that it becomes a disaster,” Kelman says. What’s more, the aftereffects often persist for long after the initial crisis has passed. When a team of scientists from the University of Puerto Rico and George Washington University analyzed the excess mortality that followed Hurricane Maria, which ravaged Puerto Rico in 2017, they discovered that the rise in the death toll persisted for at least a year.

Pinpointing whether any individual excess death is truly related to COVID-19 is borderline impossible. Would someone have survived a heart attack if they sought medical care? It’s up to the physician signing that death certificate to make that judgement, Anderson says, and it’s a process that’s subject to errors and bias.

Rather than parse single deaths one by one, Stéphane Helleringer, a demographer at Johns Hopkins University, and other researchers are using statistical tools to estimate how overall death tallies have increased during the pandemic. Calculating this change depends on a detailed understanding of the country’s mortality patterns during non-pandemic years. Some of the models epidemiologists use to make these calculations hail from work with seasonal diseases such as bacterial pneumonia and influenza.

During a bad flu season, for example, statisticians tend to see a rise in deaths from cardiovascular disease. Extrapolating from there, epidemiologists can make educated guesses about what might happen with cardiac deaths during the coronavirus pandemic.

The problem, according to epidemiologist Joseph Wu, is that the world’s response to the pandemic could render many of these assumptions useless. The stress of the pandemic and resulting economic turmoil could increase cardiovascular deaths independent of the respiratory illness, he says, which will likely skew the relationship between coronavirus and heart attacks.

“The challenge is to make the best use of available information and make the best mathematical model we can,” says Wu, who works at the University of Hong Kong.

And however precise these statistical methods can be, they are only estimates that are subject to any number of errors and biases in how the data are reported and interpreted. For at least the next two years, Price says, the answer to the full coronavirus death toll is going to be, ‘I don’t know yet,’ until all the autopsies are done, the paperwork is filed, and researchers conduct quality checks on the data.

“There’s a reason we call this the novel coronavirus,” she says, referring to the newness of this disease. Moving closer to the truth will take time, Price adds, but “I have faith in science.”

This story has been updated with the news that the U.S. death toll broke 100,000 and with a new affiliation for Samantha Montano, who recently completed her doctorate. The story was originally published on May 22.