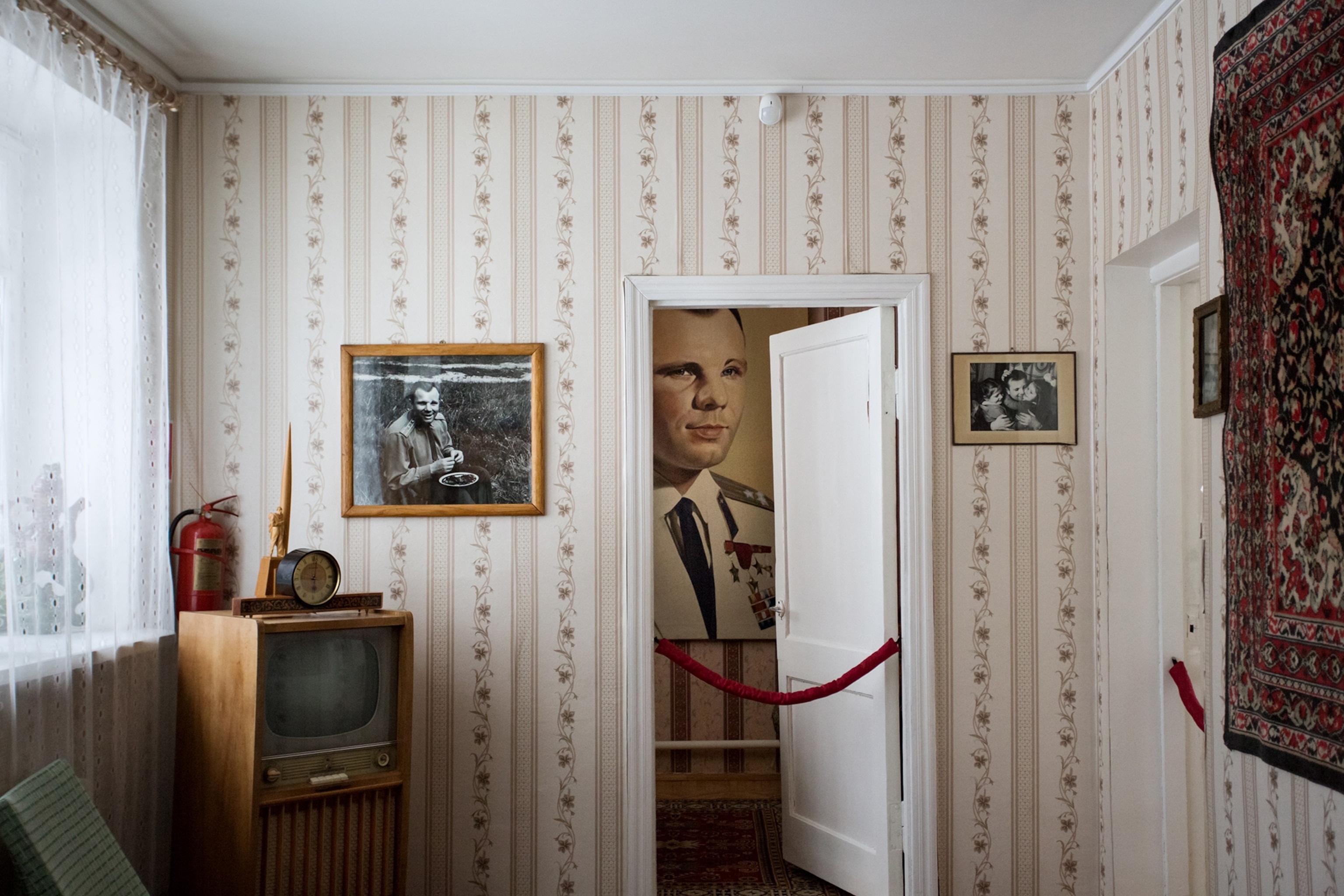 Step inside the hometown of the first human in space

West of Moscow, the small provincial town of Gagarin is a shrine to beloved Soviet cosmonaut Yuri Gagarin.

A portrait of Yuri Gagarin, the first human in space, hangs in his parents' former home, which became a museum after his death in 1968.
Photograph by Daria Garnik

Tonight, space fans around the world will party like it’s 1961.

Since 2001, the evening of April 12 has been celebrated every year as Yuri’s Night—a global event to honor one of space exploration’s most beloved figures, Soviet cosmonaut Yuri Gagarin, who was the first human to blast into space. Fans will dance, hoist drinks, attend lectures, and generally gather to pay tribute to a hero and revel in all things cosmic.

Though he never set foot outside his Vostok 1 spacecraft as it made a complete orbit around Earth, Gagarin’s journey was a major milestone in the space exploration timeline. He was the first person to see space from beyond the confines of the atmosphere, and the first person to witness the dazzling view of our planet from so far away.

Among Gagarin’s many admirers is Russian photographer Daria Garnik. Now in her 30s, Garnik became obsessed with space and science fiction as a teenager, when she was introduced to the American television series, The X-Files.

“Yuri Gagarin was a hero of mine when I was a kid,” she says, even though she was born years after Gagarin’s tragic death in a plane crash in 1968. “He was handsome, kind, down-to-earth and everyone could relate to him.”

As an adult, Garnik wanted to learn more about the cosmonaut, so she began documenting the small provincial town west of Moscow where Gagarin grew up. Once called Gzhatsk, the town was officially renamed Gagarin to honor him when he died, and it has since become a shrine of sorts, with several historic homes, memorials, and museums that commemorate his achievements. (Learn why we need to change the way we talk about space exploration.)

“I came to Gagarin to shoot a story about memory, time, nostalgia for the first cosmonaut, and the cult that formed around him,” says Garnik, who grew up in the city of Ekaterinburg in Russia’s Ural Mountains. “I think I wanted to get to know Gagarin as a person who had a difficult life, and not just the media image from Soviet posters.”

Now based in Minsk, Belarus, Garnik has traveled to the town of Gagarin twice so far for her photo project. Full of Soviet-era artifacts and posters celebrating the cosmonaut, the town has a timeless feel to it, she says.

“Gagarin hypnotized me with its atmosphere of being lost in time and preserved; I liked its slow pace of life,” she says.

Through this project, Garnik got to know many of Gagarin’s residents, some of whom remember him from when he was alive. After his pioneering spaceflight, Gagarin came back to his home town to visit his family; some of his relatives even still live there.

For Garnik, April 12 is an important day: “I think Yuri would want that on this day, we also remembered Korolyov, Yazdovsky, Titov, and other wonderful scientists and enthusiasts who made his flight possible,” she says, referring to Soviet rocket engineer Sergei Korolyov, space medicine researcher Vladimir Yazdovsky, and cosmonaut Gherman Titov, who was the second person in space. (Read about the modern-day cosmonaut who has spent more time in orbit than any person, ever.)

“He would want to popularize astronomy, space, and aviation so we could celebrate new scientific breakthroughs of mankind. He’d want us to look up more often, to dream, and to see further every time.”

Please be respectful of copyright. Unauthorized use is prohibited.
Daria Garnik was born in 1986 in Ekaterinburg, Russia. A student at Docdocdoc, a school of contemporary photography in Saint Petersburg, Garnik is interested in the phenomenon of human memory and changes in the surrounding landscape. She is currently based in Minsk, Belarus.