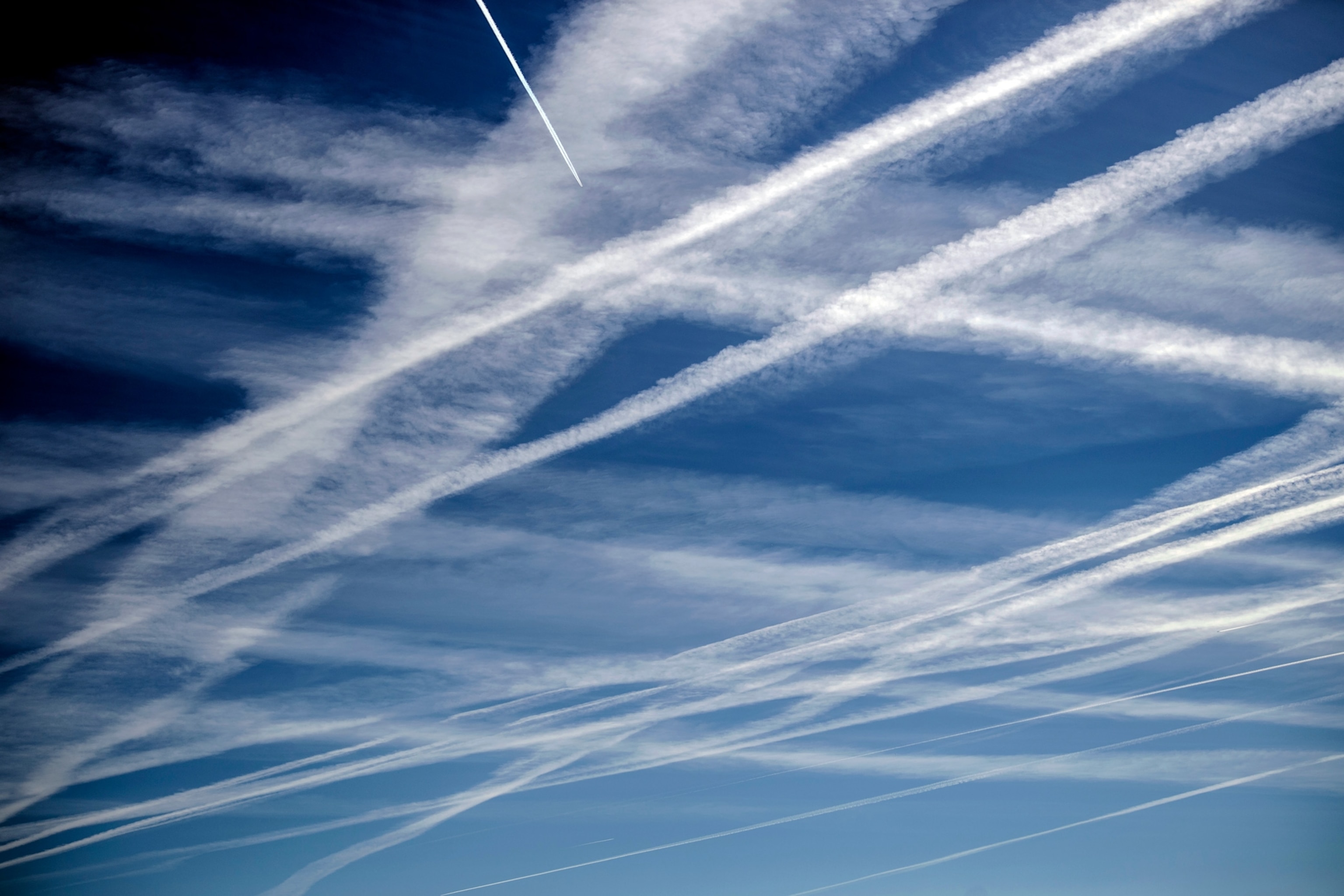 Greener air travel will depend on these emerging technologies

Electric engines, alternative fuels, and better navigation could reduce emissions—and mitigate the impacts of a global return to the skies.

The sky over Cologne, Germany, is crisscrossed by condensation trails from airplanes. Because the pollutants in these so-called “contrails” contribute to climate change, researchers are studying ways to eliminate them—one of several ongoing efforts to make flying more sustainable.
Photograph by Federico Gambarini, AP

Here’s a word you may have overlooked in 2020: flygskam, a Swedish term for the feeling of being ashamed to fly. In a year that saw a 66 percent decrease in flights, compared to 2019, you might think that flygskam has flown the coop.

But with a recent uptick in air traffic—and the anticipation of travel’s rebound thanks to COVID-19 vaccines—flygskam is taking flight again. The term originated in 2017 as part of a campaign to change how we fly, from the frequency of our flights to the technology of our aircraft. The goal: to mitigate the carbon dioxide emissions that experts think may triple by 2050.

Aviation accounts for a relatively small portion of global emissions—2.5 percent. While bigger culprits, such as electricity and agriculture, account for greater emissions, they also benefit billions of people. Airline emissions, in contrast, come mostly from rich travelers in the richest countries: business class passengers produce six times as much carbon as those in economy class, and one percent of the most frequent fliers are responsible for half of all aviation’s carbon emissions.

Will the pandemic-caused travel slowdown be enough to shake up aviation and produce lasting benefits for the environment? In 2020, the drop in air traffic likely reduced carbon emissions by several hundred million tons. Some are calling to make those reductions permanent by eliminating contrails, using new fuels, improving navigation, and more. With climate change reaching a point of no return as early as 2035, action will need to happen quickly.

(Wondering what you can do? Here are 12 ways to travel sustainably in the new year.)

Of course, flying less would have an even bigger impact, and there are calls for travelers to fly only once a year, give up flying for a year, and attend conferences virtually. Still, air travel is here to stay, so the cleaner the better. Here are some of the ways flying could clean up its act in the years to come.

Aviation emits more than carbon dioxide; it also produces water vapor, aerosols, and nitrogen oxides. These pollutants absorb more incoming energy than what is radiated back to space, causing Earth’s atmosphere to warm. This means aviation’s impact on warming might be an even bigger share than its carbon footprint.

The worst of the non-carbon impacts are from contrails, short for condensation trails: the line-shaped clouds that form from a plane’s engine exhaust. A small number of flights are responsible for most contrails. This is because contrails form only in narrow atmospheric bands where the weather is cold and humid enough.

Avoiding those zones could make a big difference in limiting aviation’s non-carbon pollution. One research paper modeling Japan’s airspace found that modifying a small number of flight routes to skip these areas could reduce contrails’ effects on the climate by 59 percent. The change would be as little as 2,000 feet above or below these regions. While flying a plane higher or lower can reduce its efficiency and require more jet fuel, the paper found that limiting contrails would still offset any additional carbon emissions.

“There is a growing realization that the impact of contrails is a really significant component of aviation’s climate impact,” says Marc Stettler, one of the paper’s authors and a lecturer on transport and the environment at Imperial College London.

The spots where contrails can form change from day to day, so airlines need accurate, multi-day weather forecasts to avoid them. In the future, pilots could report contrails, much like they now do with turbulence, so other planes could adjust their flight paths.

The EU’s aviation authority, EUROCONTROL, starting preparing last year to conduct trials on a contrail avoidance project. Stettler and his colleagues plan to continue research on how to go about implementing changes that could reduce contrails.

“This is the faster way that aviation can reduce its climate impact,” he says.

These unmanipulated images from Kost’s window seat help change perspectives and encourage travelers to leave the shades open. In this photo, microorganisms brighten up the San Francisco Bay salt ponds with vibrant colors.

Commercial airplanes rely on kerosene-based propellant, but companies are experimenting with turning biomasses, such as vegetable oil and even used diapers, into jet fuels. Some research suggests these biofuels could cut carbon pollution from airplanes by upwards of 60 percent. But all biofuels are not created equal.

Those that could be processed into food are unsustainable because of the planet’s growing population, which needs crops for calories. Used cooking oil and pulp leftover from agriculture or logging are expensive and not produced at a scale large enough to make a meaningful difference. But this doesn’t mean that other sustainable aviation fuels won’t be developed.

(How clean is the air on planes? Cleaner than you may think.)

“You hear that aviation is a hard sector to decarbonize,” says Andrew Murphy, the aviation director at Transport and Environment, a European nongovernmental organization. “That is only half the story. The other half is we haven’t tried.”

More-promising areas include e-fuels, or “synthetic fuels,” which don’t require engines to be reengineered. To make e-fuels, electricity—hopefully renewable—is used to split water into hydrogen and oxygen. The hydrogen is then combined with carbon dioxide to make jet fuel. KLM recently conducted its first flight powered by synthetic fuel.

Another effort entails pulling carbon out of the atmosphere and using it as an ingredient in fuel. Although this technology is still in early stages, that doesn’t mean it has to be far off.

“The pandemic has shown us new technology can be sped up if we want it to,” Murphy says.

Cars aren’t the only conveyance undergoing electric innovation: one count found a hundred electric-powered aircraft projects in the works.

The first electric flights will be in small planes with a range limited to a few hundred miles. Norway, a country with numerous islands and mountainous terrain calling for puddle jumpers, has promised that all of its short-haul flights will be on electric aircraft by 2040. Underserved areas could one day get new routes flown exclusively by electric planes.

Going farther or flying bigger planes with electrification isn’t on the near-term horizon. But some companies are exploring a hybrid of electricity and hydrogen, which could extend ranges. Boeing and others are also looking at hydrogen as a means of propulsion even without electrification. Airbus recently revealed three different hydrogen planes with plans to have one or something like it in service by 2035.

The Hindenburg disaster in 1937 ended the first hydrogen era. The aviation industry tried and dropped a hydrogen effort again in 2010 after finding it too expensive. But Llewellyn points out that hydrogen has been improved by other industries, such as automobile and space, proving its safety, innovating on its uses, and bringing down its costs.

“The ecosystem is evolving in a much different way than 10 years ago,” Llewellyn says. “We have a better starting point.”

Air France, Norwegian, and Malaysia Airlines are already using technology called Sky Breathe that relies on big data and AI to analyze billions of records from flights in an effort to find ways to save fuel. The company behind Sky Breathe says it has saved its customers more than $150 million in 2019 and reduced CO2 emissions by 590,000 tons.

The U.S. Federal Aviation Administration (FAA) is midway through a multiyear upgrade called NextGen, which will be a series of interconnected systems to improve how air traffic control sees, navigates, and communicates. The FAA says the technology will make it possible to schedule tighter landings and takeoffs and decrease delays that leave planes sitting on the tarmac or circling the airport.

“AI is really good at looking at patterns,” says Ashish Kapoor, an AI researcher at Microsoft who works on aviation projects. “We have years of experience of flying planes, so we have a lot of data out there.”

There will be more data as planes get kitted out in sensors, which will produce additional insights into improvements. All that data means that the next stage of aviation could look different. Algorithms could develop new plane designs and come up with flight plans, taking into account speed, comfort, and emissions.

“We don’t have to evolve like aviation has done the last hundred years,” Kapoor says.

But for this to happen, more than technology has to evolve; countries will need to change legislation, and airlines will need to fund expensive research. It will take incentives to encourage the aviation industry to become sustainable. Janice Lao-Noche, an environmental scientist and development economist, says it’s going to take a lot of flygskam and maybe the pain of climate change disrupting more flights for all the innovations to take off.

“I don’t think it’s futile,” Lao-Noche says. “[But] this is going to be, no pun intended, a bumpy ride for the aviation industry.”

Jackie Snow is a technology and travel writer based in Washington, D.C. Follow her on Instagram.
Editor’s note: This article has been updated to include a reference to the first KLM flight powered by synthetic fuel.