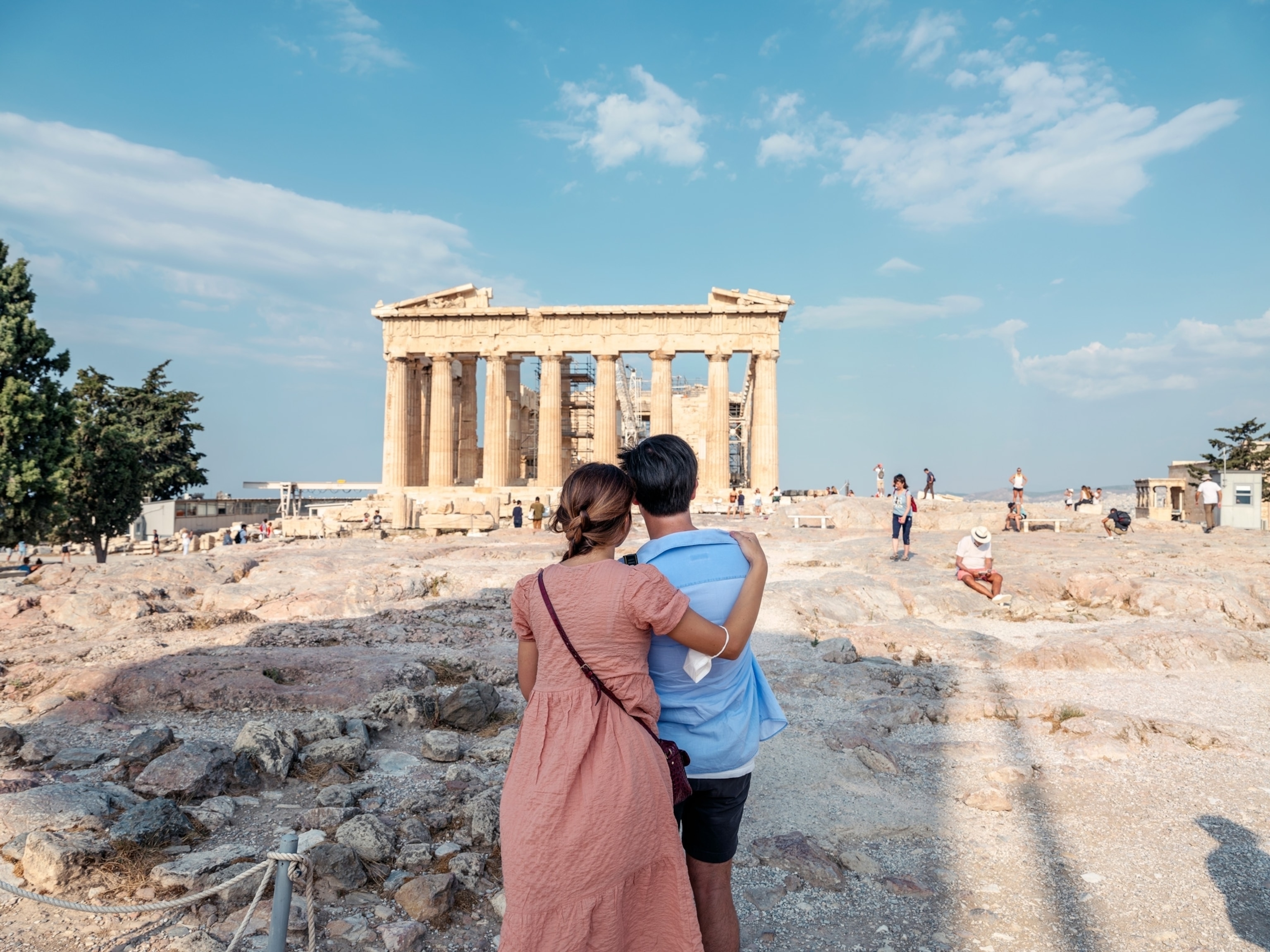 How Greece is rethinking its once bustling tourism industry

With arrivals down 70 percent, the nation plots its post-pandemic future with a focus on sustainable tourism.

A couple visits the Acropolis in Athens, Greece. The columned Parthenon is usually surrounded by tourist crowds, but this year, due to the novel coronavirus, tourism to the country has dropped precipitously since March.

Around the middle of June, a week before some international flights to Greece resumed, Michael Ermogenis and a handful of other Santorini locals gathered for their daily coffee at a bakery in the postcard-perfect village of Oia.

The stone streets of the village were quiet and empty this early morning, as they had been for the past several months since Greece’s strict quarantine measures had taken effect. But unlike other mornings, conversation at the bakery centered around news that a tourist couple and their daughter had shown up on the island. They had sailed from France to Greece and were staying in Oia.

(Related: A surge in coronavirus cases jolts France after a quiet summer.)

So strange was the phenomenon that nobody could talk about much else for a couple of days—this on an island which typically welcomes 2.8 million visitors a year. “That’s the sort of effect that the isolation had on the locals, that everyone started talking about these three people who had arrived,” says Ermogenis. To his knowledge, they were the first foreign visitors to step foot on Santorini since Greece emerged from its lockdown on May 4—the first of what the islanders hoped would be many more.

Angelika Lymperi and Alexandra Mpeleri, two nurses who work for the Hellenic National Public Health Organization, prepare a COVID-19 test for a traveler at the Athens International Airport.

Tour guides with signs and face masks wait at the port in Santorini's capital, Fira. The popular island of Santorini has seen a drastic decrease in tourism.

Yet, by mid-July, even after international arrivals were once again allowed into all Greek airports and sea ports—minus several high-risk countries like the United States and Brazil—things did not appear to be reverting to normal. Although many foreign visitors were returning to Santorini, fear of the virus as well as economic hardship kept most people away.

From compliance to concern

Greece has been lauded for its swift and effective response to the novel coronavirus threat. Immediately following the confirmation of the first three cases of COVID-19 on February 27, and before a single death was recorded, Greek authorities started putting in place restrictions on large gatherings, including in educational and religious institutions.

By March 23, restrictions on all nonessential movement throughout the country were enacted, officially commencing a full lockdown in Greece. Over the following six weeks, people wanting to leave their residence were required to send a text message to a government-issued phone number with a code—a number from one to six—stating the reason for their movement. Among the acceptable reasons were: travel to or from one’s workplace (during work hours), going to the pharmacy or supermarket, visiting a doctor, and personal exercise.

For the most part, everyone followed these measures without complaint. But with the approach of the summer tourist season, compliance quickly turned to worry. More than a quarter of Greece’s GDP comes from tourism and the thought of losing out on the much awaited and much needed income from the millions of tourists who would arrive in Greece this year was terrifying for some.

(Related: How clean is the air on planes?)

“It’s a choice between death by hunger or death by coronavirus,” says George Koukoulas, an Athenian who owns Mezedaki by Lordos, a taverna in Kaisariani, an Athens neighborhood known for its restaurants. Although Koukoulas’s taverna did better this summer than he had anticipated, business was noticeably down compared to other years. “This is an area with many Airbnbs, so without tourists we don’t have the same amount of people,” he says.

Tourism numbers have steadily climbed in Greece over the past decade, reaching a record high of 33 million in 2018. But recent years have seen a dip in numbers in certain locations, such as the island of Lesbos, where the ongoing refugee crisis has scared away most of its annual visitors. Moria, Lesbos’s infamous refugee and migrant camp, burned to the ground on September 9, leaving 13,000 people homeless.

People soak in the sun at Mesakti Beach on the island of Ikaria, Greece.

“By no means do I want at any point to minimize the dire conditions—the unlivable conditions—the people in Moria were living in,” says Vati, who herself volunteered her time and resources throughout the worst of the crisis. But, she says, “people were and still are afraid to come.” This fear, compounded by the coronavirus this year, has meant that many businesses on the island have not survived the steep downturn in tourist arrivals.

Silver linings for some

Greece is expecting a 70 percent decrease in visitor numbers by the end of this tourist season. Islands such as Santorini, Mykonos, and Rhodes, which depend on mass tourism and a more international crowd, will be the hardest hit. Whereas islands such as Ikaria, lesser known to foreign tourists, may actually end up faring much better.

Ivanka Gancheva, from Bulgaria, wears mandatory PPE while cleaning rooms at Canaves Oia, where she has worked as a housekeeper for the last 14 years. Despite new government regulations requiring hotels to skip housekeeping service, the luxury hotel allows guests to choose the type of cleaning they would prefer in order to feel safe.

Desislava Karaganska, also from Bulgaria, wears a mask at the reception desk at Canaves Oia—a five-star hotel where she has worked since 2010. She says that the main difference from other years is that many of the bookings are now received last minute. And that there are no American guests.

(Related: Eat like a god on this sun-soaked Greek island.)

“We don’t depend on mass tourism and we don’t depend on tourists from abroad,” says Isidoros Plytas, co-founder and owner of Ikaria Surf School. This year, with more Greeks traveling within their own country, there were even more Greek visitors than usual on the island. “Because we depend on Greeks, [the tourism decline] didn’t affect us so much.”

In particular, Ikaria businesses involving outdoor sports and activities were less impacted by the downturn, because, as Plytas explains, “lots of Greeks turned towards nature and sports [during the lockdown].” In previous years, most Greeks went to Ikaria for the summer festivals; this year they wanted to explore alternative activities, says Plytas, whose surfing school has been having a great season. “They were asking me about hiking, they were asking me about wine-tasting and cooking lessons.”

The pandemic and subsequent slow tourist season have been an opportunity for Greece to rethink and reinvent the way it does tourism: how can it be more sustainable and less driven by mass consumerism? According to Ermogenis, who is behind the Save Oia campaign that promotes a more responsible travel experience on Santorini, there are several aspects to think about during this brief respite from the usual crowds.

Achilleas Aggelidakis, a graphic designer, works at the café Lygeris, in the town of Akamatra, on Ikaria.

Maria Mantzourani, an employee at B.loose clothing store in Oia, Santorini, says she works less now because of the pandemic. “I feel that my workload is more reasonable," she says.

The number of tourists who landed on Santorini on any given day had become so high that many feared the infrastructure and ecosystem of the island would not be able to handle it for much longer. “These are the things that are going to need to change if Greece is going to continue to rely on tourism as one of its top two or three sources of income,” says Ermogenis.

“Even in a year with so much more financial uncertainty and stress, we’ve increased the number of businesses that are a part of Clean Blue Paros,” says project manager Zana Kontomanoli.

Kontomanoli says she thinks that the pandemic has been largely responsible for this unforeseen opening for more individuals and businesses to become involved in the initiative. The people who were too busy to engage with the initiative during last year’s tourist season, this year had “more time on their hands to take the appointment and could hear about the changes they could bring about in their businesses,” she says.

“It’s [been] an amazing opportunity in disguise,” she says. “It’s just given us time to relax and see how things could possibly be.”

Fahrinisa Campana is a freelance multimedia journalist based in Athens and New York, reporting on gender, migration, and human rights issues. Follow her on Twitter.
Loulou d'Aki is a Swedish photographer and visual artist based in Greece and Sweden. Follow her on Instagram.
This work was supported by the National Geographic Society’s COVID-19 Emergency Fund for Journalists.