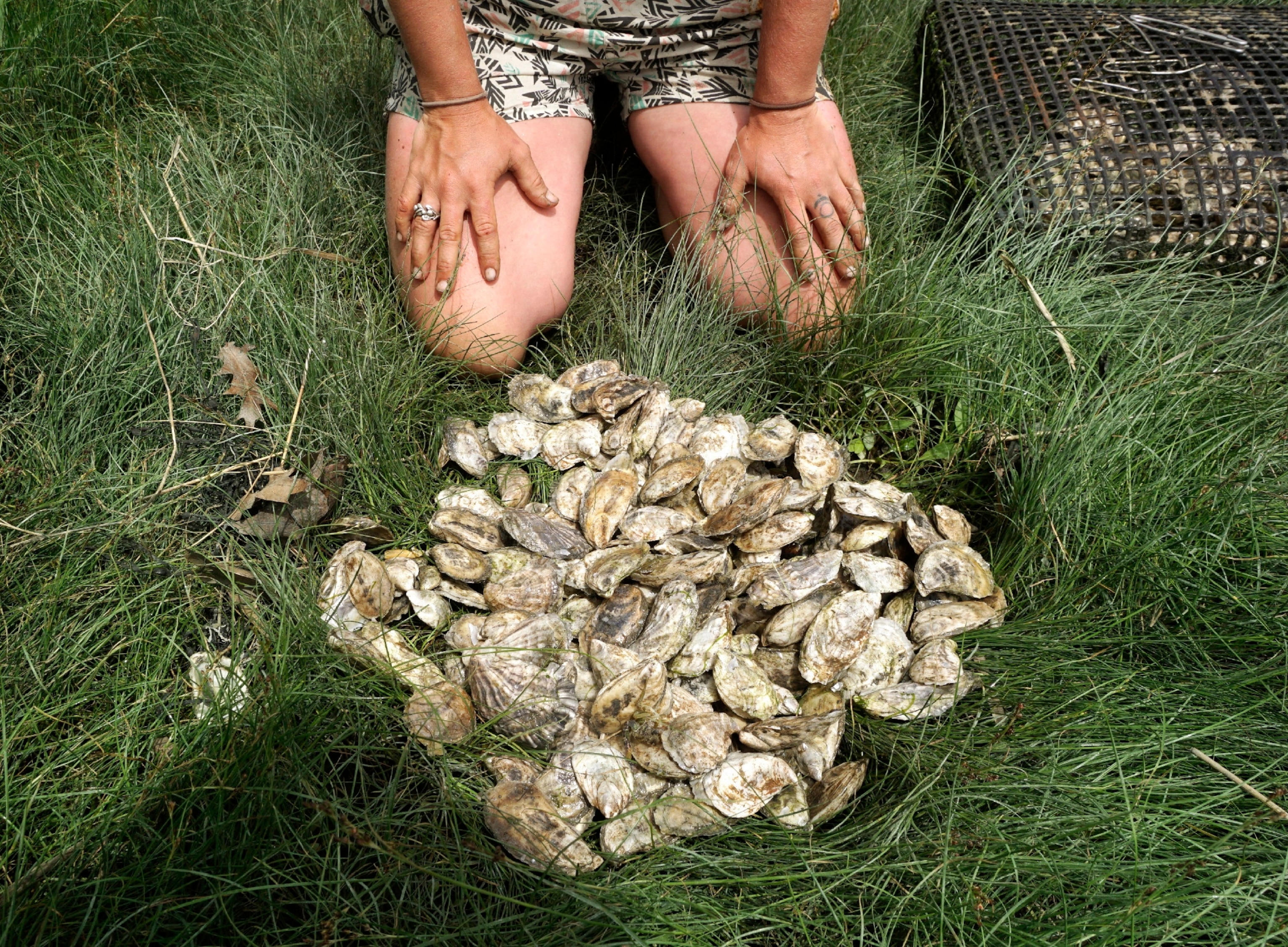 Your love for fresh oysters can help the planet

Oysters ready for counting lie along the banks of Maine’s Damariscotta River. The river supplies about 75 percent of the state’s oysters and is a stop along the Maine Oyster Trail.
Photograph by Gregory Rec, Portland Portland Press Herald/Getty Images

We drop anchor and I learn the trick to the perfect shuck—gently work the knife into the back hinge—and slurp the freshest oyster I’ve ever tasted. The mollusk was harvested minutes earlier from the lineup of floating cages beside our boat in this secluded section of Maine’s Casco Bay.

“There’s a freshwater spring off Upper Goose Island that drains out right into the farm and cuts the salinity, so our oyster is much more bright and balanced, with a light cucumber finish,” says Cameron Barner, an oyster farm owner with an advanced degree in aquaculture, and my tour guide for the afternoon. “If you go upriver or eat bottom-planted oysters, you get a more minerally umami flavor.”

Oyster farm tours, like this one led by Love Point Oysters, and self-guided bi-valve trails are cropping up throughout the United States. COVID-19 stalled the trend but with travel restrictions loosening, oyster enthusiasts are once again back on track. Along the Maine Oyster Trail, which re-launched in June, tasting tourists can earn swag by “checking in” at various experiences and sites along the trail, including Love Point. Other trails can be found in Louisiana, Virginia, North Carolina, and Washington, the country’s largest producer of aquaculture.

But this isn’t just about slurping and shucking. You’re also getting schooled. On tours and along the trails, visitors learn about how sustainably farmed oysters help restore devastated wild oyster populations. Farmed oysters don’t harm or rely whatsoever on their wild cousins. In fact, they help seed wild populations, clean waterways, and feed many species of fish.

“It used to just be your old uncle or grandfather who liked oysters,” says the 27-year-old Barner. Now, young people are diving into diverse and subtle oyster flavor profiles—and angling to be a part of the environmental solution, too.

“There’s a real interest in career opportunities where people can make a living on the water or outdoors in a way that does something good for the environment,” says Robert Jones, global aquaculture lead at the Nature Conservancy.

People have been snacking on oysters for over 165,000 years. Native American practices promoted the health of oyster reefs for thousands of years before the arrival of European colonizers, according to a study by Science Advances. In ancient Greece and Rome, the wealthy considered oysters a delicacy. Beginning in the 19th century in the U.S. and Europe, they were a popular and cheap source of protein for the working class.

But as a result of overfishing and disease from pollution and climate change, wild oyster reefs have become one of the world's most endangered habitats. Around 2012, wild populations experienced a near total collapse in places like the Chesapeake Bay, Apalachicola Bay, and Washington State.

By creating a demand for caged, “farmed” oysters grown sustainably from seed for restaurant menus, and deepening our oyster knowledge, we’re helping restore the wild reefs.

Farmed oysters are an answer

The ecological benefits of oyster agriculture are numerous, starting with a growing process that uses almost no greenhouse gas emissions, water, feed, fertilizer, or food. Larvae from certain farmed oysters, called diploids, escape from cages to seed the wild oyster population on their own.

What tourists learn along oyster trails is that each salt-water bivalve is a tiny ocean vacuum, and without enough wild oyster reefs, our waterways have become murkier. Oysters can filter 50 gallons of water a day from pollutants such as nitrogen, a result of agricultural runoff and climate change. They either expel these pollutants or absorb them in their shells or tissues (which is why you shouldn’t eat wild oysters from just any waterway).

Both wild oysters and farmed oysters—which are grown in strictly regulated clean water—consume algae and filter other particulates, allowing more sunlight to reach the ocean floor, promoting the growth of eelgrass, a habitat for many species.

(Here’s how to feed the world without destroying the planet.)

Like coral, fused-together wild oysters that form reefs prevent erosion, protect the land from storms and tides, and act like little marine sanctuaries for other fish. Hundreds of fish species also grow, eat, and mate in farmed oyster cages, according to a study recently published in Reviews in Aquaculture, the first ever to quantify this on a global scale.

“Since farming actually has a positive benefit on biodiversity, we should be encouraging more of it and allowing folks to start oyster farms in places where there is a need for more habitat,” says the Nature Conservancy’s Jones, lead author of the paper.

Oct. 9, 2014 - The state of Maryland is running an innovative oyster gardening program to help improve the water quality of the Chesapeake Bay and bring back the bay's natural filters. Using baby oysters (called spat) provided by the University of Maryland and cages built by inmates at a Maryland prison, volunteers tend to the oysters for a year. The full-grown oysters are then harvested and delivered to sanctuary reefs in the Chesapeake, where they will start the filtering process and provide habitat for other bay species.

This hand-in-glove relationship between oyster farmers and wild oyster conservationists is taking place in hard-hit waterways like the Chesapeake Bay, home to one of the world’s leading restorations, and New York Harbor, with the Billion Oyster Project.

“Water quality is so important to the tourism industry: It feeds the seafood industry. So the more oysters we have in the water, the healthier the water’s going to be,” says Tanner Council, of the Chesapeake Oyster Alliance, a coalition funded by the Chesapeake Bay Foundation and dedicated to adding 10 billion new oysters to the bay by 2025.

Meanwhile, last fall the Nature Conservancy pledged to buy 5 million surplus oysters from more than a hundred sea farms hit hard by the closing of restaurants and raw bars during the pandemic, and to return them to the wild to restore oyster reefs.

As the guys from Love Point Oyster like to say, the consumer drives how we treat our planet. Each time a traveler along the Maine Oyster Trail hops a boat or kayaks out to visit a farm, buys oysters direct from a farmer, or downs a half-dozen at a raw bar or shuck truck, it benefits not just an industry but also the environment.

Back at Love Point, I finish off almost a dozen eastern oysters—known as Crassostrea virginica, one of only five species farmed in North America. Ben Hamilton, co-owner of Love Point, suggests throwing the half shells back in the bay to neutralize harmful acid in the water from carbon dioxide.

“The calcium eventually works its way into the water column and helps buffer the acidity of the water, counteracting the effects of CO2,” he tells me. Many restaurants are similarly recycling their oyster shells back into waterways to restore reefs.

As climate change continues to disrupt fish populations, and overseas competition remains stiff, some fishers, like one young lobsterman I met now working for Love Point, are finding more reliable income as oyster farmers. As for Hamilton, he has no regrets about walking away from a 120-hour-a-week Wall Street job. “It can be a very pessimistic world, but love is the point, right?” he says, adding that his career change inspired his company’s name.

“Oysters ask so little of their natural surroundings and they give back so much in return, just by munching on the ambient phytoplankton in the water and by being a source of protein that brings a great deal of happiness to people,” Hamilton says. “That’s a story that deserves to be celebrated.”

HOW YOU CAN HELP

Learn about sustainably farmed oysters, while slurping and shucking, on guided tours and along self-guided trails. Volunteers can also join groups such as Orange County Coastkeeper, in California, to help restore oyster reefs. Eat at restaurants that recycle their oyster shells. Buy oysters directly from farmers and throw your own shells back in the waterway.

Anna Fiorentino is a Maine-based science writer, who also covers the outdoors, travel, and culture for Outside and Maine Magazine. Follow her on Instagram.