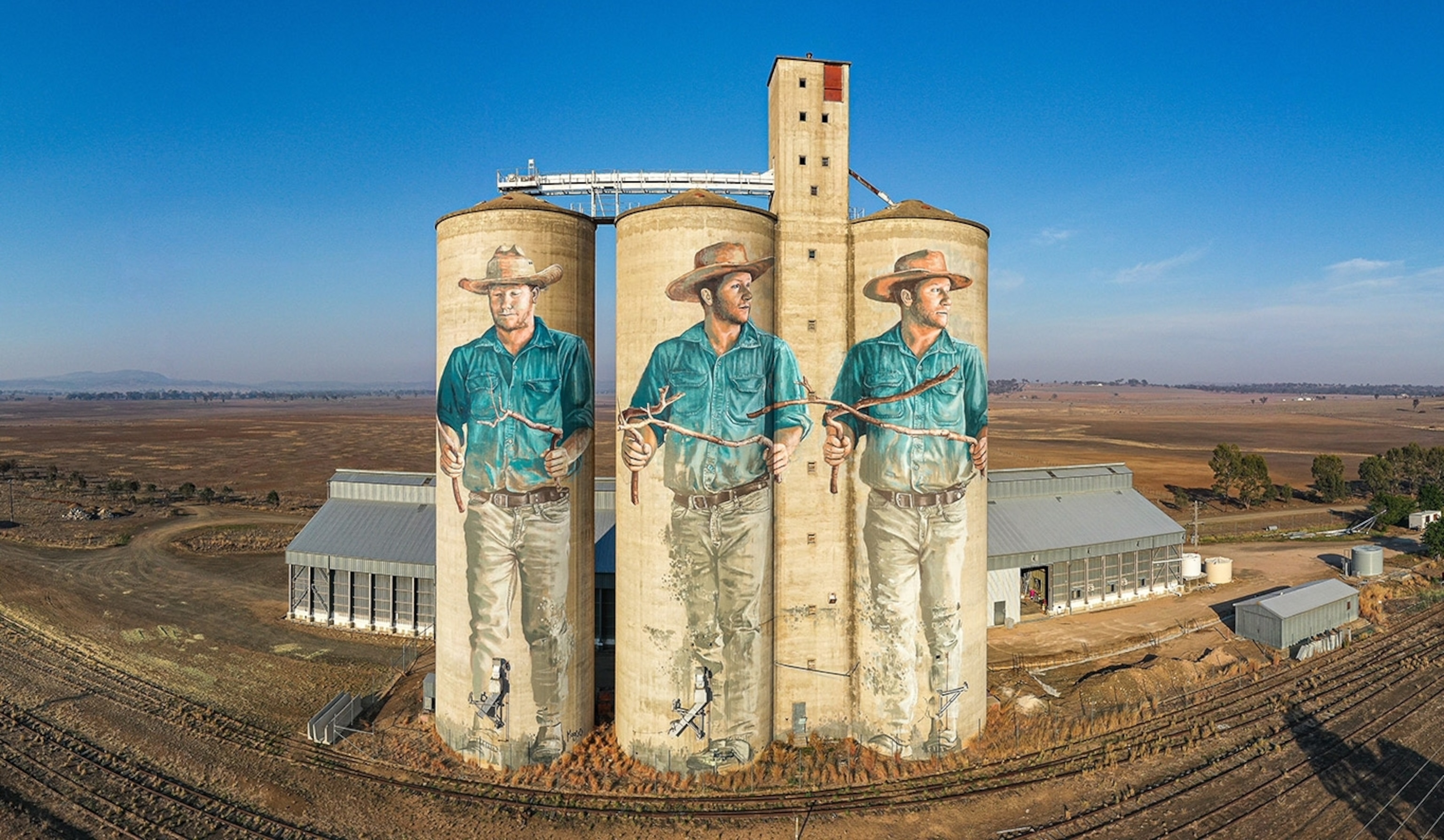 Across the country, painted silos are turning fading rural areas into open-air art galleries. Locals hope they bring tourism, too.

Sydney artist Fintan Magee painted this water diviner searching for an elusive spring on a grain silo in Barraba, a rural town in the Australian state of New South Wales. It’s one of many street art-style projects that have recently gone up in agricultural areas across the country.

Life isn’t easy in rural Australia, where your nearest neighbor might be hundreds of miles away, and it could be years between each rainfall. But farmers in southeastern Australia have had it particularly rough over the past couple of years, with crippling droughts forcing many to sell off their livestock to survive or even walk away from their agricultural businesses for good.

In southwest Queensland, the cotton- and sheep-farming community of Thallon (population 257) is one of many Australian outback towns now at risk of being wiped off the map by climate and population changes. Passenger railway services to and from the town—located roughly 355 miles southwest of Brisbane—stopped in the 1990s, hastening its decline.

“By 2015 Thallon was on its knees, so we got the community together to see what we could do to reinvigorate the town,” says Leanne Brosnan, secretary of the Thallon Progress Association. Ideas the group helped to implement included a statue of a six-foot-tall hairy-nosed wombat in a park and, in 2017, a massive mural covering four 98-foot-tall grain silos opposite the town campground.

Dubbed “The Watering Hole,” the outsize mural by Brisbane street artists Joel Fergie and Travis Vinson depicts a fiery sunset over a landscape dotted with sheep, rainbow-hued rosella parrots, and a scarred tree—a nod to the region’s indigenous community, which strips bark to make weapons. It took the artists—who go by The Zookeeper (Fergie) and Drap (Vinson)—21 days and 500 cans of spray paint to execute the piece, working from the basket of a long-armed crane.

Their sky-scraping efforts were worth it: “The Watering Hole” has been a lifeline for the community, and it was named the best work of public art at the inaugural Australian Street Art Awards in 2019.

“Thallon wasn’t a tourist destination at all before,” says Brosnan. “The mural now entices visitors to come out here and maybe spend a few bucks at the local pub. It has given locals a bit of hope for the future.”

Thallon’s mural is one of 30 larger-than-life works that have been painted on silos all across Australia over the past five years. Some go up on still-working agricultural sites, others decorate abandoned storehouses. Dotted along six driving trails in five states, the enormous paintings form a kind of open-air gallery crawl. It’d total 4,700 miles if all the silos were linked together—and someone had a lot of gas in their car tank.

From painted silos to tourist dollars

The idea of emblazoning outsized farm storage buildings with oversized art began in Western Australia in 2015, when a cultural non-profit called FORM hired well-known street artists Phlegm and HENSE to paint a series of linked silos in the town of Northam, 62 miles northeast of Perth in the Wheatbelt region. Phlegm covered one end of the 118-foot-high block with wry, black-and-white portraits of early aviators and balloonists; HENSE plastered colorful, abstract forms on the other.

Designed as a pilot project to bring art to rural regions, the stunt was a hit. It ignited a movement, with other towns in Western Australia’s Wheatbelt and beyond angling to get their own beautified silo—and to bring visitors and revitalization with it. Cultural grants and private commissions would fill rural areas with the kind of buzzy, bright art usually found in downtown alleys and warehouse-y neighborhoods. An added bonus? From Australia’s wide-open back roads, the silos could be seen for miles around.

“We didn’t set out to create a trail, but there was so much interest that we quickly realized there was a need for a coordinated approach,” says Rhianna Pezzaniti, project manager of what would become known as the Public Silo Trail connecting six painted silos in southwestern Western Australia.

Joining forces with a grain-growers cooperative, the CBH Group, which donated its in-use silos as canvases, FORM worked with rural communities to map out a driving route that made logistical sense for road trippers—while stimulating tourism in declining towns.

But this isn’t a sort of Picasso goes to the outback—these works tend to have hyper-local themes, and they’re often, but not always, created by Aussies. Artists consult townspeople to come up with imagery that suits the locale, from Melbourne artist Rone’s portrait of a farming couple on a Lascelles, Victoria silo and New York City artists Yok and Sheryo’s giant ruby seadragon decorating a silo in seaside Albany, Western Australia.

“People in the country don’t tend to have time for fancy art galleries, so we wanted to create artworks that reflected them,” says Shaun Hossack, founder and creative director of Melbourne art agency Juddy Roller, which has helped put 17 murals up on silos across the country, including a young girl playing in a wheat field by Cam Scale in Kimba, South Australia, and a multi-generational quartet of hat- and ballcap-wearing farmers by Guido van Helten in the Victorian town of Brim. (Van Helton, known for photo-realistic portraits, is something of an international silo star, with works on towering structures in Fort Dodge, Iowa, and Jacksonville, Florida, too.)

While painting silos isn’t a huge stretch for street artists accustomed to large-scale projects, they do face challenges—Cirque du Soleil-like scaffolding, paint that dries slowly due to moisture or wind, uncomfortable weather. “Guido painted the Brim silo at Christmastime, when it’s stinking hot,” says Hossack. “He had to get up before dawn, work until around 11 a.m, then go back in the evening.”

While the silo trails may be far apart geographically, it’s easy to get a picture of what they look like—and where to find them—thanks to two “grey nomads” from Western Australia.

Setting out in their 1992 Toyota Coaster in late 2018 for a fishing trip, retirees Annette and Eric Green detoured to see the painted silo in Tumby Bay, South Australia. They were so taken with Argentinian artist Martin Ron’s image of two boys jumping into the ocean that the couple hit the road to see more art.

“After we finished our fishing trip and were deciding where to go next, I thought, well, there’s some silos in Victoria–let’s go there,” says Annette. Frustrated by a lack of online information about the silos, Annette created a Facebook page to guide other roadtrippers and launched the Australian Silo Art Trail website in 2019 to document the trails on a national level.

“It has taken us to so many places we never would have thought to visit,” she says, adding that the economic impacts of the art are also being felt beyond the silo towns. “There are often a couple of towns between each silo. That means more people stopping for fuel or a meat pie, which helps to support the small businesses keeping some of these towns alive.”

And while most of the regions with silo art weren’t affected by the recent bushfires, many of the farming communities with the murals remain in the grip of drought. This means that in places like tiny Grenfell, 224 miles west of Sydney, a silo mural commissioned by a local grain company owner hasn’t only served to beautify the town, it’s been good for commerce. “It’s given the regional economy a sorely needed boost,” says Auburn Carr, a tourism officer for the region. The number of visitors to the town has climbed 54 percent since it got a silo in 2019.

It’s a similar story in other silo towns across the country, with increased tourism helping struggling businesses stay afloat and giving some locals the confidence to open new ventures. Take the Store Café in Pingrup, Western Australia, which was started by a group of local women in the spring of 2018, around the same time the town’s silo was painted. “Before the café opened, there was nothing in Pingrup—you had to travel 31 miles to get milk and bread” says Pezzaniti. “Now there’s this hip spot travelers can stop for a homecooked meal.”

Take a tour of seven of the world's best cities for street art with a conscience.

Annette Green’s website also features more than 60 painted water towers, which include designs from humpback whales in mid-breach (Slade Point, Queensland) to Aboriginal pieces depicting spiritually significant wildlife (Larrakia, Northern Territory). “Some of these artworks are just as big and impressive as the works on the silos,” she says. “Many are located near the silos, so seeking them out adds another dimension to the journey.”

It’s all inspiring return visits by day trippers and artists alike. Fergie and Vinson got to know the locals in Thallon so well while painting “The Watering Hole,” that they’ve returned to do additional murals—including a portrait of a local man on a pillar underneath a railway bridge. In true street-artist fashion, the pair stealthily created it in the wee hours as a surprise for the town.

“We got busted by a local in the middle of the night, but when he realized what we were doing he was like, ‘oh cool, carry on,’” says Fergie, who became so enamored of the laid-back town that he plans to marry his girlfriend at its pub when the lifting of COVID-19 restrictions allow it. “There are about 20 pillars under that bridge,” he adds, “so we’ll definitely be back.”

Sarah Reid is an Australian travel writer who frequently contributes to National Geographic. Follow her on Instagram.