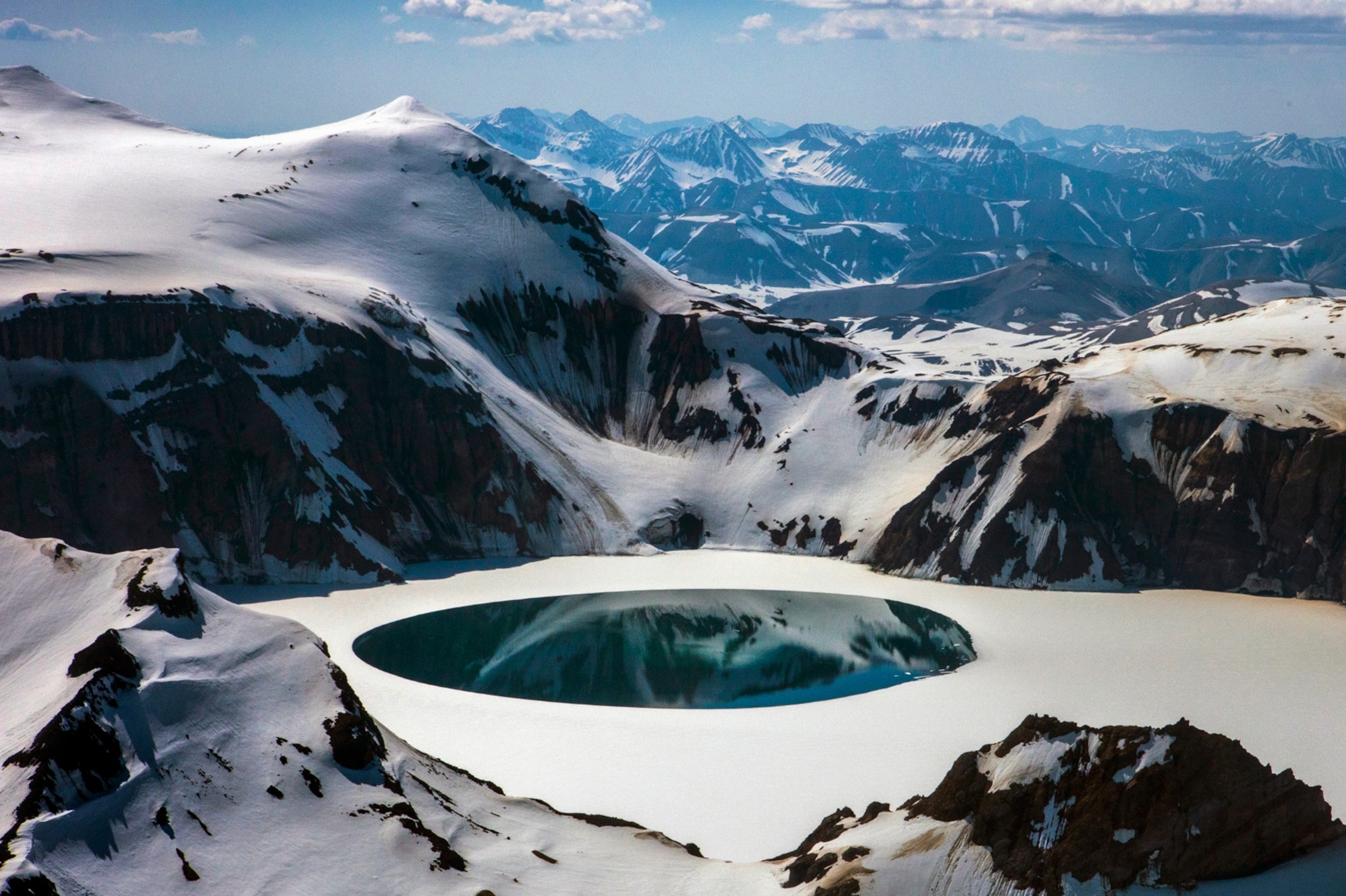 Retracing the explosive history of a remote national park in Alaska

On a 200-mile trek in the Katmai Preserve, archaeologists document life before the largest volcanic eruption of the 20th century.

In 1912, an eruption of the volcano Novarupta formed the caldera and crater lake at the summit of Mount Katmai. A 2018 expedition set out to uncover traces of Katmai National Park’s history before the massive explosion.

Standing on a beach in late May 2018, surrounded by her team members and gear, Laura Stelson thought, “What have I gotten myself into?”

An archaeologist who started working for Katmai National Park & Preserve two years earlier, Stelson was about to lead a four-week expedition, retracing historic routes by a National Geographic explorer in the 1910s. The modern-day expedition’s goal was to find and manage evidence of the trips a hundred years ago as well as the populations that had lived in the area before it was forever changed by a massive volcanic explosion. Stelson’s expedition would cover at least 200 hiking miles, using eight different base camps along the way.

The nearly 5 million acres of the combined park and preserve—more than three times the size of Grand Canyon National Park—sit about 290 miles southwest of Anchorage. There are no roads into Katmai, most of which is designated wilderness where no hunting is allowed. The only way in is by boat or float plane.

For most travelers to the park, Katmai is mainly a chance to visit a 1.2 mile-long fishing hole for brown bears that, thanks to the Bear Cam and Fat Bear Week, has become an internationally celebrated phenomenon.

(Related: Alaska is the best place to see wild bears—but this mine could threaten them.)

The developed section of the park, Brooks Camp, hosts overnights in cabins and a campground, as well as daytrippers who fly in to ogle brown bears from viewing stands. Although Brooks Camp usually opens June 1, the coronavirus pandemic is delaying the 2020 opening by one month. Visitors still up for travel to the park can book day trips or overnights for July 1 and beyond.

The lodge and campground are a short walk from the river where 40 or so of the park’s 2,200 resident bears bulk up for the winter. The most popular viewing area for visits overlooks the falls where bears wait around in the hopes of turning a leaping salmon into one of the day’s many meals.

But the delay in opening gives travelers considering a trip to Katmai time to go beyond the bears, to find out more about the Valley of Ten Thousand Smokes, the area that inspired one scientist a hundred years ago to fight for protection for the land.

Going back in time in the backcountry

Although Stelson had been preparing for months and had some previous backpacking experience, her trip through both the Katmai River Valley and the Valley of Ten Thousand Smokes was far and away the most ambitious backcountry adventure she had ever set out on, let alone led.

“Certainly nothing on the scale of having a bush plane drop me off in the middle of nowhere in Alaska and having to hike my way out over three weeks. I was very overwhelmed by that prospect,” says Stelson.

Zoom in to see Brooks Camp, the Valley of Ten Thousand Smokes, Novarupta, and Katmai Pass.

The team included a rotating cast of nine people, some who arrived along with new supplies by float planes.

But most of the travel was by foot. While nobody sensible would label any backcountry travel in Alaska a walk in the park, Katmai’s terrain adds extra challenges—and rewards.

“Katmai is a very unique place with all these different types of landscapes presented in one single park,” says Stelson. “You have coastal beaches. You have tundra. You have spruce forest, mountains, volcanoes, and you have this weird desert. So there’s just a lot of environmental diversity and diversity of experiences.”

Beyond Brooks Camp, most of Katmai is truly wild. (Although even Brooks can feel very wild when rangers call out to head inside because a few sizable brown bears are racing between the buildings.) And Stelson and her team were heading deep into those wilds to repeat the route that scientist Robert Griggs followed during four expeditions 100 years earlier.

“It was four years of expeditions we were trying to cram into four weeks,” she says.

Griggs, a botanist, started exploring the area after the 1912 eruption of Novarupta, the largest volcanic eruption of the 20th century. Over 60 hours, Novarupta released so much magma that, eventually, the ash made its way all around the world. And it blocked all sunlight from filtering through to Kodiak Island, which sits 83 miles from the volcano, for three days.

(Related: Here’s why Mount St. Helens isn’t where it should be.)

On one of Griggs’ early expeditions, he noticed steam curling out of a fumarole in the area of the volcano. Then he noticed a few more. And even more.

Griggs was thrilled. “It was as though all the steam engines in the world, assembled together, had popped their safety valves at once and were letting off surplus steam in concert,” he later wrote.

The landscape so moved him that, along with the backing of the National Geographic Society, Griggs lobbied to protect the area and have it declared a national park. He called it a “living laboratory [where you] could watch life colonize this otherwise completely barren landscape” of pumice and ash, says Stelson.

Stelson’s motive for exploring the area was to learn more about Griggs’ expeditions as well as the village and people who lived in the area before the eruption.

“There were indigenous people that lived [there]," says photographer Katie Orlinsky, who documented Stelson and her team, but their communities were displaced and re-established away from Novarupta after the explosion.

Stelson hopes one day to find the right technology to scan what lies underneath the pumice and other rock that covers the otherworldly landscape. (NASA has used the area to train astronauts for space missions.)

Maps played just one role in plotting the route the group took during the trip. Traversing a landscape that has seen major shifts due to climate change and other environmental factors requires other guidance. So Stelson and her team relied on photos from Griggs’ expeditions to figure out where Griggs’ group had hiked and set up camps.

“We tried to put ourselves as closely as we could to their position,” she says.

The team also tried to reshoot many of the photos, known as repeat photography, to document a century of erosion, vegetation regrowth since the eruption, and glacial melt.

But thanks to those very same environmental changes, repeat photography didn’t make for easy navigation.

“It added a lot of detouring and it put the landscape into perspective. We would hike four kilometers to the spot we thought was going to be the photo retake point, and then realize that we were still way off,” says Stelson.

Along with the work, Stelson says she had the chance to see some of the most stunning places imaginable. Her favorite was Katmai Pass. The land was still covered by snow and ice. Nobody expected to find much life there.

“We wound up finding these hot streams that were flowing through the snow and keeping things green,” she says. The group also saw caribou and bears. “Everything around it was this kind of splotchiness of gray and white, with this weird little thread of life cutting through.”

It was details like that thread of life that pushed Stelson’s early fears away.

By the time the expedition wrapped up, her relationship with the park had deepened to something that will last throughout her life. “Now I’m going back as often as I can,” she says.

Anchorage-based writer Jenna Schnuer covers travel, culture, science, and more. Find her on Instagram.
Photographer Katie Orlinsky, based in New York City, has covered the Arctic for more than five years. Follow her on Instagram.