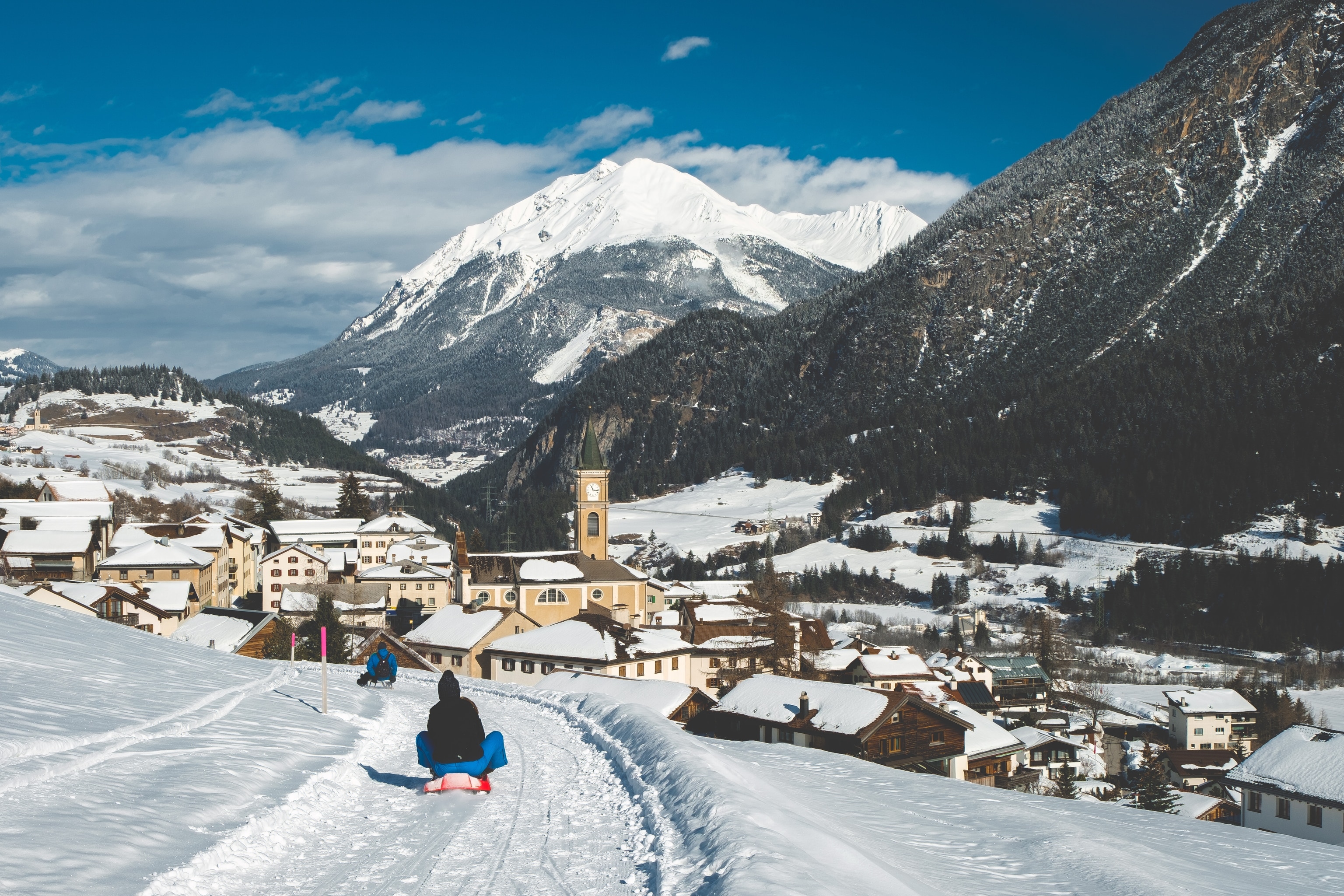 In Switzerland, sledding is a national pastime

With an Alpine sled train, runs inspired by video games, and 150 dedicated tracks, Switzerland is a sledder’s paradise.

Sledders head downhill on a run near Riom, Switzerland. In the winter, Alpine towns in the country’s Graubünden canton region feature both skiing and sledding.
Photograph by Markus Gebauer, Getty Images

Anyone who has ridden a proper sled downhill has probably heard the whispering whoosh of steel blades as they speed across snow. It’s a soundtrack that locals and tourists experience every winter in Graubünden canton, a mountainous sledder’s paradise in eastern Switzerland.

I went there in January to experience the country’s lesser-known alternative to its national sport, alpine skiing. Switzerland’s mountains and urban foothills provide more than 150 dedicated sled runs (schlittelwege in German), unspooling across 385 miles of snowy terrain.

Sledding’s skill set is more basic than skiing. (Even young children can do it, especially on a sled with a parent.) Sit down, push off, and use your feet to brake. But the sport requires no small amount of nerve on steeper runs.

Like skiing, sledding comes with its own culture and bonhomie. “It’s about family and friends enjoying nature together,” says Simon Engel, a historian at the website Swiss Sports History. “You meet to socialize on the hill.”

Here’s how to experience both the traditions and the thrills of Swiss sledding.

The world’s first recorded sleds can be traced back 4,000 years to ancient Egypt, where laborers pulled them across sand made slick by water, hauling stones to build the pyramids.

Zoom in to see more locations on the map.

In Switzerland, farmers used sleds to transport timber or carry food to their animals for centuries. In the late 19th century around St. Moritz, the arrival of British tourists turned schlitten into downhill pleasure rides. In the years since, sledding has spread from the Alps and the lower plains of the Jura mountains to urban areas such as Zürich, where you can toboggan down Uetliberg.

Travelers can find sled runs across the country via SwitzerlandMobility, a national network of non-motorized routes for activities including hiking, cross-country skiing, and sledding. Routes are ranked by difficulty; 38 of the runs are illuminated at night, too.

Switzerland’s sledding routes can be reached on foot, by chair lift, gondola, cable car, funicular, and, in one place, by the world’s only “sled train,” the cherry-red schlittelzug. It’s what I rode to get between the small Graubünden town of Bergün to the even tinier hamlet of Preda, the pushing-off point for one of the world’s most scenic and heart-pounding sled runs.

The 17-minute schlittelzug trip goes along one section of the UNESCO World Heritage-recognized Rhaetian Railway route, a historic transalpine railroad, known for vertiginous mountain passes and staggeringly tall bridges or viaducts. My train ride gives me a preview of the landscapes I’ll soon be zooming past on Switzerland’s most famous sled run, the Preda-Bergün Schlittelbahn. A mountain pass during warmer months, the route is closed to vehicular traffic in the winter.

Hati Widoner rents me a wooden rodel sled from his shop when I arrive in Preda. Rodels have a flexible seat slung between two moveable wooden runners, their lower parts covered with steel blades for speed.

“It’s like riding a horse,” he says, putting the sled’s rope “reins” in my hands as I sit on the yard-long sled. “When you want to go right, pull right.” Widoner also shows me how to position my feet straight ahead, the better to use them—ack!—to brake.

Seasoned sledders keep their feet locked in position toward the front of the rodel’s runners, using body weight and gently pulling on the rope to turn. I plant my boots lightly atop the snow on either side of the sled, ready to use them to stop during my first “easy” run. Somehow, I clock nearly 30 miles per hour.

At the bottom of the run in Bergün, there’s a steepled 15th-century medieval church, locals pulling groceries (and kids) atop sleds, and a two-seater chairlift to the top of the town’s more challenging sled run, Darlux-Bergün.

Darlux-Bergün gets a “moderate” ranking from SwitzerlandMobility. But icy conditions make it feel challenging, as my sled veers into runaway ramps on tight corners.

Sledding is not without its risks—you can get hit by other sledders or careen out of control. Rental shops in Bergün and other locations teach beginners the basics, including heading to the side of the run if you wipe out, keeping pace with other sledders, and wearing a helmet.

“When you go up the chairlift, you hear all these screeches below you,” says Nicholas Houghton, a British artist I met in the dining room of the Kurkhaus Bergün, the marvelously restored Art Nouveau hotel I bunked at in town. “It’s 50 percent terror and 50 percent pure pleasure.”

(These are the best cross-country ski trails in the U.S.)

Houghton, 69, first visited Bergün (population roughly 500) in 1990 and got hooked. He returns every winter. “I took to sledding,” Houghton says. “The first few years were the best and the worst because I couldn’t control the sled properly. Then I learned to brake.”

My braking skills are still evolving when Houghton and I go on a night sled ride together on the Bergün-Preda run. Our route, magical in the darkness, slides past the illuminated stone arches of viaducts and under the glinting stars.

While railroads brought sledding to Bergün, a 19th-century pandemic was partially responsible for the sport’s popularity in nearby Davos.

“People were coming here to sanatoriums to be healed of tuberculosis, and that’s when sledding for pleasure really started to take off,” says Ursula Bevan, a docent at the Wintersport Museum Davos on the town’s main drag, the Promenade. The tiny museum is full of antique sleds, ski equipment, and vintage photos of famous visitors, including Arthur Conan Doyle, who stayed in Davos while his wife was recuperating from tuberculosis.

In the 1870s, around the same time that downhill skiing first started gathering momentum in the now famous resort, English tourists (including TB patients) began riding wooden sleds for fun. “Usually, they were staying at the hotels or the clinics, and they would just sled wherever,” Bevan says. “Any old hill would do.”

Davos townspeople, accustomed to using sleds for work, joined the visitors in friendly races, and the sport really sped off. Davos’ original sled run, first employed for bobsled races that finished right along the Promenade, is still active.

Today, a funicular takes sledders from central Davos to Schatzalp, where a historic hotel by the same name was once one of the area’s most luxurious sanatoriums. Today, it’s the departure point for a gently curving, 1.7-mile sled route past snow-laden fir trees and back down to town.

For sledders in search of something more thrilling, the 2.3-mile screamer at Davos’ Rinerhorn ski area offers 33 tight turns; they’re banked in snow to keep patrons from careering off the mountain.

While the town’s rental shops hire out easier-to-maneuver rodel sleds, many people ride traditional “Davos sleds,” a point of pride and a bit of living history.

Davos sleds are made from ash wood with three short middle boards across the top, a rope affixed to a central point, and steel blades that curl up and around the top of the runners. Their seats are hard and their runners are fixed in place, meaning they are less nimble than rodel sleds.

Davos sleds, never trademarked, are produced all over Switzerland (and beyond)—but at only one place in Davos itself. At Ardüser Schreinerei, Remo Brülhart assembles about 25 sleds each winter using a design based on historical photos and records.

When sledding becomes a game

Though Swiss sledding seems rooted in tradition, the sport inspires innovations, too. Take the Light Ride, an interactive, nighttime sled run launched in 2020 in Lenzerheide, less than an hour’s bus ride west from Davos.

The seasonal run, inspired by video games, equips both the course and its sleds with sensors and sound effects. Sledders streak along, sliding over sensors or punching soft targets with their gloved hands to win points.

“I had the idea one evening around the fireplace how to create more action on the track,” says Stephan Koritsch, a project manager for No Ordinary Art who dreamed up the attraction. He wanted to make sledding both more challenging and appealing to young people.

On the night I sled through the Light Ride, I feel like a kid again, veering to “catch” emojis projected on the snow and whooping my way through tunnels of geometric neon light.

When I fly back to the United States the next day, the immigration officer has a question.

“What was the purpose of your travel to Switzerland?” she asks.