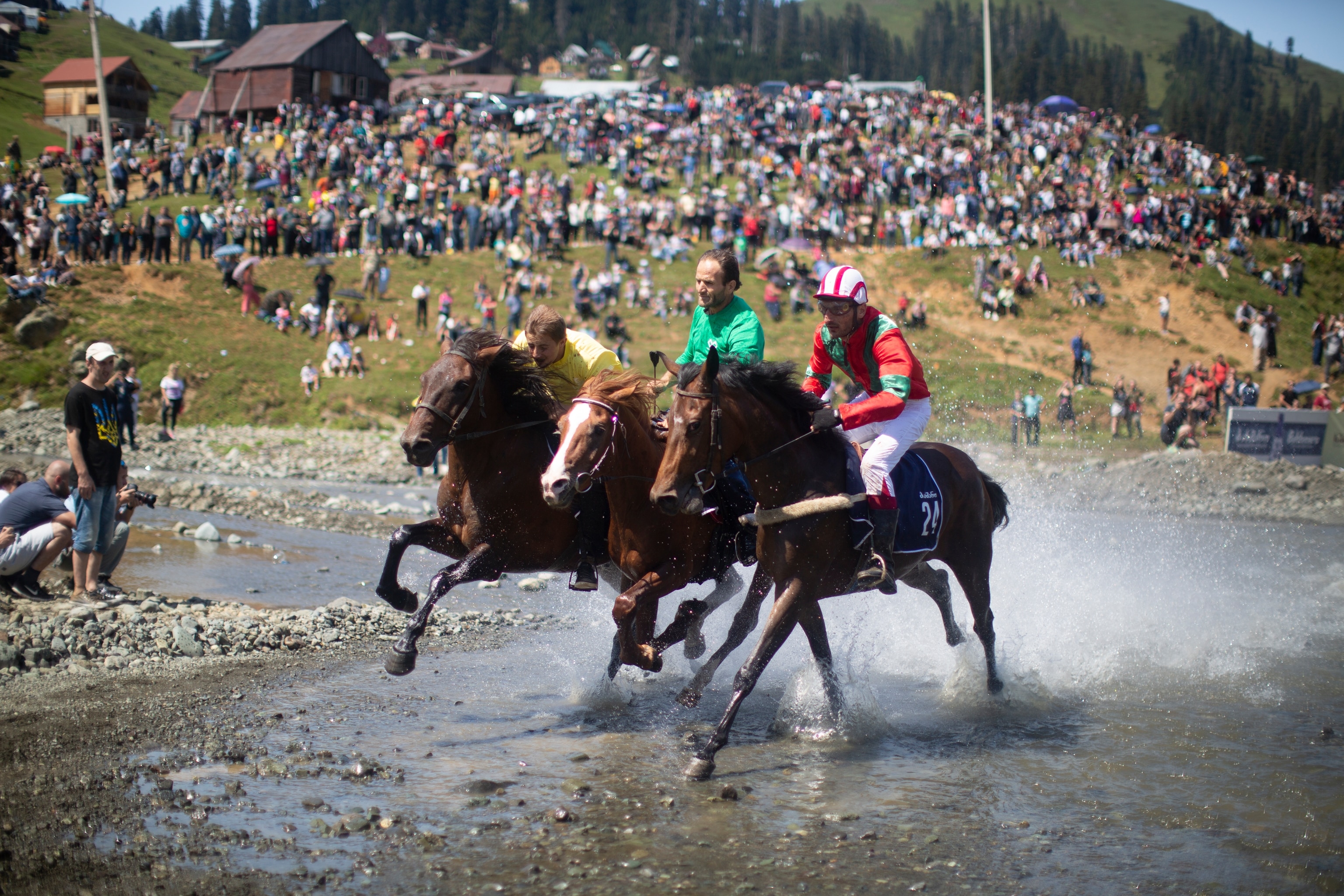 Four seasons of culture in Georgia

From the gregarious hospitality underpinning the Georgian supra feast to the passionate artistry of local music and dance, Georgian culture is a year-round proposition.

Horse racing is a popular sport throughout the Georgian mountains.
Photograph by Aaron Huey
This is Paid Content for Georgia Tourism. The editorial staff of National Geographic was not involved in the preparation or production of this content.

Travelers to the country of Georgia often return heaping praises upon Georgian food, Georgian wine, and the beauty of Georgia’s nature. But, invariably, the people who fall in love with Georgia praise something else, too: the richness―and exuberance―of Georgian culture. Although contemporary Georgia has been influenced over the centuries by a variety of sources—areas within the modern-day country at various points have been part of the Persian, Byzantine, Arab, Mongol, Turkish, and Russian empires—Georgian culture remains distinct. From the musical tradition of polyphonic singing to the fervent dictates of hospitality that ensure that every supra (feast) to which you’re invited will involve a staggering abundance of food, the rich artistic, musical, and effusive culture of Georgia draws visitors back time and again to this Black Sea nation. And celebrations—particularly when they provide the opportunity for a supra, with plenty of toasting of homemade wine—are some of the best ways to experience that culture. Luckily, the Georgian calendar is sufficiently filled with opportunities to celebrate; almost any time of year that you head to Georgia, you’ll be able to throw yourself into one party—or several! We’ve compiled a season-by-season guide to the best cultural festivals in Georgia.

Head to Georgia in early January, and you’ll find the whole country getting ready for a feast. The Georgian Orthodox Church, like other Eastern Orthodox churches, celebrates Christmas according to the Julian calendar: on January 7. Join in the festivities by heading to Tbilisi’s “Christmas Town” in Dedaena Park, which remains open until the Orthodox New Year on January 14; here you can enjoy concerts, theater performances―and a glass of hot glühwein, a German specialty embraced by Georgians. Visit one of the city’s many Christmas markets or attend a candlelit midnight Mass on Christmas Eve. Among the most traditional elements of a Georgian Christmas is the making of chichilaki, small “Christmas trees” of paper-thin wood made from branches of hazelnut or walnut trees whose distinctive appearance is said to be based on the curly beard of St. Basil the Great. And the traditional Alilo, a procession in which participants march through the streets carrying gifts to distribute to those less fortunate is another much loved custom. Suppressed during the Soviet era, the Alilo tradition has been revived in recent decades, particularly in Tbilisi, where a giant costumed celebratory parade takes place on Christmas Day featuring participants dressed as Bible characters from the Nativity or wearing distinctive national dress.

One of the loveliest times to visit Georgia, due to the mild and balmy weather, spring is also one of the richest in cultural offerings. There’s Orthodox Easter, of course―among the most sacred holidays in the Orthodox Christian tradition, it is celebrated even more fervently than Christmas. On Good Friday, which commemorates Jesus Christ’s death, locals often dye Easter eggs red—symbolizing the blood of Christ—and bake the traditional Easter bread known as paska, which will be eaten in the days to come. Saturday often involves a midnight Mass—a perfect opportunity to hear the singing of Georgian religious music, in particular the polyphonic style popular with professional choirs and pious locals alike. Then celebrate Easter itself on Sunday, when Georgia’s cities and villages are filled with friends, neighbors, and even strangers greeting each other with the proclamation “Kriste aghdga” (Christ is risen). If you prefer to listen to Georgian music in a more secular setting, however, consider visiting Tbilisi in May for the International Rhythms of Spring folklore festival, an annual celebration of traditional Georgian music and dance. Featuring choral and dance groups from across Georgia, each with their own distinct regional sound and specialties, the festival is an ideal way to get a sense of the diversity of Georgian regional culture.

The warm summer months are another great time to visit Georgia’s mountain regions—which are sometimes unreachable during the snowy winter season. Luckily, summer is also the ideal time to experience a number of local mountain festivals. Each region―and sometimes individual towns―host their own celebrations, meaning that whenever you’re in Georgia, there’s almost certainly a festival to attend. Both Tushetoba, which takes place in the Tusheti region in late July or early August, and Shatiloba, which takes place in late summer in the region of Khevsureti, commemorate the highland culture of their particular region with local folk songs and dances, daring horse races, and other athletic competitions. While it is, of course, possible to purchase locally made products, such as the highly ornate woven wool garments popular with both Khevsur and Tush highlanders, many festivals often include some informal demonstrations of traditional Georgian cooking or artistry—from cheesemaking to embroidery—allowing you to try your own hand at Georgian craftsmanship.

Wherever and whenever you go, expect to drink copious amounts of local homemade wine or the signature local spirit: chacha. If you’re planning to stay in Tbilisi, however, you can still hear plenty of Georgian folk music; head to the annual Art Gene Festival, held among the medieval stone towers and restored houses of the city’s open-air Ethnographic Museum, to learn more about regional Georgian life, culture, and art.

As the blazing heat of summer recedes, autumn in Georgia offers a temperate climate—along with the all-important wine harvest, which traditionally takes place annually in September but can begin as early as August. If you’re interested in Georgian viniculture, head to the regions of Kakheti, in the southeast, or Racha-Lechkhumi, in the northwest, for the Rtveli Festival, a local harvest holiday. Wineries across Georgia celebrate Rtveli in September and October with singing, dancing, and (what else?) plenty of drinking. Popular Rtveli activities include the making of churchkhela, a popular Georgian candy made by slowly dipping walnuts in highly concentrated grape juice; dance workshops and demonstrations; and, of course, grape picking. Some wineries even allow guests the opportunity to pick grapes alongside workers during the Rtveli season; be sure to call ahead to check. Wherever you go, if you make friends with locals, you’re almost certain to be invited to join at least one supra—a feast marked by plenty of food and wine and by the formalized toasting ritual in which a tamada (toastmaster), usually the most senior person at the table, leads friends and family alike in a series of poetic speeches praising everything from friendship to family to guests to the nation of Georgia itself.

If you’re keen to stay in the capital, however, consider visiting Georgia during the annual Tbilisoba festival, which takes place in October. A festival to commemorate the founding of the nation’s capital in the fifth century, Tbilisoba is a relatively recent celebration, dating back only to the late 1970s. Since then, however, Tbilisoba has become a vital part of the city’s social fabric: simultaneously a harvest festival and a celebration of Tbilisi’s—and Georgia’s—centuries’ worth of history. The winding, pastel streets of the city’s historic Old Town fill with locals in traditional attire, including men wearing the distinctive chokha, while children make and wear flower crowns, and music and dance performances—both traditional and contemporary—take over the city’s many parks.

At National Geographic, we want to inspire your next adventure but only when it is safe and advised to do so. Before you travel, check local and national Government guidelines for Covid-19.