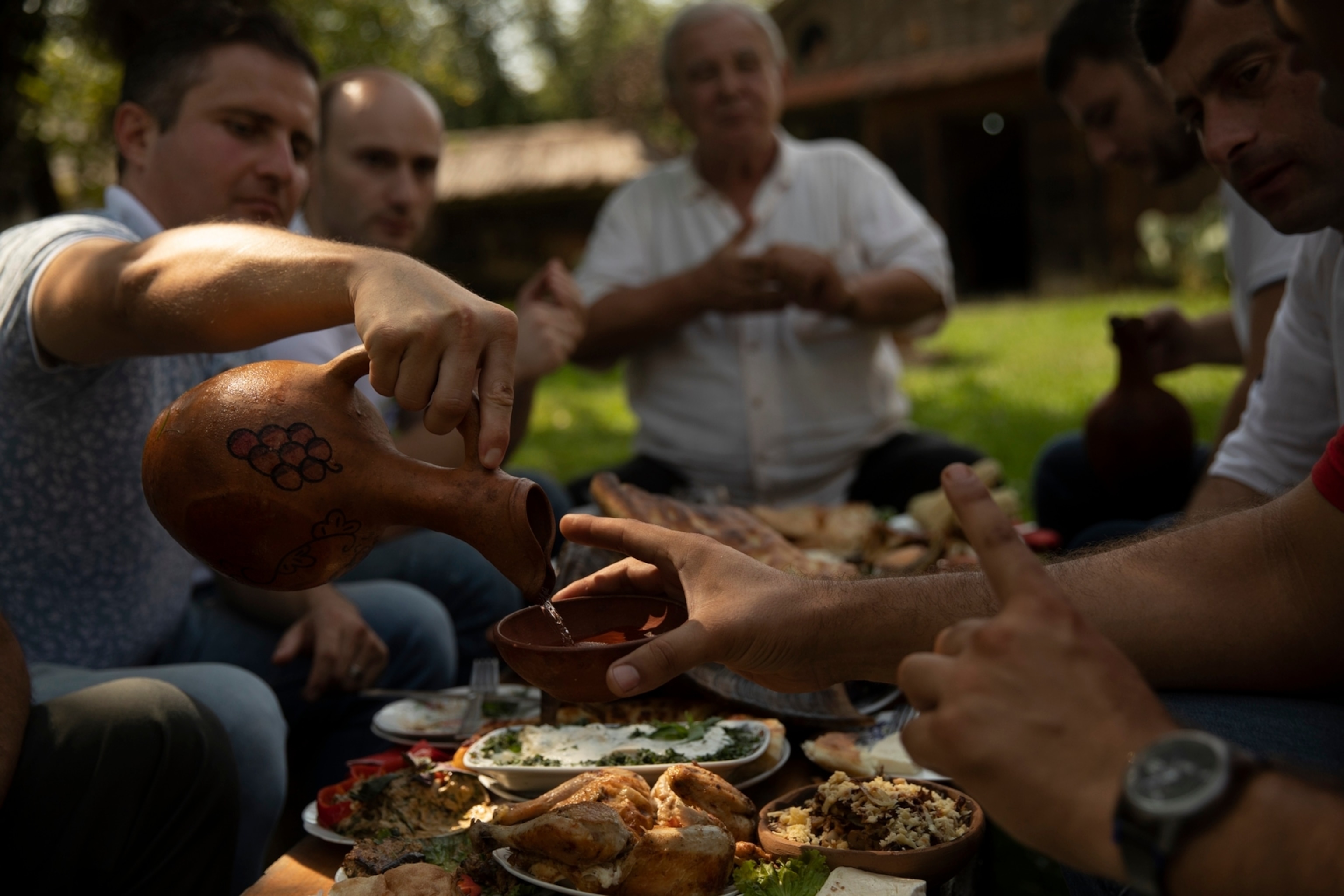 5 things to know before your first Georgian feast

Discover the traditions and flavours in this unique display of Georgian hospitality.

At Georgian feasts, known as supras, wine flows freely—according to superstition, you toast your friends with wine, but your enemies with beer.
Photograph by Aaron Huey
This is Paid Content. The editorial staff of National Geographic was not involved in the preparation or production of this content.

Spend more than a couple of days in the country of Georgia, which borders the Black Sea and the Caucasus mountains, and chances are you’ll find yourself invited to a Georgian feast. This multi-hour, multi-course supra — which translates literally as “tablecloth” — is one of the most vital (and dynamic) events in Georgian culture. Whether Georgians are celebrating a birthday or a marriage, a regional holiday or professional success, the festive, wine-fueled supra keeps the community together.

A popular Georgian legend illustrates the importance of the supra in Georgian culture. When God created the world — so the myth goes — He apportioned the different regions of the world to different cultures. But the Georgians, they say, were late to the meeting. They arrived breathless and apologetic, and explained that they’d been celebrating a supra the night before, and due to the night of revelry they slept later than they’d meant to. God, the Georgians say, was so touched and impressed by their honesty that He gave the Georgians the most beautiful land of all: the part of earth He was saving for himself.

In my time in Georgia, I’ve been invited to dozens of supras — not only by friends or neighbors but at times by complete strangers. I’ve been walking in the Georgian mountain province of Khevsureti during the festival of Shatiloba (an annual summer festival of folk music and dancing, horse racing, and Georgian wrestling), only to have a group of teenage girls pull me into a local dance and ply me with wine, before inviting me to join their meal. I’ve stepped out onto my terrace to do laundry only to have the woman who lives next door insist I join her in celebrating her son’s birthday next door. But in order to survive a supra without too much of a hangover, it’s important to know a few things in advance.

1. There will be more food than you can possibly eat

When you arrive at a supra, there will likely be many dishes laid out, family-style, on the table. Creamy nigvziani badrijani — fried eggplant rolls filled with a garlic-walnut paste — is a staple at supras, as is the classic Georgian salad of fresh tomatoes, cucumbers, walnuts, cold pressed sunflower oil, and local herbs. But, more often than not, this is only the beginning. From mtsvadi — barbecued meat, often served with tkemali (sour plum sauce) or spicy adjika (a red or green chili) — to chakapuli (lamb, plum, and tarragon), to the ubiquitous khachapuri cheese bread, a Georgian supra will likely contain a seemingly infinite number of dishes. Georgian hospitality dictates that a guest should never be left wanting — so avoid fully cleaning your plate unless you want several more servings heaped upon you. (I’ve never quite figured out the key to turning down at least three servings, though).

2. Follow the lead of the tamada when you drink

Traditionally, the oldest or most esteemed man in the room serves in the role of the tamada, or toastmaster. The tamada presents a series of lavish toasts throughout the evening — some of which are more formal and structured (toasts to Georgia itself, to God, and to peace, usually start the evening), and some of which are more flexible. (As the evening wears on, and the wine flows freely, the structure tends to be looser, the toasts ad libbed). While, traditionally, drinkers would drain their glass (or, if keeping with tradition, drain their ram’s horn) with every toast, this isn’t always done now.

Towards the end of the evening, though you may find yourself drinking the much stronger chacha, a grappa-like liquor, made from the skin of grapes (it’s often – though not always – homemade) While I’ve seen Georgian men down ten shots or more with no ill effects, be careful: it’s dangerously potent.

Khinkali — dumplings that resemble Chinese soup dumplings, filled with spiced meat and broth — are among the most iconic Georgian dishes. They’re also difficult to eat. Resist the temptation to take a fork or knife to them — this spoils the juicy goodness inside. Instead, wait until they cool, then pick the dumpling up by the doughy khinkali “stem.” Take a tiny bite out of the dumpling and suck the broth out through the hole before eating the meat. Leave the stem untouched — it’s considered impolite to eat the whole thing. Plus, after a meal, Georgian men sometimes like to count how many khinkali they’re able to consume at one sitting.

4. Don’t fill up on khachapuri

Georgian bread is some of the best in the world. And khachapuri – Georgian cheese bread – might be the most delicious of all. There are numerous regional varieties, from the relatively restrained Imeretian khachapuri (only filled with cheese) to the more decadent Megrelian khachapuri (both filled and topped with cheese) to the absolutely over-the-top Adjarian khachapuri (the bread is hollowed out, then filled with a gooey mix of cheese and butter, with an egg added into the mixture). Khachapuri is usually a heavy lunch on its own, but at supras it’s often considered a side dish or an appetizer. Don’t make the mistake of having more than a few bites – only to discover that the main meal is still coming.

5. Thank your hosts – they’ve probably made everything from scratch

While some Tbilisi supras take place in restaurants, the true supra is a thoroughly home-based affair. If you’re lucky enough to be invited to a village supra, chances are that almost everything you eat, from the tonis puri (a bread cooked by being thrown against the walls of a kiln) to the wine you drink to the grilled meat in your mtsvadi, comes from your host’s garden (or at least, their next-door neighbor’s garden). Even in Tbilisi, plenty of Georgian hosts get the best meat, cheese, or fruit not from the supermarket but from regular deliveries from their cousins in the country. (I once had friends that only ever drank farm-fresh milk, hand-delivered by an elderly friend from their village.) Consider bringing a small gift, such as sweets or flowers, as a gesture of thanks. Avoid bringing more food, however, which might imply that you don’t think there will be enough on offer – at a Georgian feast, there’s always more than enough at the table!