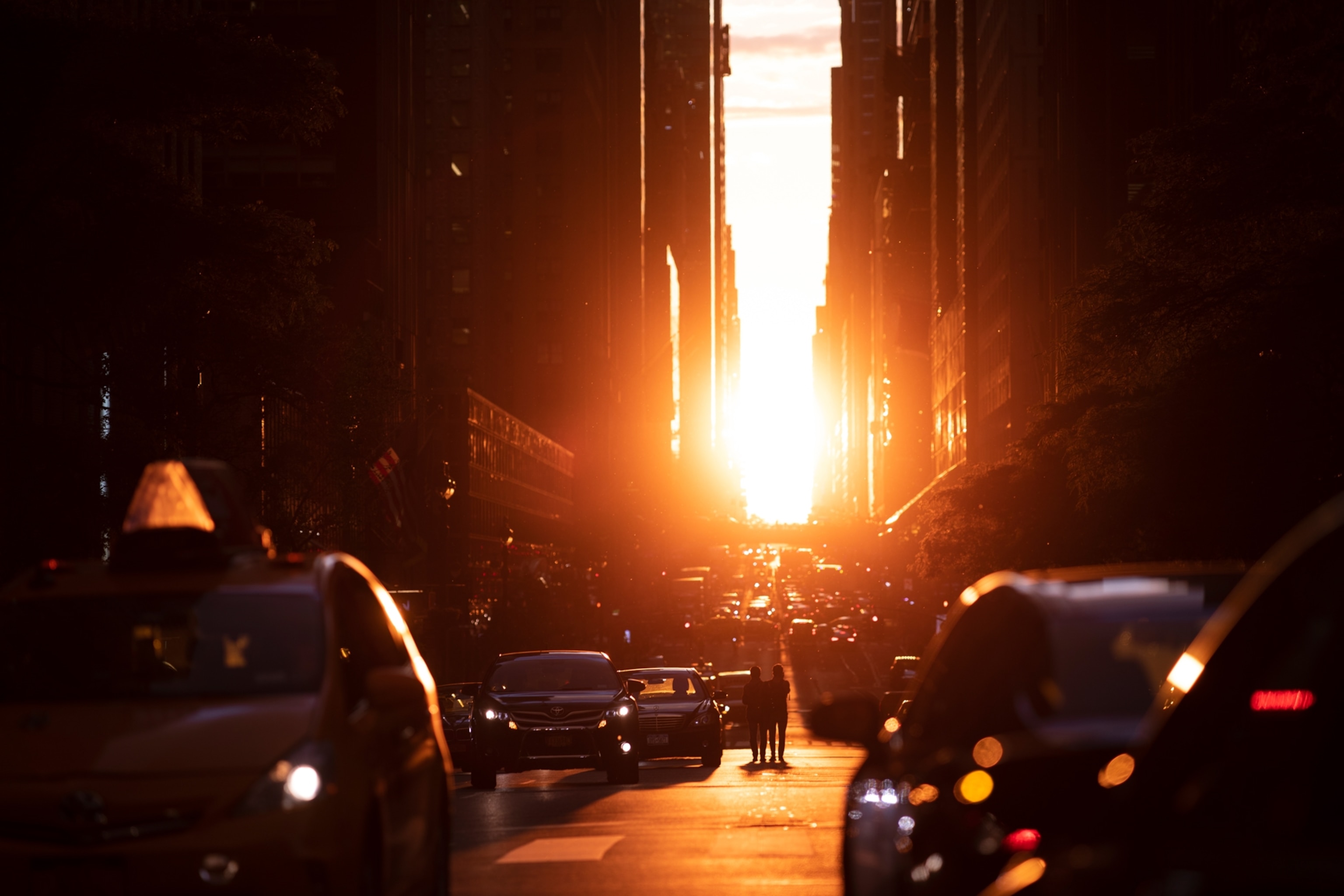 NYC’s best sunset and 9 other ways to celebrate summer

The sun sets between buildings of midtown Manhattan during the phenomenon called Manhattanhenge.
Photograph by Marcaux, Getty Images

After weeks of lockdown, travel destinations are taking cautious steps toward reopening. Although most of us are staycationing near home, wonder can be found just about anywhere. New Yorkers can gaze at an astronomical marvel, Londoners can view their landmarks by cycling through a planned car-free zone, and everyone can see the world through the eyes of photographer Bao Ngo, who turns Google Street View screenshots into art.

On Friday, May 29, the setting sun will align perfectly with the city grid of Manhattan, bathing the borough’s cross-streets in a golden glow. This phenomenon—named Manhattanhenge by astrophysicist Neil deGrasse Tyson when he began calculating the dates as head of the American Museum of Natural History’s Hayden Planetarium in the late 1990s—provides perfect sunset views from perches on the city’s east side with clear sightlines toward New Jersey.

The spectacle was made possible when city planners set Manhattan’s grid at 90-degree angles in the 1800s, explains Jackie Faherty, an astrophysicist at the American Museum of Natural History, who now calculates the event’s dates. Although most people think of the sun setting in the west each evening, it sets due west only twice a year, on the equinoxes. During the rest of the year, the sunset moves slightly north across the horizon until the summer solstice and then heads south again. If New York’s grid had been oriented due north, Manhattanhenge would take place on the equinoxes. But the city was built on a slight tilt, about 30 degrees east from geographic north. If you see it this year, be sure to practice social distancing. If you miss it, the next Manhattanhenge occurrence will be July 12, 2020.

Google Street View photography surfaced soon after the technology was released, with artists including Doug Rickard and Jon Rafman building creative works based on carefully curated screenshots and museums including MoMA featuring the art in exhibitions. During the lockdown the concept of turning data into art has gathered renewed resonance.

“It feels a lot like treasure hunting,” photographer Bao Ngo says of finding just the right images, which she then screenshots, crops, and sometimes color corrects to create her artworks. The results of her labor are a modern variation on found art in the era of surveillance capitalism—each image painstakingly unearthed by Ngo from some Colosseum-sized server warehouse. She has recently been to Texas, the Faroe Islands, and Vietnam, all without leaving her Brooklyn apartment.

Her low-resolution screenshots are a departure from the sharp, megapixel-rich fare of most travel photography, but they are often very intimate, with quiet composition, washed-out tones, and soft edges. The subjects in the photos—bystanders picked up by the ubiquitous Google camera trucks—recall a time before words like quarantine, viral shedding, and N95 entered the cultural lexicon.

Be a happy camper

With the new 2-Day Camp Meal Kit for Two, Patagonia Provisions (yes, that Patagonia) is helping nourish COVID-era campers. These responsibly sourced meals can be prepared within 10 minutes—perfect for the backcountry or your own backyard. All you need is water, a heat source, a pot or two, and a few pantry basics. Selections include organic banana porridge, wild sockeye salmon, and organic red bean chile. For snacking, the box comes with packets of “mellow curry” and “chipotle lime” savory seeds, plus a stash of energy bars.

Why did Patagonia founder Yvon Chouinard—surfer, climber, fly-fisherman, and iconoclast—pivot to food? “To me, Provisions is more than just another business venture. It’s a matter of human survival,” he recently wrote on the company’s website. He describes Provisions as “deeply flavorful, nutritious foods that restore, rather than deplete, our planet … foods that are a key part of the solution instead of the problem.”

Plans are moving ahead for the U.K. capital to loosen lockdown. But the future of transportation in London—where the public transportation system supported some 300 million journeys a month—could look quite different from the past. “As the [COVID-19] crisis passes, the aim is to make temporary schemes to boost cycling permanent, because following close behind this crisis is a larger one: the climate,” says Simon Munk, of the London Cycling Campaign.

Planning has begun on a zone of car-free streets in central London—“one of the largest” of its kind in any capital, according to a statement by the city’s mayor, Sadiq Khan. “It’s really exciting to see the city being transformed,” says Daniel Raven Ellison, a National Geographic Explorer and the driving force behind London National Park City. “What shouldn’t be lost is the potential to claim street space for other things that are important to life in a healthy city—including places for people to play and for wildlife to thrive.”

Italy’s smallest villages could be key to saving the country’s tourism industry. Although international travel to Italy may not return to pre-pandemic levels until 2023, domestic visitors will be looking to alternatives to populous cities when restrictions on cross-region travel are due to be lifted on June 3.

Taking hold of an opportunity, a coalition of village associations last month called for increased infrastructure investment in their many beautiful but declining towns—from rustic Bovino in Puglia to medieval Campli, nestled in a forest in Abruzzo. Last week the Italian government unveiled a 4-billion-euro tourism rescue package that included 30 million euros earmarked to revitalize villages in five southern regions. With these and other initiatives, these gems of the Italian countryside are set to sparkle once international travelers return.

During pandemic lockdowns, urbanites have come to relish living near public parks as much as they did hip cafés. This makes the Trust for Public Land’s just-released annual ParkScore index especially timely, since it ranks 100 American cities according to the convenience and plentitude of their parks and other open spaces. “In the last few months, people have recognized how important it is to get outside and connect to nature,” says Nette Compton, the nonprofit’s associate vice president and director of strategy at The Trust for Public Land..

Topping this year’s list: Minneapolis, with its lakeside greenways and numerous playgrounds, and runner-up Washington, D.C., with its monumental core and vast trail system. For places that rank lower—like 97th-place Oklahoma City, where only 38 percent of residents live within a 10-minute walk from a park—the Trust for Public Land has proactive ideas on increasing access to the outdoors, from creating pedestrian-only streets to making schoolyards accessible to adults and children on weekends and evenings. “People are getting to know their local parks, cemeteries, and other spaces in new ways during this crisis,” says Compton. “Parks have never been more visited or more vital to our health.”

Read all about it

Usually you’d have to make the journey to rural Wales to attend one of the best literary festivals in the world. The Hay Festival is held annually in May, drawing hundreds of visitors to tiny Hay-on-Wye, nicknamed the “town of books” for its dozens of bookstores.

Like many festivals this year around the globe, the U.K. book bonanza is going digital—and consequently opening up an often sold-out event to a broader, more inclusive audience. Free livestream talks run through May 31 (and include authors ranging from Irish novelist Roddy Doyle to Ilhan Omar, the first Somali-American U.S. congresswoman). Recordings of the broadcasts are available to watch any time for an annual subscription fee of 10 pounds (about $12).