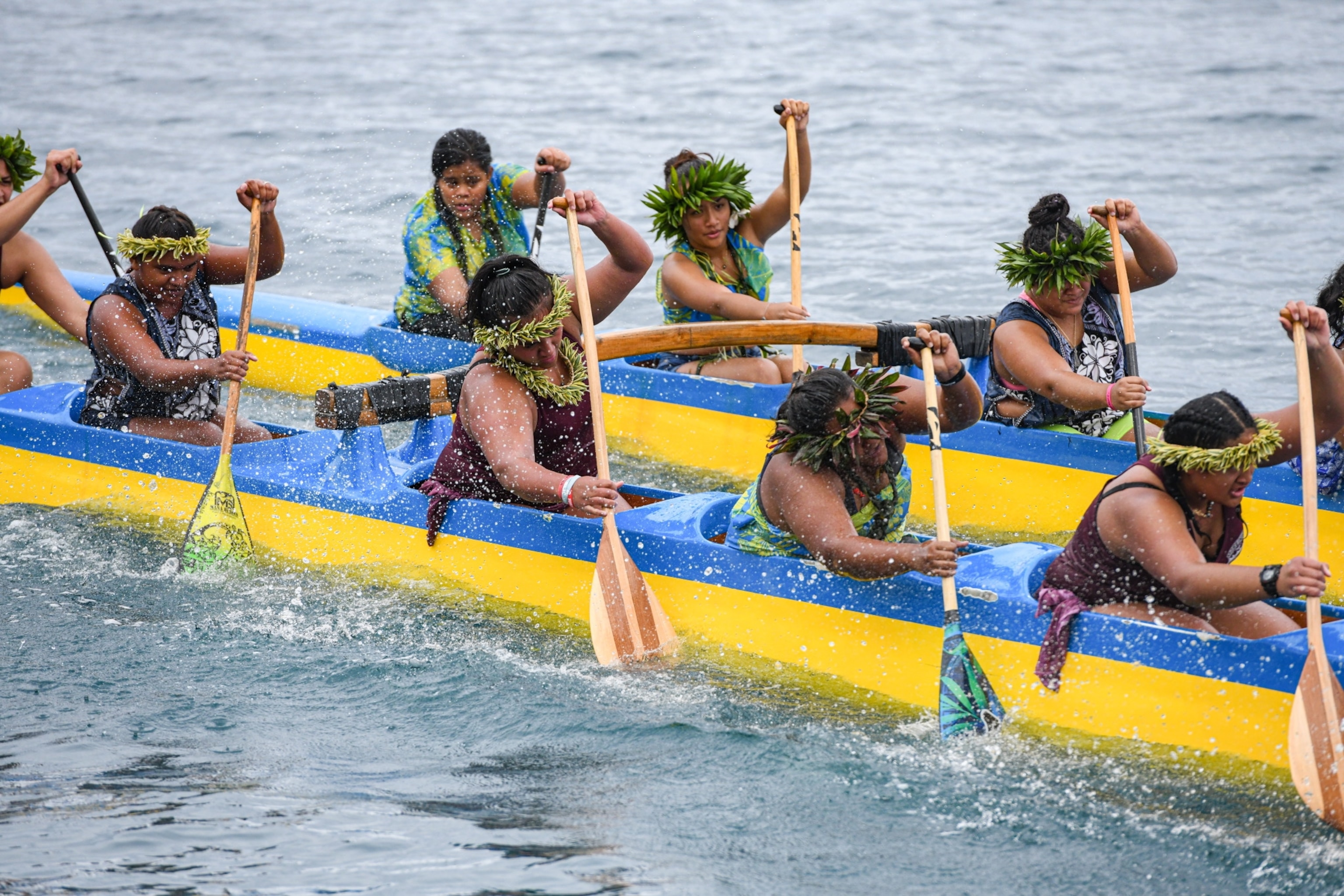 In Tahiti, women are rocking the boat

Women compete in outrigger canoeing, called va’a, as part of the 2019 Heiva cultural festival on Tahiti. Female athletes are vying for equal treatment in the traditional sport, which connects Polynesians with their heritage.
Photograph by Xavier Keutch

“Put your paddle in deeper and feel the water,” says Hinatea Bernadino, as our outrigger canoe glides effortlessly through the glassy Tahitian lagoon. I can clearly see the bottom six feet below me and the parrotfish darting by us. “You and the canoe are one person.”

In an outrigger canoe, called va’a in Tahitian, the ability to be guided by mana—the life force, the energy of ancestors and nature—trumps physical strength, explains Bernadino, whose wins as a professional paddler have earned her legendary status in the Polynesian islands.

“If we feel the mana during the race, it means we are not alone in the canoe. It helps us go faster,” says Bernadino.

On July 24, Bernadino took home her 11th win in the 33rd annual Te Aito competition, held off the shores of Papeete, Tahiti. The Te Aito, which means “warrior” in Tahitian, is considered the most prestigious individual va’a race in the world.

Centuries before Western explorers set sail with compasses and maps, Polynesian “wayfinders” were using ocean swells, stars, and flight patterns of birds to guide them in their canoes. In his book The Wayfinders, anthropologist Wade Davis writes, “What is even more astonishing is that the entire science of wayfinding is based on dead reckoning. You only know where you are by knowing precisely where you have been and how you got to where you are.”

Knowing where you’re from is important to athletes like Bernadino, for whom outrigger canoeing is not just a sport but a cultural practice that connects her with her heritage. Yet, despite being the most decorated va’a female athlete in French Polynesia, she and other women athletes still battle to be treated equitably. As a leader in her sport, she hopes to smooth the path for other women athletes as well as educate visitors about how va’a is a key to understanding the heartbeat of French Polynesia.

‘The canoe is an island’

Most international tourists don’t come to Tahiti to experience va’a. They come to lounge in the overwater bungalows and soak in the 83ºF turquoise lagoons.

But Tahiti and the other 117 islands comprising the five archipelagos of French Polynesia wouldn’t exist as we know them today if it weren’t for the va’a. Genetic research suggests Polynesians migrated from the mainland of Southeast Asia to the South Pacific islands, eventually sailing to Tahiti in the double-hulled va’a about 4,000 years ago. Its name charts a linguistic voyage of its own through the Pacific: An outrigger canoe is called va’a in Tahitian, vaka on the Cook Islands, waka in New Zealand, and wa’a in Hawaii.

Zoom out to see French Polynesia’s location in the Pacific Ocean.

The saying in both Tahitian and Hawaiian goes, “The canoe is an island, and the island is a canoe.” The va’a, like the pito (navel), is sacred to many Polynesians. Both represent life and origin. Even the Tahitian flag depicts a double-hulled va’a.

Traditionally, the hull was made from a hollowed-out koa tree, and the stabilizing arm, called the ama, was attached with coconut fibers woven into ropes. The va’a was used to barter, fish, battle, and celebrate.

To understand Tahitians, says cultural expert and filmmaker Johann Hironui Bouit, one has to know that va’a means the displacement of time and space. Polynesians focus on today with confidence in tomorrow because of their faith in the guidance of their ancestors, he says. The word for “future” in Tahitian, muri, translates to “behind.”

“When you leave an island to voyage, you are looking back at the island as a reference point. We focus on the source where we are from to guide us towards the future,” says Bouit.

Paddling as a family affair

The first recorded organized va’a competitions took place in the 19th century in the lagoons of Hawaii and Tahiti.

When Bernadino races, she says, “I always bring my family with me. I always say a prayer and ask my ancestors to help me.” The 33-year-old attributes her success to her father who has also been her coach since she started paddling at the age of 14. Since then, this fierce competitor has been practically unbeatable.

“It’s in my blood,” she says. The Bernadinos epitomize the va’a family culture. Her father has won multiple world championships and, at 65, still competes. Her uncles on both her parents’ sides are either va’a champions or famous va’a builders.

(Read about the fearless women who take on the ‘Everest of the seas’ sailing contest.)

French Polynesians tend to dominate the sport. “Nowhere else in the world is va’a so supported by the government and the TV stations. Nowhere else do people get paid to do va’a,” says Lara Collins, the New Zealand-based president of the International Va’a Federation.

But only the best French Polynesian male paddlers enjoy this economic opportunity. French Polynesia’s prevailing patriarchal culture means men continue to dominate in the country’s number-one sport. “I’m not a man, so I don’t have a job in my sport. It’s disgusting,” says Bernadino, a seven-time world champion who works as a municipal police mediator.

Her prize money from the Te Aito competition was less than half of the male winner’s. While the women only paddle half the distance the men do—14 kilometers (8.7 miles) compared to 28 kilometers (17.4 miles)—Bernadino says that, given the opportunity, women can cover that same distance just as capably as men. She is currently training for a 25-kilometer race.

Bernadino has made it her mission to forge a path for other French Polynesian female paddlers. She is outspoken on the gender inequities in prize money, TV coverage, and sponsorship. “Even when we paddle the same distance, we don’t get the same prize money,” she says.

She is also working to get the sport approved by the International Olympic Committee, and hopes to become the first-ever female Olympic champion in va’a.

(In Chile, women surfers lead the way in competition and conservation.)

How to experience va’a

In addition to racing, Bernadino gives private lessons, such as the one she gave me during a pre-pandemic visit. When it‘s safe to travel there, tourists can connect with local va’a guides like Bernadino by contacting the Tahitian Va’a Federation, Tahiti Va’a Inc, or Tahiti Tourisme. Local outfitters such as Huahine Lagoon offer lessons and excursions. Green Tours Huahine combines an outrigger canoe experience with a lesson on Polynesian migration history and culture.

Rather spectate? Hawaiki Nui is one of the toughest va’a team races in the world. Teams of six paddlers race a grueling 80 miles (129 kilometers) over three days in a row (without change of crew), linking together the islands of Huahine, Raiatea, Taha’a, and Bora Bora. Heiva is Tahiti’s multiweek cultural festival in early July, during which paddlers (representing their cities, clubs, or neighborhoods) compete in races on all the islands.

Unlike many sports, you don’t outgrow va’a. At 70 years old, Sylvie Auger is still in the game after 40 years of competition. “I hope to last as long as possible,” she says. When she isn’t training on the water, she’s passing down her knowledge to the younger generation.

Leilanie Tuea, 20, for example, started her paddling career at age 16 and now coaches a women’s high school team. “I love the feeling of gliding with the sea,” she says. “As a Tahitian, the ocean is an integral part of who I am. It nourishes me.”

The coronavirus pandemic has disrupted travel. When planning a trip, be sure to research your destination and take safety precautions before, during, and after your journey. Click here for National Geographic reporting on the pandemic.