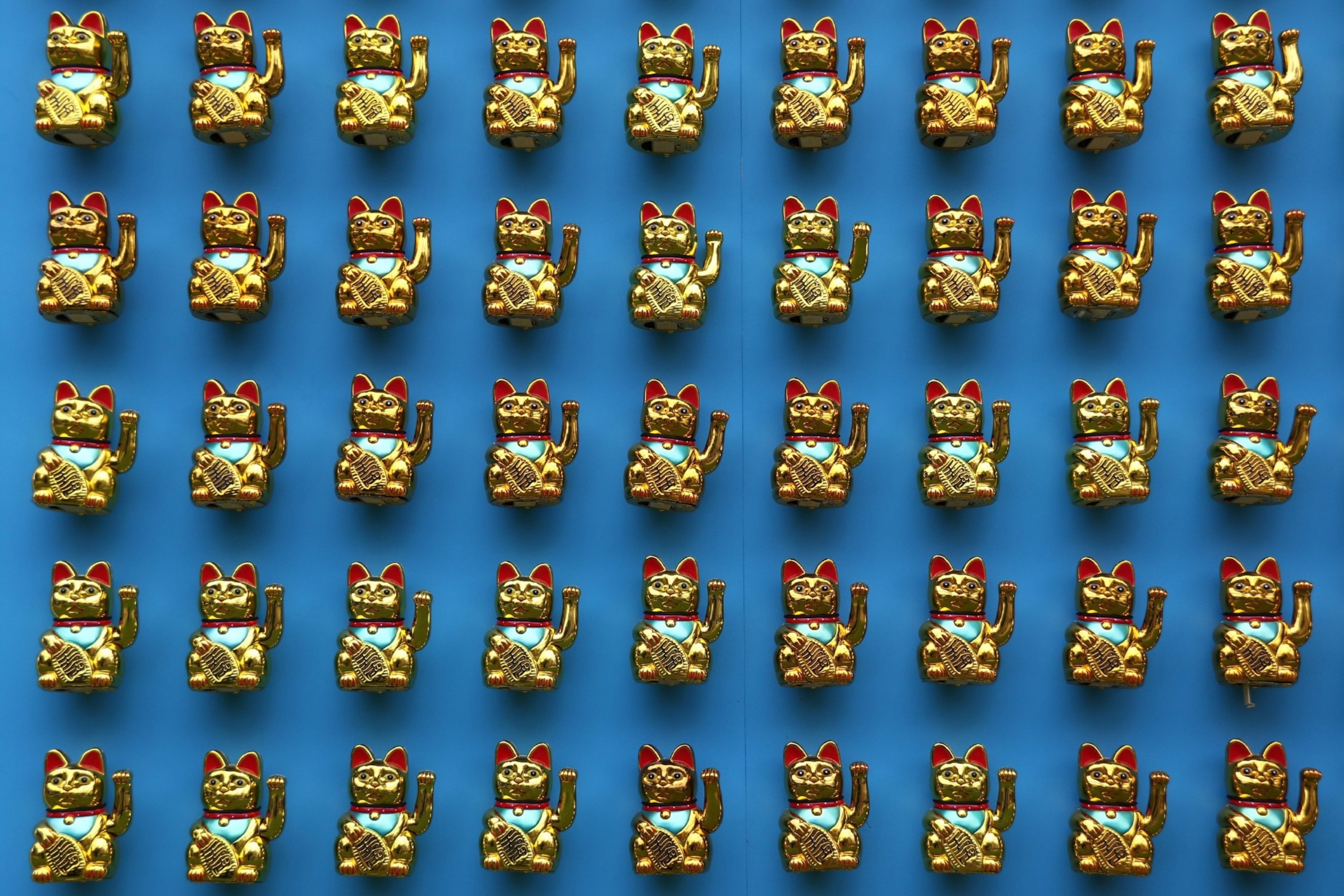 The fascinating history behind the popular ‘waving lucky cat’

With an inviting raised paw and pointy red ears, these iconic lucky charms have been bringing good fortune for centuries.

The maneki-neko, also known as the welcoming cat, lucky cat, money cat, happy cat, and beckoning cat, dates back to the 17th century and has since become one of the most popular features in Asian businesses.
Photograph by Richard Milnes, Alamy

The “Chinese waving cat” is well-known—visually, at least. This kitsch, often gold ornament is ubiquitous in Chinatowns and Asian stores around the world, but these cute little statues aren’t Chinese at all: They’re Japanese.

Named maneki-neko in Japanese (literally “beckoning cat”), the figurine—true to its name and contrary to popular belief—is not actually waving. In Japan, unlike in Western cultures, the way to beckon someone over to you is palm forward, fingers pointing down.

With a raised paw, pointy red ears, and coins and other accessories, maneki-neko have been bringing in luck and prosperity for centuries—and while the iconic statutes have varied origin stories, they all begin in Japan.

One legend starts with a cat born at the Gōtoku-ji temple in Setagaya Ward, Tokyo during the Edo period (1603–1868). According to temple historians, while hunting with falcons, the daimyo (regional ruler) Ii Naotaka was saved from a lightning bolt when the abbot’s pet cat Tama beckoned him into Gōtoku-ji.

Grateful to the cat for saving his life, the ruler made it a patron of the temple where it has been venerated in its very own shrine ever since.

Today the tranquil grounds of Gōtoku-ji are dotted with thousands of beckoning cat statues of varying sizes. Visitors come to see the array of white cats—commonly shaped as a Japanese bobtail, a breed that makes frequent appearances in local folklore—and pray for luck. The statues can be purchased at the temple and are usually left behind as an offering, although many take them home as a souvenir.

(Here’s a look at lucky charms around the world.)

Near Asakusa, Tokyo, lore speaks of Imado Shrine’s maru-shime no neko (roughly “good fortune cat”), a variation of the beckoning feline that sits sideways with its head facing forward. In 1852, an old woman living in Imado was so poor she could no longer feed her pet cat and was forced to let it go. That night the cat appeared to the lady in a dream and said, “If you make dolls in my image, I will bring you good fortune.”

Following the feline’s instructions, the old woman made figurines from Imado-yaki ware and went to the shrine to sell them at the gates. The cat kept his promise, and the ceramic figurines quickly became very popular, saving the old woman from poverty. In the same year, pre-eminent printmaker Hiroshige Utagawa illustrated the cats being sold at a market in his acclaimed woodblock print (the oldest known image of the fortune cat).

Whatever the precise location of the statue’s origin, one thing is for sure: The cats bring in good fortune. The reason for their prevalence seems to be linked to their real-life analogs. In 1602, an imperial decree set free all cats in Japan, intending to capitalize on the felines’ natural ability for pest control, especially in the sericulture community. After the decline of the silk trade, cats by extension remained as talismans for a business’s prosperity.

It’s more than simple pest control though—it’s taking care of the cat that reaps the rewards. “The importance of maneki-neko lies in its mythologized power to bring good fortune to the caretaker,” says Yoshiko Okuyama, professor of Japanese at the University of Hawaii at Hilo.

“A Japanese proverb, neko wo koroseba nanadai tataru (If you kill a cat, it will haunt your family for seven generations) is based on a folk belief that cats are revengeful and have longevity beyond human lives,” Okuyama continues. There is a deep-rooted belief in the power of cats: Look after them, and they’ll look after you.

“This image is used as an amulet designed to attract business and promote prosperity. It is to be found at the entrance of restaurants and shops, where, with its ingratiating feline qualities and uplifted paw, it may invite customers and bid them enter,” Ball continues.

Nearly a century later, there’s now a rainbow of figurines for different types of luck. If you’re worried about traffic safety, opt for a blue statue to keep you safe; pink is for those looking for luck in love; the famous golden iteration attracts prosperity.

The meaning also changes depending on which paw is raised: the right paw attracts money and good fortune; the left invites friendship and customers. Other additions include a ryō (an oval-shaped Japanese coin) to represent wealth, as well as historically true-to-life accessories, such as a bib or bell, that point to how pet cats were regarded and cared for in Japanese society.

“[These figurines] are not just protective amulets,” says Okuyama. “They are intermediaries or envoys that connect our lives with the realm of deities and have the power to convey our ‘S.O.S’ to the spiritual world at a time of despair and distress.”

It remains unclear how these iconic statues spread outside the islands of Japan to become so well-known throughout Asia and the rest of the world.

According to an undergraduate research project led by Bill Maurer, professor of anthropology at the University of California, Irvine, the figurines date back to the Meiji Period (1868–1912). In an attempt to appear more polished to conservative Westerners, the Meiji government enacted the Public Morals Ordinance in 1872. The law banned phallic charms that were often on display in places of prostitution. Maneki-neko were used as replacement ornaments, and the adoption of the maneki-neko as an amulet for prosperity soon spread to other Asian countries and communities.

The boom in Japanese pop culture during the “Cool Japan” era of the 1980s and 90s—coinciding with the second wave of Chinese immigration to the U.S.—further embedded the maneki-neko into mainstream culture.

(Learn how Tokyo became a megacity by reinventing itself.)

The icons soon found themselves manifesting as multimedia characters in art, fashion, and even video games. “This cat mythology has been extended to today’s popular culture,” says Okuyama, citing Hayao Miyazaki’s anime, The Cat Returns, in which the main character is rewarded for saving a cat. Another example is Meowth, the Pokémon lookalike with a coin on its head, and whose special move in English is “pay day” wherein the player can collect extra cash after a battle.

Where to find them

In shops and businesses across Japan, maneki-neko in their original form can still be seen beckoning customers. From a more historic perspective, the Manekineko Museum of Art in Okayama showcases a collection of more than 700 lucky cat statues from across the ages. The cats are also celebrated annually in September when the Manekineko Festival is held in various cities across the country.

There’s even a Manekineko-dori Street (“Beckoning Cat Street”) in Tokoname City, Aichi Prefecture, where dozens of ceramic cat statues decorate the street. And in Tokyo, you can head straight to the source at cat-filled Gōtoku-ji, or visit the Imado Shrine, which also sells its own take on the maneki-neko.

In the U.S., those down on their luck can venture to Ohio’s Lucky Cat Museum in Cincinnati, which features over 2,000 iterations of the feline icon.

But perhaps the best place to see a maneki-neko is in its natural habitat: Sitting on a cash register, waving you in from the entrance of a restaurant.

Rebecca Saunders is a travel and food writer based in Japan.