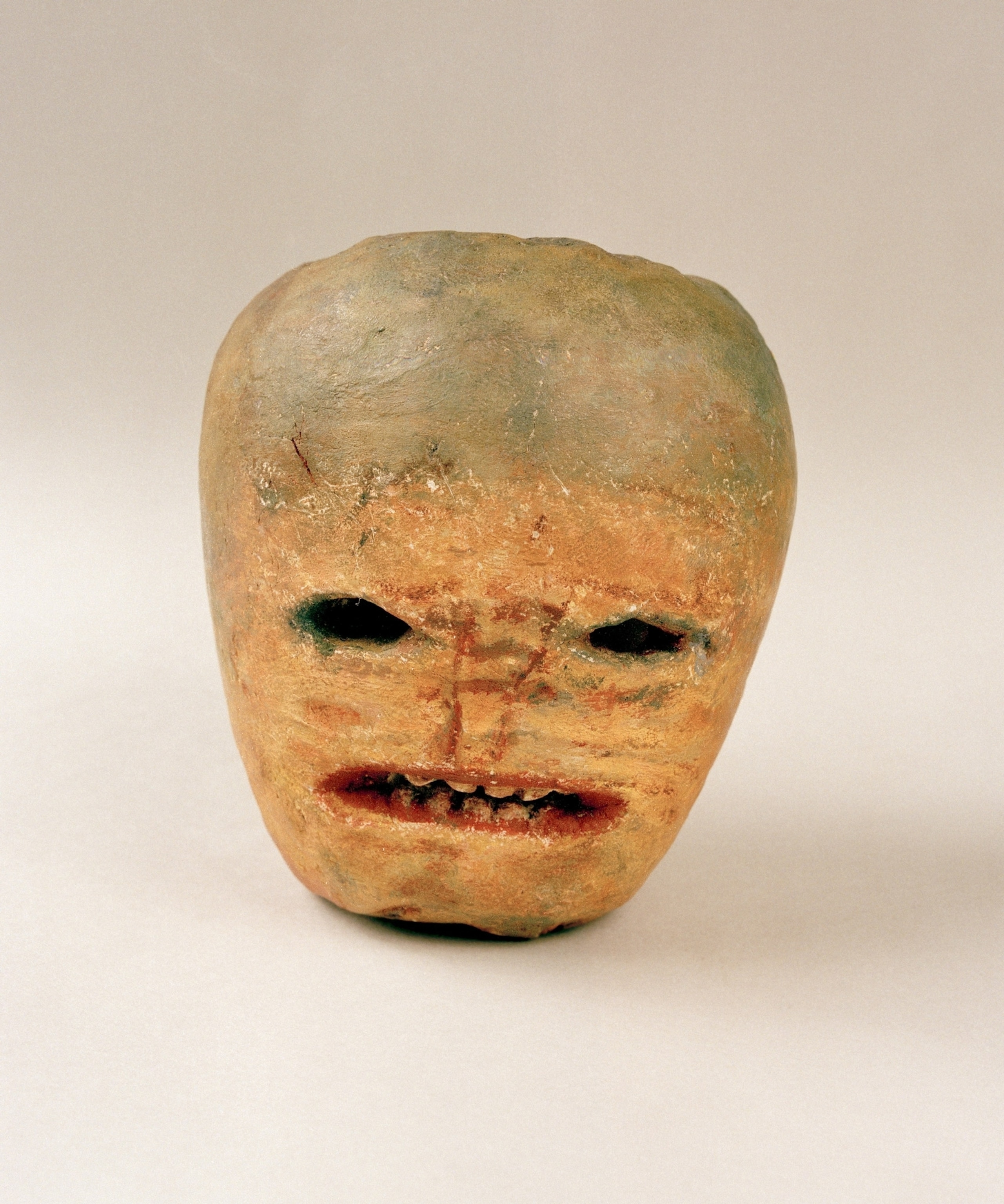 Celtic rituals, tricks of nature, and deals with the devil have all played a part in creating this iconic symbol of Halloween.

The National Museum of Ireland—Country Life, near the town of Castlebar, displays a plaster cast of an early 1900s jack-o’-lantern, known as a “ghost turnip.”

Photograph by National Museum of Ireland

There’s no more classic Halloween image than a glowing jack-o’-lantern perched in a window or on a porch, setting a merrily macabre mood. For decades, carving a pumpkin has been a beloved fall tradition in America, celebrated with parties, festivals, and televised competitions.

The backstory of jack-o’-lanterns, including how they came to star in Halloween decor and why they’re carved in the first place, is a tale worth telling. Although the legendary Headless Horseman and his hurled pumpkin have been scaring Americans for generations, jack-o’-lanterns actually trace their origins back centuries to Old World traditions in countries including Ireland, England, and Scotland.

Along the way, pagan rituals, freaky folktales, and natural phenomena have interwoven to create a fascinating history that’s part fact, part fiction, and all frightfully fun.

The concept of using a round fruit or vegetable to depict a human face goes back thousands of years in some northern European Celtic cultures. “It may even have had pre-Christian origins that evolved from the custom of head veneration, or potentially even represented war trophies taken from your foes,” says Nathan Mannion, senior curator for EPIC The Irish Emigration Museum, in Dublin. “It’s quite macabre, but it may have symbolized the severed heads of your enemies.”

The idea took deeper hold during the Celtic festival of Samhain, which was originally celebrated on November 1 and inspired many traditions of modern-day Halloween. On Samhain eve, October 31, spirits of the dead were thought to mingle with the living. To ward off restless souls, people donned costumes and carved frightening faces into root vegetables such as beets, potatoes, and turnips—usually plentiful after the recent harvest.

(Related: These paper crafts bring the party on Day of the Dead.)

A practical purpose also evolved, says Mannion. “Metal lanterns were quite expensive, so people would hollow out root vegetables,” he says. “Over time people started to carve faces and designs to allow light to shine through the holes without extinguishing the ember.”

Visitors to the National Museum of Ireland—Country Life, in County Mayo, can see firsthand how terrifying those turnips could look. A plaster cast of a carved turnip lantern common during the early 1900s—called a “ghost turnip” and complete with craggy teeth and sinister eye slits—haunts the museum’s permanent exhibitions.

The origins of jack-o’-lanterns aren’t limited to produce; the term also referred to people. According to Merriam-Webster, in 17th-century Britain it was common to call a man whose name you didn’t know “Jack.” A night watchman, for example, became known as “Jack-of-the-Lantern,” or jack-o’-lantern.

Then there’s the 18th-century Irish folktale of Stingy Jack, an unsavory fellow often said to be a blacksmith who had a fondness for mischief and booze. Dozens of versions abound, but one recurring storyline is that Stingy Jack tricked the devil twice. When Jack died, he found himself barred from heaven—and from hell. But the devil took some pity on Jack, giving him an ember of coal to light his turnip lantern as he wandered between both places for eternity—again inspiring the nickname Jack-of-the-Lantern, or jack-o’-lantern.

“It was also used as a cautionary tale, a morality tale, that Jack was a soul trapped between two worlds, and if you behaved like he did you could end up like that, too,” Mannion says.

The story also helped explain ignis fatuus, a natural phenomenon that occurs in marshlands and bogs—such as those in Ireland’s countryside—producing flickering lights as gases from decomposing organic matter combust. Also known as fool’s fire, fairy lights, will-o’-the-wisp, and eventually, jack-o’-lantern, it often seemed like “a floating flame that would move away from travelers,” Mannion says. “If you were to try to follow the light, you could go into a sinkhole or bog, or drown. People thought it was Jack of the Lantern, a lost soul, or a ghost.”

As Ireland began the process of nationwide electrification in the 1930s, the tale of Stingy Jack started to fade. “The minute the lights came on, a lot of the stories lost their potency, and people’s imaginations weren’t running as wild,” Mannion says.

Over the years, jack-o’-lanterns have become popular in many countries. Here carvers in Zurich, Switzerland, in 1979 take their knives to turnips.

Near the village of Sleepy Hollow, New York, the annual Great Jack O’ Lantern Blaze illuminates the grounds of the historic Van Cortlandt Manor with more than 7,000 hand-carved pumpkins.

But by then, the tradition of jack-o’-lanterns had already taken root in the New World, showing up in early American literature and media. Writer Nathaniel Hawthorne referenced one in his 1835 short story “The Great Carbuncle,” and again in 1852 with “Feathertop,” about a scarecrow with a carved pumpkin head. According to Cindy Ott, author of Pumpkin: The Curious History of an American Icon, the first image of a pumpkin jack-o’-lantern is likely one that appeared in an 1867 issue of Harper’s Weekly.

Washington Irving’s “The Legend of Sleepy Hollow,” first published in 1820 and republished in 1858, propelled the pumpkin into American culture like never before. In the short story’s climax, the Headless Horseman chucks an uncarved pumpkin at Ichabod Crane, who is never seen again. But most images of the terrifying villain portray him holding a fiery jack-o’-lantern, which helped the story become a perennial Halloween favorite.

“The legend is considered a Halloween story, probably because it was one of the first internationally well-known horror stories,” says Sara Mascia, executive director of The Historical Society of Sleepy Hollow and Tarrytown. “The pumpkin became associated with that element of fear, and that’s why the jack-o’-lantern comes out, because it’s with the galloping Hessian [soldier], the Headless Horseman, whatever you want to call him.”

In the 19th and early 20th centuries, the influx of Irish immigrants, who brought their traditions and folktales, also helped shape the story of jack-o’-lanterns in America. They discovered that pumpkins, not indigenous to Ireland but common in North America, were much better suited to carving than turnips or potatoes.

As more Americans began to celebrate Halloween, the jack-o’-lantern emerged as its most iconic image. A review in the Atlanta Constitution described the 1892 “All Halloween” party at the home of Atlanta mayor William Hemphill in glowing terms: “Never in the annals of Atlanta society has a more unique and brilliant entertainment been given,” with decor showcasing “all sorts of smiling lanterns made of pumpkins, cleverly carved with faces.”

The carved gourds have come to serve as much more than mere decoration. Despite their often fearsome look, jack-o’-lanterns now symbolize a welcoming sense of community. “At Halloween, you don’t go up to someone’s house unless they have a jack-o’-lantern,” Ott says. “It’s about cementing a community, projecting good values, neighborliness. The pumpkin and jack-o’-lantern take on those meanings, too.”

Over the past decade, the jack-o’-lantern’s popularity hasn’t dimmed. According to the U.S. Department of Agriculture, more than 1 billion tons of pumpkins were harvested in 2018. Many end up as jack-o’-lanterns on porches—although a few make television appearances on shows like HGTV’s Pumpkin Wars or Food Network’s Outrageous Pumpkins.

Pumpkins during a pandemic

This year the coronavirus is putting a damper on Halloween celebrations, but some pumpkin patches and festivals are proceeding with caution. Normally Sleepy Hollow, New York, and neighboring Tarrytown host dozens of events honoring the namesake legend. In 2020, which marks the bicentennial of the story’s original publishing, the schedule is drastically scaled back. But the Great Jack O’ Lantern Blaze, illuminated by more than 7,000 hand-carved pumpkins, is open with reduced capacity, advance ticket purchases, and social distancing.

In Gretna, Nebraska, Vala’s Pumpkin Patch offers 55 acres of pumpkins, several attractions, and this year an online “Live Crowd Tracker” to let guests know when it’s reaching capacity. At the Dallas Arboretum and Botanical Garden’s popular Autumn at the Arboretum event, masks and advance registration are required to explore the artful scenes featuring more than 90,000 pumpkins and gourds.

Meanwhile, organizers of the Keene Pumpkin Festival in New Hampshire, which set a Guinness world record for the most jack-o’-lanterns, have shifted to a “self-managed” format, encouraging residents to place their carved creations in front of their homes and businesses. In Atlanta, one small business owner is bringing the pumpkin patch to the people, with a “Pumpkin Truck” delivery service that hauls the seasonal staples to customers’ neighborhoods.

To avoid catching or spreading the virus, the Centers for Disease Control and Prevention recommends that revelers in areas where COVID-19 is active refrain from traveling to rural festivals.

Luckily, you can still get into the Halloween spirit the time-honored way: by carving a jack-o’-lantern at home—just like humans have done for centuries, bringing some light to a dark fall night.

Blane Bachelor is a Florida-born, Berlin-based writer who covers travel and outdoor adventure for the Washington Post, New York Times, and Outside, among others. She’s also a Halloween superfan. Follow her on Instagram.