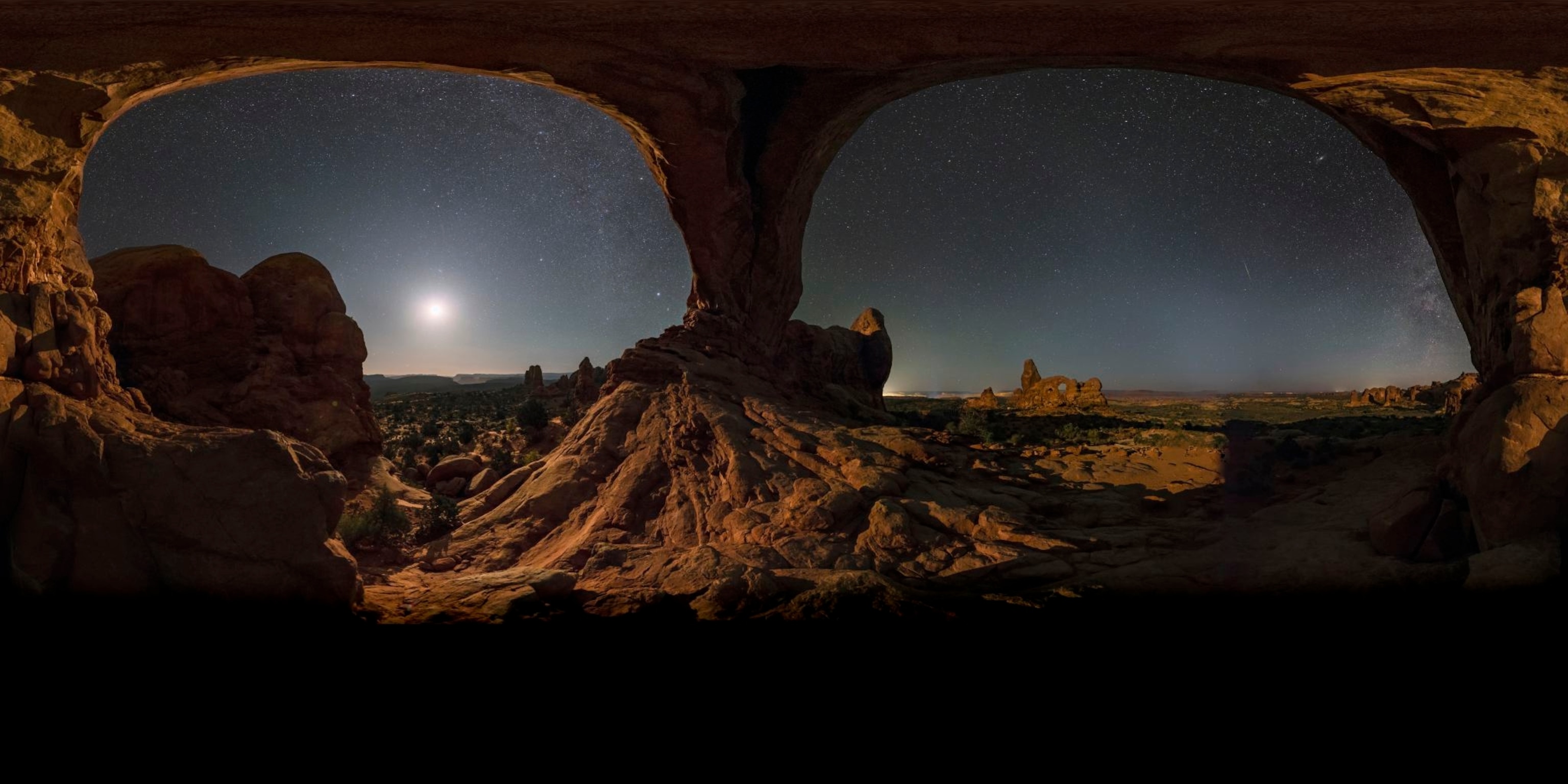 These national parks are home to some of the most incredible U.S. landmarks

From the largest canyon in the world to the tallest living tree, here are 12 American parks with amazing wonders.

Arches National Park has the greatest concentration of natural formations in the United States. It’s just one of many exceptional sites administered by the National Park Service.
Photograph by Babak Tafreshi, Nat Geo Image Library

This month, the National Park Service turns 105. While that number is impressive, many other figures relating to the 423 units—including 63 national parks—the Park Service administers are more astonishing.

National Park units vary in size, from a small house in Pennsylvania (Thaddeus Kosciuszko National Memorial) to a park in Alaska that’s larger than Switzerland (Wrangell–St. Elias National Park and Preserve.) The system encompasses over 85 million acres; includes 85,000 miles of rivers and streams; 7,035 square miles of reservoirs, lakes, or ocean; more than 43,000 miles of shoreline; 21,000 buildings; 27,000 historic structures; over 18,000 miles of trails; and nearly 9,000 miles of roads.

These federal properties—from battlefields to national seashores—are chosen for the protection of their natural, historic, and cultural values and are specially designated by an act of Congress (or in some cases, an executive order), and maintained for public use. In 2020, visitors logged 1,054,952,540 recreation visitor hours.

Today the National Park Service performs environmental advocacy in a time of climate change; acts as a guardian of diverse recreational, cultural, and historical resources; and serves as an ambassador to park preservation around the world—inspiring other countries to follow suit. Since 1916, the mission—to preserve these treasured sites for the education, enjoyment, and inspiration of this and future generations—has not changed.

As a result, visitors reap the rewards. As the Milky Way burns across the dark skies of Death Valley and the northern lights finish shimmering above Denali, the first sunbeams hit the continent at Acadia. Bats wing their way back into Mammoth Cave, the bison herds stir at Yellowstone, and the Colima warbler trills its first song at Big Bend. Priceless national treasures, parks were created for these creatures, the land and its waters, and a rekindling of the human spirit.

You can learn more about these sanctuaries in the National Geographic Atlas of the National Parks, which takes readers on an epic journey through the extraordinary and unique features that distinguish these wilderness areas.

This world of wonders includes countless superlatives, from the world’s largest gypsum dune field to the highest peak in North America. Here are a few of our favorite wild places. Click through for travel reference pages that will help you plan your next epic excursion to a national treasure.

Zoom out to see more of the extreme national parks mentioned in the article.

Only national park south of the equator

The United States’ 60th national park doesn’t resemble other parks. In the half-century since its construction began, Missouri’s Gateway Arch National Park has been many things: a monument to Thomas Jefferson’s historic frontier, a commemoration of Lewis and Clark’s epic expedition—and, most recently, a national park. After a $380 million renovation, the miniature park features a waterfront green space laced with walking trails, an amphitheater, and a top-tier American history museum.

Tucked up on the northwest corner of Wyoming with parts spilling over into Montana and Idaho, Yellowstone National Park—established March 1, 1872—is still one of the most imposing, a blend of land and water, forest and field, wildlife and geothermal features that often seem to be living things. Rather than a single focus, Yellowstone has five main hubs—Old Faithful, Grant Village, Lake Village, Canyon Village, and Mammoth Hot Springs—each of them linked to a unique geological or geographical phenomenon.

As the world's first national park, Yellowstone has astonished visitors for over a century. Have the rare chance to see grizzly bears, bison, and a thriving population of grey wolves in their natural habitat. Located primarily in the state of Wyoming, Yellowstone National Park sits atop an enormous, slumbering supervolcano and is home to half of the world's geysers. From a 300-foot-tall waterfall to giant hot springs, here are five must-see attractions in Yellowstone.

Designated a UNESCO World Heritage site in 1981, Mammoth Cave National Park consists of more than 400 miles of caves, with new caverns discovered all the time. Black guides were instrumental in the early mapping of the cave—first working as enslaved people, later alongside whites as paid guides. The ancestors of the seven tribes associated with the historic use of the parklands—including the Cherokee Nation and Shawnee Tribe—once used the cave system to mine minerals like gypsum with mussel shell scrapers harvested from the Green River.

(This U.S. national park has the world’s longest cave system—and an unusual history.)

Before it became a national park in 1992, Dry Tortugas National Park was an area steeped in legends of swashbuckling pirates, turbulent waters, and stolen treasure. Now the seven-island archipelago, located in the Gulf of Mexico, 70 miles off the coast of Florida, is known for sheltering the third-largest coral barrier reef in the world (99.8 percent of the park is underwater) and the only tropical reef in the continental U.S.

Greatest density of natural arches in the world

Perched high above the Colorado River, Arches National Park is part of southern Utah’s extended canyon country, carved and shaped by weathering and erosion. There are more than 2,000 arches in the park; the largest is Landscape Arch, which spans 306 feet (longer than a football field) base to base. New arches are constantly forming, while old ones occasionally collapse—most recently Wall Arch, which fell in 2008.

The largest national park south of Alaska, Death Valley National Park is known for extremes: It is North America’s driest and hottest spot (with fewer than two inches/five centimeters of rainfall annually and a record high of 134°F), and has the lowest elevation on the continent—282 feet below sea level. Even with these harsh conditions, the park still receives nearly a million visitors each year.

Largest canyon in the world

Large enough to fit 19 Statues of Liberty stacked on top of each other, the Grand Canyon National Park is a sprawling gorge of layers in pink, red, and orange hues, revealing millions of years of geological history. Given the absence of roads, there are only three ways to explore below the rims: hiking, mule trips, river rafting trips.

New Mexico’s White Sands National Park hit the big leagues in December 2019, becoming the country’s 62nd national park. It protects the largest gypsum dune on Earth, a remnant of bygone lakes and seas, a 275-square-mile basin that glitters white and stays cool to the touch. Visitors come to cruise the eight-mile Dunes Drive, hike one of the five established trails, or see the soft, translucent sand glow blue-white under a full moon.

Larger than the state of New Jersey, Denali National Park and Preserve is a vast wilderness that is mostly untouched by human hands, save for the one park road and a few scattered services. It is known for extraordinary wildlife and big adventures, from backcountry camping to mountaineering. And on a good day, the park’s famous—and often notorious—clouds will part to reveal the great massif of Denali itself, the tallest peak in North America at 20,310 feet high.