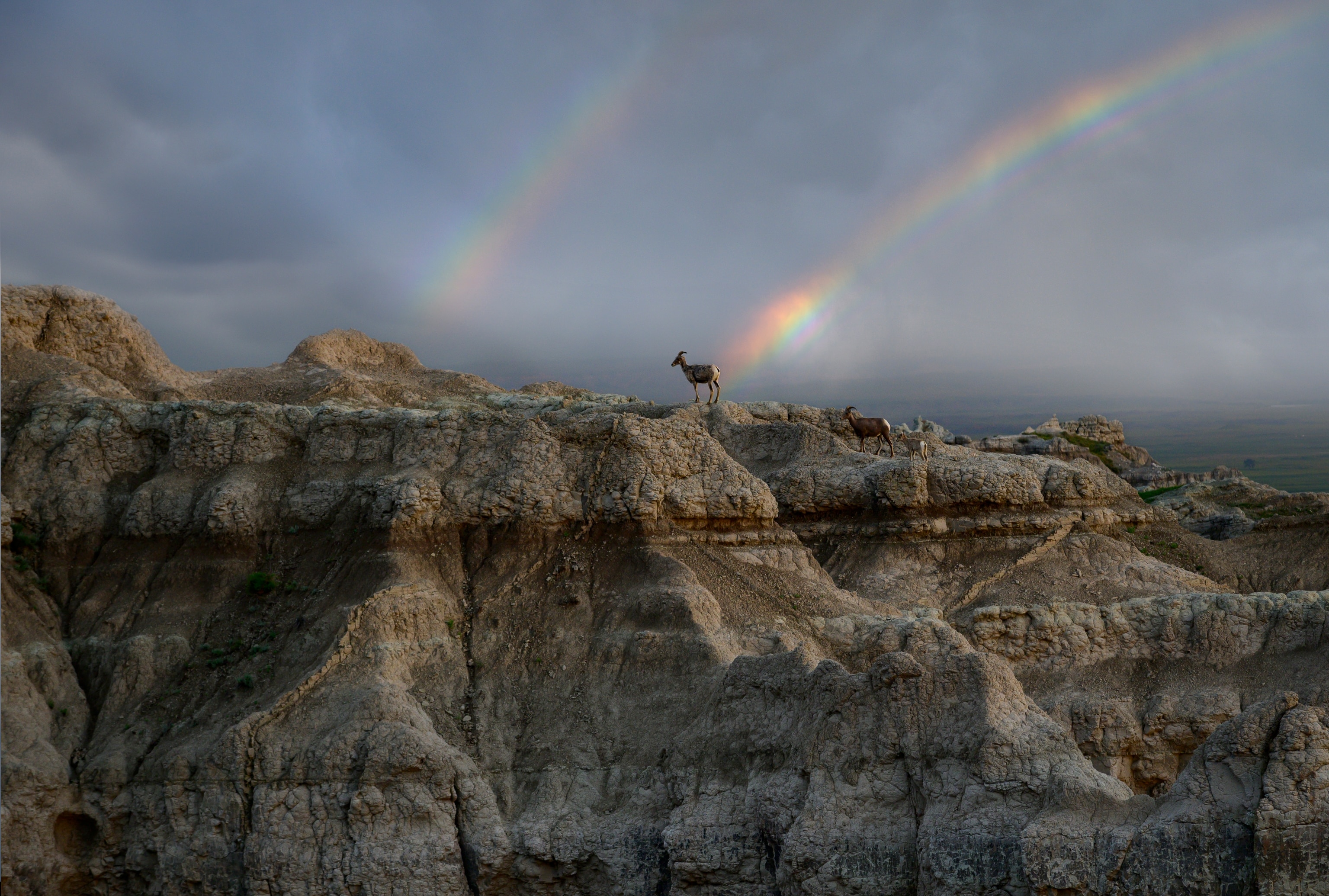 The Oglala Lakota people want you to know about their centuries-old connection to this land in South Dakota.

A Bighorn sheep navigates a treacherous rock formation in Badlands National Park. The park is home to exceptional views, wildlife, fossils, and the rich history of the Oglala Lakota people.
Photograph by Christian Heeb, Laif/Redux

For Jesse Short Bull, the Badlands of western South Dakota are “like a book.”

“Because of the erosion that’s taking place, and the randomness of the erosion, you get cross sections of land. In the Badlands, you can literally see geological time,” he says.

As an Oglala Lakota who grew up here and can trace his lineage five generations back to the first Short Bull, the region’s expansive prairies, its skyline of red-striped buttes and mesas, its burning heat and thundering showers flow through his veins like the floods that shaped the Badlands’ rock formations.

There is tremendous pride in the Native community about their ancestors’ resilience in traveling across this inhospitable landscape and building a community that now counts an estimated 47,000 members.

Established in 1978, Badlands National Park covers 379 square miles. It contains the largest expanse of protected prairie in the National Park System, with boundaries curling into the massive Pine Ridge Reservation, where a majority of Oglala Lakota people reside today.

In many ways, the region and the Native people are inextricably linked. And yet there is a wide chasm between how Natives and visitors perceive and experience the landscapes around them.

(In rural Oklahoma, an Osage photographer creates portraits of resilience.)

“I’m not satisfied that people that come to the Badlands are getting a full scope of that interconnectedness that [Native] people had with this place,” says Short Bull, a filmmaker who is working on a documentary about the efforts of South Dakota Native Americans to reclaim control of land in the Black Hills.

For him, signifiers of the ancient past are abundant everywhere—he recalls stumbling upon countless arrowheads, and once even an ancient stone hearth lined with stones and charcoal—yet most visitors “don’t get a whole lot of [Oglala Lakota] history tied directly to the Badlands.”

His hope is that future visitors will have the chance to explore the Badlands in a way that more comprehensively surfaces and integrates Lakota culture.

Ancient creatures of the Badlands

Taken from the Oglala Lakota name Mako Sica, “land bad,” the region’s name references the spires that still frustrate travelers trying to traverse over and around dangerously steep terrain that shifts underfoot.

Along with its bison, prairie dogs, and otherworldly vistas, the Badlands offer one of the world’s richest concentrations of prehistoric fossils, containing the remains of marine organisms, large mammals, and innumerable reptiles.

(See Oklahoma through a Native lens at this new museum.)

Each year, up to 16 inches of rain rakes the landscape, often in fierce, midsummer thunderstorms that wash another inch or two of sediment away. Gullies are cut deeper, pinnacles crash to the ground, and more fossils poke out of the sediment like ancient sea creatures surfacing for air.

Native peoples also noted the remnants of prehistoric creatures in stone. Centuries before paleontologists discovered the multitude of fossils there, the Lakota people referred to these creatures as Unk-tegila, or “water monsters.” They even play a role in the Oglala Lakota creation story.

Multiple nineteenth-century paleontologists repeatedly came and removed fossils, as well as bison and wolf carcasses, from the area to display in distant museums.

During the 1800s, an estimated 10,000 hunters also poured onto the plains to collect bounties on valuable bison hides — to a point where 5,000 were being killed a day.

Bison, found in North America and Europe, are often incorrectly called "buffalo," which are found in Asia and Africa. Historians believe the misnomer comes from European settlers as a riff on the French word for beef, “boeuf.”

These animals symbolized the Oglala Lakota’s survival as they were the peoples’ primary source of sustenance. Once at 60 million strong, the bison were reduced to an estimated 325 animals remaining across the continent by 1884.

Shifting terrain is also an apt metaphor for the social history of this expanse. The park’s oldest archeological site is 12,000 years old and was likely a camp for traveling hunters. Not much is known about the “Plains Archaic” peoples who came to the Badlands before the Arikara and Oglala Lakota communities, which still exist today. To date, no evidence has been found suggesting these peoples permanently lived anywhere in the Badlands.

(A totem pole traveled across America as part of an effort to protect sacred sites.)

The Oglala Lakota people, however, have lived in the region for hundreds of years but first encountered Europeans who were passing through to collect furs in the early 1800s.

A treaty in 1868 had assigned the tribe to live on one of many reservations—such as the Pine Ridge Agency (later renamed Reservation); a half dozen years later the discovery of gold in the region intensified conflict over the land.

Then a flood of homesteaders illegally staked their claims in violation of the 1868 treaty. Angry at the seizure of their lands, the tribe migrated north to Canada during the summers in hopes of finding more bison— which had been hunted out from the Dakotas. In winter, they returned to squalid camps on reservation land, where they were met with meager food and blanket handouts from the U.S. government.

In despair and desperation—and often hungry—the people became followers of the Ghost Dance religion. Like many Plains Indians, the Oglala Lakota hoped their peaceful marathon dance sessions would restore the lands and its bounty. In early December 1890, nearly a thousand members of the tribe walked through prairie dog colonies and rattlesnake terrain, then climbed a mesa and crossed a knife-edge ridge. On the grassy, windswept promontory protected by cliffs, they called their sacred place Oonakizin or “Stronghold.”

There, they wore Ghost Shirts—carefully stitched with deer hide, wool, porcupine quills, and human hair and dyed red and yellow like the local sedimentary striping—that were purported to repel rifle bullets. So clad, they performed their Ghost Dance, chanting and swaying all night until they dropped from exhaustion.

Although the band of December 1890 safely returned to the reservation, it was the last Lakota Ghost Dance. At the end of that month, a military detachment of 500 heavily armed men intercepted 350 thinly clad and hungry Lakota who were 30 miles south of Oonakizin at a creek called Wounded Knee, on their way to food and safety at the reservation. After an argument between an officer and a deaf Native man who didn’t understand a command to put down his valuable rifle, the soldiers opened fire with huge Thompson guns.

Approximately 200 Lakota were massacred, many of them unarmed and many killed while running away. Half were women and children.

Badlands was established as a national monument in 1939, but within three years, the U.S. government needed a military bomb-testing range and appropriated 534 square miles from the Indian reservation and a small piece of the monument.

Despite repeated attempts to clean up and remove decades worth of small bullets, chemical munitions, antitank rockets, magnesium-filled explosives, and several hundred-pound bombs—park visitors and reservation residents alike still discover unexploded munitions poking out of the Badlands like insidious, toothed fossils. These discoveries serve as reminders of the troubled history of Badlands National Park.

Bison were reintroduced to Badlands in 1963, beginning with 50 bison from North Dakota’s Theodore Roosevelt National Park. In the 1980s, 20 additional bison were brought in from Colorado National Monument. As of 2018, more than a thousand bison—a threshold of stable genetic integrity—thrive in the Badlands.

Short Bull remembers watching his dad pray at the Cedar Pass section of the park. He says it’s a rare spot where trees grow, thanks to a large chunk of the Badlands Wall that broke off and prevented water from draining out into the ground.

“It was an intimate thing,” he says. “[My dad] would make what we call prayer ties, a kind of offering. Then he would slip away into the Badlands and be gone for a while. When things were weighing heavy on his mind… he would go touch base with the creator out there.”

Short Bull carries on his father’s practice when he seeks solace, too. He adds that he sees the park as a grandfather, with the wisdom and wrinkles of an elder.

“This is a unique resource that we need to protect,” Oglala president Kevin Killer says. “That’s one of the things we're known for, being able to protect our community, protect our district resources. And I think that’s something that was kind of instilled down into us—as always protect your mother, protect your homeland.”

The South Unit of Badlands National Park is made up of largely remote and undeveloped land within the reservation featuring spectacular scenery. This wild area is perfect for experienced hikers and adventure-seekers. Due to limited access to filtered water and the danger of undiscovered old explosives, Badlands National Park Ranger Christian Knutson urges visitors to check in at the White River visitor’s center before they venture out.

For a deeper dive into Oglala Lakota life and culture, visit the Historical Center at Oglala Lakota College, the Oglala Living History Village at the Pine Ridge Chamber of Commerce, and Heritage Center at Red Cloud School.

Angie’s Burritos in Kyle is great for “Indian tacos,” a local treat served on fry bread instead of tortillas. Vendors including jewelry sellers gather at Wounded Knee in the summer; in the town of Interior, Native West Trading Co. offers Native art and beadwork.

Be sure to call in or stop by the Pine Ridge Chamber of Commerce for more information on shopping, stays, restaurants, and more.

This article was adapted from National Geographic Atlas of the National Parks, which takes readers on an epic journey through the extraordinary and unique features that distinguish these wilderness areas.