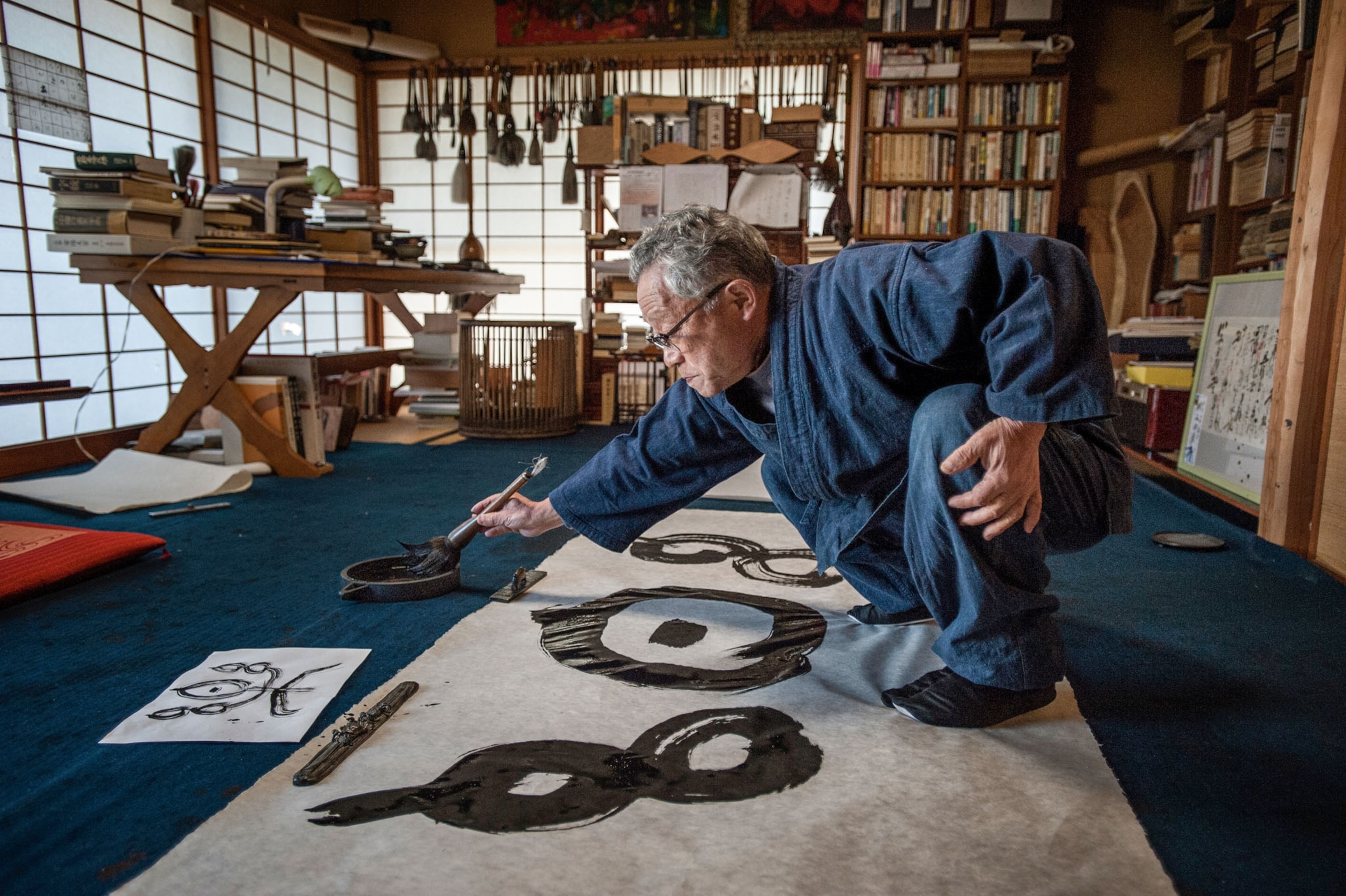 Eco-friendly and adaptable, washi made the traditional way still thrives in towns steeped in history.

Master calligrapher Tadashi Kawamata writes on washi, traditional paper that is still handmade in some parts of Japan.
Photograph by JAMES WHITLOW DELANO

Every summer, giant warriors roam the Japanese city of Aomori. Lit from within by lanterns, these formidable paper floats are the centerpiece of the Nebuta Matsuri, a weeklong evening festival in August and one of Japan’s biggest seasonal events.

Accompanied by taiko drummers and dancers, the floats depict scenes from kabuki and Japanese mythology. Each takes months to design and make, says float maker Hiroo Takenami, and for much of the Nebuta Matsuri’s 300-year history they were covered only in washi, a type of paper handmade from the paper mulberry plant.

But Takenami admits that these days, the floats aren’t entirely traditional. “We had cases where sudden downpours during the parade ruined the paper, so I use a non-handmade paper that includes some synthetic fibers to make it rain resistant,” he says. “You can still see the paper fibers in it, like handmade washi, and it shares many of the qualities. But it isn’t pure washi.”

That’s an understandable tweak on tradition, one that has become more commonplace, as machine-made paper has largely replaced washi throughout the country. But the painstaking process of making the paper by hand is still practiced in a handful of cities and towns. The washi made in three communities received UNESCO Intangible Cultural Heritage status in 2014.

“It’s important for the techniques to not die out in the future,” says Takeshi Kano, one of many artisans who are making sure the traditional way stays alive. “Nurturing the next generation of artisans and properly passing on the knowledge is crucial, as is creating an industry where we can thrive financially as well.”

According to the Nihon Shoki, a chronicle of Japan that was written in A.D. 720, paper was introduced by Korean Buddhist monks in the early A.D. 600s. At that time, paper was initially used for writing scriptures as Buddhism took root throughout Japan.

In time, a homegrown adaption employing stronger fibers from plants like paper mulberry developed, and with its improved durability washi was used more broadly. Its sturdy, absorbent texture made it ideal for calligraphy and other ink-based art.

Because of the way washi filters light and its strength from intertwining fibers, it was used for paper screens in windows and doors, as well as for lanterns and lamps. Until Japan modernized and westernized in the Meiji era (1868–1912), washi was the ubiquitous paper in Japan.

But as Japan developed into a modern industrial nation, washi was replaced by other types of paper that were more cost-effective to mass produce. Most screen doors today, for example, use machine-made paper.

(The “waving lucky cat” has a fascinating history.)

One of the most storied washi in Japan can be found in Mino, whose Edo-era (1603–1868) merchant quarter glows from lanterns during the city’s Washi Akari Art Festival in October. The lanterns are made by everyone from elementary school students to skilled artists, but all use locally made Mino Washi, the collective name given to various grades of washi produced in the area for more than a thousand years.

Takeshi Kano is one of just eight artisans in Mino qualified to make honminoshi, the purest and most traditional form of Mino Washi, which accounts for roughly 10 percent of all paper made in the city. To receive that qualification, a papermaker has to train for at least 10 years under a member of the Association for the Preservation of Honminoshi.

In 2014, that tradition of making honminoshi received UNESCO Intangible Cultural Heritage status, along with sekishubanshi paper in Hamada (Shimane Prefecture) and hosokawa paper in Ogawa/Higashi-Chichibu (Saitama Prefecture). In designating these areas, UNESCO wrote: “The people living in these communities take pride in their tradition of washi-making and regard it as the symbol of their cultural identity.”

“[The designation] wasn’t about washi or the people who make it; it was given to the techniques of making washi,” explains Kano. “Honminoshi, for example, must be made entirely by hand and use only three ingredients: kozo (paper mulberry), water, and neri, a plant mucilage that ensures the even dispersal of paper fibers.”

Like honminoshi, sekishubanshi and hosokawa are also fully handmade and use only kozo. They’ve also had similar uses over the years, although one distinctive use of sekishubanshi is to make the performers’ masks for the region’s Iwami Kagura, a theatrical dance with roots in Shinto rituals. Other types of washi, such as the non-honminoshi paper made in Mino, can use a combination of kozo, mitsumata (paper bush), or a shrub called gampi, and can include dyes to create different colors.

The UNESCO-designated papers are all made using the same painstaking process that artisans have been using for centuries. It begins by steaming the kozo until the the bark becomes soft enough to be stripped away. The inner bark is rinsed—traditionally in the cold flow of a river or stream, which also exposes it to sunlight that naturally bleaches it.

The bleached bark is boiled in an alkaline soda-ash solution to remove the pectin that binds the bark fibers together. Then, papermakers embark on a painstaking process called chiritori, where the fibers are placed in frigid water, while the papermaker carefully plucks out lingering specks of dirt and dust.

From there, the makers soften the fibers by beating them, and then mix them in a vat with water and neri to form a pulp. A hinged wooden frame called a suketa is dipped into the pulp to form sheets. The frame closes to hold a bamboo mat, onto which the pulp fibers cross from a gentle rocking motion. Finally, the sheet is removed from the frame, pressed overnight, and placed on boards to dry. In all, it can take up to several weeks for a batch to go from pulp to paper.

(See how paper is still being made by hand in Europe today.)

On the paper trail

At places like Ishikawa Mino Washi Paper Goods Workshop, housed in one of the historic udatsu buildings, visitors can make washi dolls and other handicrafts. At the Mino Washi Museum visitors can try their hand at making the paper using a small version of the kind of suketa Kano uses. For a deeper dive, Washi-nary shop runs tours in Mino that take in a paper mulberry plantation, artisan’s workshop, and a mill.

In the rural surrounds of Echizen Paper Village in Fukui Prefecture, roughly 60 mills produce washi—some fully handmade, others incorporating modern technology. Every May, the local shrine holds a three-day festival to celebrate a paper goddess. But throughout the year, visitors can make washi with local artisans at the Udatsu Paper and Craft Museum or tour some of the mills. Even in Tokyo, 17th-century paper wholesaler Ozu Washi runs washi-making experiences and stocks handmade sheets from all over Japan.

Washi may not be the only paper in Japan these days, but it’s still going strong. It’s even got Olympic credentials. This summer, if the pandemic-delayed Tokyo Olympic and Paralympic Games go ahead, athletes finishing in the top eight in their event will receive a certificate of achievement printed on honminoshi.