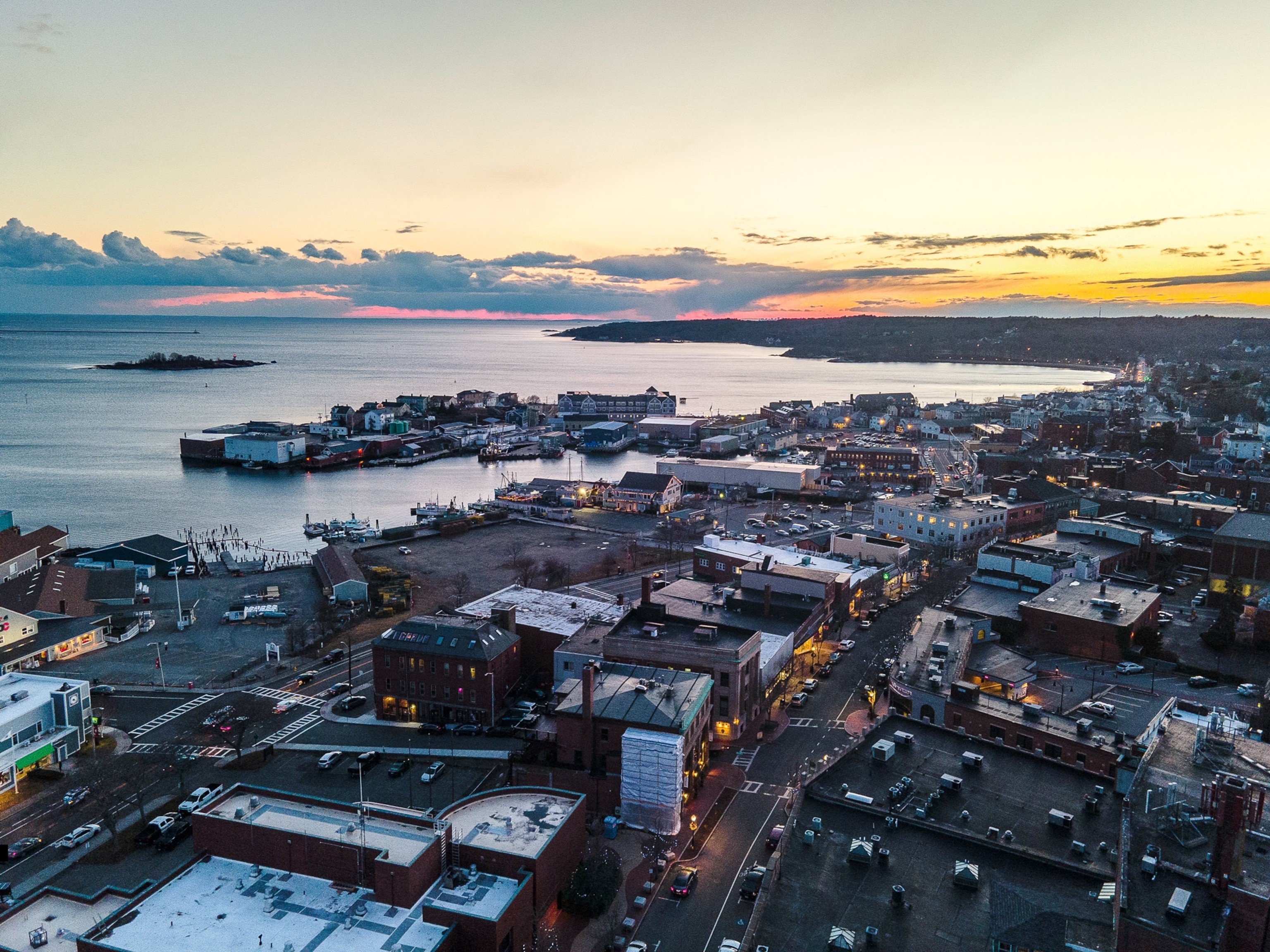 THINK OF CAPE ANN as Cape Cod’s saltier sister, a hard-working fishing community that’s about as old as the Plymouth Colony. It’s weathered and welcoming, bucolic and blue-collar. In other words, it’s as quintessentially New England as a dropped “r.”

Its briny appeal partly explains why this cape, located about an hour outside of Boston, Massachusetts, seems to hide in plain sight compared to much-ballyhooed Cape Cod. Yet its combination of charming seascapes and colonial history have turned this spit of sand into an artistic hub—one with a storied past.

Schools of artists have flooded these ship-strewn shores for centuries—painters and poets like Edward Hopper, Winslow Homer, and T.S. Eliot were drawn to the wildness of the sea, while sculptors like Walker Hancock and Paul Manship (creator of Rockefeller Center’s golden Prometheus statue) came for Cape Ann’s abundant granite quarries.

“I think it’s fair to say that Gloucester Harbor is probably America’s most painted harbor,” says Oliver Barker, director of the Cape Ann Museum, located blocks away from the water in the main city, Gloucester.

There’s a reason why all these artists flocked to Gloucester (locals pronounce it “glaw-stah”). Sure, the whole region is a vignette of lobster traps, frothy waters, and fishermen with stories to share. But why is there a constant swelling of creativity here when there’s equally romantic seaside scenery elsewhere?

Inspiration of the sea

Short answer: The quality of the light. Golden hour in Gloucester languishes throughout the entire day, illuminating backdrops in a glow that would put Johannes Vermeer’s work to shame. (Sorry, Vermeer.) No, we’re not just looking at Cape Ann through rose-colored glasses—according to Barker, this otherworldly light is caused by the presence of granite along the seabed.

Still, it’s hard to believe that a pull-yourself-up-by-your-rubber-bootstraps fishing community also boasts atmospherics recalling a 19th-century oil painting. A lot of artists probably had their doubts, too—until they actually arrived, and finally saw the light.

“My work is happiest in this light,” says artist Jacqueline Ganim-DeFalco, who assembles abstract jewelry from sea glass found on Cape Ann’s shores. “And I know painters especially love the light because the scenes are always changing here.”

At the Cape Ann Museum, you’ll see how a variety of artists translated Gloucester’s canvas-worthy harbor onto actual canvases. Most notable is native Fitz Henry Lane, whose 19th-century works originally hung in the shop windows on Main Street or in the living rooms of local ship captains.

Art totally gets into your DNA when you move here.”
ByJacqueline Ganim-DeFalcoGloucester glass artist

Now, Lane’s paintings have found a permanent home in the museum’s newly refurbished gallery dedicated to this hometown hero. There’s also a sculpture of this favorite native son perched on a rock near the water, bronze sketch pad and pencil in hand.

Many of the artists here set up their easels at Rocky Neck, a small peninsula in Gloucester Harbor that became one of the country’s oldest working art colonies. Now on the National Register of Historic Places, Rocky Neck has offered painters, sculptors, and writers—including Rudyard Kipling and Louisa May Alcott—a home base for more than 150 years. Aside from its sweeping views of the harbor, this area also gave artists a front-row seat into the daily lives of local fishermen.

“The maritime industry in Gloucester has always provided captivating subject matter for artists,” says Courtney Richardson, director of the Rocky Neck Art Colony. “There’s a funny story about a fisherman who was invited by an artist to model. The man got home from work, washed up, shaved, and dressed to the nines, only to be sent home by the artist who told him to return when his beard grew back, and he was wearing his foul-weather gear.”

Gloucester’s tradition of fishing history started in Paleolithic days, when Indigenous communities spent summers catching seafood and farming the land along the cape, leaving behind piles of shells or “middens.” When the English arrived in 1623, the Algonquian-speaking Pawtucket tribe already occupied self-sustaining settlements along the harbor. You can learn more about Indigenous history in Gloucester, and view artifacts like arrowheads, fish hooks, and agricultural tools, at the Cape Ann Museum.

Schooners, a type of ship well suited to cod-fishing, were invented in Gloucester, Massachusetts. This 1930s image shows the launch of the Gertrude L. Thebaud.

Gloucester fishermen are shown mending their nets in 1975.

Gloucester has baited commercial fishermen with the promise of fresh cod since 1623. The first schooner, a sailing vessel that revolutionized the fishing industry, was developed here in 1713. Even the iconic, yellow-clad Gorton’s Fisherman character originally hails from Gloucester, as does the frozen seafood company that created him. (Look closely at the logo on those fish sticks: he’s at the helm of a schooner.)

Tales of this port city have also made waves on screen, from the tragic story of a Gloucester-based crew in The Perfect Storm to the deep-sea dispatches on National Geographic’s Wicked Tuna. The reality show, which follows a crew of Gloucester’s own as they attempt to reel in prized bluefin tuna, premieres its 10th season on February 21, 2021.

A great way to get a sense of both the region’s maritime history and its creative allure is to walk the self-guided Rocky Neck Art Trail. You’ll stroll past the barnacle-studded wharves and pastel cottages that inspired artists-in-residence—including Homer, Hopper, Fitz Henry Lane, Augustus Buhler, and Marsden Hartley—from the 1850s to the 1950s.

Contemporary artists continue to answer the siren call of Gloucester’s shores, setting up studios beyond the one-square-mile confines of Rocky Neck.

“Art totally gets into your DNA when you move here,” says Ganim-DeFalco, whose sunny studio brims with jars of multicolored sea glass stacked like jewels in Aladdin’s cave. “So many people who are creating art here now never even thought of themselves as artists. But if you’re going to live in such a beautiful place, you want to participate in that beauty.”

Visitors can peek into the artistic process, and see the beauty that comes out of it, through Cape Ann Artisans’ open studio tours (offered in June, August, and October 2021). Each season, around 15 artists—mosaic makers, ceramists, jewelers, and others—welcome the public into their workspaces to learn more about local color.

(See why Maine’s natural beauty inspires so many artists.)

Starting to feel inspired? Gloucester tends to have that effect. Luckily, the area offers plenty of outdoor spaces to spark creativity—or, to simply explore. Visit the new Cape Ann Museum Green, a pastoral patch of land surrounded by historic homes that Fitz Henry Lane used to paint. Revamped in 2020, the green will soon feature a rotating roster of contemporary art exhibitions and outdoor sculptures by up-and-coming creatives.

At the Eastern Point Lighthouse, once home to plein air painter Winslow Homer, you can walk the plank (aka the 2,250-foot Dog Bar breakwater jutting out from the base of the lighthouse) for a panoramic perspective of the rocky coastline.

On a sunny day, bask among the white-sand dunes of Good Harbor Beach until low tide hits, and the sandbar to the neighboring Salt Island emerges. Explorers of any skill level can meander the now-exposed ocean floor in search of buried treasure, i.e. hermit crabs. If you just feel like watching fishermen do their thing, head back to the docks along Gloucester Harbor, where it all began.

T.S. Eliot once wrote that Gloucester was “the most beautiful harbor for small ships.” Perhaps that sense of movement is the ultimate allure. Because even after centuries of changing tides, artists still keep creating, fishermen still keep catching, and Gloucester’s ineffable light still keeps shining through.