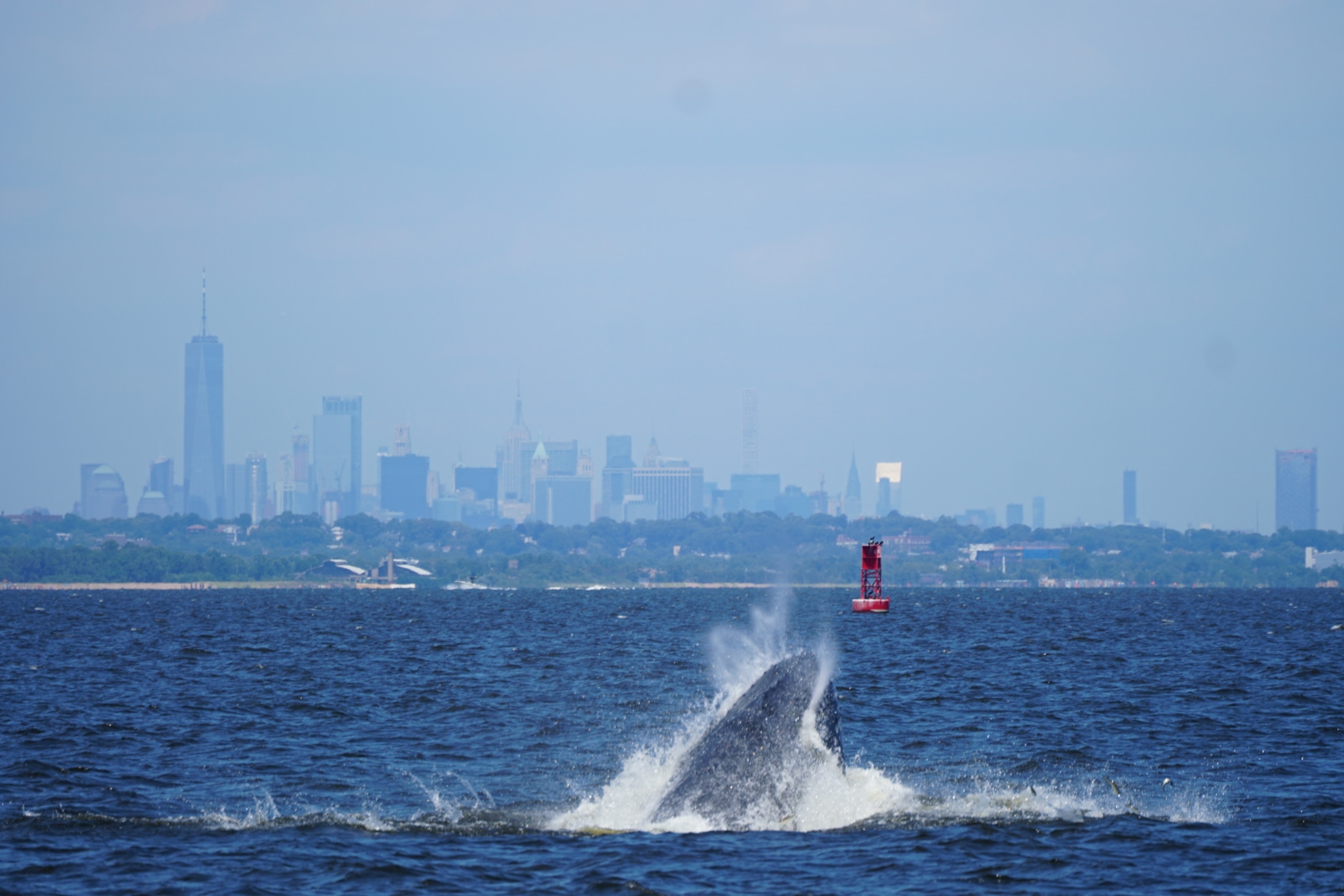 Why whale watching is having a moment—in New York City

With cleaner waters and more available food, humpbacks are making a splash in the Big Apple to the delight of whale watchers and conservationists.

New Yorkers were stunned in early December when a creature as big as a school bus surfaced from the Hudson River. “We couldn’t believe it,” one woman told NBC News, “a whale in the middle of the Hudson.”

Over the next three days, the humpback whale cruised by several popular tourist destinations, including the Intrepid Sea, Air, and Space Museum on Pier 84, One World Trade Center, and the Statue of Liberty, where a journalist snapped a photograph of the animal seemingly waving its tail at Lady Liberty.

Comedian Stephen Colbert joked on the Late Show that the whale had almost certainly come to pursue its Broadway dreams; he even created a music video of its city tour to the tune of Frank Sinatra’s New York, New York, in whale song.

Danielle Brown, a biologist with the nonprofit research organization Gotham Whale, first heard about the rare sighting when witnesses started tweeting photographs and video. “I immediately knew it was a familiar animal,” Brown says. “You could clearly see the unique markings on the dorsal fin, including a circular scar from a barnacle. When I looked through the catalogue of 212 animals that Gotham Whale has documented since 2012, I saw it was a whale identified as NYC0089, which we first saw back in 2018 off Jones Beach.”

Zoom in to see where a celebrity humpback was spotted in New York City in December 2020.

Humpback whales don’t often pop up in New York Harbor. The last celebrity cetacean visited in 2016 and stayed for about a week. Scientists say NYC0089, which hasn’t been spotted in several weeks, has likely returned to deeper waters south of the Hudson. Still, the frequency of whale sightings in the broader area known as the New York Bight—an indentation of the Atlantic coast spanning from Cape May, New Jersey to Montauk Point on the eastern tip of Long Island—has soared in recent years.

It shows that what we’ve been doing is working, so we need to keep doing that—and more—to protect these species.
ByDanielle Brown, Gotham Whale biologist

“With these increasing numbers, it’s not surprising that you’re seeing them in some unusual places,” says Brown. “Including the Hudson River and Staten Island.”

Scientists say rising whale sightings are likely related to purer water and a brimming buffet of Atlantic menhaden, a fish favored by humpbacks, resulting from landmark environmental regulations passed in the 1970s as well as New York city cleanup efforts. “Seeing more whales in this area is a sign that the waters are cleaner and there’s more food here for these whales,” Brown says. “It shows that what we’ve been doing is working, so we need to keep doing that—and more—to protect these species.”

By coincidence, I had a glimpse of NYC0089 just two weeks prior to its splashy city performance. On a 60-degree day in late November, I was on the upper deck of the American Princess whale-watching ship, scanning the waters off Rockaway Beach, Queens, in hopes of glimpsing the spout of an exhaling giant.

“Normally we see at least one whale—our success rate has been 97 percent,” American Princess captain Frank DeSantis told me. “People are always surprised to see whales here, but we’ve been doing these cruises for 10 years, and each year there’s been more and more sightings. Mostly humpbacks, but also fin whales, minke whales, and even the North Atlantic right whale, a critically endangered species.”

Whale watching trips have provided essential data that is helping researchers better understand the animals’ movements, nutritional needs, behaviors, and health. Earlier in the fall, a Gotham Whale volunteer aboard the American Princess photographed a North Atlantic right whale that was wrapped in fishing line and badly injured. Scientists now estimate that only about 360 of the animals are left. Entanglements in fishing gear and ship collisions, common whale threats, are considered to be the main culprits driving them toward extinction.

(Related: Seas quieted by pandemic could reduce stress and improve health in whales.)

DeSantis steered toward Rockaway Beach, where Raritan Bay opens into the Atlantic. As passengers waved at the fishermen perched on a jetty at Breezy Point, Gotham Whale naturalist Celia Ackerman showed me photographs of cetaceans seen in recent years. “Just like no two people have the same fingerprints,” she said, “no two whales have the same fluke pattern.”

There have been many days when Ackerman has seen multiple whales on one cruise, but “seeing even one, considering where we are, is really special,” she said.

An hour after leaving the dock, Melissa Oliver, a fellow passenger on the upper deck, was worrying that the cruise might be a bust. Oliver, a nurse, and her husband Nathaniel, a personal fitness trainer, brought their daughter Miah on the cruise as a special New York City sendoff. They were preparing to move to Austin, Texas, after being cooped up for nine months in an East Village apartment during the COVID-19 pandemic. Four-year-old Miah, with curly brown hair pulled into a side ponytail, was giggly with excitement at the possibility of seeing a whale or a dolphin—or a mermaid.

Suddenly, one of her wishes was granted: “Whale at one o’clock!” Ackerman shouted. DeSantis cut the motor and we drifted slowly, parallel to the animal, keeping a safe distance in order to avoid disturbing the humpback, as required by federal laws protecting marine mammals.

(Related: How much is a whale worth? Millions, argue some economists.)

Ackerman identified the whale by the circular scar on its dorsal fin—NYC0089. “We’ve seen this one before,” she said. “In 2018, off Jones Beach.” (Ackerman never suspected that she’d soon see NYC0089 again—in pictures and video on the internet—during its city tour.)

We watched in awe as the whale approached a school of Atlantic menhaden visibly roiling the sea’s surface in a desperate attempt to escape the gaping mouth of a 40-ton predator. Then the leviathan erupted from the water, its maws teeming with silvery fish. “Whoa!” Ackerman said. “It’s lunge feeding.”

The majestic beast disappeared momentarily, then resurfaced with a spout of mist that we soon smelled—whale breath—aptly described as a mix of farts and fishiness. “Disgusting!” one passenger yelled.

“I guess that’s another reason to wear a face mask,” Ackerman deadpanned, referring to the facial coverings that we were wearing as a safety precaution to avoid the spread of COVID-19.

NYC0089 took another pass at the school of menhaden, then slipped beneath the surface, leaving us to wonder where it would pop up next.

A southern right whale encounters a diver on the sandy sea bottom off the Auckland Islands, New Zealand. Adults can reach lengths of 55 feet and weigh up to 60 tons.

In September 1609, when Henry Hudson first sailed to the island then known to the Lenape as Mannahatta, the explorer would have likely seen whales in New York Harbor. But that placid scene quickly faded. “Many early settlers in the region came here specifically for whales and the whaling industry,” Brown says. “Humpbacks, finbacks, sperm whales, and North Atlantic right whales were commonly hunted from shore.”

Since then, there has been an unusually high number of humpback mortalities along the Atlantic Coast. In the last four years, 140 dead humpbacks have been discovered along the coast from Maine to Florida, according to NOAA Fisheries, the U.S. agency that tracks whale populations. More than a third of them were found in the New York-New Jersey area. Many appear to have died from collisions with boats, according to scientists.

“New York and New Jersey are the busiest ports on the Eastern Seaboard,” says Howard Rosenbaum, a renowned whale expert at the Wildlife Conservation Society, a global nonprofit headquartered in Bronx, New York. “As the animals are increasingly using this habitat, they’re coming into contact with ships, and the risks of them getting hurt or killed increases.”

Rosenbaum is working with a team of researchers using high-tech acoustic equipment to eavesdrop underwater, with the aim of detecting marine mammals and ultimately warning mariners to slow down when the animals are in the area. Peak season for humpback sightings is April through December. While most humpbacks hang out near the Equator until spring, Rosenbaum says that the New York acoustic recorders are detecting them even in the midst of winter, underscoring the importance of warning boaters who might not expect to encounter whales in the off-season.

Public education provided by whale watching tours—and visits from whales like NYC0089—are raising awareness about the animals. “People have often lived here their whole lives and never seen a whale—it really surprises them,” Brown says. “They realize that they can do things for the whales, including being careful with their trash, never releasing balloons, and boating responsibly.”

It’s important for recreational boaters to follow the same guidance as whale watching ships when they see whales, scientists say, including slower speed limits, maintaining a distance of at least 100 feet from common whales such as humpbacks, and 1500 feet from endangered North Atlantic right whales.

“You have to remember that these animals are focused on feeding; they eat hundreds and thousands of pounds of fish in a day,” Brown says. “And they don’t always pay attention to their surroundings. You don’t want to disrupt their feeding, or risk getting hurt.”

In June, two boaters fishing along the New Jersey shore were tossed into the ocean when a feeding humpback whale surfaced and capsized their small ship. A video of a similar incident involving two kayakers in California went viral on the internet in November. Some witnesses were concerned that the kayakers would be swallowed by the whale. In both cases, neither the people nor the whales appeared to have been injured.

The animals were just doing what whales do naturally, Brown says. “If they see a delicious school of fish, they’ll go for it.”

That’s likely why NYC0089 made its Manhattan debut, she says—not to pursue its Broadway dreams, but to dine on New York City’s fine seafood.