4 of the Best Wheelchair-Accessible Trails in U.S. National Parks

From rolling into the great, wide open to seeing gators up-close, these national park trails offer wheelchair users a variety of experiences.

For wheelchair users, the great outdoors can often be a no-go. With frequent rough terrain and other unexpected barriers courtesy of Mother Nature, people with disabilities sometimes opt for the safer bet of being indoors rather than out exploring. However, at many of the national parks in the U.S.—which promise compliance with the Americans with Disabilities Act of 1990—it is completely possible to have some fun in the sun, no matter your abilities. Here are four of the best accessible trails in U.S. national parks. 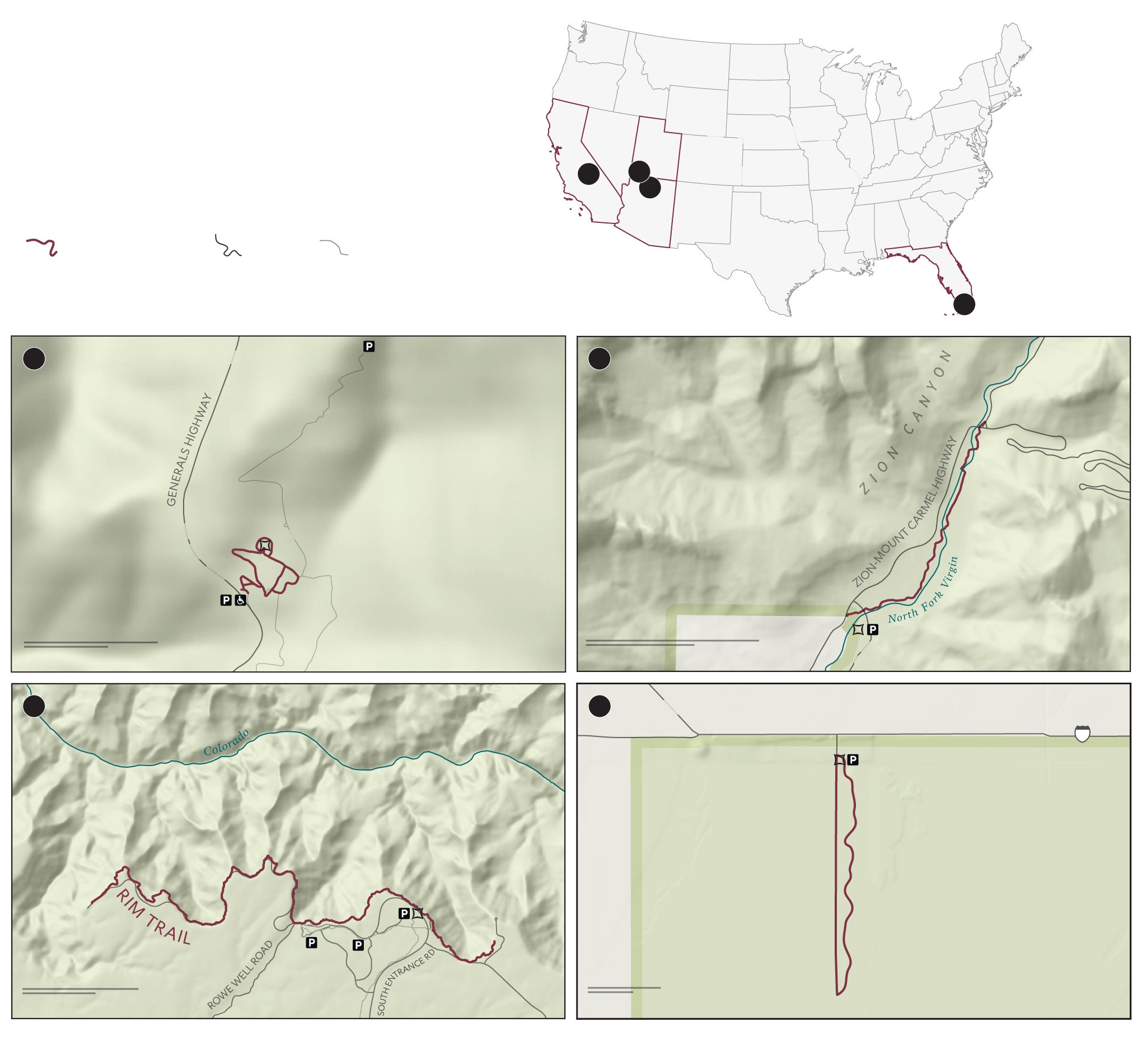 Rough terrain and unexpected barriers can pose difficulties for wheelchair users looking to explore the great outdoors. Paved trails at these U.S. national parks help wheelchair users get up close and personal with nature.

Rough terrain and unexpected barriers can pose difficulties for wheelchair users looking to explore the great outdoors. Paved trails at these U.S. national parks help wheelchair users get up close and personal with nature.

You won’t spot any sharks on this trail, but you may see quite a few alligators. Located just 40 minutes west of Miami, this 15-mile loop in Everglades National Park is extremely wheelchair-friendly.

“My favorite thing about Shark Valley is that I can get close to the alligators without disturbing their natural habitat. There aren’t many places I know of where you can do that safely and accessibly,” says Jessika Kattah, a Florida resident and manual wheelchair user.

If you prefer not to wheel yourself on the trail, there's also an accessible tram that can hold two wheelchairs with advance notice.

At only a few hundred feet long, this accessible trail in Sequoia National Park might be short, but the mighty tree at the end of it is anything but. With a height of 275 feet and a diameter of over 36 feet at the base, the General Sherman Tree is the world’s largest by volume.

Candy Harrington, author of Barrier-Free Travel, says that the quarter-mile paved trail “has excellent wheelchair access” with accessible parking and restrooms nearby. She has visited the General Sherman Tree at least 50 times, but still remembers the first time she ever laid eyes upon it. “I was about five years old when I first saw the tree. I was truly in awe and I just stood there and kept staring up until my dad prodded me along,” Harrington says.

Is it possible to mention national parks without talking about the magnificent Grand Canyon? Likely not, and for good reason—the Grand Canyon is one of Earth’s most spectacular sights, and also one of the most accessible.

Many points along the South Rim Trail are suited for wheelchair users. As well as majestic canyon vistas, the South Rim offers accessible parking spaces, several hotels with adapted rooms, and a visitor’s center with an accessible restroom.

Lynn Houston has visited the South Rim Trail multiple times in her manual wheelchair. Her area of choice for admiring the Grand Canyon is near the hotels and lodges. Houston says she loved “being able to see the canyon while seated. There are smooth areas where you can get a great view without being tall or able to stand.”

Most states are lucky to have just one national park, but Utah has five. The most visited is Zion National Park in the southwestern part of the state, and with its popularity comes excellent access for those with disabilities. [Take a road trip to Utah's "Mighty Five" national parks.]

There are a couple trails in Zion that you can roll on, but the most wheelchair-accessible one is undoubtedly the 1.5-mile-long, eight-foot-wide Pa’rus Trail. The best part? You won’t get bumped around along the smoothly paved trail.

An accessible restroom is available in the Visitor’s Center at the trailhead, along with accessible parking spaces, meaning Zion National Park’s tremendous natural beauty is open to people of all abilities.

These four paths are only a fraction of the many wheelchair-friendly trails across America’s national parks. Whether you aim to admire see-it-to-believe-it sights or get up close and personal with animals (though not too close), the plethora of accessible trails offer overwhelming possibilities to get rolling in the great outdoors.

Cory Lee Woodard is a wheelchair user and travel writer, writing the award-winning blog Curb Free With Cory Lee since 2013.