Why America’s National Scenic Trails matter more than ever

While thru-hiking the Appalachian Trail, I walked some five million steps. On the Pacific Crest Trail, six million. On the Continental Divide Trail, just about seven million. But for each, the best step was the first.

As I took that initial stride from the southern terminus of each of those National Scenic Trails—Springer Mountain, Georgia; Campo, California; and Crazy Cook Monument, New Mexico, respectively—the anxiety of planning and endless checklists evaporated. All that remained was the rush of possibility. With thousands of miles before me and my husband beside me, I could feel that familiar thrill shivering up my spine.

Two years ago, the National Trails System celebrated its 50th birthday. Congress passed the 1968 act to promote the establishment of scenic trails as well as recreation and historic trails. Now the network of government-protected paths numbers more than 1,000, including the 11 National Scenic Trails, which range from long hauls such as the 4,600-mile North Country NST to shorter jaunts like the 220-mile New England NST and encompass around 18,000 miles. Every year thousands of people hike, bike, and horseback ride through rocky mountain passes and vast grasslands. 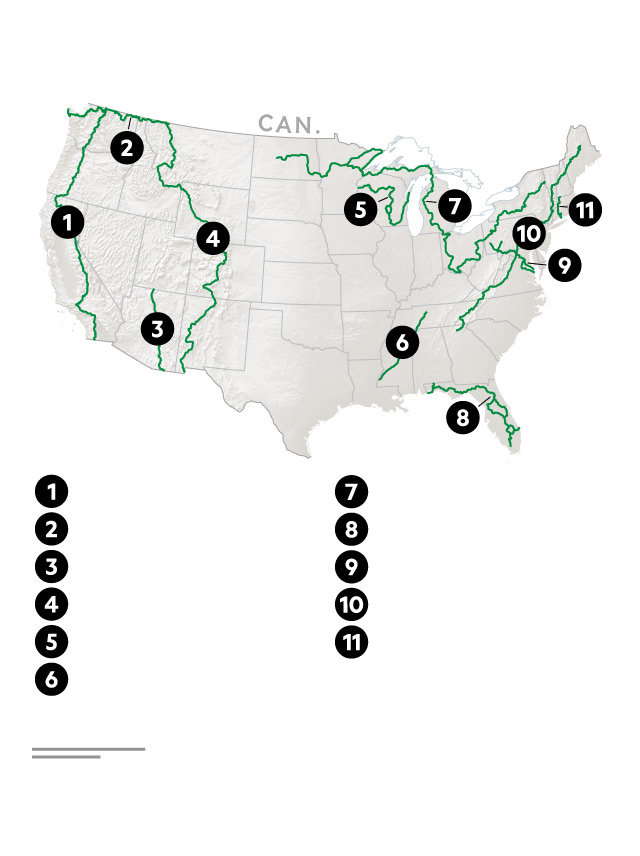 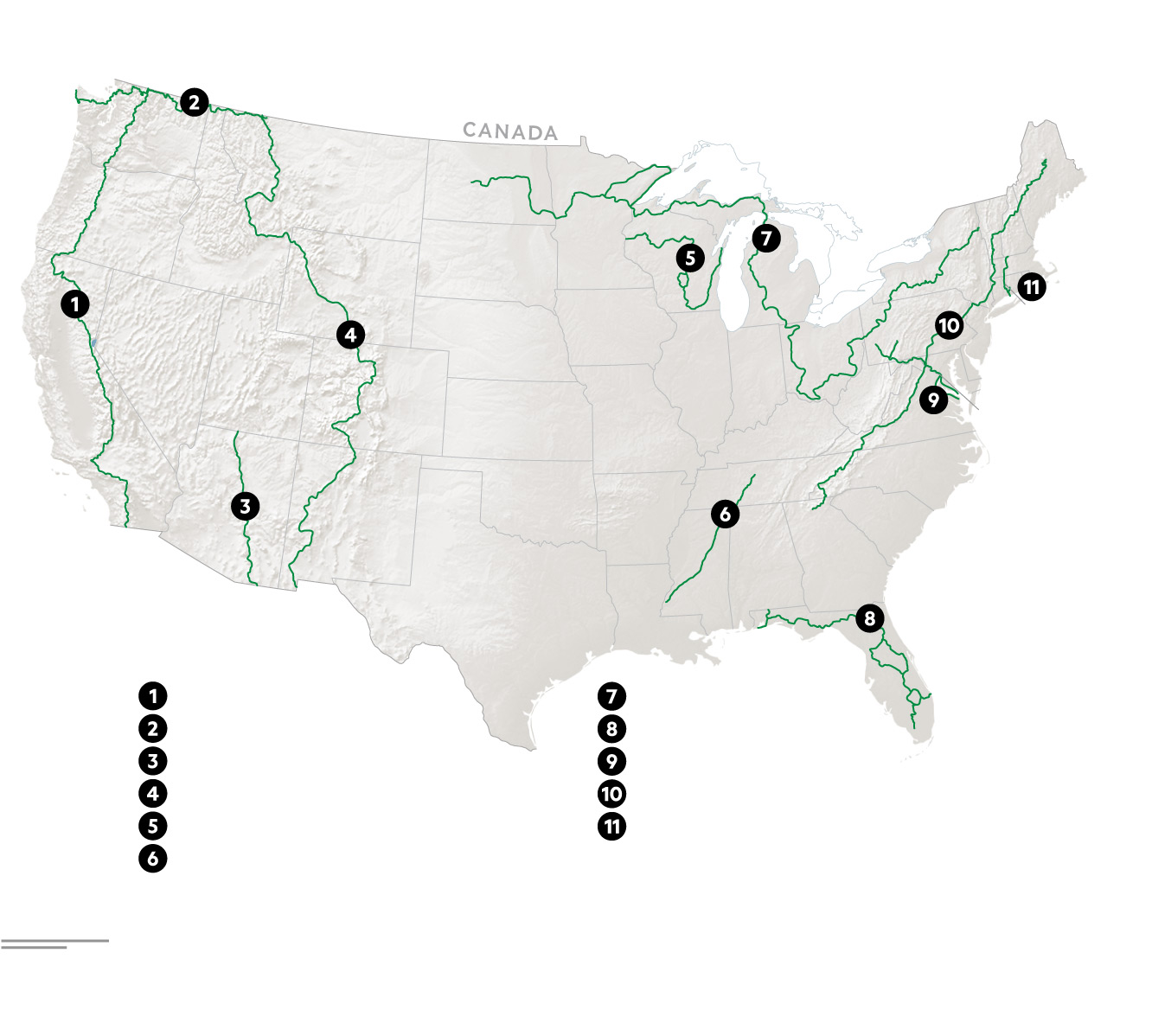 Recently these journeys have been complicated by the coronavirus pandemic. Trail organizations, such as the Appalachian Trail Conservancy and the Pacific Crest Trail Association, have urged their usual classes of prospective thru-hikers to stay home or hike locally where regulations permit. Some portions of trails were closed. But not all hikers followed these instructions, and a handful risked not only their own safety, but also the safety of people in trail-adjacent towns, to pursue their own thru-hiking goals. International travelers were uniquely affected, as many plan their visas and trips to hike the U.S. trails well in advance, and some hikers who were already on trail at the start of shutdowns found it difficult to return to their home countries.

(Related: With trails opening, is it safe—or ethical—to go hiking this summer?)

While a long thru-hike in the woods may seem like an ideal activity for social distancing, the reality can be far from a walk in the park. Hygiene is not easily maintained away from water taps and hand soap; waste- and water-borne pathogens like norovirus are a common occurrence among thru-hikers every year, particularly where scarce water sources or camping sites lead to close quarters. Hikers must also enter local towns, typically once every five days or so, to buy food or pick up their boxed rations from the post office. This is often accompanied by a visit to a restaurant or a hostel for a shower, which can mean that a long-distance hiker defying quarantine orders may become a vector of disease walking town-to-town.

But the good news is that, by design, the National Scenic Trails are here to stay. They will be around for thru-hikers long after the virus subsides. And in the meantime, there are opportunities to explore shorter sections responsibly.

What draws hikers to these trails is not hard to understand. The trail works its magic; footsteps transform dots on a map and notes in a guidebook into real places. The swimming hole. The campfire under the full moon. The aspen grove. And once passed, those dots and notes are further transfigured into cherished memories.

Hikers are also transformed—and christened anew, with the adoption of a trail name. Early on the Appalachian Trail, I decided to be “Knock on Wood” due to my knee-jerk reaction when others made predictions about the adventures that we would have. To my greenhorn self, bold predictions seemed to tempt fate.

Although I originally took on my name as a joke about my fears, I now see it more as a promise to appreciate each day on trail. Against the ponderous time lines of the lands we walk, our human lives seem brief and insubstantial. Each moment on trail is a gift.

I dreamed of the Sierra Nevada mountains long before I reached them along the Pacific Crest Trail in 2017. The previous 700 miles of the trail had been dry, so it had been hard to envision the high snow and roaring rivers of the mountain passes, their danger and their beauty. I knew the land would be harsh, stark, pure. I knew that I would feel fear as we crested the heights. But I did not know, not in my heart or bones, how my knees would tremble when I faced a steep, hundred-yard-long glissade down Sonora Pass. Night was falling fast as my husband, our friends, and I reached the final leg of the pass. The top of the snow was slushy from the day’s heat, and I felt as if I were looking through a fish-eye lens as I struggled dizzily onto the steep snowfield.

Our friend “Kickstep” gamely went first, gracefully plunging down the pass, shrinking to ant size in the gathering dusk. “Flowers” was next, then my husband, “Honeybuns.” Finally, me.

I sat in the slush, quivering, as the sky turned violet above me. My friends below shouted encouragement. The chute of snow, carved by fellow hikers, seemed endless. I nudged myself forward with my heels. And then gravity took over.

Using my ice ax to brake and emitting a shrill wail the whole way, I skidded and shrieked to the bottom. Breathless and exhilarated, I staggered to my feet and watched the stars coming out, marveling at the wonders around me. And in me.

I believe we leave behind some part of ourselves on the paths we walk. When I first started on the Appalachian Trail, I was hoping to follow in the footsteps of my cousin Jen, 11 years my senior, who had thru-hiked the A.T. more than a decade before. A globe-roaming hippie with a tiny pack and a zest for silly puns, Jen has always inspired me to seek adventure. On days when rain pelted down, I imagined Jen, undaunted, braving the same storm. In her favorite places, such as Bob Peoples’s quirky woodland hostel, Kincora, I felt a new connection between us.

I also felt a kinship with those unknown people who had preceded me, both thru-hikers from years prior and native peoples from long before the National Scenic Trails were established. I tried to imagine the individuals, their hopes, their stubbed toes, their faces warmed in the sun. Where did their journeys take them?

Colorado’s Rollins Pass, used historically by the Ute and Arapaho peoples and now included in the Continental Divide Trail, is covered in rock blinds from which herd animals were once ambushed. These blinds were in use for millennia. I stood among the stones, the wind chilling my bones, and tried to reach back through time to feel something of the hunters who had gathered there.

On the Pacific Crest Trail in California, it was a blisteringly hot afternoon as I staggered up Donner Pass. I loosened my hip belt and fought down my nausea. At the ski restaurant we’d stopped at earlier, my husband and I had shoveled down plates of nachos, then added most of a pie and a couple beers to boot. Now I had to sit and rest, and all I could think of was how different my experience was from that of the ill-fated Donner Party, a group of pioneers who had come more than a century and a half before.

I also imagined those who would follow. Who will walk these lands in the future? In another 50 years, may our public lands be just as cherished, our wilderness enduringly preserved. May we still find there that transformative magic.

Allie Ghaman is a backpacker, writer, and illustrator with more than 8,000 trail miles. She and her husband most recently thru-hiked the Wind River High Route and are looking forward to the Sierra High Route when the pandemic permits. Follow her adventures on Instagram.