A national park artist-in-residence captures the fragility and beauty of the desert at night.

As an artist-in-residence at Death Valley National Park, photographer Harun Mehmedinović captured images of its night skies and increasing light pollution. In this snowy shot, he caught both stars and, on the right, the glow of the city of Las Vegas.

A national park artist-in-residence captures the fragility and beauty of the desert at night.

Death Valley National Park is a land of extremes.

Stretching from California to Nevada, and encompassing the Mojave and Colorado deserts, it’s the largest national park in the lower 48 states. And the hottest: This month it charted a record-breaking August air temperature of 130°F at Furnace Creek, a natural oasis. The highest recorded air temperature—a scorching 134°—was recorded in the same place in 1913.

While the environmental challenge of extreme heat wallops the park by day, Death Valley faces another issue at night: light pollution, caused by the nocturnal glow of Las Vegas and surrounding cities. Excessive artificial light not only disrupts how we view stars and planets, but researchers have also found that it affects plants and wildlife. Nocturnal creatures such as bats and moths, which pollinate cacti, prefer to forage in low-light conditions. Scientists from Exeter University found that cacti bathed primarily in artificial light were 62 percent less likely to be pollinated

Even in remote areas like Death Valley, traces of artificial light pollution from cities as far away as 40 miles (in this case Las Vegas) can be seen in the sky directly overhead.

LIGHT POLLUTION SHOWN iN IMAGES IS LIKELY UNDER- 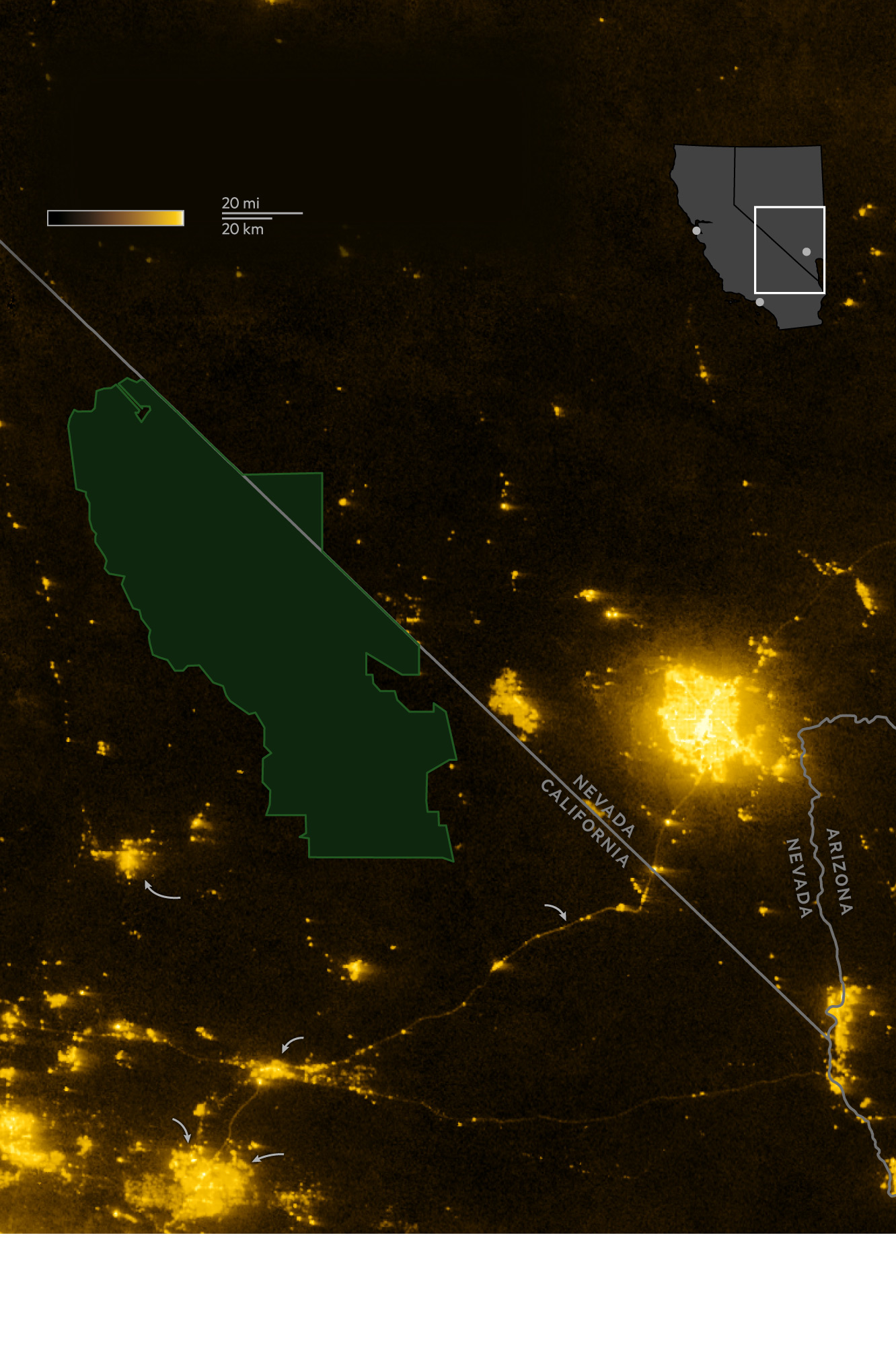 Even in remote areas like death valley, traces of artificial light pollution from cities as far away as 40 miles (in this case las vegas) can be seen in the sky directly overhead.

LIGHT POLLUTION SHOWN iN IMAGES IS LIKELY UNDER-REPRESENTED because current

The park, known for its exceptionally starry nights, received a boost in its efforts to mitigate light pollution when it was certified as a Dark Sky Park by the International Dark-Sky Association in 2013. Even then, researchers warned that, as urban life encroaches, its night skies were as fragile as its ecosystems.

As the United States becomes increasingly urbanized and developed, the dazzling night skies such as those found at Death Valley are becoming rare. Light pollution can travel more than 217 miles from its source, affecting a large area.

“At least 80 percent of Americans can no longer see the Milky Way from their homes,” Dalton notes.

(Related: Light pollution is getting worse, and Earth is paying the price.)

Before Death Valley National Park received its Dark Sky status, the National Park System (NPS) worked to reduce light pollution. It switched the park’s system to dimmable LED and LPS (low-pressure sodium) lights, which emit a soft pumpkin-colored glow. All lighting was pointed downward to reduce glare. Death Valley doubled down on efforts to protect the night stars with the family-friendly Dark Sky Festival in 2019, with photography classes, hikes with scientists, and stargazing sessions.

The park turned not only to technology but also to creativity to support its efforts to combat light pollution. Enter Harun Mehmedinović, a Los Angeles-based photographer who had explored this desert wilderness with his camera pointed toward the skies, documenting the detrimental incursions of artificial light. Some of his images came to the attention of the National Parks Arts Foundation, and at the end of 2019, the team invited him to become its artist-in-residence at Death Valley National Park.

Mehmedinović spent a month in the desert, shooting photos that catch the eye, raise questions, and start conversations. “The image is intended to grab the attention of people and have them question whether the photograph is real or fake. It’s a way to draw people in and talk about the larger issue,” he says.

(Related: These are the world’s best stargazing spots.)

Art in the parks

Mehmedinović crisscrossed the park, from the saltwater flats of the Badwater Basin to the Racetrack Playa with its “sailing stones” that move across the sand during ice melt. Occasionally a car would pass by his campsite, but he was usually alone. His only visitors were snakes, scorpions, and coyotes looking to raid his food supplies.

During these off-road journeys, he blew his tires out on volcanic rock, drove for hours along steep gravel switchbacks, and was snowed in for two weeks in the high areas. After driving during the day, Mehmedinović would try to get snatches of sleep at night, setting his camera to take time-lapse images. “It takes one photo every 30 seconds,” he explains. “I will review the photographs in the morning, and occasionally I would see a huge meteor among the images.”

Mehmedinović—a cinematographer and co-producer of Leonardo DiCaprio’s climate-change documentary Ice on Fire—fell in love with national parks when studying film at the University of California in Los Angeles. He perceived the problems of light pollution when he would pull out his camera to take nighttime shots. Along with a filmmaker friend, he created Skyglow, a photography project to raise awareness of the need to protect the night sky and highlight the organizations that are doing work to protect it.

“When you point the camera in the direction of the city and leave it on a long exposure the light burns through the image. I joke that it’s so bright it almost looks like a nuclear weapon going off,” he says.

Mehmedinović follows a long line of artists who have taken inspiration from national parks, from the Hudson River School painters in the mid-19th century to the landscape photographer Ansel Adams in the mid-20th century. There are now more than 50 artist-in-residency programs established in national parks throughout the U.S. Founded in 2006, this program helps the NPS reimagine its sites and provides both visitors and staff with a new way of seeing the environment.

(Related: Meet the ‘art rangers’ trying to save national parks.)

Know before you go

While light pollution from Las Vegas reaches the high ridgelines in the Southwest of the park, Brandi Stewart, education program manager at Death Valley National Park, says that visitors can still find the ideal spots to view the night sky. “The Ubehehe Crater in northern part of the park is a great place to stargaze because it’s further away from the low glow of Las Vegas,” she says. “You can watch a brilliant sunset at the Mesquite Sand Dunes then lay back on the dunes and watch the night sky unfold.”

Visitors can help protect the park by being mindful of how much light they are projecting: “When people are camping, they can turn off lights they are not using, and choose lamps with red settings, which reduce glare and aid night vision,” says Stewart.

But there is still a lot of work to do. “There are some campsites that have a lot of light, and those visitors might not realize the impact it’s having on others’ experiences,” she says.

Since Death Valley is one of the hottest and driest U.S. national parks, visitors should drink plenty of water and avoid hikes during the sunniest times of the day. While visitors centers and some facilities remain closed due to the COVID-19 pandemic, trails and overlooks recently reopened. Dante’s Ridge, a moderate eight-mile round-trip hike, offers expansive vistas across Death Valley to Telescope Peak. Find great sunset views (and photo ops) from Zabriskie Point, the sand dunes, Artist’s Palette, and Aguereberry Point. And if you only have two hours to explore this sprawling space, drive along Badwater Road, which features Death Valley’s most popular landmarks including Mushroom Rock and Devil’s Golf Course.

Claire​ Turrell is a freelance editor and writer based in Singapore. Harun Mehmedinović is a Bosnian-American director, screenwriter, photographer, and author.