Conservationists have been trying to trap the critically endangered rhino for months in order to bring her to a breeding center.

On Sunday morning, one of the world’s last remaining Sumatran rhinos walked into a pit trap on the island of Borneo.

Fortunately, this trap wasn’t set by poachers but by an international coalition of conservation organizations called the Sumatran Rhino Rescue, intent on saving the Sumatran rhino from extinction.

With fewer than 80 of these rare creatures now left in the wild, the hope is that this female, which has been named Pahu, will provide some desperately needed genetic diversity to the breeding population of rhinos already in captivity elsewhere in Indonesia.

(Read: “The Unprecedented Plan to Save the Sumatran Rhino”)

“When a population is down to 80 animals, every animal becomes very, very important,” says Susie Ellis, executive director of the International Rhino Foundation. “This means that the captive breeding program will be embarking on an expansion.”

“The Sumatran rhino is one of the most evolutionarily distinct mammals on the planet, and this week’s rescue is a critical step in making sure we don’t lose an entire branch of the rhino tree of life,” said Jonathan Baillie, executive vice president and chief scientist at the National Geographic Society, which is a partner of the Sumatran Rhino Rescue.

“But this is just the beginning. If we want to save this species, we need the strong support of other individuals and organizations.”

It takes a village to move a rhino

Transporting a large, wild animal is always a delicate process, but when you consider that Pahu was captured in a remote mining concession in the middle of a lowland rainforest, the tale of her extraction starts to sound Herculean.

For starters, Pahu was given a sedative before being guided into a crate, which was then secured inside of a truck. Veterinarians from Indonesia, Malaysia, and Australia worked together to ensure her safety and comfort all along the way.

At the same time, a local mining company sent a bulldozer to travel with the team in order to clear debris from the roads that had washed out due to heavy rains. And a police escort ensured that the convoy wasn’t bogged down by curious onlookers and other distractions.

All in all, the 93-mile drive from West Kutai to the nearest rehabilitation center in Kelian was completed just as the sun was coming up on Tuesday morning. And Pahu endured with flying colors.

“She’s happy. She’s healthy. She’s eating. She’s sleeping. She’s just doing all these wonderful things that we want her to do,” says Margaret Kinnaird, who has been coordinating WWF International’s Sumatran rhino efforts for the last two years. (WWF is also part of the Sumatran Rhino Rescue coalition.)

“And you know what, it happened on my birthday!” says Kinnaird. “I opened up my email and was like, ‘Oh my god, what a present!’”

Believe it or not, WWF-Indonesia and its team of local NGOs have been trying to capture Pahu since April 2018.

“The waiting period was grueling,” says Kinnaird. “But I have to give those guys in the field a huge applause, because they stuck it out for eight months and waited for this rhino to come into the trap.”

But now, a different kind of waiting game has begun.

The number of Sumatran rhinos has dropped

an estimated 70 percent in the past two

decades, mostly due to poaching. Fewer than

a hundred remain in Indonesia, in isolated

They’re small compared with other rhino

species, and females give birth about every

potential to reproduce is diminished, putting it

at a higher risk for extinction.

sightings are rare and population figures are

Pahu walked into a pit trap in Kutai Barat Regency.

Rhinos have been seen in the Kutai Barat and Mahakam Ulu Regencies, with other rumored sightings by locals. 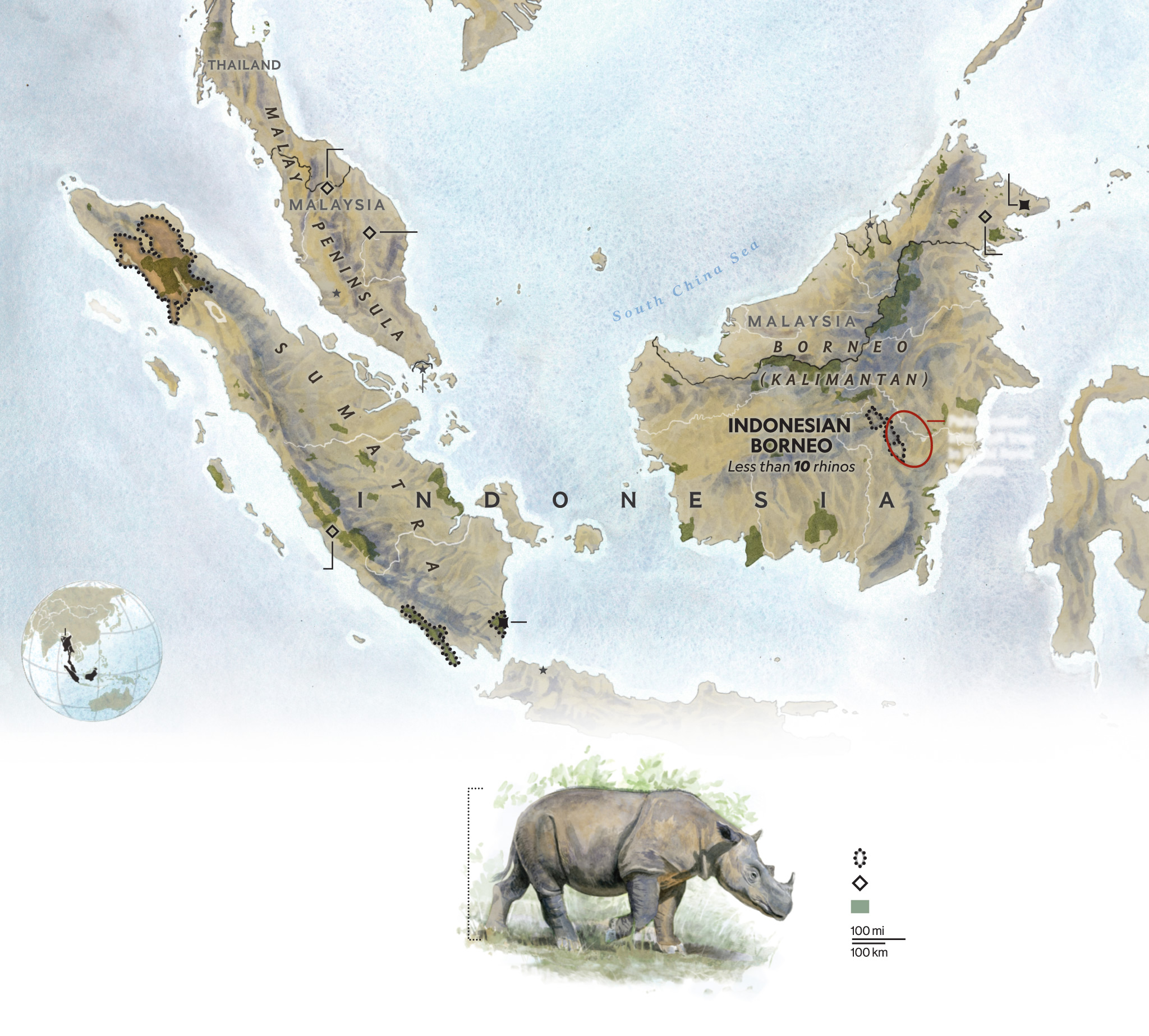 Sumatran rhinos live in remote areas, so sightings are rare and population figures are often disputed. Camera traps are the primary source of documentation.

Pahu walked into a pit trap in Kutai Barat Regency.

Small populations mean the Sumatran rhino’s potential to reproduce is diminished, putting it at a higher risk for extinction.

The number of Sumatran rhinos has dropped an estimated 70 percent in the past two decades, mostly due to poaching. Fewer than a hundred remain in Indonesia, in isolated pockets. Sumatran rhinos are solitary creatures. They’re small compared with other rhino species, and females give birth about every three to five years.

While we know that Pahu is a female, it’s impossible to say yet whether she’s old enough to reproductively mature, or worse, whether she might have already become infertile.

This is one of the reasons why conservationists are so eager to capture the fragmented populations that remain and bring them into proximity with each other. On Sumatra, for instance, the last 75 or so wild animals there are thought to be spread out among 10 different subpopulations. And on Borneo, where Pahu was captured, there may be fewer than 10 individuals left.

In order for the vets to be able to determine Pahu’s condition, they must first work to habituate her to be their presence. Even a good look at the animal’s teeth would provide important information on age.

“She needs to be trained to walk into a nursing station and allow vets to manipulate her and examine her in ways that most rhinos probably wouldn’t like to be examined,” says Kinnaird.