Exclusive analysis reveals the U.S. has a leading role in this market, which takes the lives of about 1,000 annually.

When Blake Fischer, a top Idaho wildlife official, killed an entire family of chacma baboons and other animals on a recent trophy hunting trip to Namibia, the dustup that followed—and his widely shared description of his kills—forced him to resign.

Despite widespread public distaste for the practice, a new analysis of trophy hunting for primates done by Humane Society International and shared exclusively with National Geographic shows that it’s as common in recent years as it was a decade ago.

The chacma baboon, with its distinctive downward-sloping face, tops the list of favorite primate trophies. The roughly four-foot tall creature has a taste for delectable fruits and insects, which it stores in its cheeks, and is similarly partial to available shellfish or scavenged meat.

Kills like Fischer’s are legal under international law, and unlike the hefty fees that accompany trophy hunts for large game animals like lions, leopards, or rhinos, primate trophy fees are nominal.

“It’s often free, or trophy fees can be as little as $20, so in essence people can just shoot primates,” says Iris Ho, senior specialist for wildlife programs and policy at Humane Society International. The practice, she says, “is abhorrent, and it’s really shocking to a lot of animal advocates.”

Primate trophy hunting has a long history in the United States. President Theodore Roosevelt in 1909 killed at least three baboons on a single safari when he famously shot nearly 300 African animals.

The Humane Society’s examination included the most recent available information—trophy hunting numbers from 2007 to 2016. It found that the U.S. represents the largest share of this market. During those years, 11,205 primate hunting trophies were traded internationally and 8,896—or almost 80 percent—were imported to the U.S. On average, the U.S. imported almost 890 primate trophies every year. The next highest buyer, Spain, was far behind, with a reported 490 imports in total across those nine years, followed by South Africa, with 401. Top countries of origin for the primates were South Africa, Namibia, Zimbabwe, Zambia, and Mozambique, respectively. 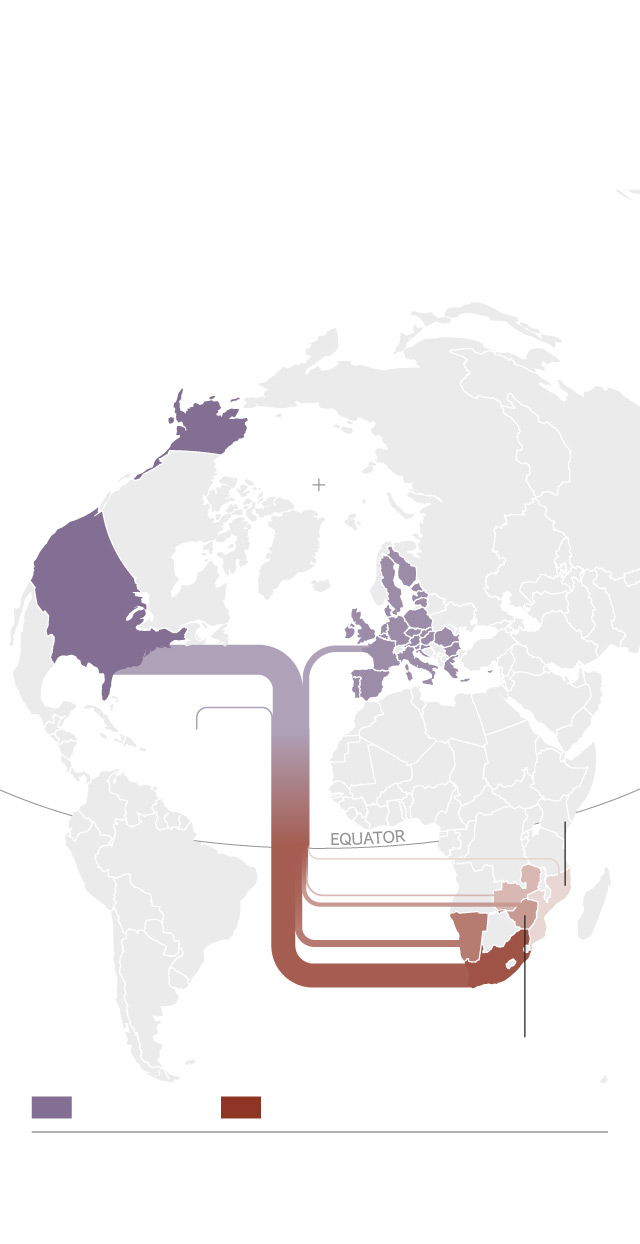 According to the analysis, chacma baboons were the most sought after, with 6,925 trophy-hunted over that nine-year span. Vervet monkeys followed with 1,400 trophies, yellow baboons with 932, and olive baboons with 635. “I’m not surprised by the dominant role the U.S. has,” Ho says, noting the popularity of U.S. trophy hunting more generally. But, “I’m still surprised about the number U.S. hunters are bringing in every year as primate trophies.”

The trophy hunting figures were collected under the Convention on International Trade in Endangered Species of Wild Fauna and Flora (CITES), the international agreement regulating international trade of wildlife. That database is not always a perfect source. Exporters and importers sometimes use different units (one entity may use number of animals, while another may count individual body parts such as teeth or the head), and an export in one year could be reported as an import in another, cautions Rosie Cooney, who heads the Sustainable Use and Livelihoods Specialist Group under the International Union for the Conservation of Nature (IUCN)—a global network of experts who assess, for example, whether trophy hunting of animals helps sustain their populations and how hunting fees benefit local communities, among other tasks.

Assuming the primate trophy records are accurate, Cooney says, the hunts don’t necessarily indicate any significant drawbacks for conservation. “Trophy hunting is of course controversial, and many dislike it on emotional grounds,” but, “from a purely conservation perspective, there are no significant issues suggested to me from looking at this data.”

These primates are also non-threatened species, according to IUCN. (IUCN publishes the Red List, a determination of which fauna and flora are endangered.) According to Cooney, “bush meat hunting and habitat loss are likely to be far more significant in all these countries for probably all these species. Reducing demand for trophy hunting of these species is likely to be quite irrelevant for conservation.”

Aside from animal welfare concerns, at the heart of the trophy hunting controversy is whether or not hunt fees end up supporting wildlife protection or restoration. Cooney says determining this is complicated, especially when hunt operators offer packages featuring a range of animals, including primates. But given that most hunting reported here is of very common species, she says, prices are likely to be low and therefore conservation contributions negligible.

“All these animals play an important role in their local ecosystems,” Ho says, “and they should not be killed just because someone wants to have fun.”