Its creators say the expanded refuge will protect the bear and many other species—but one expert says major roadblocks remain.

The huge earthquake that rocked China’s Sichuan Province 11 years ago this month was a catastrophic human tragedy. But it also drew attention to the vulnerability of the country’s giant pandas.

The magnitude 8.0 temblor destroyed large swaths of panda habitat, as well as parts of the Wolong Panda Center, a key breeding facility for the vulnerable species. Several pandas died.

Now, all eyes are back on these iconic animals as the Chinese government creates a supersize national park in their name.

The Chinese government aims to protect giant pandas by establishing a 10,476 sq mi national park. If approved, the park will link several existing habitats, creating a corridor for the bears to roam. 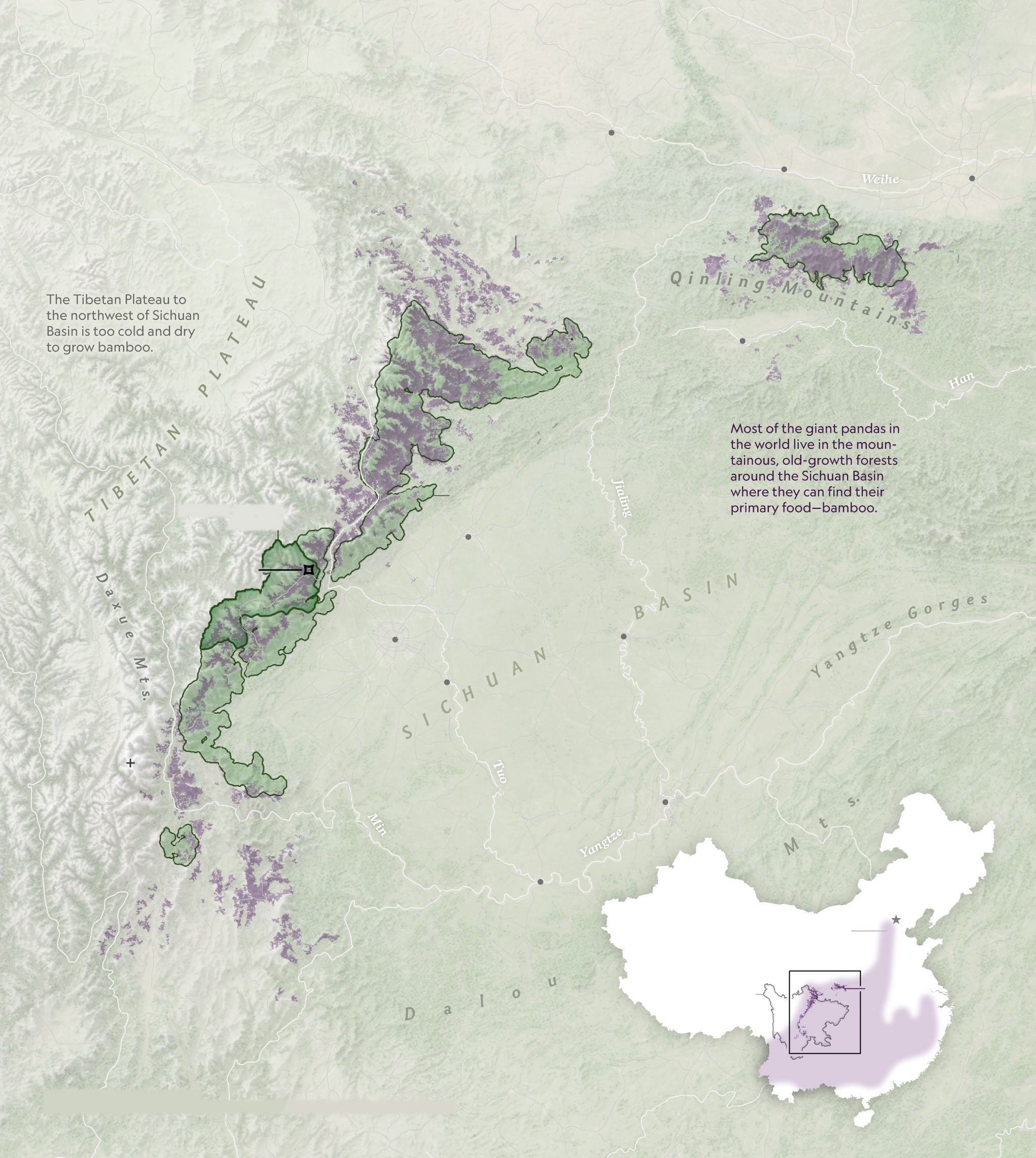 The Chinese government aims to protect giant pandas by establishing a 10,476 sq mi national park. If approved, the park will link several existing habitats, creating a corridor for the pandas to roam.

Most of the land will be in Sichuan Province, home to more than 80 percent of wild pandas. The majority of it is not “new”—it brings together dozens of established panda reserves and other protected areas containing thousands of plant and animal species, many of them threatened or endangered.

Whether the higher number is due to better counting methods or true growth is unknown, but in 2016 the International Union for Conservation of Nature went so far as to downgrade the giant panda from “endangered” to “vulnerable.”

But the large mammal is still confined to six mountain ranges and split into about 30 groups across western China. Logging, road construction, agriculture, and other human encroachment—plus natural disasters—have degraded the landscape and broken up populations. (Read about efforts to reintroduce pandas into the wild.)

The new refuge aims to connect fragmented panda habitat and, by doing so, link up bear populations, some of which have fewer than a dozen individuals.

It “takes the long view,” says Bob Tansey, China policy advisor for The Nature Conservancy. “Generally, pandas are doing well. But what will they need in the future? Connectivity.”

Theoretically, the park’s melding together of wild landscapes will improve pandas’ ability to find mates and boost their genetic diversity.

It will also give them room to roam as climate change shifts where bamboo—their main food—can grow.

To panda expert Marc Brody, designating the national park is a vital step, but it “does not directly resolve habitat fragmentation.”

The new park has promise on paper, he says, “but habitat will remain patchy until degraded lands are restored and stronger land-use restrictions get enforced that make wildlife corridors possible.”

If such corridors become reality, “that will be the exciting legacy of this park,” says Brody, a National Geographic Explorer and founder of Panda Mountain, an ecotourism and conservation organization.

The need for connectivity applies to the administration of the park as well, which is why, under the new park name, the Chinese government is working to streamline oversight and management of panda conservation areas.

In fall 2018, officials established a national administrative bureau to act as the heart of park management; provincial and local reorganizations are set to follow.

The master plan will lay out the government’s steps toward more effective conservation, such as consolidation. Previously, protected areas fell into a dozen categories, while numerous government entities managed the lands with no single vision, according to Luo Peng, of the Chengdu Institute of Biology at the Chinese Academy of Sciences and an author of the plan.

“Local governments, which have local-development priorities, sometimes had too much say over the natural [areas],” he said in an email. “Coordination was not always effective.” (Learn about the dramatic measures taken to get pandas to mate.)

Now, management of the park will be centralized under the new National Forestry and Grassland Administration, and protected-area designations will be consolidated into fewer categories.

According to Luo Peng, the park will be set up around core protected areas that prohibit farming, grazing, mining, logging, tourism, or other development. (Read why it’s so difficult to photograph pandas.)

Fewer restrictions will apply to “general control zones,” which will allow tourism and some farming and other local activities—but only after “rigorous evaluation for environmental impacts,” he says.

But Brody notes some proposals for tourism development, such as a railway through the Wolong Nature Reserve, “may only compound conservation and resource management challenges.”

For each new large-scale tourism initiative, experts “need to examine if it provides a direct benefit to improving habitat for wild pandas,” and if it brings real benefits to local communities, says Brody.

Historically, local people have not often benefited from tourism, and by some calculations, as many as 170,000 people live within or near the new park boundaries, according to the Associated Press.

And while a person’s decision to move appears to be voluntary so far, the Chinese government has a long history of relocating citizens for conservation or development projects.

Jianguo “Jack” Liu of Michigan State University—whose research on the human impact on panda habitat is helping inform park planners—says the government is providing financial incentives, like paid college tuition, to people living in affected regions as a way to encourage “natural relocation.”

The approach “has [already] been very successful,” with many youths leaving rural areas for college, technical training, or jobs in cities, he says.

For those who don’t want to go, however, “it is critical that villagers get the opportunity to stay on their ancestral lands,” says Brody.

He suggests the government could train and employ those citizens to restore degraded panda habitat, replacing exotic-tree plantations with native flora, for example.

A time for national parks

China already has hundreds thousands of protected areas covering about 18 percent of its land surface, but critics say many have lacked proper planning at inception and fail to truly protect biodiversity.

That’s why the panda park is one piece of a broader effort to create a national park system in China, modeled in part on the U.S. national parks system.

After President Xi Jinping announced such intentions in December 2013, Chinese delegations visited Yellowstone, Yosemite, and other U.S. parks to kick start their own planning, says Rose Niu, chief conservation officer of the Paulson Institute, a think-tank dedicated to U.S.-China relations that hosted the U.S. park visits.

Now, eleven new parks (including the panda park) are in their pilot phase, and as many as a hundred others, plus a dozen marine and coastal protected areas, are in consideration, according to Niu.

Niu agrees, noting Chinese policy has shifted in that “local governments still may prioritize economic growth, but higher up, conservation is winning over development.”

And the guiding principle, she says, “is to engage with local communities and let them benefit from the changing conservation landscape.”

“It’s significant that for [the panda park], the government is specifically targeting habitat rather than focusing solely on the animals,” he says. “That’s why this park’s mission really matters.”