Centuries of storytelling paint the four species of hyena as laughing, demonic scavengers. It’s time to set the record straight.

The most successful hunter in all of Africa is intelligent and loving, forming intricate social bonds that rival those of primates. Cubs of the alpha female inherit the rank immediately below hers, similar to a monarchy.

The king of the jungle, you might say? Nope. We’re talking about the hyena.

Long misunderstood as dim-witted, gluttonous scavengers with a demonic laugh, the hyena has a “serious PR crisis on its paws,” says Arjun Dheer, a Ph.D. student at the Leibniz Institute for Zoo and Wildlife Research in Germany, who studies spotted hyenas in Tanzania’s Ngorongoro Crater.

“The visceral reaction any time I tell someone I’m working with hyenas is, Ew gross, why?”

That’s because centuries of literature and traditional folklore—often featuring stories of witchcraft, grave-digging, and sexual deviance—have cemented a “deep-rooted disgust for the hyena in the human psyche,” he says.

Aristotle described the hyena as “exceedingly fond of putrefied flesh.” Hemingway labeled the animal a “hermaphroditic self-eating devourer of the dead.” And Roosevelt called it a “singular mixture of abject cowardice and the utmost ferocity,” according to a 1995 study on the hyena’s status throughout history. Pliny the Elder, an ancient Roman author, wrote that hyenas can magically freeze other animals in place.

With such an unsavory history, it’s no surprise pop culture depictions of hyenas have followed suit. The all-new movie, The Lion King, which Disney releases July 19, again portrays a trio of spotted hyenas as evil sidekicks of the villain Scar. (The Walt Disney Company is majority owner of National Geographic Partners.)

Mostly, it’s fear and lack of understanding of these hyenas, coupled with their unusual appearance and scavenging tendencies, that have spawned so many negative stereotypes, says Dheer.

But, he says, it’s time to set the record straight.

Groups of hyenas, called clans, range widely in their preferred habitat. The four species are spread through much of Africa and into parts of Asia. 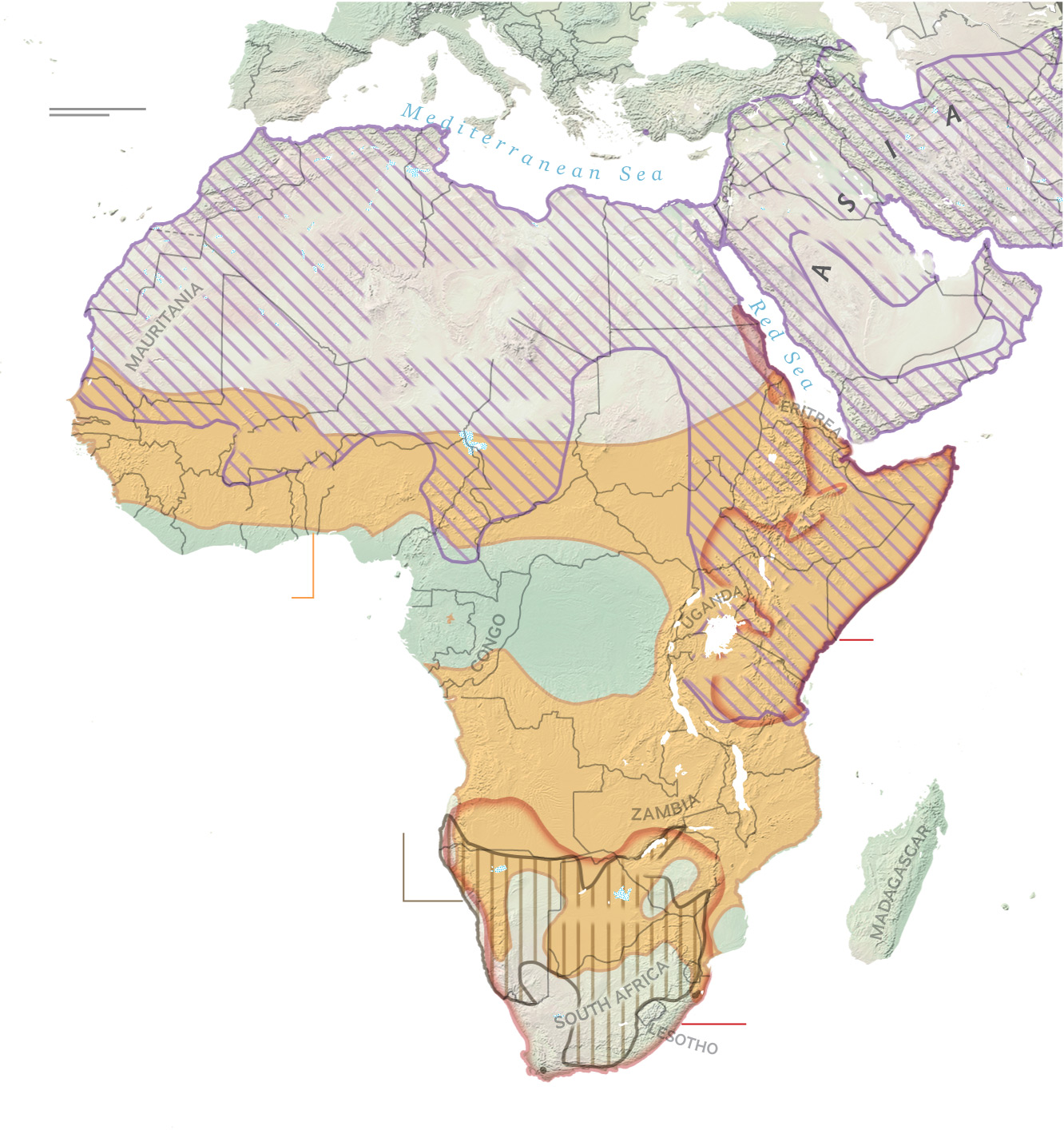 Groups of hyenas, called clans, range widely in their preferred habitat. The four species are spread through much of Africa and into parts of Asia.

The Lion King’s hyena trio, Shenzi, Banzai, and Ed, lurk in the shadows of the elephant graveyard. Ed is dim-witted, with unfocused eyes and a floppy tongue, and he gnaws on his own flesh. Under Scar’s leadership, the hyenas contribute to the collapse of the entire Pride Rock ecosystem.

In reality, these apex predators are critical to controlling prey populations and preventing the spread of disease, particularly by eating every last bit of an animal, Dheer says.

Spotted and brown hyenas live in tight-knit clans that are led by an alpha—often a female—and include lower-ranking females, males, and young. Clan size depends mostly on prey availability, ranging from 10 members in some desert-dwelling clans to around 120 animals at the resource-rich Ngorongoro and Kenya’s Masai Mara National Reserve, Dheer says.

Such large and complicated groups make spotted hyenas “the most socially complex carnivores in the world,” Dheer adds. (Watch wild dogs and hyenas face off after a kill.)

“You couldn’t maintain all these social bonds if you weren’t intelligent,” adds Ingrid Wiesel, founder of the Brown Hyena Research Project, who studies brown hyenas in coastal Namibia.

For instance, after she captured and radio-collared a brown hyena at her study site, it took her another six years to catch another.

“They outsmart you every time,” she says.

Vocalizations keep hyena societies intact: Their classic whoop serves to recruit more hyenas during a fight with lions, advertise a male’s fitness, or simply communicate with other hyenas about location. Then there’s the oft-misunderstood laugh, or giggle, which is unique to the spotted hyena.

For centuries, authors have described this sound as deceitful or mischievous. “I will laugh like a hyena, and that when thou art inclined to sleep,” Shakespeare writes in As You Like It.

In truth, it’s not a happy noise: A lower-ranking animal makes this laughing-like sound when it’s upset or stressed, Dheer says.

Myth: Hyenas are only scavengers.

As the story line goes, “the lion is the king, and the hyena is a skulking, nasty, dirty thing because it’s a scavenger,” says Christine Drea, an evolutionary anthropologist at Duke University who has studied spotted hyenas.

This myth refuses to die, she says, “even with the evidence to the contrary staring everyone in the face.”

The truth? Hyenas are excellent hunters whose spoils are more likely to be stolen by lions than the other way around. In the Serengeti in the 1970s, zoologist Hans Kruuk found that when spotted hyenas and lion share a carcass, hyenas were responsible for the kill 53 percent of the time. (See 14 incredible photos of African predators in action.)

Spotted hyenas can take down buffalo and baby elephants, hunting alone or in groups—a “flexibility that gives them an advantage over their competitors,” Dheer says.

That’s not to say that hyenas will ignore available food, Drea notes: “Any self-respecting carnivore would scavenge if given the opportunity.”

And they’re exceptional at it. Sledgehammer-like jaws shatter bones, while highly acidic stomachs break down the shards.

In the meager deserts of southern Namibia, brown hyenas maintain home ranges of up to 1,150 square miles. An animal will walk an average of 15 miles a night in search of a meal, often baby seals, according to Wiesel.

Such endurance is due in part to their streamlined body shape. Stubby hind legs increase energy efficiency, allowing the animals to lope easily across the ground. Hyena also have big, strong lungs and hearts as well as wide nostrils that facilitate oxygen exchange.

The Kaguru people of Tanzania believe hyenas dig up the graves of the dead, which, according to their beliefs, is why they smell bad. In reality, hyenas actually don’t have much of a smell, say Dheer and Wiesel.

“You want to talk about a stinky animal,” Dheer says with a laugh, “the African wild dog rolls in its own poop.” (See more amazing photos of African wildlife.)

Female hyenas are stellar mothers, investing more time in their cubs than most carnivores. Not only do they nurse cubs on extremely calcium-rich milk for two years, moms wrestle and play with their offspring for hours at a time—another sophisticated, primate-like behavior. (See more pictures of animal moms and babies.)

However, spotted hyena females are often mistaken for males. They have genitals that resemble males’. When two hyenas—male or female—greet, the higher-ranking animal will sniff the lower-ranking animal’s genitals to reinforce bonds and lower stress levels. Females also urinate, mate, and give birth through this pseudopenis.

It’s this physical trait that has particularly harmed the hyena’s public persona. In Physiologus, a Christian text from the second century A.D., the hyena is said to alternate between male and female, and thus “is unclean because it has two natures,” according to the 1995 study.

Truth: Hyenas are vulnerable to extinction.

Because of habitat loss and widespread hunting, striped and brown hyenas are classified as near-threatened by the International Union for Conservation of Nature, the body that sets the conservation status of species.

And though the aardwolf and spotted hyena are listed of least concern, “I am concerned,” Dheer says.

Spotted hyenas are locally extinct throughout much of South Africa, as well as West and central Africa. Persecuted by farmers and poachers, their numbers seem to be declining outside of protected areas, according to Dheer.

“I’m not super optimistic about their future, especially considering their negative public perception,” he says.

That’s why he and his colleagues are working hard to boost hyenas’ profile, especially on social media.

“If non-scientists could speak for these animals,” says Wiesel, “that would do a lot more for the public to understand they’re not so bad.”

Africa’s lion population has dropped from 200,000 to 20,000 in the past century. Join Disney in supporting the Wildlife Conservation Network’s Lion Recovery Fund in a global campaign to help double the population by 2050.