These surreal jarred fish tell an urgent story of extinction

A biologist's unusual “fish bunker” of preserved aquatic life shows how humanity has pushed some species to their doom.

These surreal jarred fish tell an urgent story of extinction

A biologist's unusual “fish bunker” of preserved aquatic life shows how humanity has pushed some species to their doom.

This story appears in the October 2019 issue of National Geographic magazine.

It is a horror movie director’s dream of a natural history collection. You find it by driving 10 miles southeast of New Orleans, to a piece of land that is part swamp, part forest, on a bend in the Mississippi River, down a dirt track named Wild Boar Road. Alligators and water moccasins live in the tangled woods to the left. On the right stands ammunition bunker number A3, its flanks heavily bermed against the danger of explosion, its loading dock cracked and skewed forward by the more reliable detriments of time. 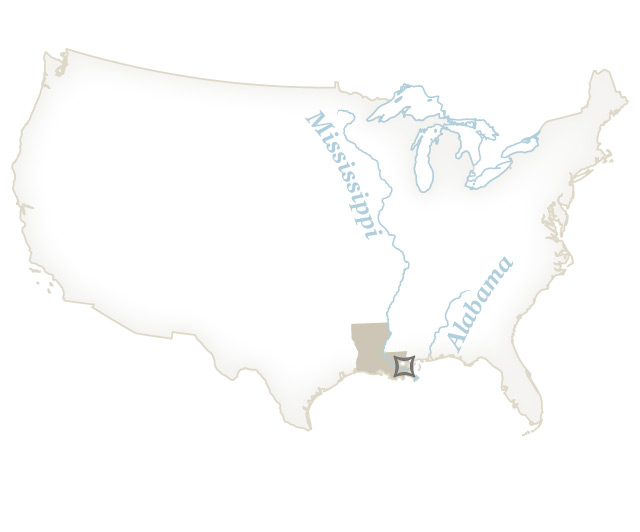 There are 26 such bunkers, widely distributed around the roughly 400-acre property, most of them abandoned. During World War II, U.S. Navy ships stopped here to pick up artillery shells before heading out to sea. Later the Central Intelligence Agency trained Cuban guerrillas on the property for the disastrous Bay of Pigs invasion in 1961.

Tulane University owns the place now, and the visitors tend to be biologists, drawn here by the nearly eight million dead fish housed in bunkers A3 and A15. (Another bunker nearby holds the University of Louisiana Monroe’s fish collection.)

Inside, the fish soak in alcohol, in tightly sealed jars of assorted sizes, lined up on shelves that rise 10 feet high and run 36 feet long, in row after row after row. Some of the specimens are outlandish. A couple dozen paddlefish huddle together in a five-gallon jug with their translucent paddles raised heavenward, looking like congregants at an extraterrestrial prayer meeting. But nine of the 22 rows in the main collection are Cyprinidae, which mostly means minnows. Ordinary is really the guiding aesthetic of the place.

It is the world’s largest fish collection, a title that comes with asterisks.

“It’s actually the largest post-larval collection,” says Justin Mann, the 38-year-old collection manager, who spends much of his time fighting back the mildew that paints and repaints itself across the interior walls. It’s the largest by number of specimens, he adds, not species. In fact, more than a million specimens belong to a single species, Cyprinella venusta. (Yes, it’s a type of minnow.) The collection includes outliers from as far away as Indonesia. But most of the fish here originally were at home in the Southeast United States, from the Gulf Coast of Texas to the Carolinas.

The Tulane collection consisted of just two mounted fish when an ambitious young fish biologist named Royal D. Suttkus arrived in 1950. Suttkus set out to change that, on the principle that you cannot understand the aquatic world unless you can see it and study it, and you are unlikely to protect what you cannot understand. Suttkus was a relentless field biologist, wading hip- and neck-deep in the waters of the region over the next 50 years, pulling one end of a 10-foot-long seine net while a graduate student at the other end tried to keep up.

Other fish biologists often roam from place to place, collecting a little here, a little there, always looking for something new and interesting. Instead, Suttkus, who died in 2009, typically collected from the same sites on the same rivers year after year for decades, often conducting mandatory environmental impact surveys for paper mills and other polluters. The customary practice for fish biologists is to lay out the catch at the end of a run, choose a few fish worth preserving, and set the rest free. The rule for Suttkus, on the contrary, was that everything in his net ended up in a jar.

Other biologists frowned. Overcollecting at the same spot once a year wasn’t likely to damage the population; it just looked bad. One of them wrote a song dubbing Suttkus “the collecting machine.” It included this horror movie–worthy verse:

Hide your pet iguana and your talkin’ cockatoo

And keep a close eye on your children, don’t let them roam too far

Cause the Collecting Machine is on the loose, and he’ll stuff ’em in a jar.

And yet, here’s the thing: Those systematic, take-all methods have turned out to be the enduring strength of the Royal D. Suttkus Fish Collection.

They make it “a window into the past,” without the distortions that tend to creep onto the shelves of more selective museums, says Bernie Kuhajda, an aquatic conservation biologist at the Tennessee Aquarium in Chattanooga. Most fish researchers, “if they’re going to take only 10 fish, are going to take the larger ones,” he says, “so they can count scales” and the spiny rays in the fins, the traits that enable them to identify species correctly. “With Suttkus taking everything, you know what the actual age structure was at that time and place”—for example, whether it included all the age groups for a healthy population—“which is useful.”

Useful how? That’s a question college administrators now often ask, with an eye to more glamorous ways of allocating budgets. The University of Louisiana Monroe recently tried to evict its fish collection on two days’ notice because administrators were keen to build a better sports facility. A consortium of institutions, including Tulane, came to the rescue, adding another 11 rows of specimens to one of the Suttkus bunkers (pending final distribution).

The collection is useful because it’s a window into a particularly interesting past. Suttkus collected when rivers were still being dammed for hydropower and navigation. Pollution was largely unregulated. After a chemical factory opened in northern Alabama, says John Caruso, a Suttkus graduate student in the 1970s, “I remember pulling sunfish out of the river, and blood just came pouring out of their gills.”

Now biologists studying how rampant 20th-century development changed the Southeast turn to the Suttkus collection to find out. They turn to it virtually, as well as in person, because the National Science Foundation helped make the collection one of the first natural history museums to put the data and location for every specimen online.

One such study led by researchers from the U.S. Geological Survey looked at the Alabama River, where regular visits by Suttkus recorded a time-lapse of loss, with the number of species dwindling by almost two-thirds from the 1960s to the end of the century. During that period, dams completed the transformation of the old free-flowing river into a system of 16 reservoirs. Agricultural runoff, urbanization, and wastewater from sewage plants and surface mines also did their damage.

Among the victims were the Alabama sturgeon, now blocked by dams from its ancient migratory routes, and the Gulf sturgeon, now largely vanished from the river.

The Alabama shad, frecklebelly madtom, and crystal darter are also mostly gone, and minnows like the Mobile chub and the fluvial shiner no longer appear at sites where Suttkus commonly caught them. By 2005, 10 of the river’s fish species were listed by the federal government as threatened or endangered, with experts deeming at least 28 more species vulnerable, or worse. Without corrective action, the study warned, “fish species extinctions appear inevitable.”

The real horror story, it turns out, isn’t the Suttkus collection, but what it reveals about human destruction of the world around us.