What it takes to protect gorillas from Ebola

Spread of the disease among endangered eastern gorillas could be catastrophic for their survival.

It’s possible that as much as a third of the global Western lowland gorilla population, a critically endangered subspecies, was wiped out by Ebola in the early 2000s, experts say. Now mountain gorillas and Grauer’s gorillas may be at risk too.

While the current outbreak of the viral hemorrhagic fever in eastern Democratic Republic of Congo (DRC) hasn’t spilled over to great apes, conservation groups are on high alert. When news came in August 2018 that a case of the deadly virus had been confirmed in the DRC’s North Kivu Province, conservation groups stepped up observation and monitoring efforts of the region’s mountain and Grauer’s gorillas.

“Once Ebola has been identified within a local gorilla population, the consequences have always been really catastrophic,” says Peter Walsh, a primate ecologist who worked on developing an Ebola vaccine for primates at the University of Cambridge. (Read more: What is Ebola?)

Protecting the gorillas’ safety is a dangerous undertaking in its own right. Virunga National Park, in eastern DRC, is home to one of the largest populations of remaining mountain gorillas. More than 170 rangers have been killed in the line of duty in the past 20 years, including one on Thursday, at the hands of armed rebel groups and local militias. (Go inside the fight to save Virunga, one of the world’s most dangerous parks.)

In eastern DRC, the human toll of Ebola continues to mount. As of November 5, the World Health Organization confirmed 2,185 deaths since the outbreak was declared 15 months ago. Vaccine breakthroughs, advances in awareness, and improved containment protocol mean the mortality rate for humans has improved drastically since the first recorded outbreak in 1976: It now sits at around 50 percent.

Previous outbreaks have devastated populations of non-human primates, a group that includes chimpanzees, monkeys, and gorillas. While hard data is scarce, the documented toll on gorilla populations has been particularly alarming. 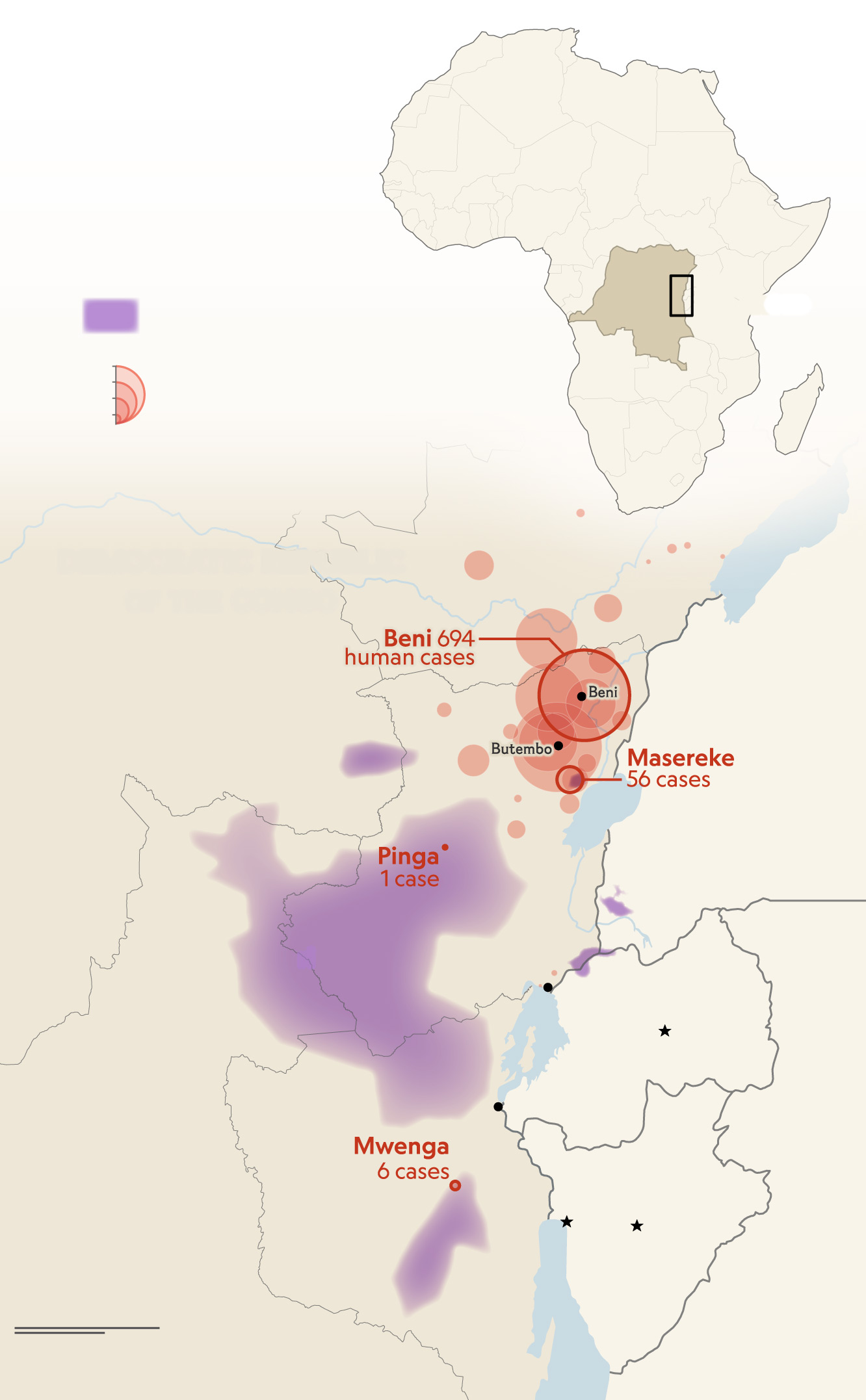 cases of ebola in humans

“The impact is very ‘all or none’: Patches with something like 90 to 95 percent mortality can extend over hundreds or even thousands of square kilometers,” says Walsh.

During an outbreak of the Zaire ebolavirus strain in 2002 and 2003 along the Congo-Gabon border, 130 of 143 gorillas that researchers were observing at the time disappeared. In another outbreak slightly further south during the same period, 91 of 95 gorillas disappeared. Many of the carcasses were discovered later and tested positive for the virus.

Walsh says the spread of the pathogen within gorilla populations appears to roughly mimic its progression among humans—the major differences being population density and the capacity for medical interventions. Gorillas can't explain their symptoms, much less quarantine themselves, resulting in a far higher mortality rate.

“We don’t know exactly what [an Ebola] infection looks like in a wild great ape, because past outbreaks that have affected wild great apes in West Africa have, unfortunately, been described ex post facto, after mortalities have occurred,” says Amy Bond, a spokesperson for Gorilla Doctors, a nonprofit veterinary organization that protects and cares for gorillas in DRC, Rwanda, and Uganda. (Read more: Meet the vets risking their lives to treat wild gorillas.)

Ebola is one more threat among a litany of others that gorillas in the region face. Mountain gorillas and Grauer’s gorillas, both subspecies of the eastern gorilla, number about a thousand and 3,800 respectively, according to the International Union for the Conservation of Nature. Habitat loss has taken a heavy toll, with agriculture, illegal mining, and forest destruction to make charcoal degrading and breaking up their forests. Gorillas often get caught in snares laid out to trap other animals for bushmeat. Climate change also poses a threat: While gorillas are adaptive, moving to higher elevations to adapt to warmer temperatures, those areas are densely populated with little forest remaining.

In Virunga and Kahuzi-Biega National Parks, veterinarians are monitoring gorillas for signs of illness, Bond said in an email. About 60 percent of the mountain gorillas left in the wild are habituated to the presence of humans from seeing conservation staff, tourists, and researchers regularly, making them easier to monitor.

“Any aberration from normal is noted,” she wrote, adding that obvious injury, lameness, difficulty breathing, coughing, eye or nose discharge, diarrhea, lethargy, or not eating could all be symptoms of disease in gorillas.

If a gorilla shows signs of illness, Bond says that Gorilla Doctors would report the case to the park authorities immediately, and they’d make a joint decision whether to intervene. A spokesperson for Virunga National Park said in an email that the gorilla family would be isolated and put under 24/7 veterinary care and surveillance. In order to protect the safety of personnel, only those vaccinated against the virus would be involved.

Because of this close monitoring, any outbreak would likely be identified quickly compared to an outbreak in unhabituated, wild populations. The fact that these gorillas are not afraid of people, however, puts them uniquely at risk of exposure through direct contact with bodily fluids.

Gorilla Doctors and park officials have boosted efforts to ensure forest workers and their families are aware of how zoonotic disease transmission works, spreading an infection from humans to animals or vice versa. There are additional sanitation measures—which were strict to begin with, because gorillas can catch all kinds of illnesses from humans—and prohibitions on staff going to or through areas with reported Ebola cases, the Virunga spokesperson said.

Another way the disease could spread through a gorilla population is through mourning, which is also true for humans. While scientists can’t say with certainty that gorillas truly mourn their dead, the behavior some gorillas have shown looks a lot like it. Gorillas have been known to touch, groom, and even lick the bodies of other gorillas.

Fabian Leendertz, a world-renowned expert on primate diseases and head of the Leendertz Lab in Berlin, points to the human dynamics at play in this outbreak as a potential cross-species transmission threat. With mistrust of health authorities rife, the risk of infected people hiding in areas populated by non-human primates is higher, he says.

And because the gorilla’s social structure revolves around the silverback, the alpha male, in the event that he becomes sick or dies, the females would head off in search of new companions—making them possible vectors as well.

Walsh believes one of the best ways to protect gorillas from Ebola is proactive vaccination, something he’s called for repeatedly. He says Ebola poses an existential threat to gorilla populations, along with more common respiratory diseases, to which primates are especially susceptible.

“The default perception is that [vaccination is] dangerous and expensive and technically not possible, and those are factually wrong,” he says, noting, for example, that millions of free-ranging animals have been vaccinated against rabies, and that habituated western gorillas vaccinated against measles showed no ill effects. (Read more about the challenges Walsh has faced in trying to develop an Ebola vaccine for non-human primates.)

While Leendertz doesn’t see proactive vaccination as a practical or realistic measure for all gorilla species, he says the mountain gorilla could be uniquely suited to it.

“A large proportion [of the mountain gorilla population] is habituated, which means you can approach them. It would be quite easy to dart them with the Ebola vaccine," Leendertz says. “The problem is once you have [Ebola] in the gorilla population, it’s too late. The vaccine needs some time to become activated.”