One of world's rarest dolphins rebounding in Pakistan

People rescue two Indus river dolphins in the Kirthar Canal, near Sukkur. Many of the animals get stuck in pools or canals due to widespread diversion dams called barrages.

In a secluded pocket of Pakistan’s Lab-e-Mehran park, the smooth waters of the Indus River break into circular ripples, and the head of a pale gray dolphin appears. The animal lingers briefly before diving back into the water, its dorsal fin gleaming in the sun.

This quiet riverside park in the southern city of Sukkur, popular with families out for a stroll, is also home to the endangered Indus River dolphin, one of only four freshwater dolphin species left on Earth.

But a dam at the western end of the park restricts their ability to travel freely during the monsoon season, a crucial part of their life cycle.

It’s a similar story throughout Pakistan: Widespread construction of diversion dams called barrages have effectively destroyed the species’ habitat. The barrages were built in the mid-20th century to control flooding and provide irrigation, and in some cases have been repurposed for power plants. Now, they’ve not only cut off the dolphins’ ability to migrate; their diversions also can lead to dangerously low water levels. (Explore our beautiful graphic of the Indus River, a lifeline for millions.)

Once, the Indus dolphin swam across the Indus River and all of its tributaries, from the Indus delta near the Arabian Sea to the snowcapped Himalaya. Today, the 200-pound cetacean only occupies 20 percent of its original range.

The remaining Indus dolphins are concentrated mostly in the Pakistani province of Sindh, in a 410-mile stretch of river between the Guddu and Kotri dams. Engro, an energy company that works with the thermal power plant connected to Guddu dam, did not respond to requests for comment about the dam’s impacts on the species.

Beyond dams, water pollution and industrial waste dumped into the Indus pose the gravest long-term threat to the dolphins. Studies have found DDT and other pesticides in the animals’ tissue, according to Uzma Khan, Asia coordinator for WWF’s River Dolphins Initiative.

However, a rigorous government conservation program has educated local communities, rescued stranded dolphins, and is steadily increasing their numbers, Khan says. There are now 1,987 Indus dolphins in Pakistan, according to the most recent WWF survey, up from 132 animals in 1972. Another small population of at least seven animals live in India’s Beas River, an Indus tributary.

“If you go downstream from the Guddu [barrage], and you keep sailing, there comes a point where you see dolphins everywhere around you,” Khan says. “It’s overwhelming because they’re everywhere.”

At the same time, she says, “it’s a situation which can be challenging, because all these dolphins are just in one stretch of the Indus River.”

Throughout the 20th century, the wide-

called barrages fragmented the range of

between local and international conserva-

tion groups brought the species from a

“HABITAT FRAGMENTATION AND SPECIES EXTIRPATION IN 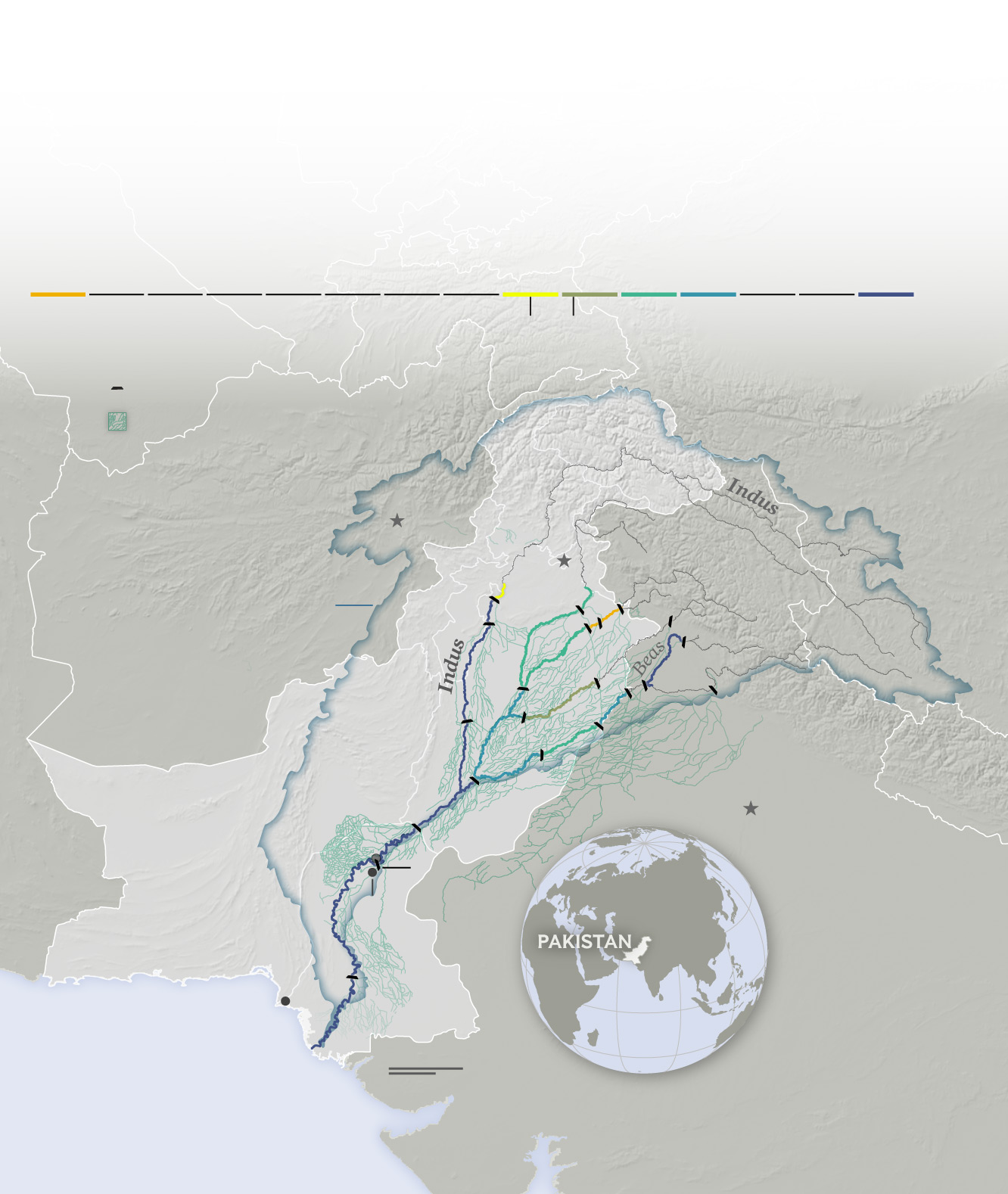 Throughout the 20th century, the widespread construction of diversion dams

between local and international conservation groups brought the species from

“A friend of humans”

Locally known as bhulan in the Urdu and Sindhi languages, the Indus dolphin “has been in the Indus for thousands of years, and is a mark of the Harappa civilization,” says Mir Akhtar Talpur, a field officer for Sindh Wildlife Department, a government agency.

The Bronze Age civilization, which blossomed in the Indus River valley, is known for its urban planning and advanced drainage systems. Modern peoples of the Sindh and Punjab Provinces are considered the Harappa’s direct descendants, and value the dolphin as part of their heritage.

Fishermen in these provinces tell an origin story for the species. In the legend, when a woman offers butter and milk to a mystic patron of the river, the waters part and she safely crosses to the other side. But once, she fails to make an acceptable offering—and the river spirit transforms her into a dolphin. (See photos of river dolphins around the world.)

For fisherman Gul Mohammed Mirbar, the dolphin is a lifelong companion; he was 10 years old when he first saw one. On a sunny afternoon in February, he rows his wooden boat across the river at Lab-e-Mehran park, where he earns money giving boat rides to tourists and park visitors hoping to catch a glimpse of the rare dolphin.

As the water softly laps against the rocky riverbank, a pink dolphin surfaces with a splash, then disappears beneath the water.

Though Mirbar considers dolphins part of the environment, he and fellow fishermen also regard the dolphins as competitors that eat the very fish that are the men’s livelihood.

“You have to really put in effort [in fishing], or else you can’t catch up with the dolphin. That’s how fast she is,” Mirbar says, adding that the dolphins target large and small fish alike.

Until hunting was banned in the 1970s, some fishing communities hunted the dolphin for food or for blubber that they mixed with oil to coat their boats. The WWF reports that each year in the area, at least one dolphin dies when it’s accidentally trapped in fishing nets.

In general, “the dolphin is a friend of humans,” says Khadim Hussain, a representative of a fishermen advocacy organization in Taunsa, a city in Punjab Province. “And it doesn’t pose any harm to fisherfolk. When the dolphin hears the sound of fishermen’s engines on their small boats, it approaches and swims with them.” (Read about dolphins in Brazil who help fishermen make their catch.)

An animal suited for the river

The dolphin has evolved to thrive in the Indus. Its colors—brown, a range of grays, or rarely, a dusky pink—help the animal blend into the sediment-laden river. And it’s nearly blind, as sight is unnecessary in the river’s murky waters. (Read about the first new species of river dolphin found in a century.)

The animal relies largely on an internal sonar system that bounces sound waves off objects to find prey, navigate the river, and communicate with other dolphins. The sonar is so advanced that it can sense the difference between a dead or living fish.

The dolphin’s long beak easily snaps up fish and other prey. On its sturdy body, a small dorsal fin maintains stability as it swims.

The Indus River dolphin is one of just two species known to lie on its side and flap its tail, a behavior called side-swimming. The maneuver allows the dolphin to move between shallow pools of water in the dry season—but it can’t help the animal cope with the Indus River’s dams.

Before dams fragmented the species’ habitat, the dolphins would swim upstream to tributaries during the monsoon and return to the Indus in the dry season.

Some dolphins can still move through dams if its gates are open—particularly if the animal is young or small—but then they often get trapped in irrigation canals, shallow pools, deep ponds, and sometimes even fields, where they can starve and overheat to death. (See videos revealing the power of dams—and dam removal.)

A dolphin calf had swum out of the river and beached in a field in Faiz Ganj Wah, more than 120 miles from Sukkur. Hamid Khan and his team placed the animal in his car, spraying it with water to keep it hydrated as they sped through traffic to release it back into the river. While the rescue was successful, it's unknown whether the animal survived.

The rescue process isn’t easy. For one, these marine mammals are very sensitive to loud noises and human presence, and can suffer from health problems such as high blood pressure when being evacuated. (Learn about the difficulties involved in rescuing wild animals.)

In 2019, WWF-Pakistan and Sindh Wildlife Department rescued a female Indus River dolphin from Dadu canal, in the Larkana district, and transported her via ambulance back to the river.

“In wildlife conservation, problems arise very suddenly. You have to give instant relief and make a decision in that moment on how you’ll resolve things,” he says.

What the rescuers lack in resources, they make up for in dedication.

Nazir Mirani, the son of a fisherman, has worked with Sindh Wildlife for 30 years; he has bite marks on his hands from past rescues. Mirani is the third generation in his family to help in conserving dolphins, offering the agency advice and knowledge from his years on the water.

“For generations, we’ve been living near the river and sailing in boats. We fish, and we take care of the dolphin,” says Mirani, as he sits in the shade of a tree and looks out at the sun-streaked river.

“In the past, some people used to eat the dolphin. My father told them, Don’t eat the dolphin, because this is an innocent animal, and it’s the beauty of the river.”

Much about the Indus dolphin remains shrouded in mystery, including this: What happens to rescued dolphins once they’re set free in the river? Do calves find their mothers, for instance? (See beautiful underwater photos of freshwater animals.)

WWF has proposed putting satellite tags on dolphins to track their movements, learn more about their biology, and inform conservation efforts. “Every rescued animal needs to be tagged,” Uzma Khan says. “And we need to know, how many dolphins are dying?”

Another technology that could help conserve dolphins is planting “pingers” near the openings to canals. The devices make a ting ting sound, inaudible to humans, that dolphins avoid.

Pingers usually are used to warn dolphins away from fishing nets, says Uzma Khan, “but we want to test them near canals to see if they stop dolphins from swimming into them.”

For rescuers like Mirani, saving the Indus River dolphin is a civic responsibility. He remembers the gharial, a crocodile that once lived in the Indus but is now locally extinct..He doesn’t want the dolphin to suffer the same fate.

If that happens, he asks, “What will our children see?”