Wild landscapes of the Tibetan Plateau dominate Sanjiangyuan National Park, which was completed in May. China plans to complete 10 new national parks—many of which unite locally managed protected areas—by the end of 2020.

Driving along a misty road last year, hemmed in by a steep forested ravine, I’m startled to see a 10-foot-tall cartoon panda mural suddenly loom ahead, resembling a scene from the film Kung Fu Panda. Nearby, a spotless concrete walkway leads to a new community center in the heart of China’s new Giant Panda National Park.

Such tourism infrastructure is popping up among the high-elevation bamboo forests of Sichuan Province, where the new panda park is scheduled for completion by year’s end. It’s part of a sprawling new national park system of 10 pilot parks, spread across 12 provinces, whose goal is to protect habitats of endangered species. These animals range from the Siberian tiger on the Russian border to the world’s last 30 Hainan black crested gibbons in southern China’s tropical rainforest. (Read more about the new panda park.)

By uniting hundreds of protected areas managed by various municipalities and provinces, the new system’s goal is to streamline and strengthen conservation under the central authority of the new National Forestry and Grassland Administration.

Already, these test parks—which should be officially approved by the end of 2020—cover an area two-thirds the size of the U.S. national park system. The largest, Sanjiangyuan National Park in Qinghai Province, is about the size of Mississippi.

Although China has experienced an economic slowdown amid the COVID-19 pandemic, the country will likely stick to its goal of completing the parks by year’s end, says Rose Niu, who has been working to create national parks in China since 1997 and is now chief conservation officer at the Paulson Institute, a Chicago-based think tank focused on U.S.-China relations.

The Chinese government aims to protect

giant pandas by establishing a 10,476

creating a corridor for the bears to roam. 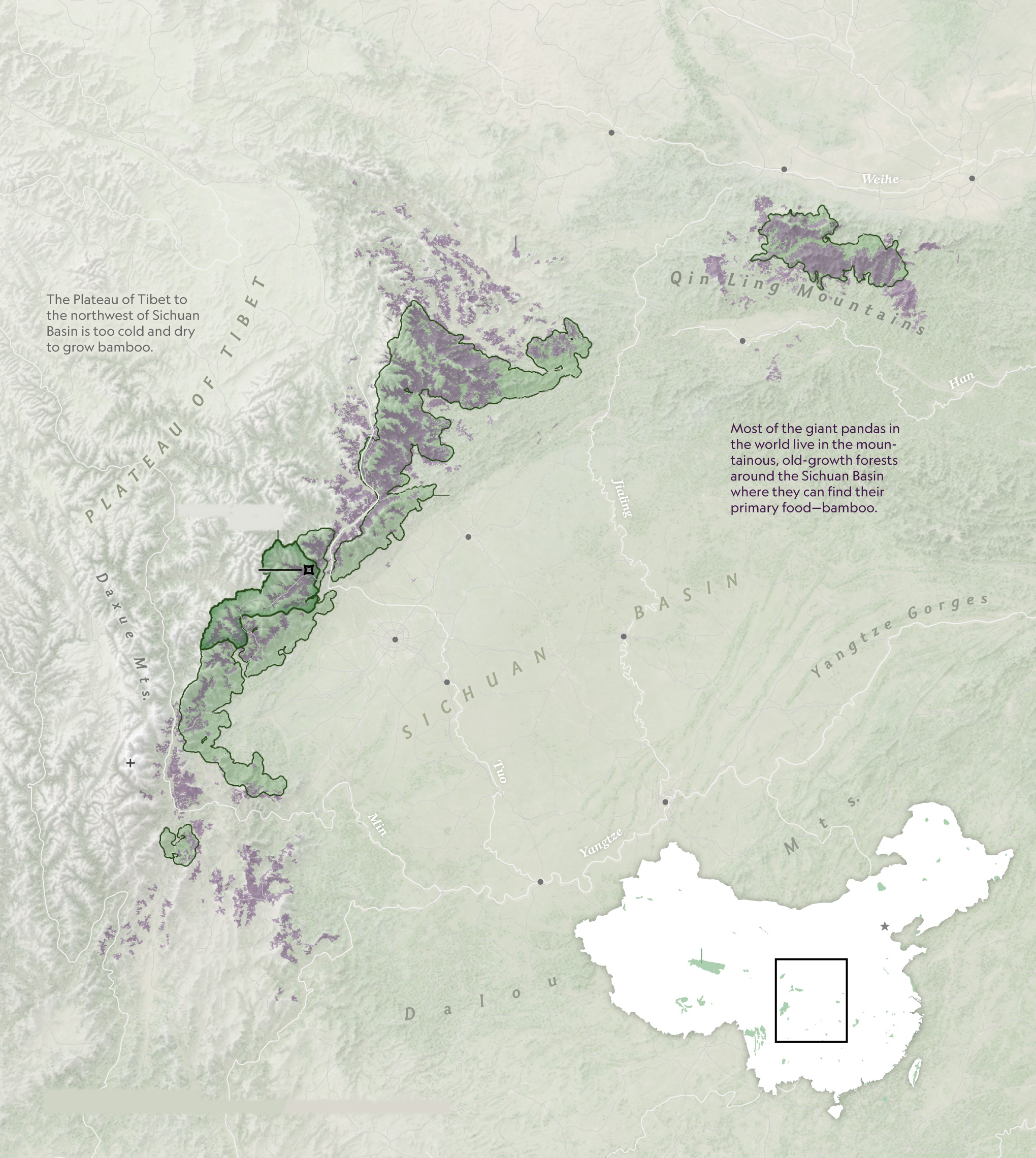 The Chinese government aims to protect giant pandas by

creating a corridor for the pandas to roam.

While the pandemic may hinder investment more broadly in conservation, “the establishment of national parks is a top priority for the Chinese government,” Niu says. Last August, when China held its fist national park conference, Xi Jinping issued a rare public letter of support for the project.

With such an ambitious plan, there are bound to be hurdles—and among the most formidable are working with local people and balancing the need for tourism with wildlife conservation.

For instance, China has only offered voluntary relocation to a fraction of the 652,600 people living inside the 10 parks, hoping instead that existing communities will welcome ecotourism and embrace the new network of protected areas, which is modeled in part on the U.S.’s national park system.

But 99 percent of China’s impoverished counties are within 60 miles of preexisting nature reserves—the backbones of the new national parks. For this vision to succeed, so must the people who rely on the land, says Li Xinrui, who helps manage a community cooperative within the Guanba Community Nature Reserve.

“Whether or not your protection efforts are effective doesn’t depend upon how well a nature reserve or national park is created, but on whether the livelihoods of the locals have changed,” Li says. “When the common people can have good income and lives, that’s when protection efforts will be effective in conserving nature.”

That often involves compromise. Driving through Wanglang National Nature Reserve, one of the first nature reserves China set up for panda protection in the 1960s, with Li, he pointed out cows milling around gnarled trees on either side of the road.

Grazing inside the mountainous reserve—now part of the panda park—is technically illegal, he says, and domestic animals have already damaged up to a third of Wanglang’s panda habitat. But considering the importance of livestock to local communities, herders and government reached a delicate truce. Often, local officials turn a blind eye to the activity, as long as it is done in moderation, Li says.

But there’s still a long way to go.

For one, the government has not announced a plan to create a backcountry camping and permitting system, similar to U.S. parks, that would regulate how people enjoy nature.

Jennifer Turner, director of the China Environment Forum at the Wilson Center, a think tank based in Washington, D.C., adds “there are not even immediate plans to have national park rangers.” Some local governments are hiring rangers, but there is no formal structure and training across the different pilot projects, she notes.

What’s more, ecotourism—which is defined as tourism that benefits both locals and their environment—only exists in a fifth of China’s nature reserves.

That became clear, when, on patrol with newly hired rangers in Shennongjia National Park in Hubei Province in 2019, we stopped at the wooden shack of a local honey farmer, an occupation encouraged by the government as ecologically friendly. (See beautiful photos of China’s countryside.)

He invited us in for lunch: A steaming pork belly and vegetable hotpot served with pickled string beans and spicy cucumber. We passed a jar of honey around for dessert, dipping our chopsticks straight into the golden honeycomb as the farmer proudly told us he had already sold out his stock for the summer.

Relaxing after the meal, I was floored when the farmer told me I was the first foreigner he had heard of in the valley for decades.

Take the remote Tibetan village Angsai, which lies on the banks of the upper Mekong River within Sanjiangyuan National Park. Since 2018, the village has run a community-led tourism program that benefits both locals and snow leopards, the region’s main tourist draw.

For $43 a day, visitors can stay with local Tibetan families, who act as guides to spot these rare “ghost cats” in the wild. About 75 percent of visitors who stay at least three days see the feline, according to Terry Townshend, a consultant with Shan Shui Conservation Center, one of China’s largest conservation nonprofits, and an advisor for the Paulson Institute.

“The community has made all the major decisions, and 100 percent of the revenue stays in the community,” Townshend says. “It’s been incredibly successful.”

In 2019, Angsai became the first community tourism franchise in a pilot park to be approved by the federal government, he adds. “It was showcased as a way of doing tourism in environmentally sensitive places.”

Marc Brody, who has worked in China since 1994, agrees that well-designed ecotourism, such as in Angsai and in Wolong Nature Reserve, home to the Wolong Panda Center, can boost local ecosystems.

“A core mission of China’s national parks is to promote eco-civilization—a mission that can be advanced by involving visitors,” says Brody, a National Geographic Explorer and founder of Panda Mountain, an ecotourism and conservation organization.

Written into the national constitution in 2012, eco-civilization means sustainably balancing the economy and the environment.

“The process of engaging people in habitat restoration is a way for people to see the landscape in a more holistic and interdependent manner,” he says, “and restore hope that we can help save endangered species.”

Yet ill-planned tourism can harm the very environment that people are trying to see.

In 2018, the Chinese Academy of Sciences released a report that some of the pilot parks were using their funding to enhance tourism infrastructure to the detriment of the environment. Remote sensing technology revealed these parks were aggressively expanding roads, power lines, and public buildings that damaged sensitive ecological areas.

Shennongjia National Park is another striking example of altering habitat to promote tourism. In 2011, the local government carved off 200 feet from the 8,000-foot summit to create level space for the airport, which would increase access to the UNESCO heritage site, home to rare species such as the golden snub-nosed monkey and clouded leopard. Flying into the park, I had the unsettling feeling that I was landing in the clouds before I realized the tarmac lies on the flattened peak.

To offset habitat fragmentation created by roads and other development, many pilot parks, such as Shennongjia and Giant Panda, have been creating wildlife corridors to allow animals like giant pandas to move freely through their habitat.

In August, infrared cameras captured a panda inside one of these corridors in Giant Panda National Park, the first such sighting since their construction began in 2002, according to the Chinese news agency Xinhua.

Living in isolated groups is one the biggest threats to giant pandas, which number around 1,800 animals throughout the southwestern provinces of Gansu, Shaanxi, and Sichuan. To that end, the Giant Panda National Park combines 77 protected areas to set aside 70 percent of the giant panda’s total habitat. In 2016 the International Union for Conservation of Nature reclassified the giant panda from “endangered” to “vulnerable.”

While panda populations are improving, those of other at-risk species have not. A study released in August in Nature Ecology & Evolution casts doubt on the “umbrella species” concept that protecting pandas in their native habitat also benefits other key species. Since the 1960s, distribution ranges of the snow leopard, gray wolf, and dhole—a type of wild dog—in giant panda nature reserves have decreased by over 75 percent, the research found. (Read about efforts to reintroduce pandas into the wild.)

The gap in conservation may come from giant pandas requiring a home range of just a few square miles, only 5 to 10 percent the size of the studied carnivores’ home ranges.

Over the phone, Li said he wasn’t surprised.

“Protection was good when they started for famous species like the giant panda,” he says. “But there was no thought to other animals like tigers or leopards that can be aggressive. Besides, the country didn’t have the experience to manage so many aspects.”

Protecting what you love

The experts all agree that though there are some bright spots in China’s new park system, it’s too early to predict how the parks will affect conservation and local livelihoods long-term.

She notes that local governments are funding many of the pilot parks, instead of the national park service, which would have more resources. “Notably many of the parks are in China’s west, where many of them are less wealthy,” she says.

Ultimately, Niu, of the Paulson Institute, hopes the focus on national parks will deepen China’s growing connection between people and nature, particularly among youth.

“If you love a place, then you will want to protect it, right?” she says. “So [by] having more opportunities for Chinese people to visit these parks, I think the general awareness of the Chinese people on conservation issues will be enhanced and support for conservation will be stronger.”