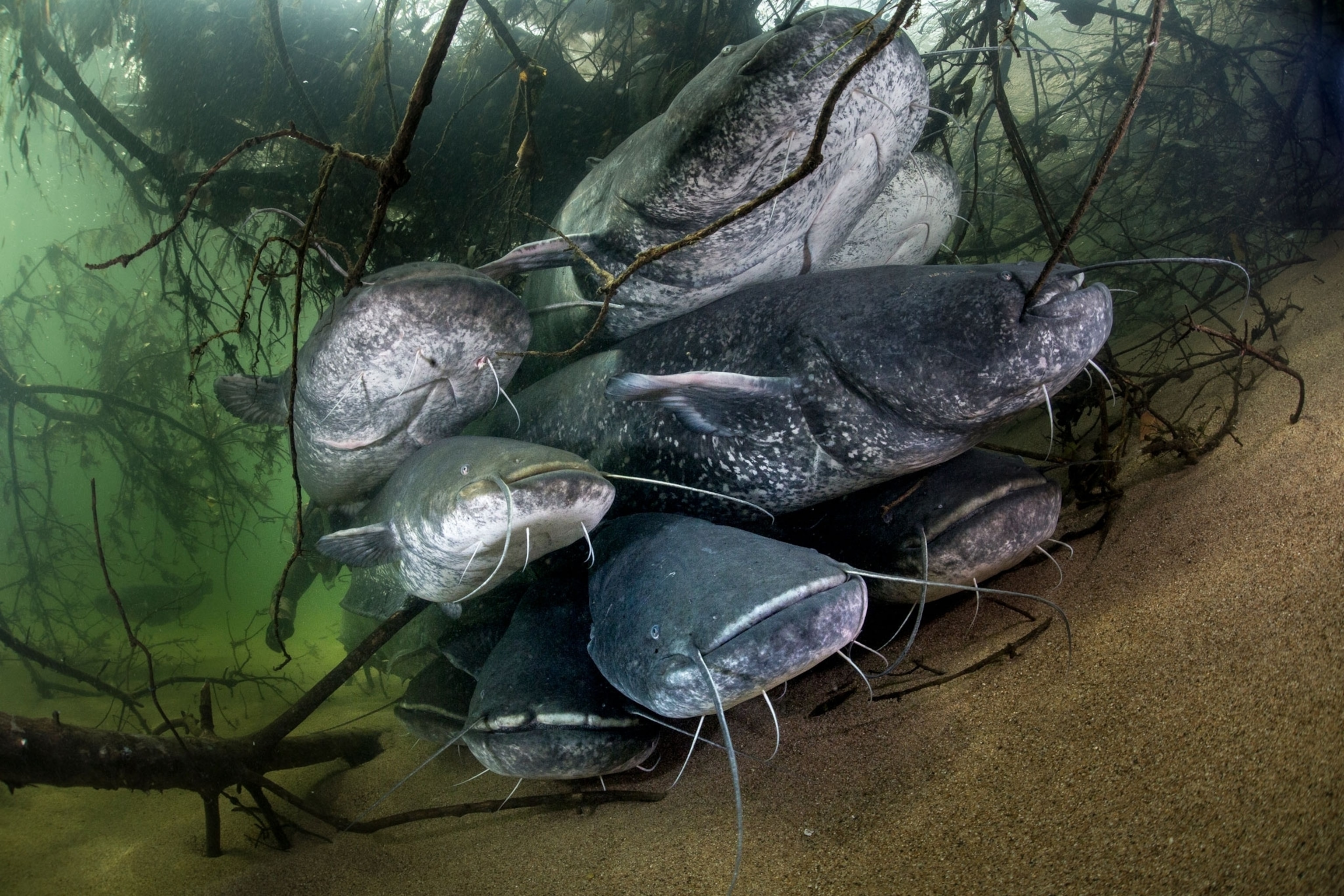 The continent’s largest freshwater fish, native to Eastern Europe, is an invasive species that threatens native fish already in decline.

Wels catfish, which are native to Eastern Europe, can grow up to 10 feet long.

The first time Frédéric Santoul witnessed the voracious feeding habits of Europe’s largest freshwater fish, he was standing on a medieval bridge in Albi, a town in southern France.

On a small island below, in the Tarn River, pigeons wandered about, oblivious to the group of wels catfish moving near the gravel bank. Suddenly a fish catapulted out of the water and onto land, snatching a pigeon in a flurry of feathers before heaving itself back into the river, bird in mouth.

“I knew that killer whales can beach themselves [to catch seals], but I had never seen that kind of behavior with fish,” says Santoul, a fish ecologist at the University of Toulouse, who spent the rest of the summer documenting the phenomenon.

At the time, almost a decade ago, little was known about the wels (also known as European) catfish in Western Europe, where it was introduced by anglers in the 1970s. The species, which can grow up to 10 feet long and weigh up to 600 pounds, is native to Eastern Europe, but has since expanded into at least 10 countries throughout Western and Southern Europe.

In its native habitat, where the animal is both fished and farmed for food, the wels catfish is not considered a problem species. There, populations appear to have remained relatively stable for decades, with little evidence of excessive predation on other native fish.

But in newly inhabited rivers, these aquatic invaders are targeting endangered and commercially important migratory fish, such as Allis shad and Atlantic salmon, whose European populations are already in serious decline, Santoul says.

He’s concerned the predator could wipe out many native Western European fish species, fundamentally altering river ecosystems that are already struggling from the impacts of dams, water pollution, and overfishing. (Read how European rivers are littered with human-made barricades.)

“The cumulative effects of these factors could lead to a collapse of fish populations in another 10 years,” warns Santoul.

In 1974, a German angler released several thousand wels fry into Spain’s Ebro River. Other anglers, hoping for the opportunity to catch such a huge fish, did the same in rivers in other countries, and the species proliferated.

Like many invasive species, wels catfish thrive in rivers that have been altered by humans, where high water temperatures and low oxygen levels may have pushed out native species. The catfish also grows quickly, has a long life span (possibly up to 80 years), and reproduces easily, with females producing hundreds of thousands of eggs at a time.

But their hunting skills may give them their most formidable edge. Like all catfishes, wels have highly developed senses, particularly in detecting prey vibrations. They also have “an amazing ability to adapt to novel food sources,” says Santoul, who has documented how the catfish prey on Asian clams, another invasive species.

The catfish heavily target migratory fish moving from the sea into rivers to spawn, such as Atlantic salmon, which historically has had few predators; sea lampreys, primitive, jawless fish that are endangered in Europe; and Allis shad, a commercially valuable seafood.

They’ve also adopted new hunting strategies not observed in their native range, such as snatching pigeons from land.

In France’s Garonne River, the catfish will sometimes wait inside a fish tunnel to trap and kill salmon migrating through a hydropower plant.

In the same river, wels catfish have also learned to target spawning Allis shad at the river’s surface at nighttime, when the fish are preoccupied in their courtship displays, according to a study published in November 2020. An analysis of more than 250 catfish stomach contents revealed shad made up more than 80 percent of their diet—“the giants’ feast,” according to the study.

“All of these studies reach the same conclusion: That the European catfishes have become a serious threat to important migratory fish,” says Santoul.

But, he adds, there’s one species the catfish does not harm: Us. Despite a reputation as a gaping, broad-headed beast that attacks and even kills humans, “they’re harmless and curious with people, and you can swim right up to them in the river,” Santoul says.

There are other examples of large, invasive fish disrupting freshwater ecosystems: the Nile perch, whose introduction as a game fish into Lake Victoria and other East African lakes in the 1960s resulted in the collapse of at least 200 native cichlid fish species by the 1980s.

More often than not, however, large freshwater fish are declining, threatened by invasive species, habitat loss, and overfishing. These species, often called megafishes, have declined globally by a staggering 94 percent since 1970, according to a 2019 study.

In its ability to adapt and spread, “the wels catfish really is an exception among the megafish,” says Zeb Hogan, a National Geographic Explorer and fish biologist at the University of Nevada, Reno, who founded the Megafishes Project and studies many of the most endangered large freshwater fish in Southeast Asia’s Mekong region. (See the stingray that may be the world’s biggest freshwater fish.)

Freshwater ecosystems as a whole are the most threatened in the world, with introductions of non-native species recognized as a leading cause, Hogan says.

Ecological shifts driven by climate change, including warming temperatures and changes in precipitation patterns, could create even more favorable conditions for the wels catfish to spread, scientists say.

There is evidence that the wels catfish, which need water temperatures of at least 68 degrees Fahrenheit for their annual spawning, are colonizing previously uninhabited rivers in Belgium and the Netherlands as those water bodies warm, Santoul says.

There are also signs that catfish spawning now occurs several times a year in France, as rivers there stay warmer for longer periods of the year, he says.

On the Iberian Peninsula, home to more than 40 freshwater fishes found nowhere else, the aquatic invader has likely already extirpated one species, says Emili García-Berthou, an aquatic ecologist at the University of Girona in Spain.

“We forecast that the catfish, which is abundant in the main stem of the Ebro,” the river where they were first introduced, “will spread considerably upstream.”

And solutions remain scant, conservationists say. With a vibrant catch-and-release angling business built up around the wels catfish, primarily in Spain and Italy, there appears to be little appetite among governments and fisheries to remove the fish. Though they’re often eaten in Eastern Europe, they’ve never really caught on as a seafood in other parts of the continent.

Santoul stresses that European countries need to work more closely together to conserve freshwater ecosystems and address the threats facing migrating fish, such as dams. There are also no efforts underway to eradicate the catfish, Santoul says.

“My concern is for these migrating species that have already decreased before the catfish came here,” says Santoul. “If we at the European level we do not coordinate our conservation plans, it might be too late to save them.”

A frequent contributor to National Geographic, Stefan Lovgren often writes about freshwater conservation issues. He covers the Mekong River in Southeast Asia as part of a USAID project called “Wonders of the Mekong.” Follow the project on Instagram.