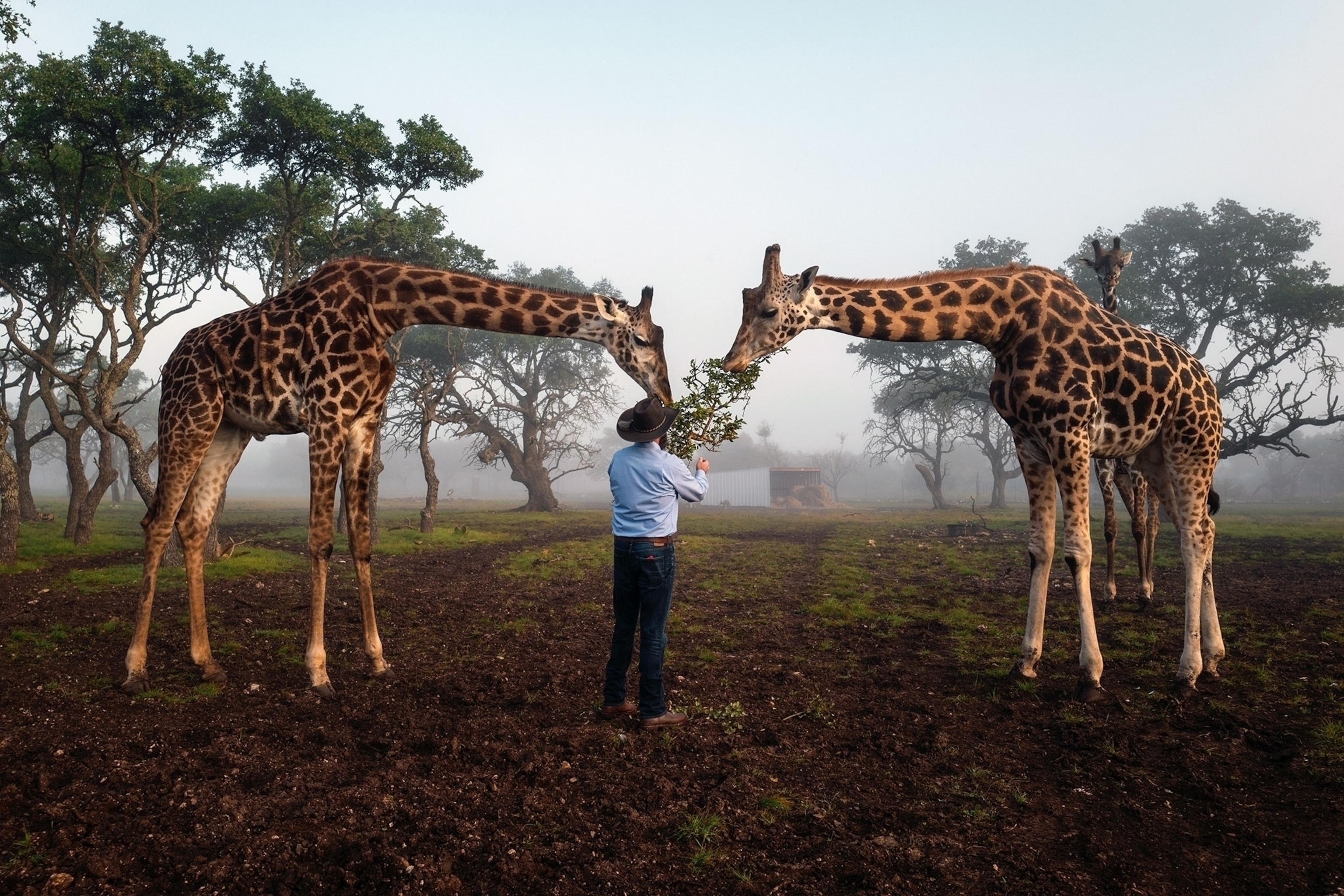 There are now more than a million nonnative animals belonging to 125 species on ranches across the state. Despite controversy, the industry continues to grow.

Brian Gilroy, the owner of exotic ranching business Wildlife Partners, feeds giraffes in Mountain Home, Texas, in fall 2018, when photographer Mélanie Wenger visited game ranches across Texas. A pair of adult giraffes can sell for $250,000 or more, he says. Unlike many other species traded in the industry, giraffes are not hunted—they’re bought and sold as novelties to landowners. Like most ranches that own exotic hoofstock Wildlife Partners doesn’t offer commercial hunts. Instead the company breeds, buys, and sells animals, and transports them between ranches.

Mountain Home, TEXASFrom a certain angle, the gently curving horns of a scimitar-horned oryx can look like a single spike. Scholars believe this antelope, or its closely related cousin, the Arabian oryx, may have been the source of the unicorn myth. But as with the fabled beasts, you’d have a hard time finding them: They’re classified as extinct in the wild.

Yet here I am, riding on an ATV in the Texas Hill Country, watching a herd of about 30 oryxes kicking up the scent of blooming lavender as they gallop across the rocky terrain.

The ATV driver, Brian Gilroy, marvels at them. “There are more here than exist in the wild,” he says. Gilroy runs a company called Wildlife Partners, to which this 1,750-acre property and these animals belong.

Wildlife Partners is one of Texas’ newest and largest exotic wildlife ranching companies. It specializes in raising, buying, selling, and transporting hoofed animals, from oryxes to zebras to Cape buffalo. These animals “are good as $100 bills,” Gilroy says.

This ranch is just one of thousands throughout Texas that raises exotic hoofed animals, also known as hoofstock or ungulates. There are more than a million non-native hoofstock across the state, belonging to 125 different species, according to Charly Seale, head of Texas-based Exotic Wildlife Association, an industry group with some 5,000 ranchers as members. The industry brings in $2 billion in revenue annually, he says.

As with domestic cattle operations, owners make money by raising and selling the animals—to each other, to wealthy landowners who enjoy owning the creatures, and to commercial hunting operations, where customers can put up large fees to shoot rare, exotic animals without traveling abroad. (Read more about sport hunting here.)

Wildlife Partners, like many exotic game ranches, is not a commercial hunting ranch. Its revenue comes from breeding, buying, and selling animals. Some of those creatures, however, do end up on hunting ranches.

But the bulk of the industry, Gilroy says, is made up of private citizens who don’t offer commercial hunts. "Owning exotic wildlife gives landowners a sense of pride,” Gilroy says, as well as status.

Exotic ranchers tend to be private and wary toward the media, which many consider to be biased toward urban, anti-hunting viewpoints. They worry about being misrepresented.

The owners of Y.O. Ranch in Mountain Home, for example, agreed to meet me in 2019 against the counsel of friends. “We love America, we love the military, and we love our animals,” Byron Sadler says, summarizing his affection for and sense of duty toward all three. Questioning one is like questioning all—in other words, the institution of exotic animal ownership is not open for debate.

Gilroy is more open with journalists, however. “If we don’t tell our story, somebody else will,” he says.

What makes an animal wild?

Some of the species on these ranches are threatened, endangered, or even extinct in the wild, like the scimitar-horned oryx. But these and almost all exotic hoofstock species on Texas ranches can be hunted legally because most aren’t on the U.S. Endangered Species Act list, which focuses primarily on the protection of native species. Under Texas law, exotic species are classified as “livestock,” so while the owners must adhere to certain animal health requirements, there’s little regulation beyond that.

You can hunt them “day or night,” says John Silovsky, deputy director of the Texas Parks and Wildlife Department. “No bag limits, no seasons.”

Aaron Bulkley, owner of Texas Hunt Lodge, about 60 miles northwest of San Antonio, says that the exotic ranching business has grown in recent years for the simple reason that the overall economy has grown.

Grace Ingrande, 17, waits for a clear shot at an axis deer in a hunting blind at 777. Ingrande says she loves to hunt with her dad, a tugboat captain. “It feels like the world is stopping, and it’s just me and the gun and the deer,” she says of the feeling she gets when taking a shot.

More people have realized they can raise and sell exotic animals for greater profit than domestic livestock. While a domestic cow generally sells a for little over $1,000, even a common exotic animal such as a scimitar-horned oryx can go for four times that amount.

Demand for year-round hunting and the draw of being able to sell year-round hunts without the restrictions that come with white-tailed deer breeding and hunting have also been drivers of growth.

During the coronavirus pandemic, Texas Governor Greg Abbott deemed hunting and agriculture—which includes animal breeding operations—“essential” activities, so the industry hasn’t been heavily impacted despite the economic downturn, Seale says. “The sale of breeding stock has remained strong,” he says.

The industry does have its critics. Some animal-rights activists, who object to the idea that wild animals are resources for humans to profit from, have sought to curtail the exotic ranching industry. They object to the commercialization of wildlife and the hunting of globally rare animals for sport—a tough argument to win in a place like Texas Hill Country, where deer-hunting season is a fall tradition.

“It’s not right to shoot a doomed lawn ornament on a hunting ranch—it’s not conservation,” says Priscilla Feral, president of the Connecticut-based animal welfare group Friends of Animals, which has sued the U.S. Fish and Wildlife Service several times to try to limit the ownership of endangered animals. The group succeeded in 2009 in getting ranchers to donate the harvest fees of three species to conservation causes, though that requirement was reversed by Congress in 2014.

Still, a portion of hunting fees from four other exotic species—the barasingha, Arabian oryx, Eld’s deer, and red lechwe—must go toward the species’ “enhancement” in their native ranges, which could include government-approved programs of reintroduction, habitat improvement, and the like. But because these programs are typically based outside of the U.S., maintaining oversight and monitoring effectiveness can be difficult. Beyond that, as private businesses, exotic wildlife ranches have no obligation to contribute to conservation efforts.

Nonetheless, many ranchers and hunters argue that there’s conservation value in these herds of exotic animals as “insurance populations”—if a species goes extinct in the wild, at least they still exist on Texas ranches, the thinking goes. Zoos make the same argument, but accredited zoos participate in intensively managed Species Survival Plans to maintain genetically diverse and sustainable populations. A few ranches in Texas participate in such programs; most do not.

Some ranches have participated in breeding programs for Arabian and scimitar-horned oryx to be reintroduced to the wild, but Feral and other conservationists point out that such programs are rare. They also point out that exotic animals have escaped from their Texas ranches, causing ecological damage, and that exotic ranch owners—like livestock ranch owners—kill native predators including bobcats, coyotes, and mountain lions to protect their herds.

Gilroy acknowledges he’s a business owner first and foremost, and that he’s focused on growing his company—not conservation. But in the future, he’d like to help some of these animal species somehow, besides just breeding a lot of them—though he’s not sure yet what that would look like. “It’s difficult to be charitable without being successful,” he says.

Mélanie Wenger is a National Geographic explorer and founding member of Inland. You can follow her on Instagram.