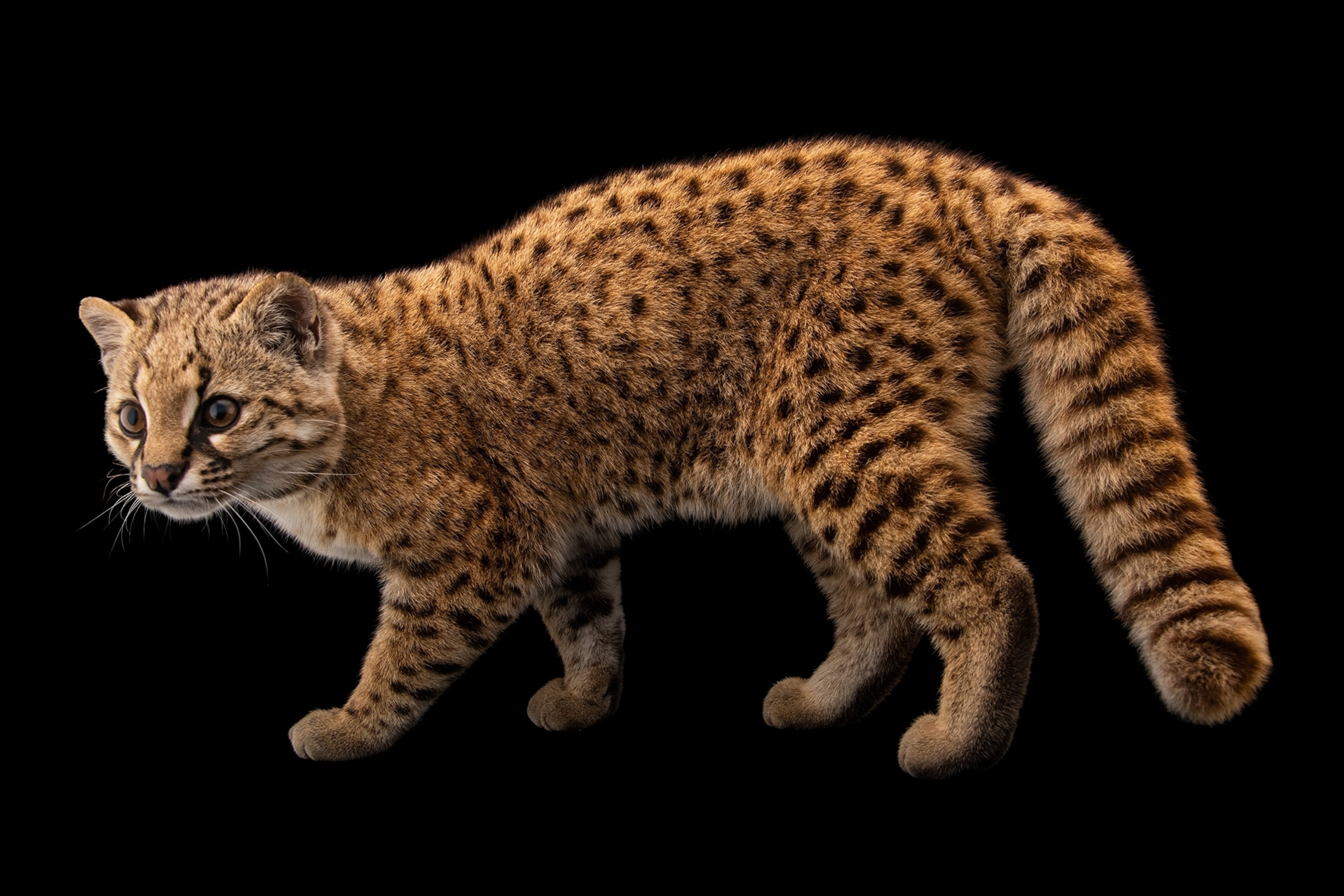 The smallest wildcat in the Americas is the 10,000th image in National Geographic's Photo Ark, which aims to document every captive species.

Pikumche is a male northern güiña who was orphaned and raised by people at Fauna Andina in Chile. He was a "sweetheart" during his photo shoot, photographer Joel Sartore says, even rubbing against his legs.
Photograph by Joel Sartore, National Geographic Photo Ark
Update on June 1, 2020: Vandals have broken into Fauna Andina and shot a guanaco, a close relative of the llama, according to founder Fernando Vidal Mugica. Although the facility's eight güiñas are safe, this break-in follows one last week, when three pudu, a species of deer, were killed. Another two guanacos are missing. The perpetrators have threatened Vidal Mugica, he says, because they do not support the goals of the wildlife reserve, and want to use the land for other reasons. At least one of them had donated land to the reserve and wants it back, he says. Vidal Mugica is working with the police.

Tiptoeing through scrubby woodlands and fern-rich rainforests in Chile and a sliver of Argentina is a tiny feline called the güiña.

Half the size of a house cat, with a bottlebrush tail and a cartoon-cute face striped with black, the güiña holds the record for smallest wildcat in the Americas. Its petite stature—just under six pounds—combined with its extreme shyness and scientific obscurity means most people don’t even know it exists.

The güiña, named Pikumche, marks the 10,000th animal in National Geographic’s Photo Ark, a quest by photographer Joel Sartore to document every species living in zoos and wildlife sanctuaries around the world.

As with most of the planet's 33 small wildcat species, the güiña, whose spotted fur ranges in hue from silver to russet, is “very much a mystery cat. They live in the shadows,” Sartore says. (Read more about little-known small wildcats.)

For Photo Ark, Sartore has immortalized all creatures great and small—from mussels and beetles to ostriches and elephants—in more than 50 countries. He won’t stop, he says, until he photographs every one of the 15,000 captive species.

“Ten thousand is a big number—it represents a little bit of light in the tunnel of us finishing the project within 10 to 15 years,” says Sartore, who hopes his photographs will motivate the public to care about the extinction crisis before it’s too late. “I feel like people are paying attention now.”

As with many members of the Photo Ark, the güiña, which comes in two subspecies, is considered vulnerable to extinction. That’s mostly because of degradation of their 115,000 square-mile range, the smallest of any Latin American cat. The southern güiña, Leopardus guigna guigna, inhabits the dense, mossy forests of southern Chile and is smaller and darker than Leopardus guigna tigrillo, the northern güiña of central Chile’s matorral shrubland.

For his milestone photo, Sartore traveled to what’s likely the only place on Earth that has captive güiñas: Fauna Andina, a licensed wildlife reserve and rehabilitation center in south-central Chile. Here, founder Fernando Vidal Mugica looks after güiñas that were injured in the wild, sometimes releasing them back into the forest.

Pikumche, a male northern güiña and the subject of Sartore’s portrait, is a special case. Orphaned at 10 days old when a predator killed his mother, he was hand-reared at the center. Now two-and-a-half years old, he’s so habituated to people that he can’t be reintroduced to the wild. After having such a difficult start in life, “he is a very confident cat,” Vidal Mugica said in a text message. His name honors the Pikumche, a pre-Columbian native culture in what is now northern Chile, he says.

Sartore also filmed video of Pikumche vocalizing, possibly the first güiña sounds ever recorded. The low repetitive noises are likely expressions of pleasure or excitement, according to Vidal Mugica’s observations, while the meow announces Pikumche’s presence to the seven other güiñas at Fauna Andina.

“This cat is serving as the Rosetta stone for the species,” Sartore says of Pikumche. That’s because the cat’s vocalizations add to scientists’ limited understanding of the animal; even its population numbers and basic biology, such as mating and reproduction, remain enigmatic. (Learn about Sartore’s most memorable Photo Ark assignment.)

Güiñas are one of eight species of Latin American small wildcat and are most closely related to ocelots, a better known species with a much bigger range—including parts of the southern United States.

As generalists, güiñas eat pretty much anything they can get their claws on—from marsupials to insects to frogs to birds. They especially like rodents, which are abundant in the thick understory. Agile climbers, the cats readily scramble up tree trunks to pluck small mammals and birds from their cavities. (A recent study showed they also prey on baby birds inside nest boxes.)

Güiñas also kill poultry if given a chance, and their reputation as henhouse raiders provokes farmers to kill them sometimes, says Jim Sanderson, who did his Ph.D. research on güiñas in Chile in 1997.

The Canada lynx—seen here on the shore of Loon Lake in Ontario, Canada, in 1906—is listed as "threatened" under the U.S. Endangered Species Act.

At the time, the species was “virtually unknown” to modern science, says Sanderson, now a program manager at Global Wildlife Conservation, a Texas-based nonprofit that works to protect rare wildlife. “We had a single photograph of one cat and specimens from 1919—the sum total of our knowledge,” he says.

During his research in Chiloe, an island off the Chilean coast, Sanderson found that simply patching up holes in henhouse chicken wire prevented the cats from getting in—an example, he says, of how working closely with local people can help a threatened species. (See more Photo Ark species in peril.)

Farmers should welcome güiñas, which are “incredibly harmless” to people, says Luke Hunter, executive director of the Wildlife Conservation Society’s Big Cats Program and author of the book Wild Cats of the World. One güiña can likely kill thousands of crop-raiding rodents a year. “They’re providing this undocumented benefit to anyone who has ever had a problem with rodents,” he says.

Photo Ark: Saving Species One Photo at a Time

Retribution killings are less frequent these days, but güiñas still die as a result of attacks by free-ranging dogs, rodenticide poisoning, and car collisions. But the biggest threat by far, Sanderson says, is habitat loss and deforestation, particularly in central Chile.

Widespread cutting of forests to make way for commercial tree plantations, vineyards, and livestock rangelands has marooned the cats—which are too shy around humans to venture into the open and move between forest patches—in isolated groups.

“They depend on the native forest to exist,” says Vidal Mugica. “Protecting [it] is the main goal.”

To that end, Constanza Napolitano, a National Geographic Explorer and ecologist at Universidad de Los Lagos in Osorno, is working to make the biodiverse Valdivian rainforest in southern Chile safer for güiñas.

In partnership with the government, she’s designing wildlife corridors so the animals can move between forest patches and is engaging with local companies to develop cat-friendly land-use policies. Napolitano is also conducting environmental education programs for local children to learn about their native cat.

‘Little emblem of the wild’

Both Hunter and Sanderson agree that the güiña’s addition to the Photo Ark will boost the cat’s image.

Sanderson praised Sartore’s dedication to photographing so many small rare wildcats—from Iberian lynx to African golden cats. “He loves his cats,” Sanderson chuckles. “He waited for 10,000 to put the güiña on top.”

Says Hunter, “it’s great that this [Photo Ark] project has brought such a significant profile to these little-appreciated species.”

It’s ironic and sad, he adds, that so many people cherish their house cats yet know next to nothing about their untamed kin on every continent but Antarctica.

“If you were fortunate enough to see this beautiful creature in the wild, you’d be thinking immediately of the parallels with your own pet cat,” he says. “It’s this little emblem of the wild.”