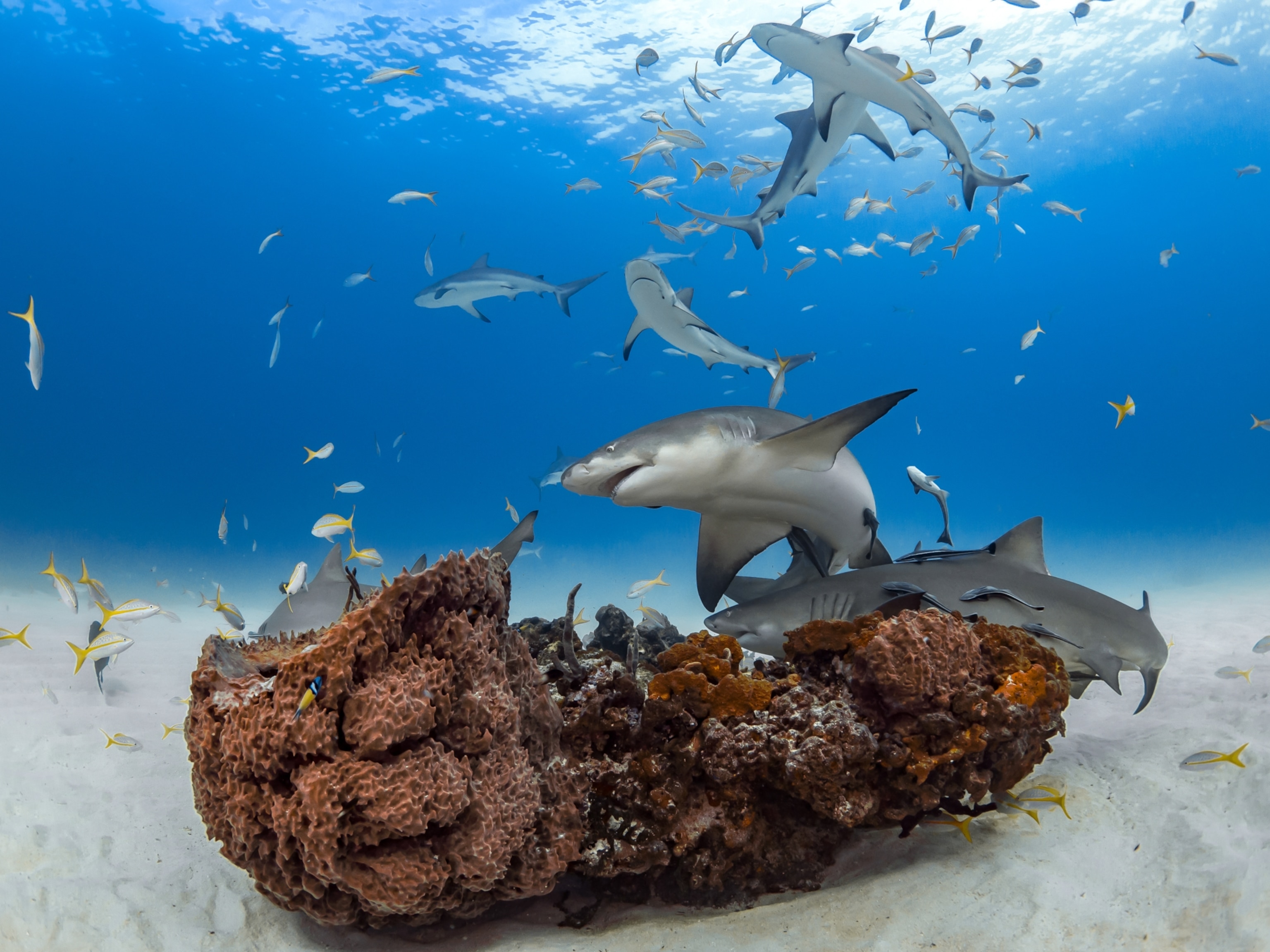 They’re more like us than we realized, scientists say. But why sharks socialize is still an open question.

Lemon sharks (above, animals swarm around a coral mound off Grand Bahama Island) can display certain personalities, such as gregarious or standoffish.

Many of us think of sharks as powerful, mysterious, and solitary as they glide through the deep. And no wonder, since the fish have long been portrayed in popular media as lone predators, appearing out of nowhere to attack.

But that image has come under scrutiny in recent years, as shark researchers around the world have discovered the fish congregating in large numbers and interacting with others of their own species in ways that are decidedly friendly.

Yannis Papastamatiou, a marine scientist at Florida International University, and his team used acoustic transmitters to record the interactions over four years of about 40 gray reef sharks around Palmyra Atoll, southwest of Hawaii. (Read about the most fascinating shark discoveries of the last decade.)

Their study, published in 2020 in the journal Proceedings of the Royal Society B, found that reef sharks return to the same communities year after year, forming clear preferences for the company of certain other individuals, with some “friendships” that endured throughout the study.

“We now know that sharks are capable of forming social associations with other individuals that last years,” says Papastamatiou, also a National Geographic Explorer. His team’s research will be highlighted in the episode “Shark Gangs,” premiering July 7 on National Geographic’s SharkFest. The sharks’ social associations may have lasted even longer, but the data was limited to the four-year battery life of the transmitters.

Other research in the journal Scientific Reports has found complex social networks between sand tiger sharks along the eastern U.S, relationships once thought to be strictly the domain of higher-order mammals such as chimpanzees, says Danielle Haulsee, who led the study while at the University of Delaware.

In her 2016 study, Haulsee and colleagues found that individual sharks tagged with recording devices had thousands of interactions with their peers, with some pairs spending up to four straight days together.

You’re going to need a bigger screen. Tune in to the biggest SharkFest ever, spanning six weeks and airing across four networks and Disney+. The 9th annual SharkFest starts Monday, July 5, at 9/8c on National Geographic with the one-hour marquee doc special Shark Beach With Chris Hemsworth.

“For instance, this research on their personality and social lives shows they’re actually way more like us than we realized,” says Graham, who is also president and CEO of Minorities in Shark Science, a group dedicated to helping women of color break down the barriers necessary to enter the field.

Teasing out why sharks socialize—and how much of their behavior is cooperative—is a challenge, but there are some clues, such as food availability and warmer waters due to a changing climate.

Great white sharks, primarily juveniles, are showing up in record numbers along southern California beaches as the population has rebounded since 1994, when the species was protected by the state.

While great white sharks typically maintain distances of about 30 feet from each other and don’t seem too “buddy-buddy,” as Lowe puts it, they are clearly drawn together by a preference for the area.

“We think it’s analogous to a playground or schoolyard—some are eating, some are just hanging out, some are trying to avoid the bullies,” Lowe says. “So the question is, Why do [shark] kids come to this playground, what draws them there?” (Read why great whites are still such a mystery to us.)

He has some theories: Stingrays, their favorite food, are plentiful in the area. Staying close to shore provides protection from predators, such as bigger sharks. And as temperatures in the Pacific rise due to climate change, great whites are following the warming waters farther and farther north.

Whether sharks join forces to hunt is harder to figure out, says Matt Smukall, director of the Bimini Shark Lab in the Bahamas’ Bimini Islands. For instance,  some species, such as bull sharks and blacktip sharks, will gather in the dozens when fish spawn en masse, sometimes appearing to corral their prey.

“The question is, is this true cooperation, with the sharks deliberately working together to optimize hunting conditions?” Smukall says. “It could be that there’s this huge abundance of food and everyone turns up for the feast.”

Either way, he says, the sharks win: “What’s good for one shark is good for the other sharks, and everybody’s success goes up."

Favorable water currents may also be a reason why sharks assemble, Papastamatiou adds.

In a new study published in July 2021, he documented a surprising behavior in gray reef sharks in French Polynesia: surfing. Hundreds of these perpetual swimmers were observed riding the waves together, giving them a chance to save energy—and even sleep.

“We have been looking for explanations for why sharks gather in certain places, and this provides an answer,” Papastamatiou says. “These findings could also apply to other coastal areas, and possibly explain why sharks may prefer one area over another.”

In some cases, there may not be an obvious purpose for shark camaraderie. At the Bimini Shark Lab, Smukall and his colleagues found that young lemon sharks sought out companionship of other sharks for no discernible reason. There’s growing evidence that lemon sharks have their own personalities, which may influence whether they spend time with other sharks, he adds.

Baby lemon sharks observed in open-water pens in their native habitat demonstrated a range of social temperaments, with some gregarious animals engaging in frequent interactions while others remained more standoffish, preferring to stay by themselves.

As in humans, those personality differences can play a role in success and even survival. For example, baby lemon sharks deemed to be more explorative in the pens and then tagged with recording devices were found to be bigger risk-takers in the wild as well, venturing farther to find food, which caused them to grow and mature faster, according to Smukall’s research.

This adventurousness came at a price, though; the larger and faster sharks also had lower rates of survival since it made them more likely to encounter predators. (Read about a deep-sea shark bonanza seen off a remote island chain.)

More would be known about the intimate lives of sharks if the field weren’t so new, due in part to a lack of funding and sharks’ negative reputation. “We’ve only had about 20 years to really start studying sharks,” says Lowe.

Compounding that issue, shark populations continue to crash, due largely to overfishing. Sharks and rays have suffered a staggering 71 percent population decline since 1970, with reef sharks in particularly dire straits.

But thanks to initiatives such as Minorities in Shark Science, shark science is expanding and diversifying in ways never thought possible, says Graham. (Learn about six sharks you’ve probably never heard of.)

“I believe we’ll discover so much more about sharks in the coming years,” she says. “It’s exciting to think we’ll understand them better than we ever have before.”