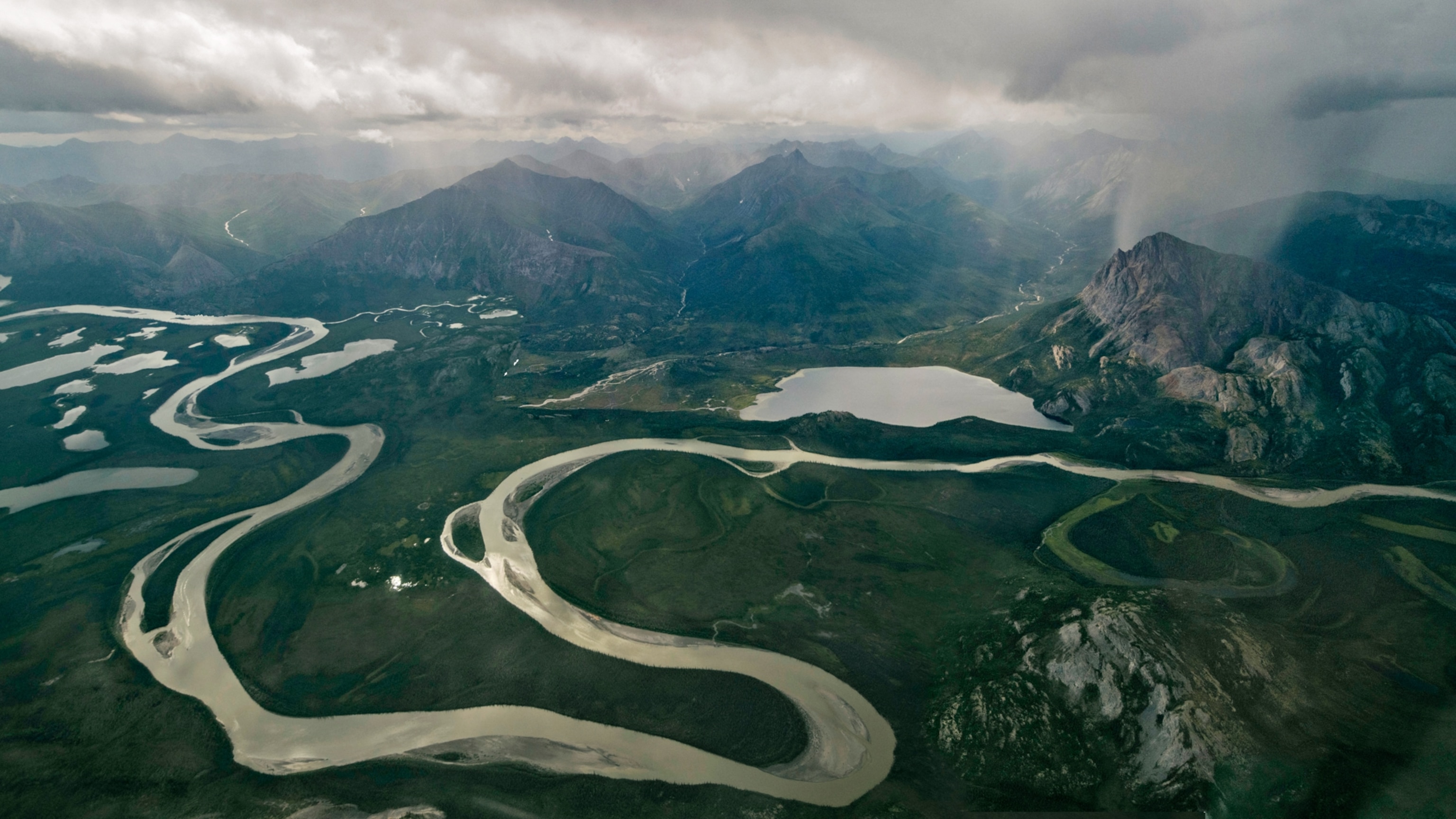 Overshadowed by the turmoil of the presidential transition, the Trump administration's actions may harm animals and the environment.

A view of the central Brooks Range, Alaska, near the Arctic National Wildlife Refuge. On January 6, the Trump Administration sold leases to drill for oil in this pristine wilderness area.

Over the past four years, wildlife and environmental protections in the United States have been under attack. President Donald Trump’s administration has pursued a campaign of deregulation, undoing or weakening scores of laws and policies that protect threatened species and the environment.

Policies that hurt wildlife have included scuttling a complex compromise to conserve sage grouse, plowing through wilderness areas to build a border wall, and removing gray wolves from the Endangered Species Act. “The Trump Administration has been consistently bad on wildlife... from day one until the last days,” says Drew Caputo, vice president of litigation for Earthjustice, an environmental law group.

That pattern has continued in the final hours of Trump’s presidency. Here are a few of the key environmental developments, which during the pandemic, impeachment, and political unrest, haven’t received enough attention, experts say.

The U.S. Fish and Wildlife Service did not respond to National Geographic’s requests for comment on this or related issues.

The Trump Administration announced a suite of changes in 2019 that weakened the U.S. Endangered Species Act, such as not automatically protecting threatened species and not considering the impact of climate change in making recommendations for species conservation.

But in the past month, two additional actions have made it more difficult to establish “critical habitat,” specific geographic areas set aside for species’ survival under the act, Caputo explains.

One of the changes “shrinks the universe of habitat that can be protected,” he says. An example would be preventing certain human-impacted areas that need restoration from being counted as critical habitat. Another change makes it easier to avoid establishing habitat by claiming the economic costs of doing so are too great.

“If you put those together, they are two big fat thumbs on the scale in favor of industry and against endangered species,” Caputo says.

Rob Wallace, assistant secretary for the U.S. Fish and Wildlife Service, said in a statement that these actions “will bring greater clarity and consistency to how the service designates critical habitat.”

Making critical habitat more difficult to establish hurts all threatened and endangered species, Caputo says, but some midnight decisions could be more harmful to particular animals.

The northern spotted owl, a federally threatened species, lives only in old-growth forest on the U.S. West Coast. On January 13, the Fish and Wildlife Service announced that it had slashed more than three million acres of critical habitat for the owl, which some fear could pave the way for logging in these areas. The move came as a shock to many conservationists, and several groups indicated they will sue the service if the rule isn’t changed, which they expect it will be under a Biden Administration.

“At every turn, the Trump Administration is undercutting the northern spotted owl’s chances of survival,” says Jamie Rappaport Clark, president of Defenders of Wildlife, a conservation group.

“Despite scientific evidence showing that this owl is endangered, the agency refuses to increase protections for the beleaguered bird.” (Read how endangered species could fare better under Biden.)

Only around 300 wolverines remain in the western U.S., in part because they rely on dwindling snow reserves to den, hunt, and cache food. Despite their very low population, and the fact that snowpacks are shrinking and disappearing as the climate warms, in December the Fish and Wildlife Service declined to list them as threatened.

The agency justified its decision not to list the species, claiming the predators are expanding in some areas, that there is enough snow to sustain them, and that they are not genetically distinct from populations in Canada.

But many scientists disagree, and a large consortium of conservation groups are suing the government.

“Wolverines are barely hanging on, even without the added threat of climate change,” says Bonnie Rice, of the Sierra Club's Our Wild America Campaign, in an email.

The Arctic National Wildlife Refuge, a vast expanse of pristine habitat on Alaska’s North Slope, is home to large populations of caribou, polar bears, and many other species. Politicians have waged a long battle for the right to drill for oil there, and, on January 6, the Trump Administration successfully pushed to open a sale for oil leases on more than one million acres of the refuge.

But only about half of the leases were bought, and the sale brought in a fraction of the revenue expected. Most of these were bought by the Alaska Industrial Development Corporation, a state agency. Major oil companies stayed away.

The oil leases are not finalized, however, and it’s possible that a court or the Biden Administration could intervene to prevent future drilling. (Learn more: This wilderness crown jewel is opening for oil drilling. Why is industry interest so weak?)

Insufficient action to save right whales

After centuries of hunting, fewer than 400 North Atlantic right whales live off the northeastern U.S. and southeastern Canada. Since 2017, several of the critically endangered species have died in what the U.S. National Oceanic and Atmospheric Administration terms an “unusual mortality event.” Caused in part by ship strikes and entanglements with fishing lines, these deaths are numerous enough to cause imminent extinction, conservationists say.

In December, the U.S. National Marine Fisheries Service issued a draft environmental impact statement and proposed rules to limit fishing and vehicle speed limits in some areas where right whales are found. But Jane Davenport, a senior attorney with Defenders of Wildlife, says these moves are not sufficient.

This “long-delayed response [is] not going to be enough to help right whales avoid these painful and deadly entanglements and ship strikes,” she says.

Conservationists are calling for more drastic measures to prevent deaths of right whales, such as investing heavily in more whale-friendly gear for lobster fishers and closures of more areas to fishing and ship traffic. (Learn more: These endangered whales are disturbingly thin.)

On January 12, President Trump gave a speech in Alamo, Texas, celebrating the completion of 450 miles of border wall along the southern U.S. border. The wall, which continues to go up rapidly, has transformed the landscape, with the majority of the southern borders of California, Arizona, and New Mexico now ringed by 30-foot fencing.

The majority of these border areas previously had only short barriers, such as barbed wire fences or vehicle barriers. But the new wall prevents large animals, such as mountain lions, from moving north to south, which will impede gene flow and could lead to local extinctions, says Myles Traphagen, a conservation scientist with the nonpartisan environmental group Wildlands Network. Already, Traphagen’s camera traps have shown significant reductions in animal populations in San Bernardino National Wildlife Refuge, an ecologically important desert wetland on the border in southeastern Arizona.

Wall construction requires large amounts of water—more than 700,000 gallons per mile in some cases—and has drained already-stressed desert aquifers. Biden has said he will halt construction, but it’s unclear yet what he might do to remediate damage caused—some of which is irreversible. (Read more about the sacred Arizona spring drying up as border wall construction continues.)

Oak Flat, a picturesque mountainous area in Arizona’s Tonto National Forest, is considered sacred to many western Apache. Wendsler Nosie, Sr., former chairman of the San Carlos Apache Tribe, says it holds the same importance as Egypt’s Mount Sinai—as a place of divine revelation. The general area is also home to diverse plants and animals, including the endangered hedgehog cactus.

On January 15, the Forest Service plans to release a final environmental impact statement paving the way for the transfer of Oak Flat to Resolution Copper, a British and Australian mining company. If copper mining moves forward, it has the potential to destroy culturally important sites and artifacts, as well as emit pollution that could affect downstream water quality. (Learn more: Native American holy land to be traded to a foreign mining giant.)

This land swap was initially allowed by a last-minute rider that Senator John McCain inserted into the 2015 National Defense Authorization Act.

In California, some fishers still use large mesh driftnets, which can stretch more than a mile long, to catch animals including swordfish. But these nets indiscriminately kill and injure many creatures, including whales, dolphins, sea lions, sea turtles, and sharks.

These nets are not used anywhere else in the U.S. In a rare bipartisan effort, both houses of Congress passed a bill to phase out such driftnets.The bill was sent to President Trump to sign in December 2020. Instead, Trump vetoed the bill on December 31.

“It’s really discouraging—there’s simply no reason to be using this outmoded technology,” Davenport says. “It’s unfortunate Congress is going to have to go back to the drawing board.”

Making it easier to kill birds

Since 1918, the Migratory Bird Treaty Act has made it illegal to “pursue, hunt, take, capture, [or] kill … in any manner, any migratory bird” without permission. Thus, when companies have killed birds accidentally, as in high-profile instances such as the Exxon Valdez oil spill, they’ve had to pay large fines for doing so.

But the Trump Administration has changed the way this law is enforced. On January 5, the administration finalized a rule stipulating not to prosecute or fine companies or individuals for accidentally killing birds.

Conservationists say this rule greatly weakens protections for birds at a time when many species are in decline. (Learn more: U.S. industries are no longer liable for accidental bird deaths.)

Some of the damage these actions have caused is likely irreversible, such as the draining of desert aquifers for the border wall.

Conservationists are hopeful, however, that many of these last-minute actions may be unwound in courts or overturned by the incoming Biden Administration. But they note that this will take a lot of time and effort.