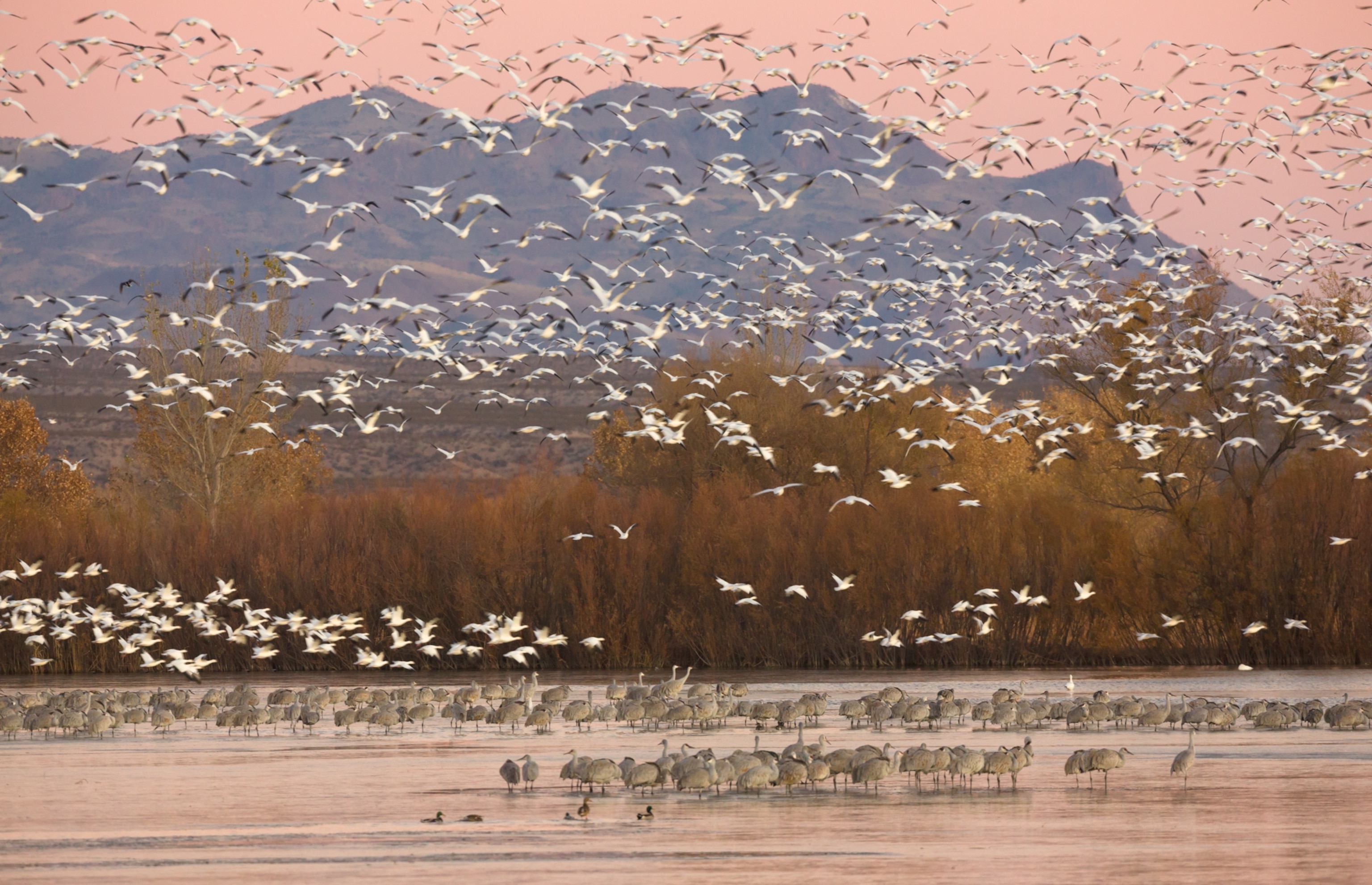 Could endangered species and other animals fare better under Biden?

The last four years were a setback for wildlife protection and animal welfare policy. Here are 6 things Biden might do to change course.

With Joe Biden declared president-elect, many advocates and conservationists are hopeful that animals in the U.S.—wild, captive, and farmed—may become better protected.

As with many policy areas, Biden declined to talk on the campaign trail about what his administration might do around safeguarding animals, and a Biden spokesperson did not respond to National Geographic’s request for comment on the subject.

But many animal and wildlife advocates anticipate that initial efforts will involve reversing course on Trump-era policies, which they argue ushered in a dramatic regression in protecting animals.

“Every administration comes in and undoes a little something, and you’re back battling something you thought you’d taken care of. But [these regressions] have been wholesale,” says Nancy Blaney, director of government affairs at the nonprofit Animal Welfare Institute.

Blaney and others say the Trump Administration’s tenure has been characterized by regulatory rollbacks and a pervasive lack of transparency. After his first year in office, the League of Conservation Voters—widely considered a reliable appraiser of politicians’ environmental leanings—issued a statement: “If there was anything worse than an ‘F’, President Trump would get it.” According to the group, the Trump Administration’s rating never improved.

As a long-time senator and two-term vice president to Barack Obama, Biden has earned a lifetime score of 83 percent from the League of Conservation Voters, suggesting a strong record on environmental and wildlife issues. He was endorsed for president by the Humane Society Legislative Fund for his robust voting record on animal welfare, having co-sponsored bills to protect horses from slaughter, ban animal fighting, and prohibit the trophy hunting of captive animals. Biden will also bring the first-ever shelter dog to live in the White House. The Bidens adopted Major, one of their two German shepherds, from the Delaware Humane Association in 2018.

What might Biden do upon entering office? We break down where the U.S. stands on animal-protection issues, and how the Biden Administration might approach policy changes.

Among the most concerning of Trump’s policies, scientists say, is a massive shift in the way the Endangered Species Act is enforced.

These changes, announced in August 2019, include taking economic considerations into account when enforcing the act; not giving automatic protections to threatened species; making it more difficult to designate critical habitat for endangered species; and not considering the impact of climate change in making recommendations for species protection.

These "amazingly comprehensive changes” have been “antithetical to the purpose of the Endangered Species Act,” says Kristen Boyles, a staff attorney with conservation nonprofit Earthjustice who works on wildlife issues. She says she hopes a Biden Administration would consider changing these policies, which wouldn’t be too difficult since they can be made by the secretaries of Interior and Commerce.

In response to these changes, Biden tweeted on August 12: “For decades, the Endangered Species Act has protected our most vulnerable wildlife from extinction. Now, President Trump wants to throw it all away. At a time when climate change is pushing our planet to the brink, we should strengthen protections—not weaken them.”

In such statements, Biden has made it clear he believes climate change is an “existential threat” to our planet. This is good news for his approach to wildlife, says Jacob Malcom, a conservationist with the nonprofit Defenders of Wildlife.

According to Malcom, our country “badly needs leaders” to tackle this issue, which is one of the three most important drivers of the biodiversity crisis, in addition to habitat loss and overexploitation. (Read about actions Biden can take to address climate change and protect the environment.)

The Trump Administration has made common practice of delisting endangered and threatened species, and has resisted protecting them. In the past few weeks alone, the administration delisted gray wolves and denied federal protections for the wolverine.

Biden has generally supported protections for endangered species throughout his 35-year career as a senator from Delaware—including listing species, when appropriate—and it’s reasonable to expect this will continue, experts say. He has a long record on these matters, starting when he voted for passage of the original Endangered Species Act of 1973, and similar laws in years since.

During his eight years as vice president, Biden had a relatively strong track record on endangered species protections. When Obama and Biden took office on January 20, 2009, they reversed some laws and rules that environmentalists had criticized under President George W. Bush.

For instance, the Obama Administration rewrote a recovery plan for the endangered northern spotted owl, which lives in old-growth forests of the Pacific Northwest. The Bush Administration had changed the plan in a way that favored logging interests, Boyles says.

“Any administration that believes in science, the huge danger of climate change, that has already spoken out about how we should strengthen protections for endangered species... that’s going to be a good thing for wildlife,” Boyles says.

There are about 3 billion fewer birds in North America now compared with 1970, due to habitat loss, pesticides and other factors. Since 1918, the Migratory Bird Treaty Act has been an important piece of legislation for protecting these animals. Among other things, it imposes fines on companies for killing most types of birds. In a break from how the law had always been enforced, the Trump Administration’s Department of the Interior changed its interpretation of the law to stop fining unintentional killing.

“It basically let industry totally off the hook for killing birds,” says Noah Greenwald, an endangered species advocate with the nonprofit Center for Biological Diversity. Greenwald thinks it's likely that Biden would restore the traditional interpretation of the act.

With this issue and others, “It’s like we lost four years under the Trump Administration that we didn’t really have to lose... and we’re hopeful that Biden will get us back on track, not just reversing the bad things but moving us forward,” Greenwald says.

The U.S. Department of Agriculture is responsible for enforcing the Animal Welfare Act, which regulates the treatment of animals sold as pets and used for research and exhibition, and the Humane Methods of Slaughter Act, which governs standards for slaughter of animals (except chickens and other birds, which aren’t regulated). There are no federal laws that govern the treatment of animals on farms; that’s left to the states, as are most matters of animal welfare not covered by the two laws above.

Two weeks after Trump was inaugurated in 2017, his administration set the tone for its animal welfare policy. The USDA purged its entire public database of animal welfare violation records—inspection records and annual reports for every commercial animal facility in the U.S., including zoos, breeders, factory farms, and laboratories.

The USDA, following sustained public pressure, eventually restored the database in February 2020, in the process revealing that enforcement had plummeted under Trump. The USDA issued 1,716 citations for violations of the Act in 2018, compared with 4,944 issued by the Obama Administration in 2016.

The Trump Administration killed speed limits for how many pigs can legally be slaughtered per hour, which, critics argue, means the factory line can move so fast that pigs are sometimes not properly stunned before being killed—meaning their throats are slit or they're dropped into boiling water while still conscious.

The administration killed a rule put in place by the Obama Administration stating that the “organic” label can only be used on animal products that have met specific welfare standards in their treatment of animals while alive, including access to fresh air and sunlight and having enough space to turn around comfortably; the rule also prohibited cutting chicken beaks and cow tails. The Trump Administration declined to complete an Obama-era initiative to ban horse soring, the deliberate act of injuring a show horse’s legs to increase the height of its step.

“An easy thing [for Biden] to start with is horse soring. Get it published—easy peasy,” says Blaney, since the Obama Administration already did much of the legwork. As a senator, Biden co-sponsored several horse-protection bills.

Blaney is hopeful Biden will change course from Trump’s approach. That could mean restoring and building upon Obama-era efforts to protect animals, as well as working with Congress to pass firmer federal animal welfare laws. (Read about how states across the U.S. have taken bold steps to protect animals)

“It used to be really like pulling teeth to get someone to introduce a bill and take it seriously. Now, every [lawmaker’s] office has an animal welfare staffer,” she says. “There’s just more interest and sensitivity to the lives of animals and how important they are to people.”