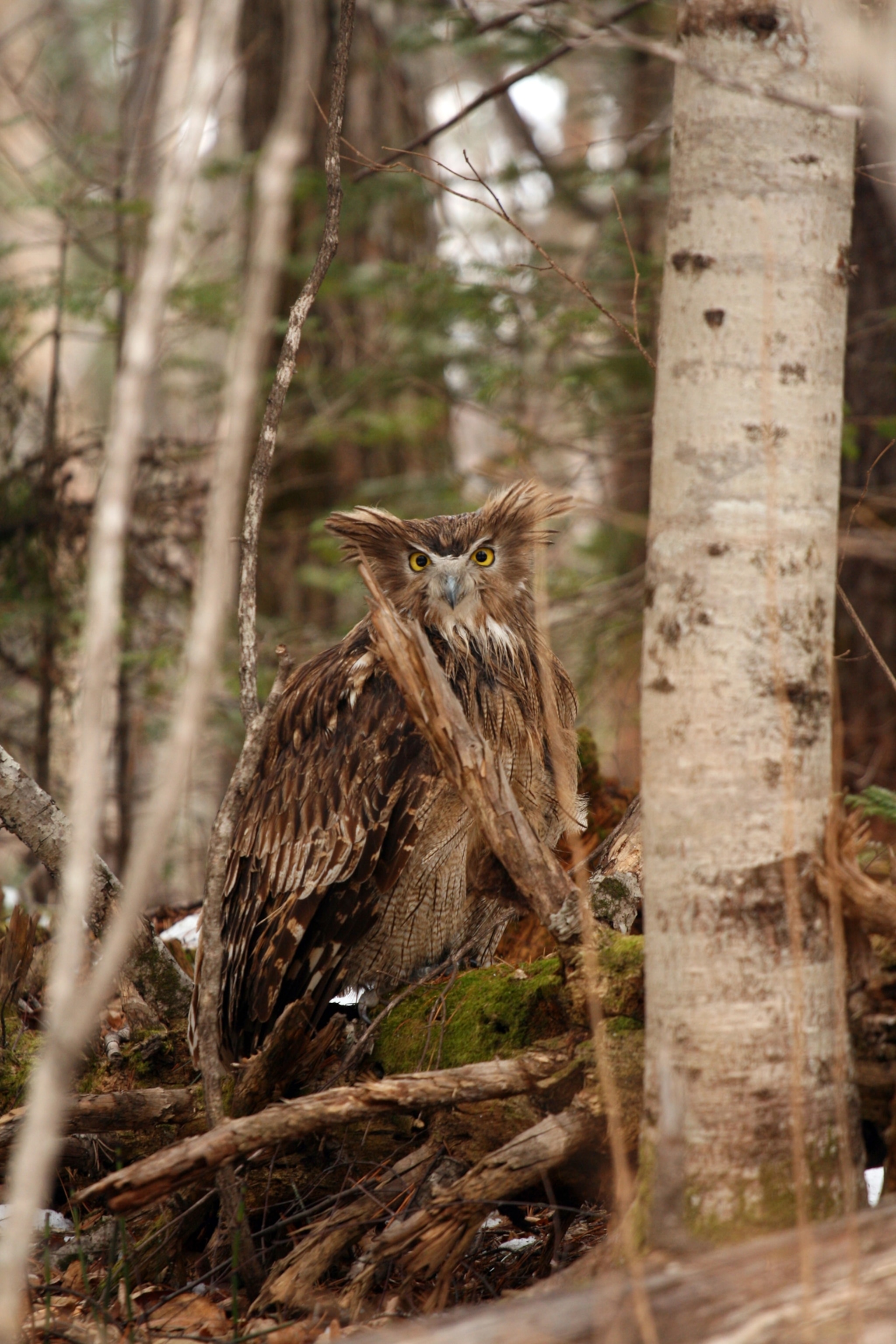 Found throughout Russia and parts of Asia, Blakiston’s fish owl is declining due to habitat loss and climate change.

A female Blakiston’s fish owl, alert and with ear tufts erect, prepares to fly in March 2008.

Sitting motionless on a fallen tree trunk, Rada Surmach strained to hear the mournful echo of nesting owls, deep in the Tunsha River Valley of the Russian Far East.

In the twilight, she finally heard it: The duet of the Blakiston’s fish owl, an endangered species whose six-foot wingspan makes it the world’s biggest owl.

These haunting duets, rare among owl species, reinforce pair bonds. It’s as if the male is calling out to his mate, “I’m here!” to which the female responds in a lower tone, “I’m here too!”

Perched high in the forest canopy, fish owl pairs perform a four-note duet of synchronized calls that can last up to two hours. These raptors, known for their intense yellow eyes and showy ear tufts, nest in cavities of old-growth trees among the wooded river valleys of the Russian Far East, where boreal and temperate rainforests meet the Sea of Japan and the Sea of Okhotsk.

In Hokkaido, people put out food for the Blakiston’s fish owls and manage their populations; in Primorye Province, the mated pairs that remain—fewer than 200—are truly wild. The global population of the owls is estimated at 1,000 to 1,900 individuals.

Rada Surmach, a Ph.D. candidate and researcher at the Federal Scientific Center of the East Asia Terrestrial Biodiversity in Vladivostok, has created a long-term conservation plan to reintroduce captive-bred fish owls to the Land of the Leopard National Park in southern Primorye, a relatively developed region where the fish owl once lived.

Surmach believes that the impressive bird of prey has potential as a flagship species for raising public awareness, similar to the role played by the Siberian tiger, or Amur tiger.

“Every time I explain this is the biggest owl and it lives in our forest,” she says, “people get really excited.”

True to their names, fish owls hunt for salmon, trout, and lamprey in icy rivers during the winter. Come springtime, the male fish owl adds amphibians to the menu to feed his mate and their single fluffy hatchling.

A changing climate could shift spring’s arrival, causing frogs to emerge too early or too late to sustain hungry fish owl chicks, says wildlife biologist Jonathan C. Slaght, the Wildlife Conservation Society’s Russia and Northeast Asia coordinator. The results of such a shift—called a trophic mismatch—could be catastrophic, starving owlets to death and contributing to an eventual population decline, says Slaght, who published the book Owls of the Eastern Ice: A Quest to Find and Save the World’s Largest Owl in 2020 with the hopes of raising public interest in this unique owl.

Bumps in the road

Today, by far the greatest problem for Primorye’s fish owls are logging roads, according to Slaght. These roads are legally built, but since the 1980s, the number of roads has grown more than 17-fold. Although fish owls mostly nest in tall, dead trees of no commercial value, logging roads allow people such as poachers, illegal loggers, and pine nut collectors access to more remote parts of the forest. (Read why birds matter, and are worth protecting.)

Such intruders can pose a serious threat to fish owls and other endangered species, for instance by hitting animals with their vehicles or causing accidental wildfires.

Owls are found in every corner of the world. One thing they all have in common? Exceptional vision and hearing.

In addition., loggers often tear down old-growth trees favored by nesting fish owls to build impromptu bridges through the forest. To encourage logging companies to find other alternatives, Slaght and Sergey Surmach—Rada Surmach’s father, who has studied fish owls for three decades—completed a five-year study on fish owl habitat in 2010.

The scientists advised logging companies to steer clear of certain old-growth tree species, such as elm, chosenia, and Japanese poplar, and instead harvest more common trees not used by fish owls, such as Dahurian larch and aspen. They also urged logging operations to block unused roads with berms to keep out illegal loggers and poachers. Even if the roads aren’t blocked permanently, such closures give wildlife a reprieve, says Slaght.

TerneyLes, the biggest logging company operating in Primorye, did not respond to two email requests for comment about its role in owl conservation.

Walk on the wild side

On the positive side, conservationists say, Primorye has already protected about 10.8 million square miles, or 17 percent, of its total landmass, either in federal or local preserves. Just in the last 15 years, the province has established four new protected areas totaling about 6,100 square miles.

The province’s government also has a long history of environmental stewardship and collaboration with conservationists, particularly in regards to Siberian tigers and Amur leopards, says Victor Bardyuk, director of the Land of Leopard National Park.

“The preservation of these animals, including Blakiston’s fish owl, is a vivid example of people’s attitude to nature and the effective work of the state to preserve it,” Bardyuk says. (Take a look inside Russia’s wildest nature reserves.)

He adds that logging prohibitions in “high-status protected areas,” setting quotas for timber, and satellite monitoring of logging activities have helped protect the critically endangered Amur leopard, which only numbers around a hundred wild animals.

Svetlana Soutyrina, the director of Sikhote-Alin Biosphere Reserve, Primorye’s largest protected area, says her reserve has greater control over illegal timber trafficking and poaching in recent years. And the involvement of nonprofits such as the Wildlife Conservation Society, WWF Russia, and the Amur Tiger Center have improved conditions for the region’s wildlife—including the fish owl.

Though it’s still years away, Rada Surmach and colleagues hope to launch a captive-breeding program for the owl. That could create an insurance population of animals that could be someday released into the wild. In 2018, the Moscow Zoo launched a Blakiston’s fish owl breeding program, which currently is made up of two B. b. blakistoni females, one in Moscow and another at the Sakhalin Island Zoo.

Such efforts don’t just benefit fish owls. Habitat that remains wild enough to support the bird is more likely to meet the needs of countless creatures, including yellow-throated martens, red deer, brown bear, moose, Eurasian lynx, and many more, conservationists say. (Here’s what we lose when a species goes extinct.)

“Primorye is a place where there’s still wilderness,” says Slaght. “There’s something worth protecting, and it can be done.”

Recalling her first encounter with fish owls in the wild, Rada Surmach says, was akin to discovering fresh tiger footprints in the snow.

“You realize that you are not alone in this forest. There are wild creatures around you," she says. “It’s their forest, and they’re the king here.”