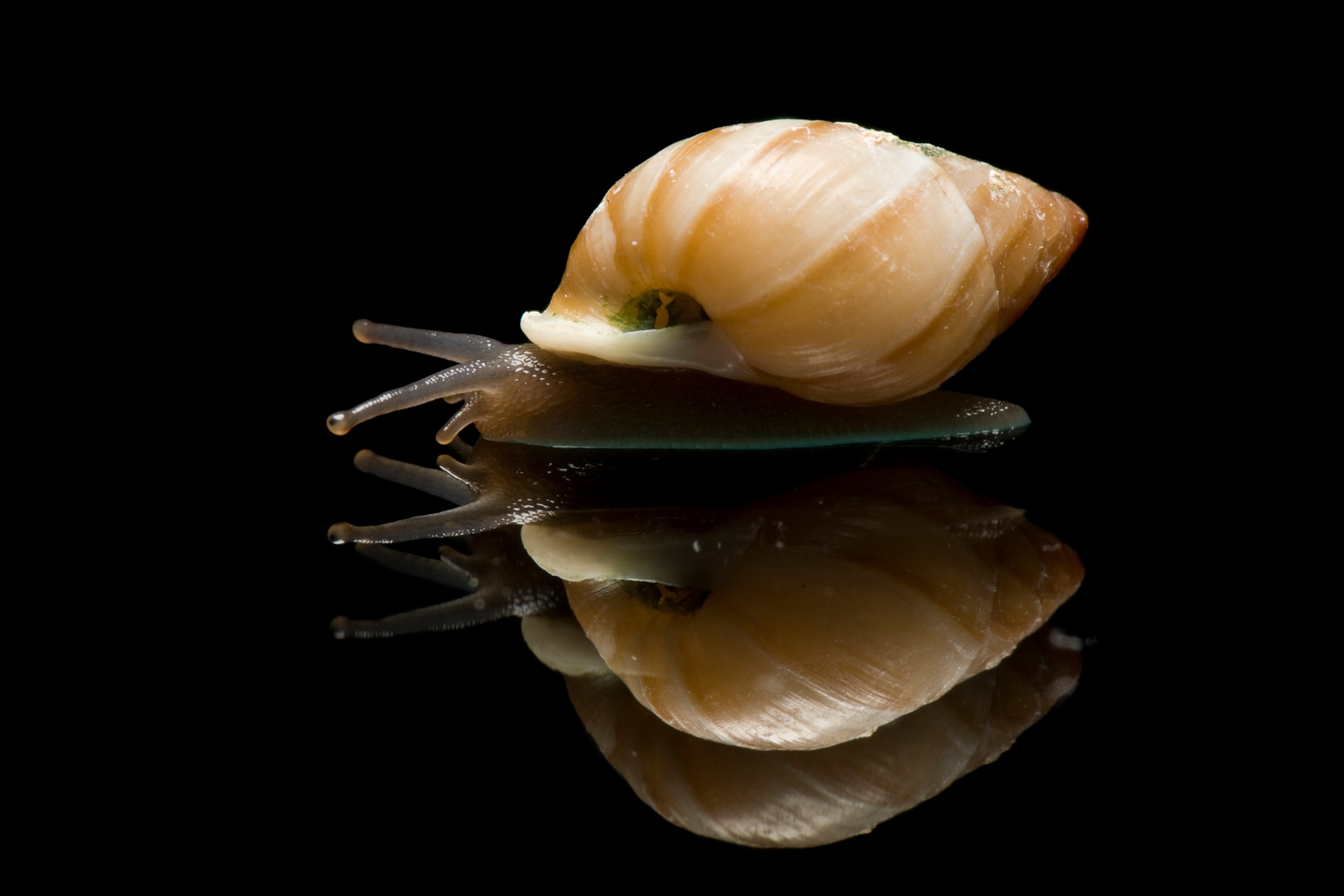 A Partula snail at the Saint Louis Zoo in Missouri.

What is the Partula snail?

Also known as the Polynesian tree snail or niho tree snail, the Partula snail (Partula nodosa) is actually one of several snail species of the genus—all of which are in danger of extinction. This particular species was once a common sight in Tahiti, but now the International Union for Conservation of Nature considers it extinct in the wild as the snail is primarily found in captivity (a few have been reintroduced into the wild, however, and further efforts to reintroduce the snail to its native range are underway).

This tiny snail is not much bigger than a pencil eraser. Its body—most of it a muscular foot—is bumpy and brown, and its antenna-like eyes are almost translucent. A gland in the snail’s foot secretes a mucus that creates slime trails, which help the snail glide across and stick to surfaces. The mucus also lubricates the snail and contains a special protein that absorbs moisture. Beige- and cream-colored stripes cover the snail’s spiraled shell, which protects the snail from predators and prevents it from drying out.

The valleys and moist forests of Tahiti in the South Pacific are ideal habitats for the Partula snail. This land snail often sticks under the stems and undersides of leaves. Being a detritivore, the snail gets its nutrients primarily from eating rotted vegetation. It spends most of its time grazing on decayed plants and microscopic plants that it finds on larger flora. Before it became extinct in the wild, the snail was a valuable asset to its ecosystem due to its ability to recycle nutrients from plant debris and support plant respiration.

When it rains, the Partula snail comes out at night to eat and mate. This snail is a hermaphrodite with both female and male sexual organs. If it cannot find a partner, the snail can self-fertilize to reproduce. This species gives birth to live young, which are a mere .04 to .08 inches when they’re born—about the size of a ballpoint pen tip. Every month to six weeks, the snail births a single offspring, which will reach sexual maturity in three to six months.

Partula snails went extinct in the wild because of another snail species—or rather, two. In 1967, the French Polynesian government allowed the giant African land snail to be imported and used as a human food source on islands of the South Pacific, including Tahiti. Some of the snails escaped, howeverm, bred rapidly, and began eating away at crops on local farmland.

In an effort to control this invasive snail’s growing population, another species was introduced to the island a decade later: the rosy wolfsnail (Euglandina rosea), also known as the cannibal snail. Living up to its nickname, this carnivorous snail preyed extensively on the Partula snail—which, being smaller and slower than the giant African land snail, was an easier meal to catch—nearly driving it to extinction. By the 1980s, researchers were unable to find any live Partula snails in its native valley habitats.

The Partula snail wasn’t the only species threatened by the rosy wolfsnail—some 51 other Partula species went extinct as a result of predation. In an effort to save the remaining Partula snails, an international conservation initiative began in 1986, and Partula nodosa joined breeding programs in North America and Europe.

Today, almost all Partula nodosa live exclusively in captivity. After the snail went extinct in the wild, the Detroit Zoo was the only known location in the world where the snail resided. Approximately 6,000 decedents of the Detroit snails now live in zoos across North America—but several of them, like the St. Louis Zoo, are also breeding and introducing the snail back to its native Tahitian habitats. Some live on a predator-proof reserve as the main challenge remains in finding ways for Partula nodosa and the rosy wolfsnail to coexist.