With their vast, icy landscapes and long periods of darkness or daylight, the polar regions can appear pretty much the same. But they’re actually worlds apart.

Antarctica is an ice-covered continent in splendid isolation at the bottom of the world, surrounded by oceans teeming with life. At the top of the planet, the Arctic is made up of the Arctic Ocean and other bodies of water, all located near the highly populated continents of Europe and North America. The Arctic is also characterized by an ice cover that fluctuates with the seasons.

These unique characteristics are reflected in the wildlife living in each place. Some species, like polar bears, evolved to hunt and breed on the ever-shifting ice pack of the Arctic, while other types of closely related species, such as ringed seals and Weddell seals, have adaptations specific to life in the north or south. And one incredible animal—the Arctic tern—lives at both ends of the Earth, thanks to the longest known migration on the planet. (See amazing pictures of animals in the coldest places on Earth.)

Polar misconceptions and myths abound, so we’re setting the record straight on what cold-dwelling creature actually lives where.

There are no penguins in the Arctic or the South Pole.

One of the most common mistakes is that penguins live in the Arctic. In fact, this penguin-free region is home to another charismatic bird—the Atlantic puffin. These colorful birds dress up their black and white plumage with an orange, parrot-like beak and feet.

Like penguins, puffins are excellent swimmers and divers—equipped with waterproof feathers and an ability to drink seawater—and breed in large colonies along the shore. (See the real story behind the amazing photo of a puffin gorging on fish.)

Unlike penguins, however, puffins can fly at an astounding 55 miles per hour, which helps them quickly bring fish back to their young nesting ashore. (The Arctic’s own flightless bird, the great auk, was killed off in 1844.)

As the coldest, driest, and windiest place on Earth, Antarctica is mostly a huge, lifeless desert. Its largest land animal is a wingless midge, Belgica antarctica, whose adults live about a week.

That's because penguins, which are plentiful along the Antarctic coasts—particularly the Antarctic Peninsula and the Ross Sea—are considered coastal animals, not land dwellers.

So, despite what you may see in cartoons and other popular media, there are no penguins at the South Pole.

The Arctic has several land predators.

When it comes to Arctic predators, there’s one beast that rules them all—the polar bear. These giant ursines range widely across the region and live year-round as far south as James Bay, which is at the same latitude as London.

Ice is essential to polar bears, which use it as a hunting platform for catching seals when they surface to breathe. “Put simply, polar bears have just evolved to take advantage of the richest food source available … seals,” says Ian Stirling, emeritus scientist at Environment Canada and adjunct professor at the University of Alberta. (See incredible photographs taken at both poles.)

The Arctic boasts other land predators, including the Arctic wolf, a subspecies of the gray wolf, and the Arctic fox.

Meanwhile, “the south has no terrestrial predators,” says Andrew Derocher, an ecologist at the University of Alberta.

With such an inhospitable interior, Antarctic wildlife instead thrives in, out of, and around frigid ocean waters.

“In the whole of Antarctica, the ocean is the really productive, biodiverse realm. There are loads of species and very high abundance in places,” says Phil Trathan, head of conservation biology for the British Antarctic Survey.

Antarctic waters brim with krill, a tiny crustacean that feeds large whales, including blue, humpback, and minke whales, as well as penguins.

Penguins are synonymous with Antarctica, yet only emperor and Adélie penguins are permanent residents of the continent. Other species, such as chinstrap, gentoo, and macaroni, breed on the Antarctic Peninsula or sub-Antarctic islands. Adept swimmers that chase after krill, fish, and squid, penguins have no need to fly thanks to a lack of natural predators on the Antarctic ice. (Read about penguin mega-colonies discovered in Antarctica.)

In the ocean, though, penguins most contend with leopard seals, formidable hunters that specialize in warm-blooded prey. Interestingly, leopard seals also eat krill: They have “large canines for predation on birds and mammals, and modified sieve-like teeth for filtering krill out of the water,” says Regina Eisert, an Antarctic research scientist at New Zealand’s Kosatka Consulting.

Narwhals only live up north.

Dubbed the unicorn of the sea due to their long, spiraled tooth, narwhals are a beloved Arctic animal that, like other porpoise species, can be spotted swimming in groups of dozens or even hundreds of animals.

The narwhal is a year-round Arctic resident, summering in ice-free coastal waters. When faced with impenetrable coastal ice, these marine mammals move offshore, into deeper waters, to feed under shifting pack ice. They use cracks and openings in the ice to breathe. (Read more about the mystery of the sea unicorn.)

There are no sharks in Antarctica—but plenty in the Arctic.

Antarctica’s waters are too cold to sustain sharks, but half a dozen or so species ply the Arctic seas. The Greenland shark is one of the most mysterious: A live specimen wasn’t photographed until 1995. The predators, which have a life expectancy of at least 272 years, eat whatever they catch or scavenge, from unwary fish or seals to carcasses of polar bears or caribou.

Some fish do live in Antarctica, such as notothenioids, which produce their own “antifreeze,” proteins that bind to ice crystals in their blood to prevent them from freezing solid. The icefish species Chaenocephalus acteratus are also notable as the only vertebrates with no red blood cells; their white blood gives them a ghostly appearance. (Read about a new species of see-through fish discovered in Antarctica.)

Orcas, or killer whales, live in many oceans worldwide, including those around Arctic and Antarctica. About 70,000 orcas live in southern waters, where they specialize in different foods. Type A orcas eat whales and elephant seals, Type B eats seals and penguins, and Type C preys on fish, says Eisert.

Eisert has observed Type C orcas swimming at least a mile under a sheet of ice—a risky behavior for air-breathers. These orcas appear “to have exceptional navigational skills for making [their] way through the ice,” she says. (See exclusive footage of rarely seen Type D orcas.)

Both polar regions boast numerous seal species that breed on the ice attached to the coastlines, known as “fast ice,” each spring.

With no surface predators, Antarctic seals thrive—perhaps why they number half of all the world’s pinnipeds. In the Arctic, on the other hand, seals are aware of their place on the food chain—a notch below terrestrial predators like polar bears, foxes, wolves, and humans.

Stirling has compared the lifestyles of Antarctica’s Weddell seals and their ecological counterpart in the Arctic, ringed seals. “The most observable difference is that you can walk up to a seal lying on the ice in Antarctica because there are no terrestrial predators to fear,” he says. In the Arctic, you can't walk closer than about 300 feet to a ringed seal before it flees.

Weddells also birth their pups right on the ice, while ringed seals hide them in a snow-covered lair.

One animal migrates between poles. 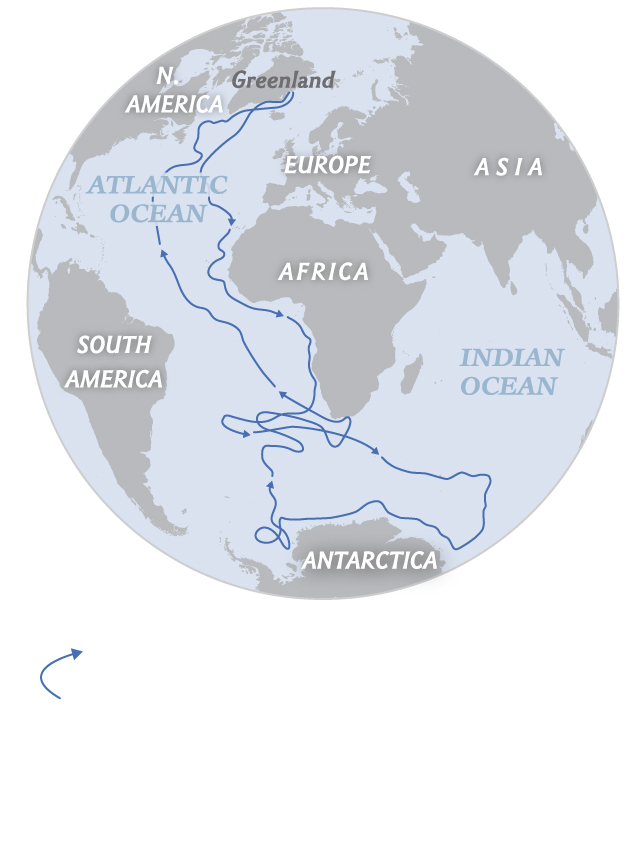 Migration route of an Arctic tern

Some arctic terns migrate pole to pole for breeding and wintering, the longest yearly migration of any bird.

The Arctic tern has the longest commute in the world: About 44,000 miles each year on a roundtrip migration between Greenland, where it breeds, to Antarctica. (Read more about great animal migrations.)

It's unknown why the tern travels so far, but there’s no question it’s perfected the journey: A single bird can easily fly 1.5 million miles, or three roundtrips between Earth and the moon, in its 30-year lifetime.

Now that’s what you call a long commute.