New technology, treatment and education aid the fight in the Democratic Republic of Congo against the deadly disease.

A World Health Organization team checks the temperature of Confirme Masika Mughanyira, 7, in Vayana town, a small village two-hours from Butembo in the Democratic Republic of Congo. Confirme lost both her parents, her older brother and younger sister to Ebola. As the only survivor in her family she is now being taken care of by relatives.

New technology, treatment and education aid the fight in the Democratic Republic of Congo against the deadly disease.

From childhood, Mulyanza Huguette was strong and lithe and loved to run long distances near her home in Butembo, in the North Kivu region of the Democratic Republic of Congo (DRC). She also loved working with children, so when she enrolled in Butembo’s Assumption College, she studied early childhood education.

Huguette graduated from college in July 2018—and a month later, the World Health Organization officially declared that North Kivu was experiencing an outbreak of Ebola. So Huguette’s dream shifted: She went to work for UNICEF to educate communities about Ebola—how the viral hemorrhagic fever spreads, how early treatment can arrest it, and how delaying treatment can be fatal.

In this central African nation of some 81 million, Huguette’s just one of many caught between the promise of new anti-Ebola measures and the barriers to their success: fear and ignorance of the disease, mistrust of foreign-run medical relief efforts, and general unrest fed by armed militias, poverty, and despair.

The continent experienced the largest Ebola epidemic in history from 2014 to 2016, when more than 11,000 people died in several West African nations. By mid-2018 when the virus emerged in the DRC, medical specialists had learned more about it, and had new therapies to try. Educators like Huguette could offer hope: If people sought treatment early, they could recover.

Ebola in the Democratic

Republic of the Congo

Cumulative number of cases and deaths 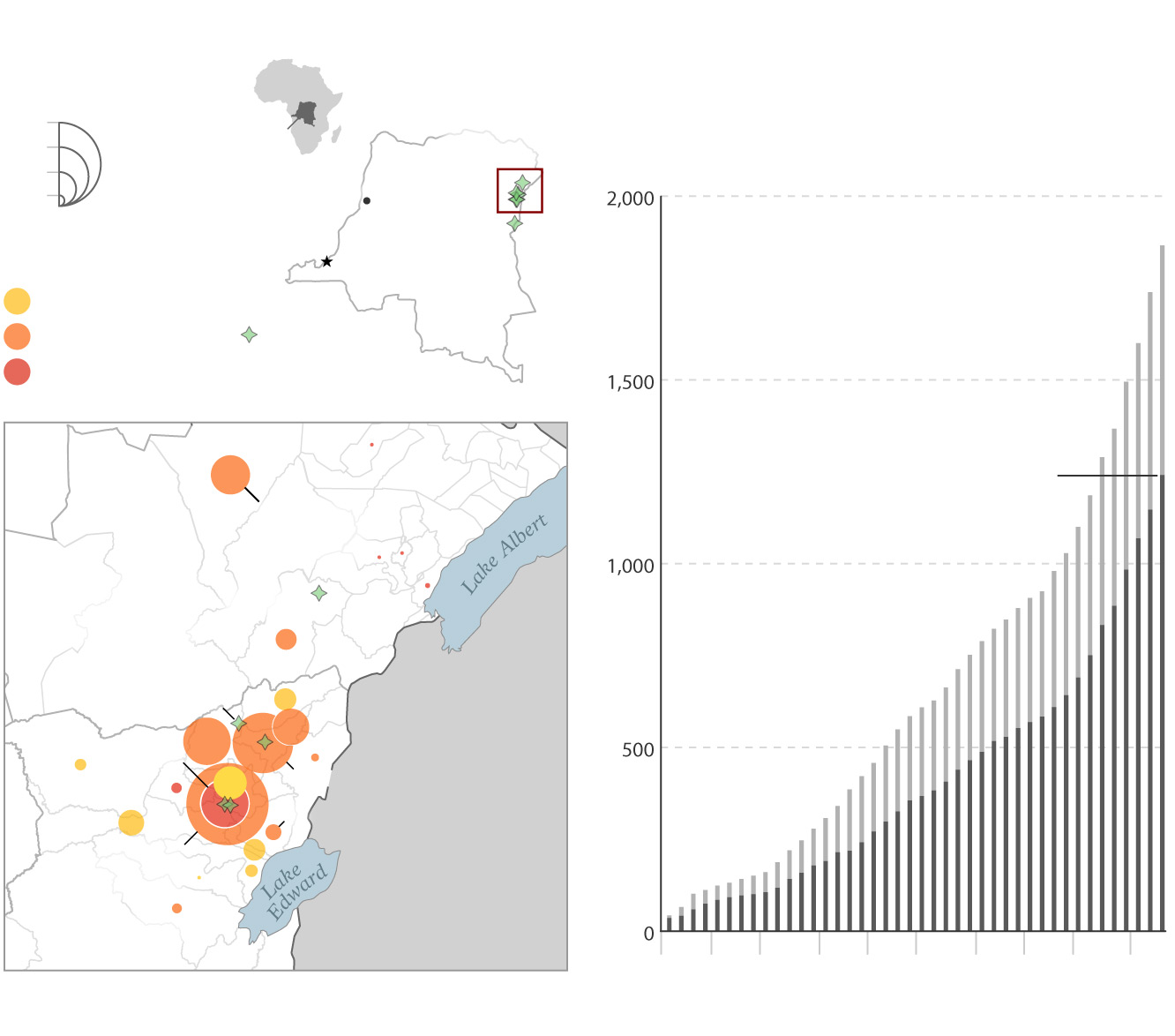 Ebola in the Democratic Republic of the Congo

Cumulative number of cases and deaths

But optimism can be hard to sustain in the DRC, a country that has known conflict and instability for decades—and has suffered through 10 Ebola outbreaks in 40 years. Ebola victims’ families have attacked health workers who attempt to take victims’ corpses for safe disposal. Infectious disease has been hard to corral with so many Congolese on the move, traumatized and displaced by some 50 armed militia groups operating in the DRC. Those groups are bent on disrupting the activities of medical aid workers, outsiders who they suspect have either imported Ebola as a weapon, or who are somehow making money from it. Mistrust has kept many ill Congolese from getting help, with predictable results: By the end of 2018, the DRC Ebola outbreak was the second-largest on record.

During 2018 year-end holidays with her extended family, Huguette felt exhausted. She was helping cook and prepare for New Year’s festivities when what she calls “le très terrible mal de tête’’—the truly terrible headache—began pounding like a hammer inside her head. It lasted for four days. Then came the fever, 102.2F. That's when her family—including uncles and aunts who are doctors and nurses—rushed her to a Butembo hospital.

Huguette was told she had malaria, and received the customary quinine treatment for five days. Only when a doctor from the World Health Organization visited, and asked for a sample of Huguette’s blood, was the correct diagnosis made: Ebola.

She doesn’t know how she contracted it; she’s never cleaned a dead body or participated in funeral rites. But she’s been to funerals—many funerals. She’s sat next to people who have handled the bodies of their loved ones. She’s held their hands, and hugged them.

How she got Ebola isn’t important, Huguette says, but this fact is: She was cured quickly because she was diagnosed early, before the bloody diarrhea and vomiting and the violent abdominal cramps. After a week of treatment at the Itav Ebola treatment center in Butembo, she was healthy enough to go home. In her survival, Huguette sees the power of medical science advancing, no matter the obstacles in its way.

On the day that I spoke to Huguette for this story, armed men attacked the Butembo treatment center where she had been a patient. The men killed a police officer trying to protect the facility and wounded several health workers. Less than a month before that, a Medicins Sans Frontieres (MSF) treatment center in the nearby town of Katwa had been torched on February 26, killing one health worker, injuring another, and causing the global medical NGO to suspend services.

Outside medical personnel have brought a potentially game-changing tool to this Ebola outbreak: A vaccine developed by Canadian scientists, and tested in the West African outbreak in 2015. By mid-April, more than 100,000 vaccinations had been administered to people in close contact with Ebola patients—such as relatives and health care workers—and a WHO report said the vaccine appeared to be highly effective in reducing Ebola deaths.

Such promising news, though welcome, hasn’t stopped the beleaguered citizens of North Kivu from questioning the arrival of all of the white United Nations trucks and foreign medical organizations.

In Butembo, which has more than a million people, nearly 90 percent are members of the Nande, an ethnic group that’s traditionally skeptical of outsiders. The city also has its share of community-based armed groups, who use propaganda as well as force to influence in the chaotic, impoverished areas where they live. Some are known to spread disinformation about the Ebola treatment centers and the aid groups that support them, such as MSF and the International Medical Corps. Ultimately, medical “outsiders” are condemned for things they must do—enforcing quarantine for Ebola patients, imposing burial policies that flout local customs—and accused of things they often didn’t do.

Over a cup of Nescafe in the improbably named Hotel Versailles in Butembo, a young man named Joffa offered his theory about why Ebola treatment centers were being hit with violence. “When my uncle got sick, and they thought it was Ebola, armed men showed up at his house,” Joffa explained in his halting English. “They tore up everything, before they took him away. They took things, we don’t even know all the things they took. They use (Ebola) as an excuse to do whatever they want.”

In the DRC, “What you have is a group of people who are moving a lot, many to escape the trauma they have experienced from armed militia groups,” says Dr. Michel Yao, an emergency operations program manager for the World Health Organization. “Secondly, you have people who are not open to foreigners because they have really no experience with them, and they have never experienced anything like Ebola.” Although medical relief agencies “learned many lessons from the West African outbreak,” Yao says, “the particular context of [the DRC outbreak] makes it enormously challenging.”

About 90 minutes from Butembo, in the city of Beni, the mood is different.

A mix of ethnic groups have historically lived peacefully together in the area around Beni, which is near the DRC’s border with Uganda. In fall 2018 when a second wave of the Ebola outbreak emerged centered in Beni, medical workers met resistance, says the WHO’s Yao: “It was people refusing the safe burial practices. It killed many people from the same family, and from that family it spread out.” To help overcome the resistance, the WHO and partners recruited local residents to be trained as community outreach volunteers and medical assistants. That helped lessen the mistrust and allowed medical staff to get slightly ahead of the viral spread.

At the entrance of L’hopital General de Reference de Beni, the people I see queued up seemed calm and resigned to the disinfectant drill: washing their hands with chlorinated water and having the soles of their feet sprayed with the same. Many were there to report to work—scrubbing boots, gloves, and other medical equipment, or cooking meals—or to visit patients in a series of Biosecure Emergency Care Units for Outbreaks (acronym: CUBE), used by The Alliance for International Medical Action. These are plastic isolation units designed for the treatment of patients suffering from highly infectious diseases with serious potential for outbreaks. If you saw the John Travolta movie “The Boy in The Plastic Bubble,” imagine that in multiples.

Anthony Bonhommeau, who works for the non-governmental organization (NGO) that developed the CUBEs, says the idea was shaped by experiences in past outbreaks. “One of our teams started to think about how we had isolated the patients,” he says: in quarantine units where it can be difficult for medical personnel to reach patients for care and monitoring, and where patients and loved ones may barely glimpse each other.

The ideal treatment setting would allow individual attention to Ebola patients and interaction with them, any time it was necessary, that was safe yet more personal. Collaborative research among groups like the Red Cross, the International Medical Corps, MSF, academic institutions, and technology companies resulted in the development of the CUBEs, Bonhommeau says. “We can monitor patients 24 hours a day, and they can talk to you at any time, and we can monitor them with biomedical tools through the use of the gloves and the barriers that reach inside the cubes.”

Once CUBE-dwelling Ebola patients have completed the critical phase of treatment and gained strength, they receive psychological counseling. Then they can come out and interact with other recovering patients in a garden area outside the plastic units where they’re visible to their families from a distance. When family members are able to see the patient, not only through the CUBEs but moving about outside of them, it eliminates some of the fear, gossip and rumors about what’s going on inside of Ebola treatment centers, health officials say.

Mulyanza Huguette knows that many people in the DRC don’t like or trust the foreigners setting up tents and carrying their relatives off for care. But Huguette is working to change that, in part by telling her own story. Instead of panicking when she was diagnosed, her family, friends and boyfriend realized there was nothing to fear if she got early treatment, she says. And her story has a decidedly happy ending. If she’d contracted Ebola even a few years ago, her family might have been planning her funeral. But instead, today she’s planning a future which she hopes will include an NGO career, a husband—and five children.