As the Amazon burns, cattle ranchers are blamed. But it’s complicated.

After working in the Amazon for more than 20 years, a National Geographic photographer questions who is responsible for the fires and deforestation.

After working in the Amazon for more than 20 years, a National Geographic photographer questions who is responsible for the fires and deforestation.

Buxo turned to me and said, “you do it.” I considered for a second and shook my head. “No” I replied, “you do it”. I wanted to be involved but not implicated. I was nervous, my heart was racing. Buxo was excited, unable to stop grinning. At his feet, a black, shiny smear lay across the leaf litter. A few sprays of gasoline and oil mix, from the old mineral water bottle he clutched in his left hand. He shook his head at me mockingly, bent down and sparked the smear with his lighter. It instantly leapt into flames as he pulled his hand back. Within a few seconds the flames spread beyond the oil, consuming the surrounding leaves and licking the dead branches above. A minute later they were ten feet tall, slithering and clawing their way up trees and through the tangle of tinder dry branches and twigs that lay thick on the ground. This moment had been planned a year or more in advance. The trees had been felled, left through the wet season to dry in the dry season.

Dino, Buxo’s father, whooped with excitement and shouted to me over the popping and crackling of the fire. “In a few years we’ll have cows here,” he said. I tried to take a few photos of him but the fire had become intense. My camera shielded my face from the heat briefly, but then the hairs on my fingers curled as my hands began to burn and I had to leap back. It is almost indescribable, the feeling of standing next to a large and rapidly growing forest fire. The power, the fear, the adrenaline; the unimaginable, face peeling heat that hits you like an invisible wall, that you have no option but to run from. Within ten minutes the whole area was a raging inferno. Dino ran over and ushered me away, into the forest and to safety. (Why the Amazon doesn’t really produce 20% of the world’s oxygen.)

Most fires in the Amazonia region are set to clear land for agricultural purposes. 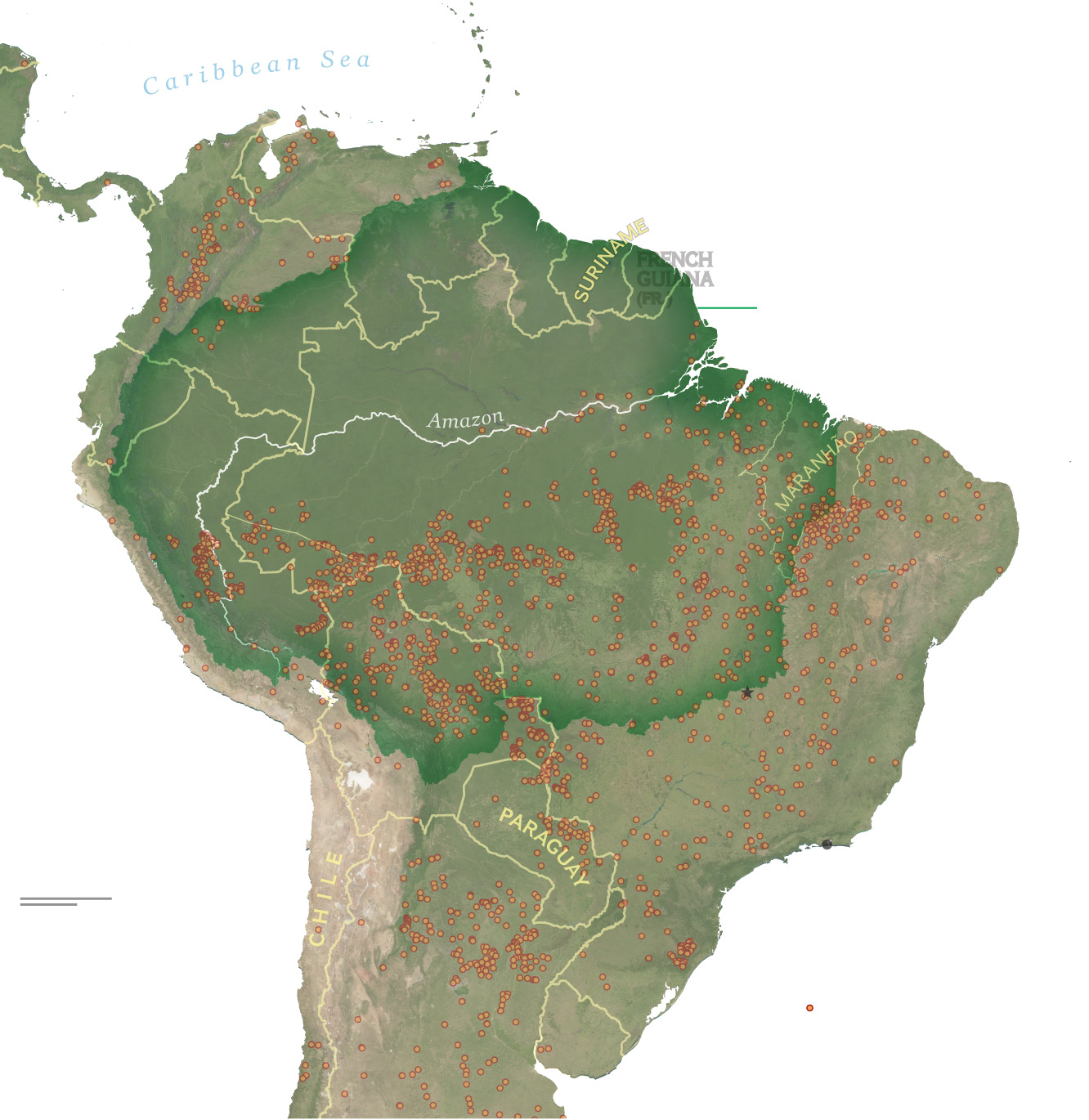 Most fires in the Amazonia region are set to clear land for agricultural purposes.

I had been living with Dino and his family for ten days or so. I wanted to understand how they lived and worked in the rainforest. They were the ‘bad guys’, the slash and burn cattle ranchers, who had ravaged and destroyed much of the western Amazon and had been doing so for decades. I’d moved in with them, worked with them, I’d helped them brand calves, vaccinate cows, slaughter and butcher them, kill pigs, mend fences. My hands were a mess of blisters and dried blood. In the evenings we’d sit around with Dino’s large extended family and talk and laugh as we roasted meat and drank beers. I was seduced very quickly, brought under the spell of some of the warmest, most welcoming people I have ever met. And it occurred to me that if these were the ‘bad guys’ then we had the narrative wrong.

Deforestation has escalated in 2019 resulting thousands of fires blazing across the southern Amazon basin. Data from Brazil’s National Institute for Space Research shows an increase of 85 percent more fires than in 2018. (Map: See how much of the Amazon is burning and how it compares to other years.)

Cattle ranching in the Amazon is perhaps the main culprit of the fires we are seeing now. It is an industry of thousands of small-scale ranchers cutting forest, burning it and turning it to pasture. Fires rage throughout the Amazon every year as a result of this practice. Critically however, they are predominantly man-made fires; different from many of the large fires that ravage Siberia and Alaska which are often natural. As so much forest has been cut, the climate in the region is starting to change, to dry out. This compounds an already destructive practice. On a larger scale the idea of deforesting a rainforest to create cattle pasture is just about the most stupid thing humans can do. Rainforest sequesters carbon from the atmosphere and locks it—that’s good, we need that. At the same time the Amazon’s trees produce oxygen. Remove the trees and burn them and they not only stop producing oxygen, but they release their carbon back into the atmosphere. Put cattle on the land and you replace trees with animals that produce damaging levels of greenhouse gases.

Dino and his family were the most environmentally destructive people I have ever met. They are also some of the nicest. They are a family trying to survive in a very hostile environment through often brutal, hard work. Their view and understanding of the problems the Amazon faces are, therefore, very different than mine. I see the Amazon as an extraordinarily valuable, cathedral of life that should be cherished and protected at all costs—the world needs it, we all need it. Dino sees the Amazon as a vast, regenerating resource that allows him to feed his family. After talking extensively with him I realized his respect for it was as deep as my own, he just saw it very differently. (What happens to wild animals caught in the Amazon fires?)

The morning after the fire I returned to the land. It smoldered, black and grey. Plumes of blue smoke rose from the few tree trunks that remained upright – scorched totem poles, monuments to human stupidity. Ash billowed in clouds from my boots as I stalked between fallen tree trunks, blackened to charcoal, some with their hearts still glowing orange inside. I was upset, I was angry. Did I blame Dino and his family for what they had done? No. If it was me trying to provide for my family in a country with few economic prospects I probably would have done the same. Can we continue to let these practices persist? No.

We should stop eating beef—particularly Brazilian beef. We need to urgently and drastically reduce the pressure on the Amazon before it reaches a tipping point. But what would happen to families like Dino’s if we did that? We can’t and shouldn’t avoid these questions as real people’s lives are at stake; and like it or not these people are also people of the rainforest now. The more we cast the problem as good guys against bad guys the more we indulge in thinking and that achieves nothing, other than to push people and problems further from solution.

The problems the Amazon faces are perhaps starker now than ever before. They are myriad and complex. But they are curable. What we need to do now is decide where and how we appoint and apply values based on sensible economic models that favor both the rancher and the forest. One of the issues facing the Brazilian Amazon now is a loosening of regulations by the current administration which has opened up more land for deforestation and burning. This could be catastrophic, both for the Amazon and the rest of the world.

National Geographic photographer Charlie Hamilton James has worked across the Amazon for the past 20 years, covering issues related to fire and deforestation. His work includes coverage of firefighters during the burning season in the Brazilian state of Maranhão in 2017. He also has documented the lives of isolated tribes. In 2013, he lived and worked with cattle ranchers in western Brazil.