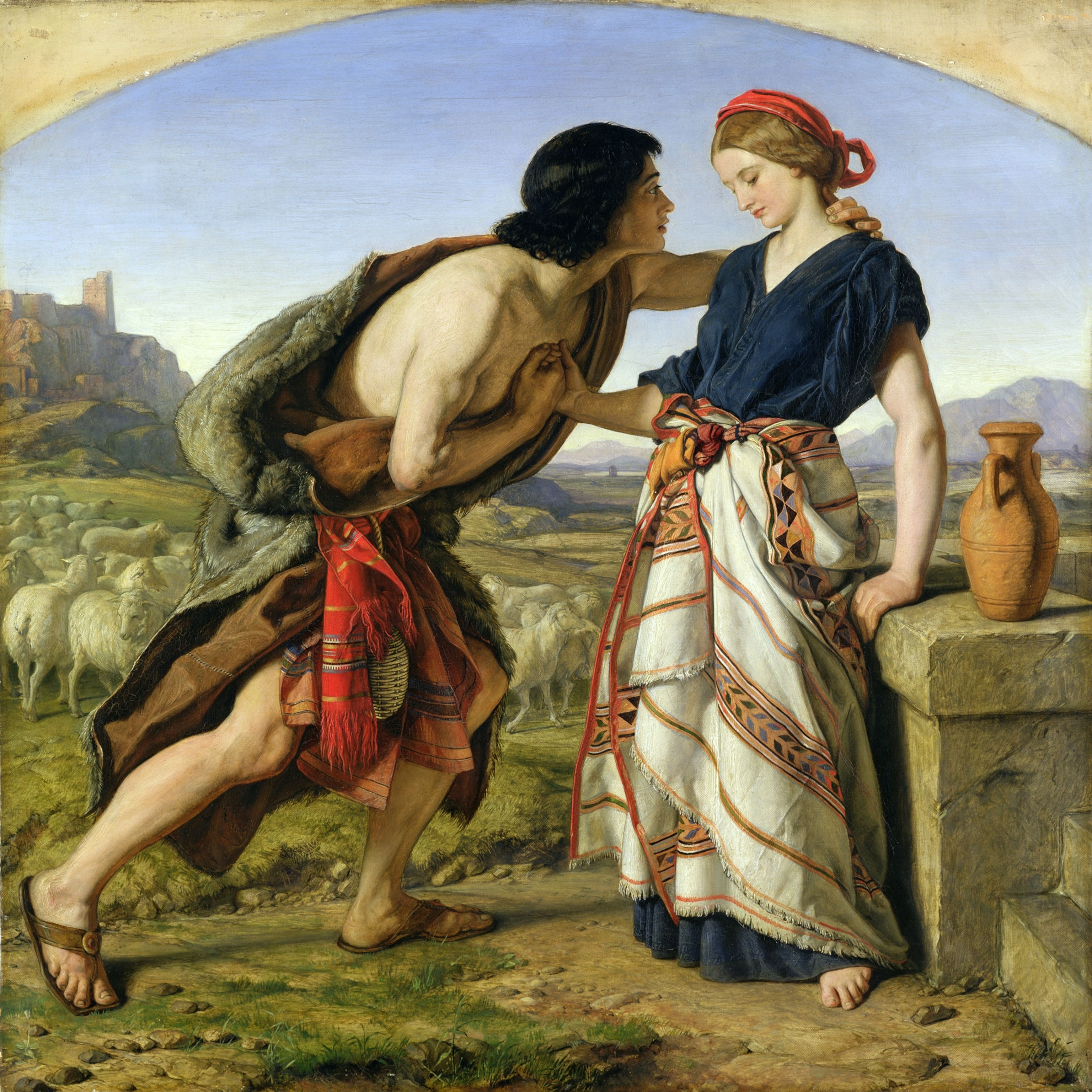 Tricked by his father-in-law into marrying his true love’s sister, Jacob waited 14 years before he could be with Rachel.

When Jacob met Rachel he kissed her and “lifted up his voice, and wept” (Genesis 29:11). Artist William Dyce captures this fateful moment in his mid-19th-century painting “The Meeting of Jacob and Rachel.”
Photograph by Hamburger Kunsthalle, Hamburg, Germany/Bridgeman Images
National Geographic explores notable biblical figures in our ongoing series People in the Bible, as part of our coverage of the history of the Bible and the search for sacred texts.

After stealing his older brother's inheritance, Jacob feared his brother's wrath and fled to Harran. One night, he dreamed of a ladder going up into heaven. At the top stood God, reaffirming his covenant with Abraham that now passed to Jacob: “The land on which you lie I will give to you and to your offspring” (Genesis 28:13). Jacob built an altar and called it bet’el or Bethel (“the house of God”).

Soon after his arrival in Harran, Jacob fell in love with the “beautiful and lovely” Rachel, daughter of his cousin Laban (Genesis 29:17). Laban warmly welcomed him to his family, but asked a steep price for Rachel’s hand in marriage: Jacob would first have to work as a shepherd for seven years, tending Laban’s flocks. The annual wage for a shepherd in the Bronze Age was about 10 shekels; hence, seven years of labor was a stiff demand. But Jacob, a fugitive from Esau, was in no position to bargain.

And Jacob served seven years for Rachel; and they seemed unto him but a few days, for the love he had to her.
ByGenesis 29:20

When the seven years were fulfilled at last, Jacob spent his wedding night only to discover at dawn that it wasn’t Rachel, but her elder sister Leah whom Laban had delivered to Jacob’s tent. Laban explained that according to tribal custom, the oldest daughter should be married first (Genesis 29:26). If Jacob wanted to marry Rachel as well, he would owe Laban another seven years of labor.


In time, Jacob was able to acquire a flock of sheep, camels, and goats of his own. But tensions within the clan, particularly between Jacob and Laban’s sons, compelled Jacob to return to Canaan with his wives and handmaidens, who also served as Jacob’s concubines. By this time, these women had borne him 11 sons and a daughter.

While traveling south, close to the Jabbok River, Jacob came upon a stranger who challenged him to a struggle. The two wrestled all night; the word “wrestled” (ye’abeq) is another of Genesis’ wordplays, using Jacob’s name (ya’aqov) and that of the river (yabboq). At long last, the stranger—an angel of the Lord, or perhaps God himself—relented, and declared that Jacob would be known as “Israel” (“he who prevails with God”) (Genesis 32:28). Just as Jacob had struggled with God, so too would the nation of Israel wrestle for centuries with its obedience to the Lord. Jacob decided to call the place Peniel (“God’s face”), saying, “I have seen God face to face” (Genesis 32:30).

The “unloved” Leah bore seven of Jacob’s children—six sons, Reuben, Simeon, Levi, Judah, Issachar, and Zebulun, as well as a daughter, Dinah. Jacob’s concubine Bilhah gave birth to Dan and Naphtali (Genesis 30:3-8), while another slave, Zilpah, gave him Gad and Asher (Genesis 30:9-13). Jacob’s overt favoritism toward Rachel had prompted God to keep Rachel’s womb closed, but Rachel’s love was ultimately redeemed when she gave birth to a boy named Joseph, Jacob’s favorite (Genesis 30:24-25). Together with the sons of Joseph, Manasseh and Ephraim, these 12 men would become the forefathers of the 12 tribes of Israel, sealing God’s covenant.