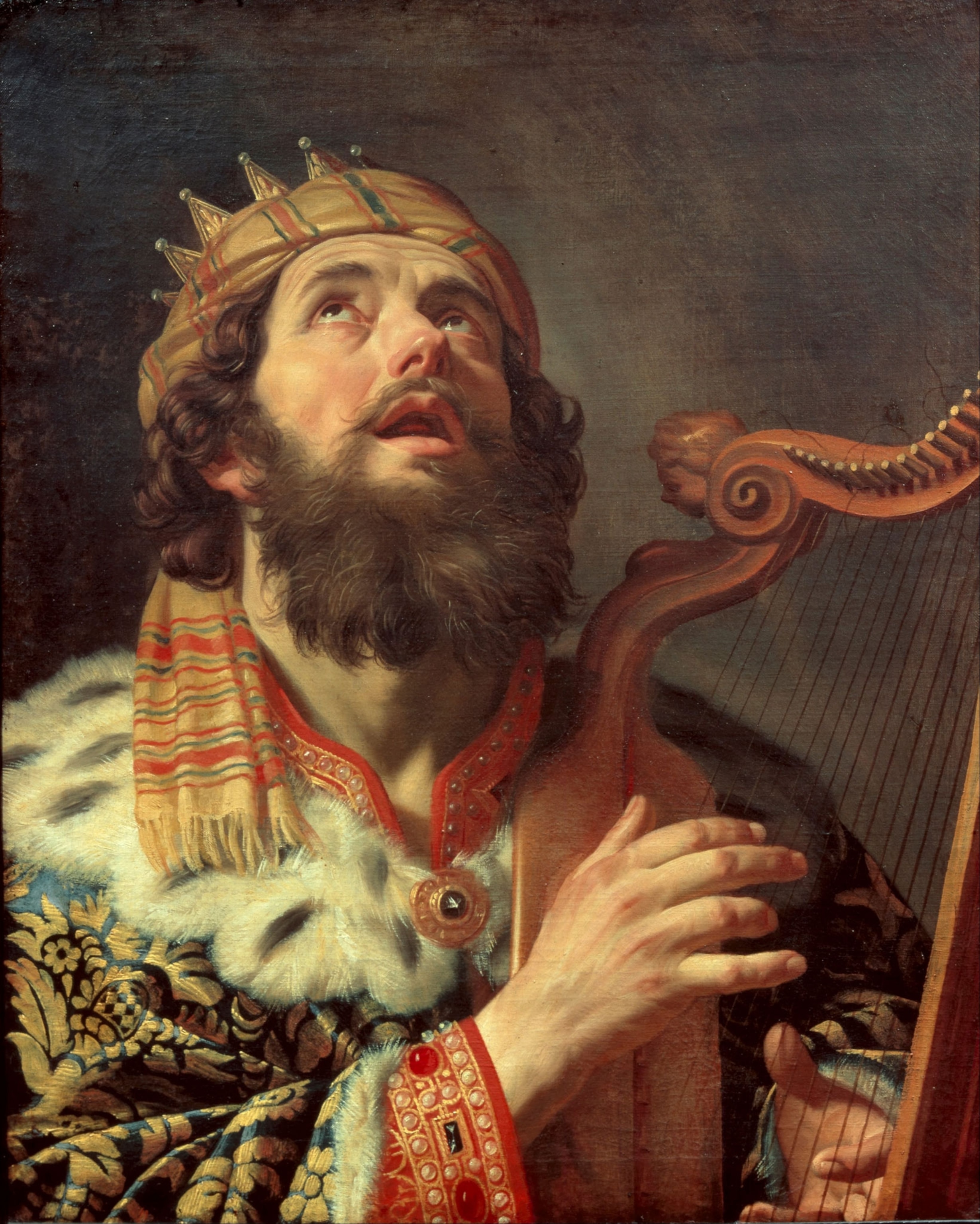 Giant slayer, musician, conqueror, king: How a young shepherd ascended to the throne of Israel.

A talented musician, King David plays the harp in this 1622 painting by Dutch artist Gerard van Honthorst.
Illustration by Fine Art Images/Heritage Images/Getty
National Geographic explores notable biblical figures in our ongoing series People in the Bible, as part of our coverage of the history of the Bible and the search for sacred texts.

King David was not born into royalty. He entered life as a humble shepherd, rose to found a dynasty, and became a central figure in Judaism, Christianity, and Islam.

In the Book of Samuel, Saul, the first king of Israel, failed to reach a decisive victory against an enemy tribe, the Philistines. God sent the Prophet Samuel to Bethlehem and guided him to David, a humble shepherd and talented musician. He brought the young man to Saul's court, where his harp was so soothing that Saul called for David whenever he was vexed by an “evil spirit” sent by God (I Samuel 9:16). Saul was so taken with this young man that he appointed David his armor bearer.

Soon thereafter, a major Philistine battle loomed. This time, the Philistines fielded a fearsome new weapon: a giant named Goliath, carrying a huge bronze spear (I Samuel 17:5-7). The Israelites were frozen in fear—except young David. Armed with only a sling, he picked a stone from a riverbed and slung it at Goliath’s head. David’s aim was true; the stone struck the giant and killed him, prompting the Philistines to flee. The Israelites were jubilant. Saul was compelled to place young David at the head of his army (I Samuel 18:5).

Even though David then married Saul’s daughter Michal and became a close friend of Saul’s son Jonathan, an intense rivalry developed between the young new general and the king. Saul even began to plot to kill him. David had little choice but to flee to enemy territory.

Soon the country was once again torn by war as Philistine forces gathered at Mount Gilboa, and Saul and his sons, all serving as commanders in his army, rushed to meet them. But God had turned against Saul, and the Israelite ranks were decimated. All of Saul’s sons fell to Philistine swords, including his heir, Jonathan. Badly wounded himself, Saul then fell upon his own sword (I Samuel 31:1-7).

With Israel’s army in headlong retreat, the Philistines swarmed over the Hebrew highlands. Saul’s only surviving son, Ishbaal, was anointed as his successor, supported by the northern tribes. But the southern elders went to Hebron, David’s military base, and in due course anointed David king “over the house of Judah.”

At first, David chose to ignore the Philistines and instead marched on Jerusalem (II Samuel 5:6). After capturing Jerusalem, David was then able to defeat the Philistines. Eventually, all of the regions in Canaan came under David’s control.

Now, at last, David could turn his attention to building a state, ruled from a proper Israelite capital. He pitched the tent of the Tabernacle to house the Ark of the Covenant. This was obviously not a satisfactory solution, and the king complained to the Prophet Nathan that “I am living in a house of cedar, but the ark of God stays in a tent” (II Samuel 7:2). An oracle from God assured David that "the Lord will make you a house"—a Davidic dynasty—but that it would be up to his offspring (King Solomon) to “build a house for my name” (II Samuel 7:11-13).

So David reigned over all Israel; and he administered justice and equity to all his people.
By1 Chronicles 18:14

According to the Books of Samuel and the subsequent Books of Kings, David then expanded his territory until Israel had become the dominant state in the Levant, absorbing the nations of Ammon, Moab, and Edom. Modern research has questioned this claim, and many scholars believe that some of the legendary material surrounding David served to exalt him as an ideal king, as successful in peace as in war, beloved by God as well as his people.

Indeed, David’s greatest achievement (and that of his son Solomon) is not the extent of their putative realm, but the fusion of the quarrelsome tribes into one nation. Some scholars have even questioned whether David is a historical figure, though the discovery of a stela from Tel Dan with the inscription bytdwd (which may mean “House of David”) would argue otherwise.

Notwithstanding David’s political achievements, his personal life was filled with conflict and tragedy. David compromised his reputation by pursuing the beautiful Bathsheba, who was already married to Uriah, one of David’s top commanders. David ordered him placed in the front ranks of a planned assault against the Ammonites, where he was duly killed.

As soon as Bathsheba finished her time of mourning, David married her, and she bore his son. But the Prophet Nathan sternly rebuked David for his evil scheming because it had “displeased the Lord,” and indeed, the baby died (II Samuel 11:27). David then repented before God, and in return was promised that Bathsheba would bear him a second son. His name was Solomon. As David grew older and feeble, Bathsheba extracted David’s promise that their son Solomon would succeed him. And so it came to pass.