Kids suing governments about climate: It's a global trend

From Colombia to Pakistan to the Netherlands, kids are claiming a right to a clean environment—and sometimes winning.

When young people in the Netherlands sued their government for inaction on climate change, they unexpectedly won. In a decision noted for its bluntness, the court ordered the government to curb carbon emissions 25 percent by next year.

Another ground-breaking success emerged last year in Colombia, where 25 young people won their lawsuit against the government for failing to protect the Colombian Amazon rainforest. The court concluded that deforestation violated the rights of both the youths and the rainforest and ordered the government to reduce it to net zero by 2020.

And a seven-year-old girl in Pakistan gained the right to proceed with her climate change lawsuit on its merits—establishing, in a first for Pakistan, the rights of a minor to sue in court.

This trio of courtroom victories on three continents has become the foundation of a global legal movement to compel governments to step up and save the planet before it’s too late. Citizens are raising constitutional claims to gain recognition of the fundamental right to live in a healthy environment. Court decisions defending that right have been made in more than 50 nations, where governments have been faulted for a host of environmental sins that range from climate-risky pension fund investments to simply failing to live up to commitments made in the Paris climate agreement.

Legal experts anticipate that the number of new lawsuits will only grow as the scientific prognosis for the impacts of climate change becomes increasingly dire.

“This is a direct response to the fact that we are waking up to the magnitude of the global crisis,” says David Boyd, a law professor at the University of British Columbia and a United Nations special rapporteur on human rights.

Boyd, who specializes in environmental rights, catalogued legal actions among UN member states and concluded that no other social or economic right has spread as quickly through the world.

A People’s Right to a Healthy Environment

There are three mechanisms by which a country can recognize its citizens’ right to a clean environment: 1. constitutional guarantees; 2. national legislation; and 3. adherence to international conventions. On this map we show how many of these mechanisms are available in each country. Countries with none are shown in white and include some of the largest democracies. But a total of 112 countries recognize environmental rights in their constitutions—the strongest guarantee. 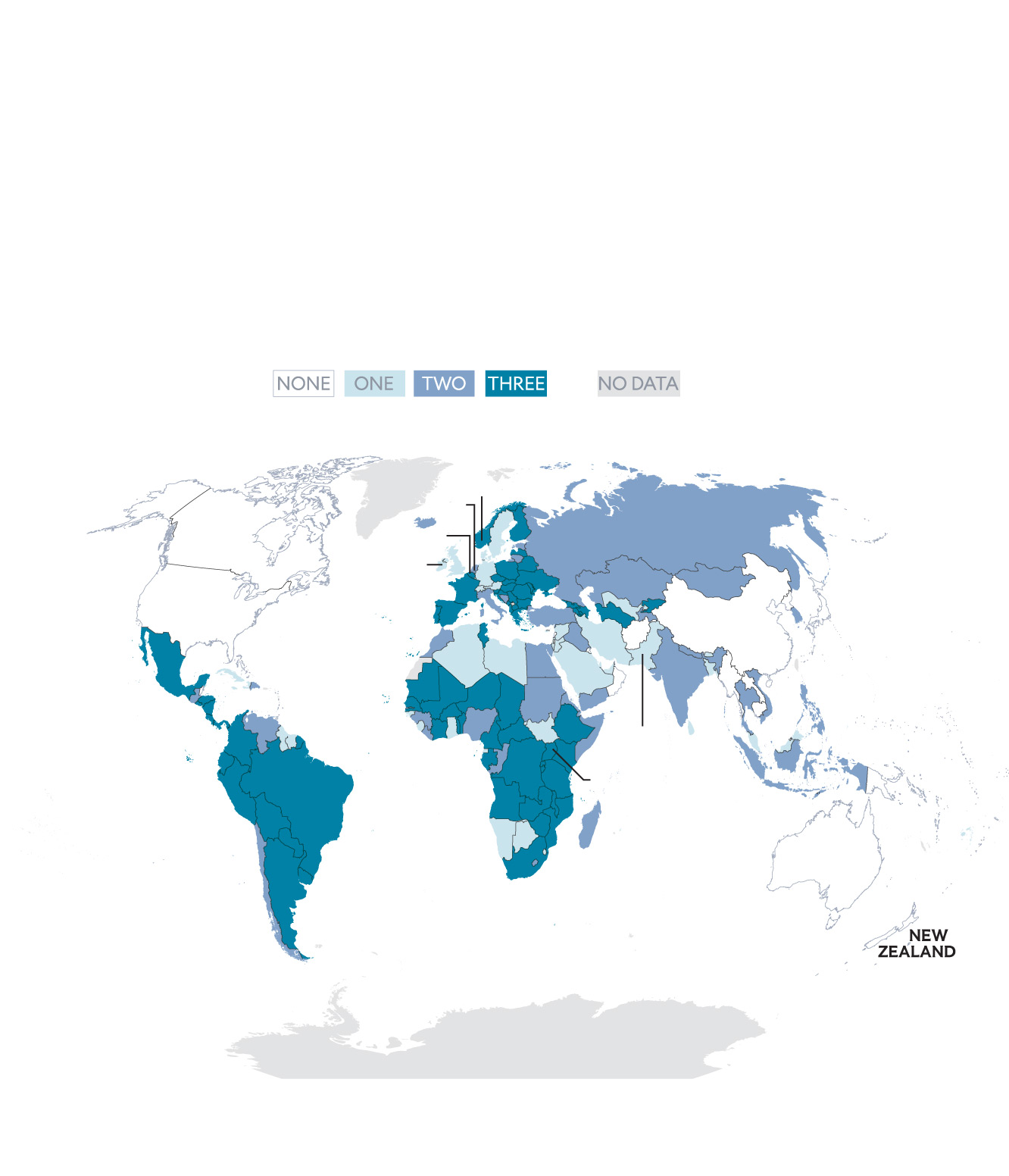 A People’s Right to a Healthy Environment

There are three mechanisms by which a country can recognize its citizens’ right to a clean environment: 1. constitutional guarantees; 2. national legislation; and 3. adherence to international conventions. On this map we show how many of these mechanisms are available in each country. Countries with none are shown in white and include some of the largest democracies. But a total of 112 countries recognize environmental rights in their constitutions—the strongest guarantee.

Once dismissed as a “novel perspective,” the right to a healthy environment is now considered legally established around the world, he says. It is enshrined in the constitutions of more than 100 nations and has been incorporated in legislation, treaties or in other documents of at least 155 nations. Of the court cases based on a constitutional right to a healthy environment, the majority are winning. And, in the cases brought by young people, courts are receptive to recognizing that right for future generations.

“What you see in this rising tide, led by children—who have the greatest stake—of people saying to their governments: ‘You have failed. We have rights and you need to abide by and protect those rights,’” says Carroll Muffett, president and CEO of the Center for International Environmental Law, based in Washington and Geneva.

The seven-year-old’s case in Pakistan builds on the successful outcome of an earlier lawsuit filed by a farmer who claimed Pakistan’s failure to carry out its climate commitments cost him his livelihood. The court found that “the delay and lethargy of the State in implementing [climate policy] offend the fundamental rights of citizens.” The court also ordered the creation of a Climate Change Commission to monitor the government’s progress.

The Netherlands case eventually involved almost 900 Dutch citizen plaintiffs from multiple generations. In 2015 the judges swiftly and overwhelmingly rejected the government’s claim that near-term climate action would be too expensive. The court-ordered remedy requires the government, within a year, to make nearly twice the carbon emission cuts made since 1990. To meet that target, the government has said it would shut down a coal-fired power plant in Amsterdam, slated for closure at the end of 2024, by the end of this year. Meanwhile it has appealed the decision to the Dutch supreme court.

The Dutch case has became the model for similarly fashioned lawsuits in Belgium, Ireland, and Canada, and it has inspired other climate cases in countries as far flung as Uganda, New Zealand, Australia, and Norway. The Colombia case has had a similar impact. When the youths there won their case, Boyd says, “Let me tell you, there were lawyers in 100 other countries saying: how can we emulate that decision? We’ve never had such a globally connected system.”

The exception may be the case in the United States, where judges are traditionally immune from influence from international cases. Juliana v. United States, named for lead plaintiff Kelsey Juliana, now a 23-year-old University of Oregon student, was filed against the Obama administration in 2015, around the same time the Netherlands case was decided. It’s being closely watched for the possibility that it may write new precedents if it survives.

If some see climate litigation as the last chance to slow global warming, critics argue that turning policy and lawmaking over to judges is misguided and will accomplish little more than to spawn the very flood of litigation that advocates predict.

Michael Burger, executive director and CEO of the Sabin Center for Climate Change Law at Columbia University Law School in New York, says the swelling wave of lawsuits should surprise no one, given the lumbering pace of government action. At the moment, the center is tracking 1,039 cases ongoing in the United States and 283 in other countries. The majority of them, unlike the youth cases, involve enforcing existing environmental regulations and law.

“People are taking to the courts because governments are falling short and when you have nowhere else to go, you go to court,” he says.

There are other drawbacks to litigation. Lawsuits move slowly too. The Belgian case stalled for three years over arguments about whether to proceed in Dutch or French; the parties finally agreed on French. Court-ordered solutions can be ineffective or unenforceable.

The decision last year in Colombia, for example, is considered one of the most progressive and powerful in the region. But the court-ordered plan to curb deforestation has so far generated more publicity than government action, says Cesar Rodrigues-Garavito, the plaintiffs' lawyer and founder of Dejusticia, a Colombian human rights group. He has called for his clients to mobilize to prod the government to move ahead.

Most of the countries with constitutional protections of environmental rights are developing nations with newer constitutions, Boyd says. Many are still emerging from the legacies of colonialism or military dictatorship and struggling to deliver basic services to their citizens. Those factors increase the odds against a court ordering a climate remedy, say, that is actually enforced.

Even in Norway, where the constitution, which dates to 1814, is the world’s second-oldest after that of the United States, protected rights don’t always win the day. Norway’s constitution clearly details the right to a healthy environment and that it be “safeguarded for future generations.”

Yet a Norway court dismissed efforts by Nordic youth and two non-governmental organizations to prevent the government from granting licenses for oil and gas exploration in the Barents Sea. The plaintiffs had argued that the licenses would violate Norway’s commitment under the Paris climate agreement as well as the Norwegian constitution. Although the court agreed that the right to a healthy environment is a claimable right, it concluded that the licenses would not violate it.

“Sometimes judges make bad decisions. They said this can’t be a violation of Norway’s right to a healthy environment because the oil will be exported,” Boyd says. “This case has a chance on appeal, which will be heard this fall.”

The United States is one of 38 UN member states lacking expressly stated constitutional protections to a healthy environment. The youths say such language is not necessary for courts to find in their favor. They claim the federal government’s promotion of the production of fossil fuels and indifference to the risks posed by greenhouse gas emissions have created a “dangerous destabilizing climate system” that threatens their rights to life, liberty and property, which are contained in the Constitution. U.S. District Court Judge Anne Aiken agreed with their claim and ordered the case to be tried.

Recognizing environmental rights in that context would elevate the case into the realm of historic cases, including Brown v. Board of Education, the 1954 decision that declared segregation of public schools unconstitutional, and Roe v. Wade, the 1973 decision that recognized a constitutional right to access to abortion.

In arguments before a three-judge panel of the Ninth Circuit Court of Appeals earlier in June, Jeffrey Clark, a U.S. assistant attorney general, called the lawsuit a “dagger at the separation of powers.”

He added: “This is a suit that is designed to circumvent a whole bunch of statutes.”

In an animated, hour-long hearing, the three-judge panel conveyed their skepticism to both Clark and Julia Olson, the youths’ lead attorney.

“Look, you’re arguing for us to break new ground,” Judge Andrew Hurwitz told Olson. “I’m sympathetic to the problems you point out. But you shouldn’t say this is an ordinary suit… You’re asking us to do a lot of new stuff.”