A trifecta of dangerous conditions has primed southern Louisiana for an onslaught of flooding as the first big storm of 2019 approaches the coast.

Editor's note: Latest National Weather Service reports indicate that the expected storm surge from Barry on Friday was one foot and the Mississippi River crested at 17 feet, less than the 20 feet needed to overtop levees. The next surge is on Monday and will be fueled by the weekend's heavy rains from the storm, said the NWS. 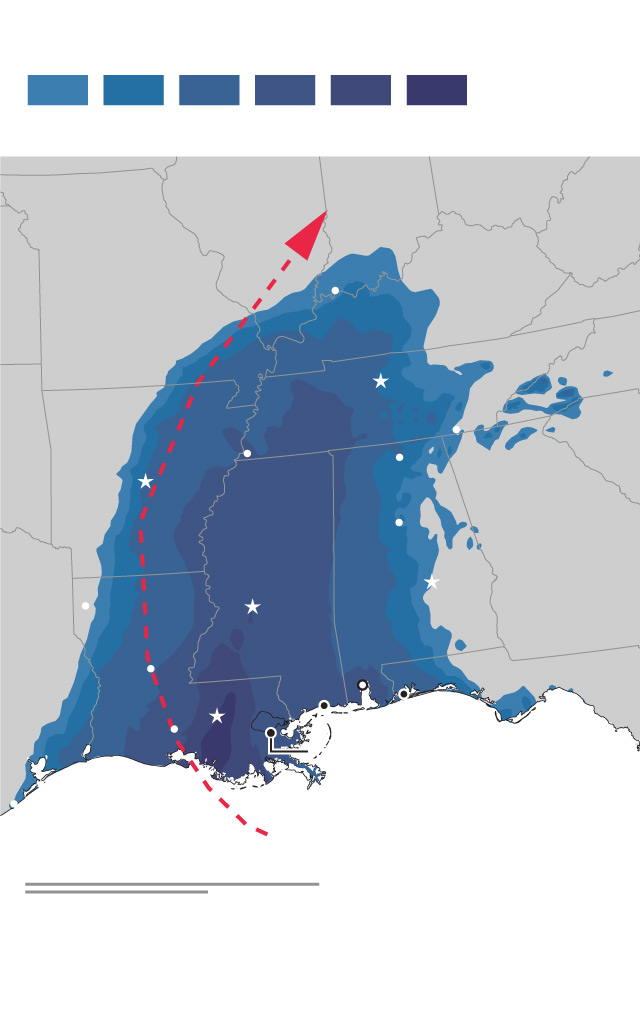 Predicted rainfall in next 5 days (inches)

Barry, the first storm of the 2019 hurricane season, is expected to make landfall in the New Orleans area on Saturday, bringing with it heavy rains and a storm surge that threaten to overtop the 20-foot levees protecting parts of the city.

If the surge doesn’t flood the city, then the possible 20 inches of rain that Barry is forecast to dump on the area could do it. In fact, thunderstorms associated with the outer bands of the storm turned New Orleans streets into rivers on Wednesday.

“If you get a couple of inches of rain an hour for several hours even the pumps can’t keep up,” says Mike Efferson, a meteorologist at the National Weather Service in New Orleans-Baton Rouge about Wednesday’s 8-inch rainfall. New Orleans has a world-class drainage system that uses 120 pumps to keep the city dry.

Following the devastation Hurricane Katrina brought to New Orleans in 2005, Congress approved a $14.5 billion upgrade to the city's flood defenses. Those easily withstood Category 1 Hurricane Isaac and its ten-foot storm surge in 2012.

Barry is expected to be a weak hurricane, not much more than a tropical storm on the Saffir-Simpson wind scale and pretty typical for July, according to Efferson. But there’s nothing typical about this year’s record flooding of the Mississippi River.

Southern Louisiana has been coping with nearly continuous flooding since February, following record rains in the Midwest. In fact, across the country the last 12 months have been the wettest in history.

“The Mississippi is currently 16 feet above sea level when it’d normally be 5 to 10 feet,” says Efferson in an interview.

The storm surge from Hurricane Barry will push water up the Mississippi, and it could reach 19 feet, overtopping the lower levees in Plaquemines Parish, south of the city, and very close to overtopping levees in New Orleans itself. The river’s flood stage makes predicting the overall height of the surge extremely challenging. And when combined with the 10 to 20 inches of rain forecast for Saturday, there potentially may be a “big event” Efferson said.

About 90 percent of fatalities from storms like Barry involve flooding and some people may see 20 to 25 inches of rain, said National Hurricane Center Director Ken Graham Friday morning. Barry is slow-moving storm that will bring up to 10 inches of rain over a a very large area, including most of the states of Louisiana and Mississippi.

Now add in rising sea levels. So-called “sunny day” or high-tide coastal flooding has doubled since 2000 on average around the U.S., according to a new National Oceanic and Atmospheric Administration technical report. By 2030, the western Gulf of Mexico—from Louisiana to Texas—will have up to 20 days with high-tide flooding and a whopping 165 days by 2050.