Experts explain the natural phenomena behind the storm, whether it’s connected to climate change, and how sea level rise plays a role.

A relatively quiet Atlantic hurricane season will end this weekend when Hurricane Dorian makes landfall in the U.S. on Monday afternoon.

The National Oceanic and Atmospheric Administration is predicting that Dorian will hit the central east coast of Florida as a Category 4 storm with 130 mph winds.

Hurricane Dorian is a meteorologically challenging storm to predict. Its relatively small size so far, and its position, mean it can quickly weaken or intensify—or change tracks altogether, experts say. 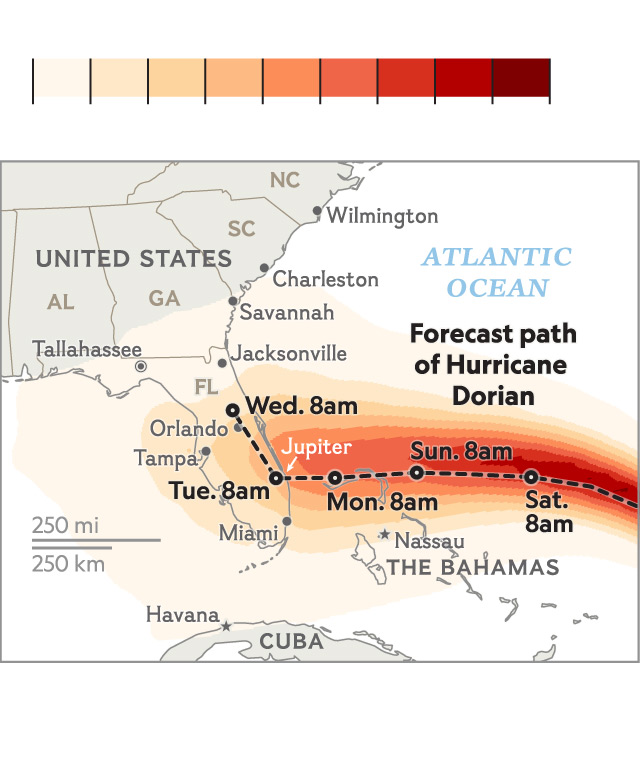 Chance of winds greater than 74 mph

As of Friday morning, Dorian was a Category 2 in the eastern Caribbean barreling toward the northern Bahaman Islands and central Florida.

Here’s what we know so far, and what experts think is likely.

What could happen on its path to Florida?

“Hurricanes move like pebbles in a stream,” says Philip Klotzbach, a meteorologist at Colorado State University. “If the winds at mid-level are weak, there’s not much to push the storm along.”

As the storm system moved through the Caribbean, it narrowly avoided some of the more mountainous regions that could have disrupted the storm’s momentum. The Caribbean Sea also houses a pocket of seasonal dry air at this time of year; leaving that dry air means the storm will be fueled and likely grow thanks to the warm, moist air in the Atlantic.

Dorian will also be influenced by a weather system called the Bermuda High, a high-pressure system that sits over the Atlantic throughout the summer and early fall. Klotzbach says the Bermuda High is forecast to expand southward and westward, and could act like a wall pushing Hurricane Dorian into the U.S. East Coast.

Prediction models pinpoint central Florida as the most likely place for the storm to make landfall, but there’s a small chance it could change course and travel up the East Coast.

“Pretty much anywhere from Florida to North Carolina could get it,” says Klotzbach.

What’s likely to happen when it strikes land?

The National Hurricane Center is forecasting a slow-moving storm that could linger over Florida for 24 hours before moving on and dissipating.

When hurricanes finally make landfall and stall, the impact of floods generated by the storm’s rainfall can be massive. As we saw with Hurricane Harvey in Houston in 2017 and Hurricane Florence in the Carolinas in 2018, stalled storms can lead to massive flooding. 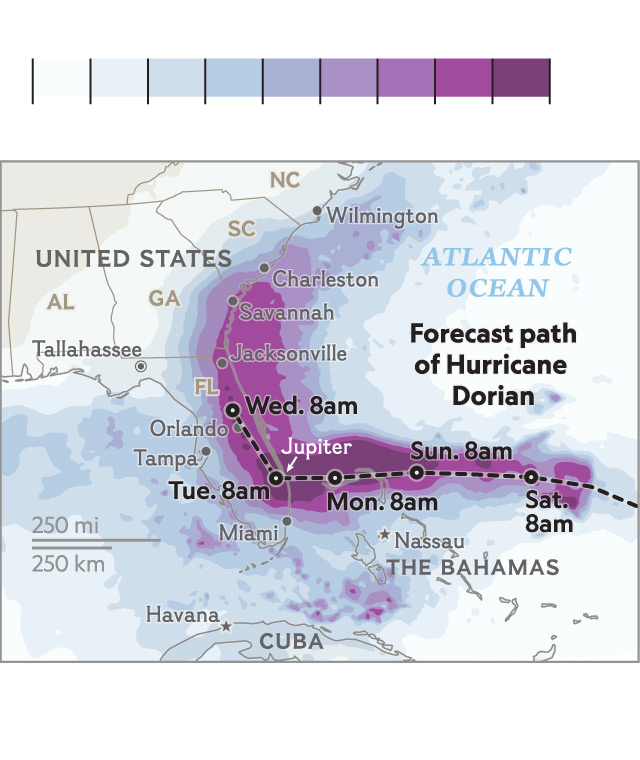 Forecast inches of rain over next 7 days

“If the storm slows down after landfall, that could dump a lot of rain. That will make things even worse,” says Jayantha Obeysekera, the director of the Sea Level Solutions Center at Florida International University.

He says recent rains have already saturated the amount of groundwater that can be absorbed in many parts of Florida. Storm surges will likely be worse because of a natural phenomenon called king tides, where tides are especially high when the moon is closest to Earth.

(Beyond nukes: how scientists dream of killing hurricanes.)

A large hurricane has not struck Florida’s Atlantic coast since Hurricane Andrew hit as a Category 5 storm in 1992. At the time, it was the costliest storm to ever strike the U.S.

Dorian is expected to hit as a Category 4 storm, meaning that the impacts may not be as catastrophic. But it will still cause damage.

In the 26 years since Hurricane Andrew, various parts of Florida have seen several inches of sea level rise. The rising waters likely won’t worsen what’s expected to be several feet of storm surge, says Obeysekera, but the hurricane’s impact could accelerate the coastal erosion.

So why hasn’t the east coast of Florida seen a major hurricane in 20 years?

Part of the reason may be due to a trend called Atlantic multidecadal oscillation, a natural cycle of warming and cooling thought to occur in the Atlantic Ocean on a roughly 20- to 40-year cycle. The oscillation could explain why Florida saw a spate of major hurricanes in the 1940s, Andrew in 1992, and now potentially Dorian.

“The other issue is that climate-change predictions are such that we could have stronger storms, and that’s also a factor,” says Obeysekera.

Experts caution against linking any one storm to climate change, but recent studies show that warming waters could make hurricanes more intense, slower, and more likely to cause major flooding.

By Sunday morning, Floridians could begin to see high winds and storm-like conditions. Though strong winds can cause major damage, sudden storm surge and flooding contribute most to injury and death.

(Here are the hurricane safety tips you need to know.)

The National Hurricane Center will be regularly updating its predictions here and on Twitter.