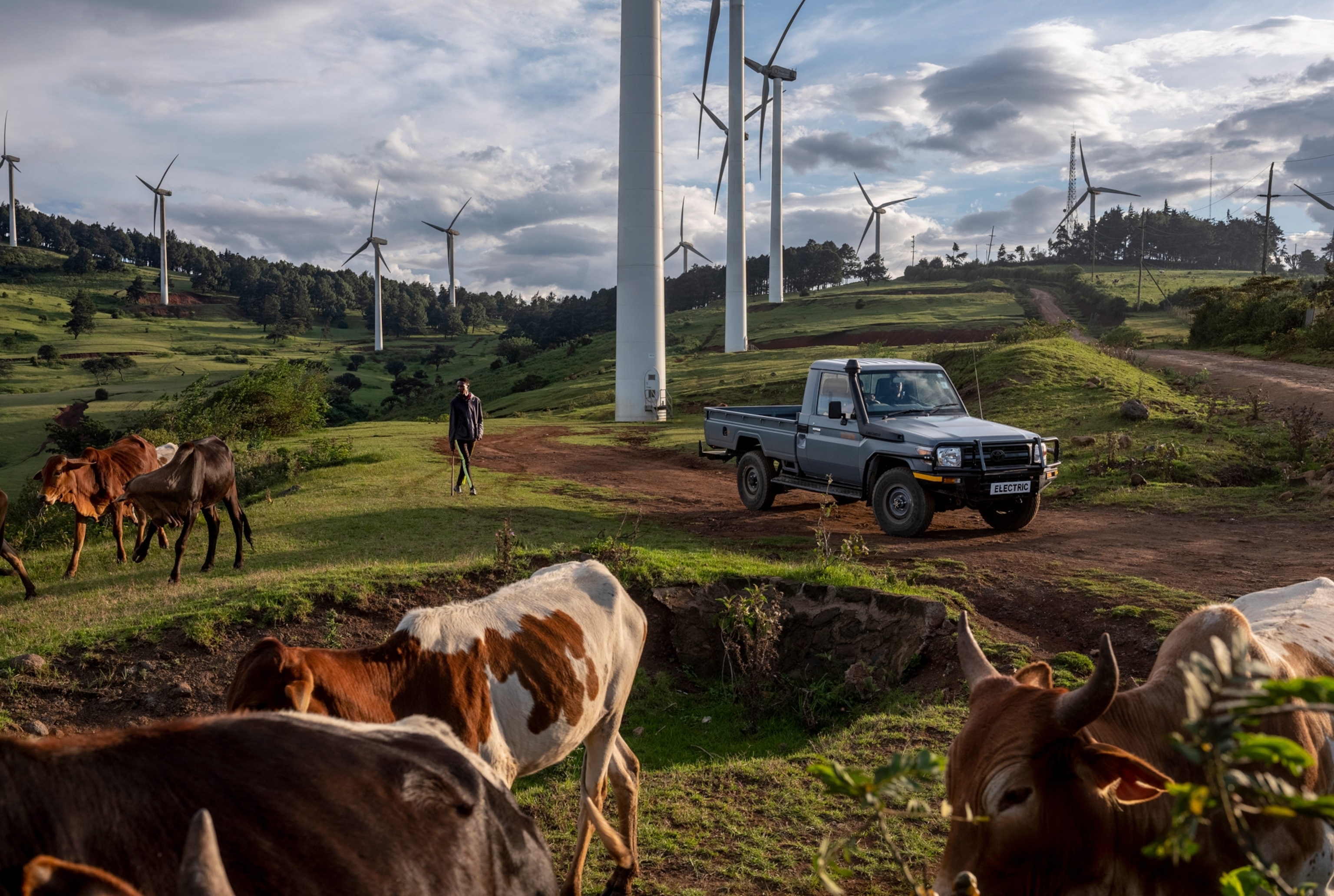 5 environmental victories from 2021 that offer hope

In a year of seemingly continuous bad news, there are many reasons to be hopeful about the environment.

An electric-converted Toyota Land Cruiser gets a test drive at Ngong Hills Wind Power Station in Kenya. Electric vehicle use is on the rise as countries get serious about cutting fossil-fuel emissions.
Photograph by Nichole Sobecki, National Geographic

It’s easy to feel despondent about the state of the global environment in 2021. More than a million species are at risk of extinction, levels of carbon dioxide in the atmosphere continue to increase, and the planet was rocked by a series of climate change-fueled extreme weather events. Meanwhile, the world continues to grapple with a deadly pandemic that seems like it will never end.

But, as the year draws to a close, there are reasons to feel cautiously optimistic about areas in which the environment scored victories in 2021.

It’s important to note that even these promising developments involve pledges that may yet be watered down, misleading, or altogether unfulfilled. Still, there are signs of success on this long, difficult road. Here are five reasons to be hopeful.

Delayed by a year as a result of COVID-19, November’s COP26—the United Nations Climate Change Conference, held in Glasgow—welcomed the world’s second-largest fossil-fuel emitter, the United States, back to the negotiating table after four years of inaction on climate change. By the summit’s end, the U.S. and China had made a surprise joint declaration to work together on meeting the goals of the Paris Agreement.

While the level of ambition at Glasgow faced plenty of criticism, particularly in terms of protecting developing countries from climate impacts and supporting their transitions to clean energy systems, the goal of keeping warming to 2.7°F (1.5°C) is arguably more achievable now. Notably, countries agreed to “phase down” their coal use—which fell short of an initial draft to “phase out” coal—and more than a hundred countries agreed to cut their methane emissions 30 percent by 2030.

Away from Glasgow, the Biden administration canceled the controversial Keystone XL pipeline and suspended oil drilling leases in the Arctic National Wildlife Refuge, though it is also opening up millions of acres to oil and gas exploration. The administration set a goal of generating 30 gigawatts of offshore wind by 2030 and announced its intention to reduce solar energy costs 60 percent over the next decade; the two declarations are part of a plan to have the U.S. powered by a clean grid by 2035. In addition, President Joe Biden in August mandated that by 2030, half of all new vehicles sold in the U.S. be electric.

Globally, renewable energy use in 2021 is expected to increase by 8 percent, the fastest year-on-year-growth since the 1970s, while in the U.S., a new report found that it had nearly quadrupled over the last decade.

In the Netherlands, a court ordered Royal Dutch Shell to reduce its carbon emissions by 45 percent relative to 2019 levels by 2030, a result one lawyer described as a “turning point in history.”

The last 12 months saw a raft of legislation to reduce growing plastic pollution. In Washington State, Governor Jay Inslee signed a law that bans polystyrene products, such as foam coolers and packing peanuts; requires that customers must request single-use utensils, straws, cup lids, and condiments; and mandates minimum post-consumer recycled content in a number of plastic bottles and jugs, including those for personal care products and household cleaning.

California passed landmark bills that, among other things, prohibit manufacturers from placing the “chasing arrows” recycling symbol or the word recyclable on items that aren’t actually recyclable; forbid mixed plastic waste exports to other countries being counted as “recycled,” just so that local governments can claim to comply with state laws; require products labeled as compostable to break down in real-life conditions; and ban the use of extremely long-lasting PFAs, known as forever chemicals, in children’s products.

Such actions may be reflected federally following the introduction of the Break Free from Plastic Pollution Act; among other things, the proposal by two U.S. lawmakers would ban some single-use plastic products and pause permits of new plastics manufacturing plants.

In November, U.S. Secretary of State Anthony Blinken announced that the U.S. would back a global treaty to tackle plastic pollution; the Trump administration opposed it. U.S. support is critical, given that the nation is the world’s largest contributor to plastic waste, as revealed in a congressionally mandated report released in December. The treaty now seems certain to move forward, and the United Nations is scheduled to convene in Nairobi in February to begin formal negotiations.

In December, the National Academies of Sciences urged the U.S., which generates more plastic waste than all the European Union states combined, to develop a strategy to reduce it, including a national cap on virgin plastic production.

By far the biggest news in forest conservation was the pledge at the UN Climate Conference in Glasgow to end deforestation by 2030; the commitment includes a pledge to provide $12 billion in funding to “help unleash the potential of forests and sustainable land use.” However, the promise was met with widespread skepticism, not least because deforestation rates actually increased following a 2014 agreement with the same goal.

However, 2021 did see a number of on-the-ground victories. In October, President Felix Tshisekedi of the Democratic Republic of Congo called for an audit of its vast forest concessions and the suspension of all “questionable contracts” until the audit is done. A few weeks later, the government retreated from a plan to lift a 19-year-old moratorium on the granting of new logging licenses in the Congo Basin Forest. “We don’t want any more contracts with partners who came to savagely cut our forests; we will retire these types of contracts,” said Environment Minister Eve Bazaiba. Environmental groups remain wary, and Greenpeace is calling for the DRC moratorium to be made permanent.

The government of the Indonesian province of West Papua revoked permits for 12 palm oil contracts covering more than 660,000 acres (an area twice the size of Los Angeles), three-fifths of which remains forested. Environmental and Indigenous rights groups are urging the government to go further and recognize the rights of Native peoples in those areas to manage the forests themselves. Three of the 12 contract holders continue to fight the government’s decision in court.

And Ecuador’s highest court has ruled that plans to mine for copper and gold in a protected cloud forest would harm its biodiversity and violate the rights of nature, which are enshrined in the Ecuadorian constitution. The ruling means that mining concessions, and environmental and water permits in the forest, must be cancelled.

The Biden administration spent part of its first year restoring habitat protections that had been rolled back by its predecessor. Perhaps the most prominent was the re-establishment of full protection for the Bears Ears and Grand Staircase-Escalante monuments in southern Utah, as well as the Northeast Canyons and Seamounts National Monument off New England.

The administration restored protection to more than 3 million acres of old-growth forest in the Pacific Northwest that is critical habitat for the northern spotted owl. It also reversed an effort to weaken the Migratory Bird Treaty that the Trump White House set in motion in its last few days in office. Meanwhile, a court overturned a Trump administration decision to strip protections from 10 million acres, mostly in Nevada and Idaho, to allow mining in critical habitat for greater sage-grouse.

In May, the Biden administration unveiled its America the Beautiful initiative, which among other things established the first-ever national conservation goal: conserving 30 percent of U.S. lands and waters by 2030. It reflects a United Nations aim to protect the same percentage of land and ocean, an objective to which more than 100 nations committed in September.

In November, Colombia pledged to protect 30 percent of its land by 2022. And Panama took major steps toward the same goal by tripling the size of its Cordillera de Coiba Marine Protected Area. Also in November, Portugal established the largest fully protected marine reserve in Europe.

Populations of some of the world’s most iconic species are showing some improvement as a result of protective measures. In July, China announced that it no longer considers the giant panda, the symbol of the World Wildlife Fund, to be endangered, upgrading its status to vulnerable. Just over 1,800 pandas remain in the wild, an improvement over the 1,100 thought to live in the wild as recently as 2000. Meanwhile, China announced the creation of the Giant Panda National Park, part of a system of new parks that will cover an area nearly the size of the United Kingdom.  The parks are designed to protect native species such as the Northeast China tiger, Siberian leopard, and the Hainan black-crested gibbon.

Humpback whales, whose haunting songs helped build support for the “Save the Whales” campaign that ushered in the modern environmental movement, are increasing in number in many parts of their range, including off Australia (where the government is considering removing them from the country’s threatened list) and in their South Atlantic feeding grounds. That said, the number of calves in the Northwest Atlantic population has declined over the last 15 years.

Several species of tuna are no longer heading toward extinction, according to the International Union for Conservation of Nature. Two bluefin species, a yellowfin, and an albacore are no longer classified as critically endangered or have moved off the leading international list of endangered species entirely, the result of decades of efforts to limit the impacts of commercial fishing.

Three thousand years after the species was eliminated everywhere except its eponymous island, seven Tasmanian devils were born in a reserve in mainland Australia. Scientists hope that if the marsupials one day again become established on the mainland, they could play a vital role in controlling invasive species.

And in the U.K., a government report concluded that lobsters, crabs, and octopuses are sentient beings that feel pain, and as a result should be granted protection under the country’s draft Animal Welfare (Sentience) Bill.